The Paradox of “Eyes on the Street”: Pedestrian Density and Fear of Crime in Yaoundé, Cameroon

Most studies highlighting the link between the urban environment and fear of crime (FoC) have focused on less populated spaces in urban areas, and concluded that the presence of activities and people in a space makes its users more confident. This study analyses the paradoxical phenomenon of FoC in occupied public spaces in the setting of Yaoundé, Cameroon. To this end, this study analyses the relationship between intersection level, pedestrian density and perceived FoC. The results of the multi-level binary logistic regression demonstrate that women, vulnerable age groups, people with a weak sense of community and high-income people tend to express a higher level of FoC. Among the major FoC theories, these results confirm the theories of physical vulnerability and social networks and invalidate the theory of social vulnerability in the local context. The results also reveal that the relationship between “pedestrian density” and FoC seems to be a convex curve with the minimum value, implying that the concept of ‘eyes on the street’ is not valid in places where pedestrian density exceeds a specific threshold. This suggests that policy makers and planners should consider pedestrian density when designing public spaces, not only to secure wellbeing, but also due to the impact it can have on perceived FoC among those who use such spaces. View Full-Text
Keywords: street life; pedestrian density; fear of crime; quality of life; density threshold theory street life; pedestrian density; fear of crime; quality of life; density threshold theory
►▼ Show Figures 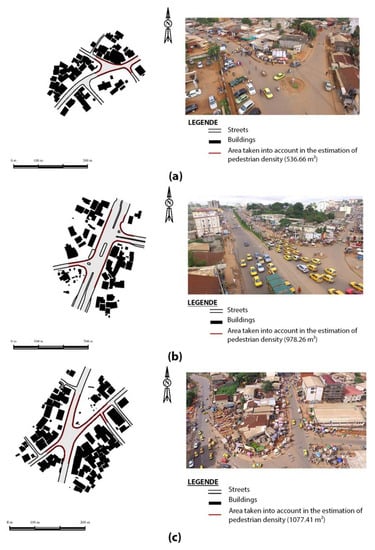