The Moderating Effect of R&D Investment on Income and Carbon Emissions in China: Direct and Spatial Spillover Insights

There is presently no commonly accepted indicator system for evaluating trade facilitation. Meanwhile, what trade facilitation may entail has continued to expand with the development of e-commerce and financial services. According to TFA (Trade Facilitation Agreement), the evaluation indicators of trade facilitation should include transparency of trade regulations, charges and procedures of import and export, release and clearance of goods, formalities of import and export, and transit freedom and customs cooperation [5]. Considering relevant regulations of TFA and combining the ideas of Wilson et al. and Kong et al., we selected four first-level indicators including port efficiency, customs environment, regulation environment, and finance and e-commerce, and decomposed these four indicators into seventeen second-level indicators to measure trade facilitation of countries along the “Belt and Road” [11,32]. This system is shown in Table 1.

(1)
Port efficiency: This indicator reflects the construction of traffic infrastructure and transport efficiency, and consists of four second-level indicators (respective qualities of roads, railways, ports and airports). A higher score represents better infrastructure and higher port transportation efficiency, which are conducive to the development of international trade.
(2)
Customs environment: This indicator measures the cost of customs clearance, customs procedures, and transit management transparency, and consists of two second-level indicators (prevalence of trade barriers, and burden of customs procedures). A higher score means lower costs of customs clearance and more convenient customs procedures, which are helpful to promote trade and foreign direct investment.
(3)
Institutional environment: This indicator reflects institutional environment related to trade, such as policy transparency and judicial efficiency, and consists of six second-level indicators (corruption perceptions index, public trust in the government behavior, judicial independence and so on). A higher score signifies more transparent policy environment and higher governance efficiency, which are beneficial to provide good policy incentives for international trade.
(4)
Finance and e-commerce: This indicator measures the convenience of financial services and the development of e-commerce, and consists of five second-level indicators (convenience and affordability of financial services, availability of new technology and so on). A higher score denotes more mature financial markets, and wider application of new technologies and e-commerce, which may provide a good platform of financial services and technical support for international trade.

Assuming that the implementation of trade facilitation measures would have an impact on the ternary margins of forest products export growth, we introduced the trade facilitation indicators into the extended gravity model. We also took the economic development characteristics of 13 countries along the “Belt and Road” into account and incorporated Shanghai Cooperation Organization (SCO), China-ASEAN (Association of Southeast Asian Nations) Free Trade Area (CAFTA) and Asia-Pacific Economic Cooperation Organization (APEC) as policy dummy variables. The models are set up as follows: where i represents China and j represents 13 countries along the “Belt and Road”. denote the extensive, intensive, quantity and price margins of China’s export growth to country j respectively. represents the trade facilitation of country j. The improvement of trade facilitation in target countries can reduce the cost of trade and promote the export growth of ternary margins. is the gross domestic product of country j. Higher GDP suggests a country has more appetite for imports, which is beneficial to the growth of ternary margins. is the total population of country j. A larger population means a bigger market. However, it may also imply deeper domestic division of labors, which reduces the quantities and types of trade demands, and in turn lowers the extensive and quantity margins. is the geographical distance between China and country j, and is the dummy variable of whether two countries are adjacent to each other. The further the distance, the higher the transportation costs between the two countries, which lowers the extensive and quantity margins, and raises the price margin. represents the economic openness of country j. The more open a target country is, the more favorable it is to develop bilateral trade and promote the growth of ternary margins. However, openness may also have an adverse impact on China’s export growth due to the increase of alternative countries from which the target country imports. stands for the exchange rate between country j and China. Devaluation is conducive to increase the quantity margin, but may reduce the price margin. indicates whether China and country j have signed a free trade agreement. , and denote whether country j participates in the Shanghai Cooperation Organization, China-ASEAN Free Trade Area or Asia-Pacific Economic Cooperation organization. Bilateral free trade agreements and regional economic integration organizations could reduce trade costs by lowering trade barriers and eliminating restrictions on the flows of goods and factors. As a result, export diversity would be expanded, so the extensive margin and quantity margin would increase, while price margin would decrease. is the constant term, , … are elastic coefficients, is the unobservable random variable, and is the random error. The specific explanatory variables are shown in Table 4.

J.Z. performed calculation, analyzed the data and wrote the paper. F.L. verified and solidified the argument, edited the paper and drafted the conclusions. Y.L. and B.C. revised the manuscript during the whole writing process. All authors contributed to the drafting of the article and read the final manuscript. 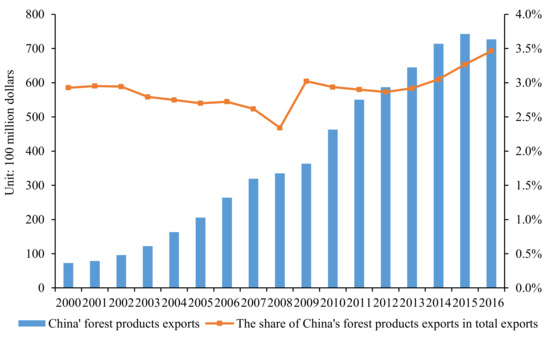 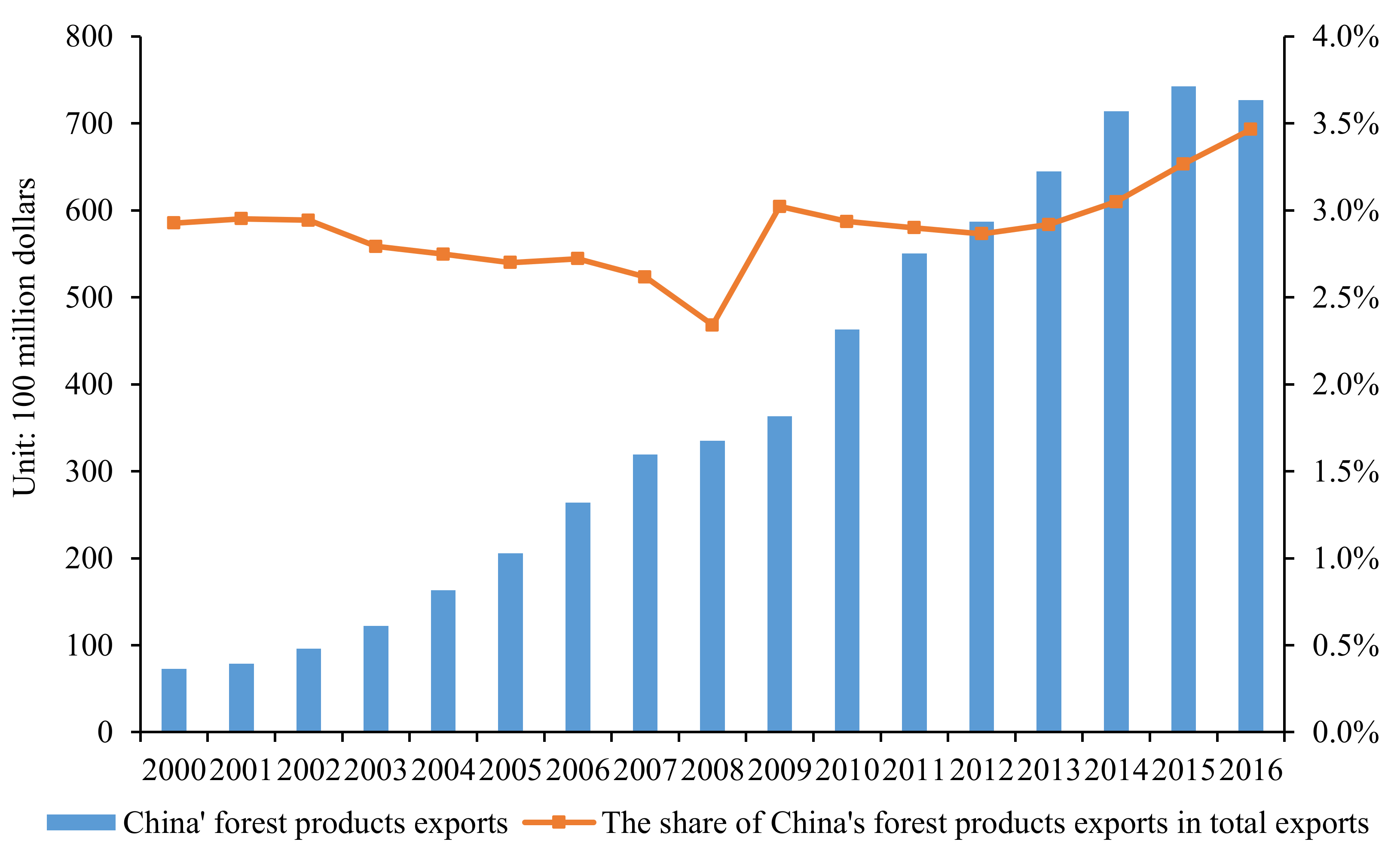 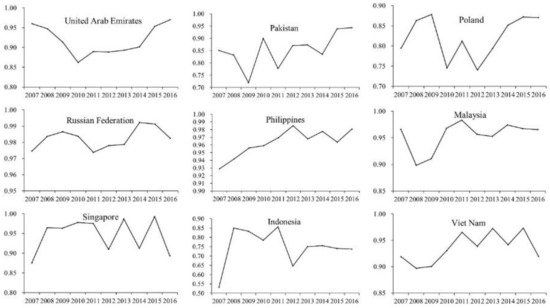 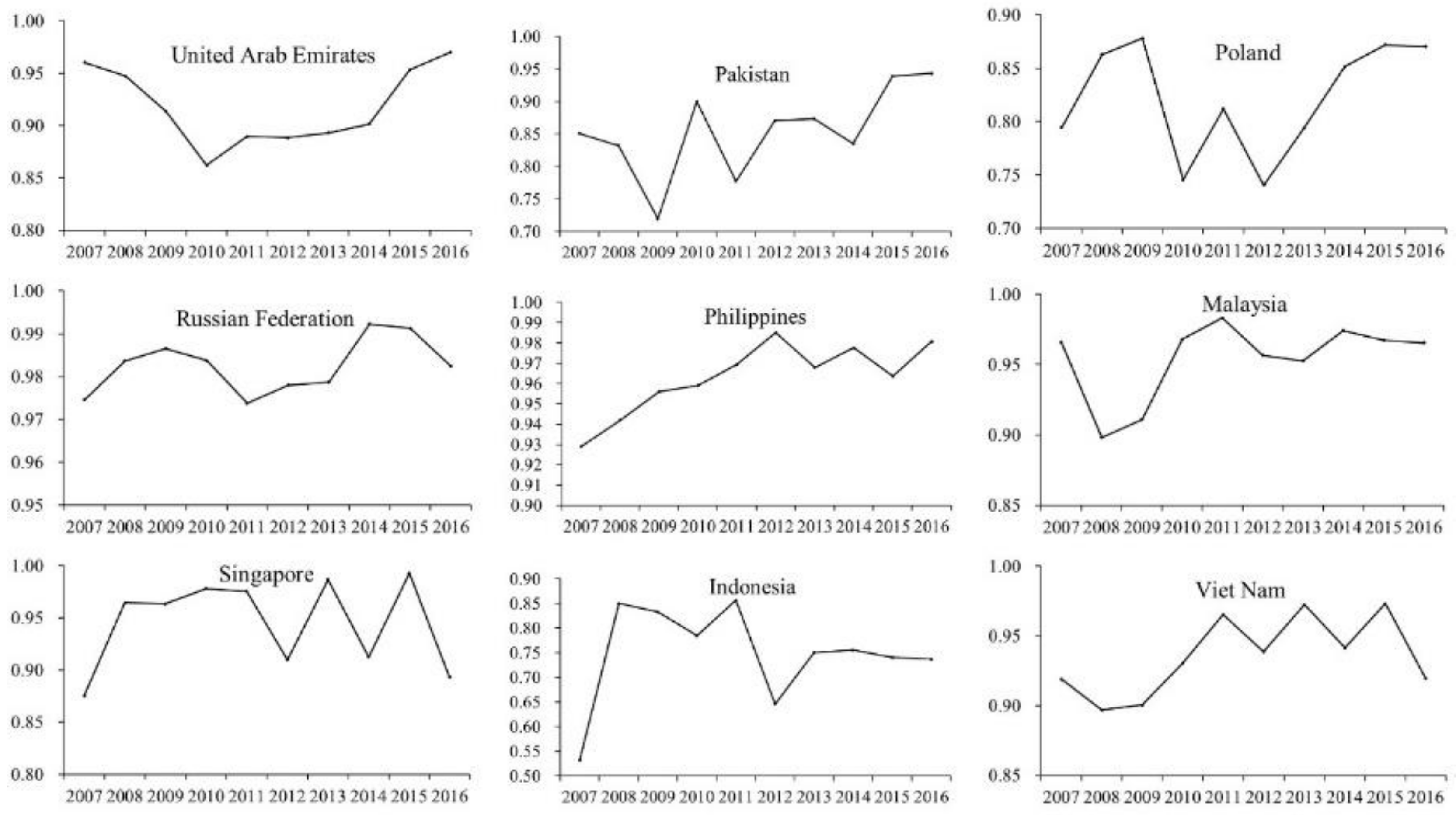 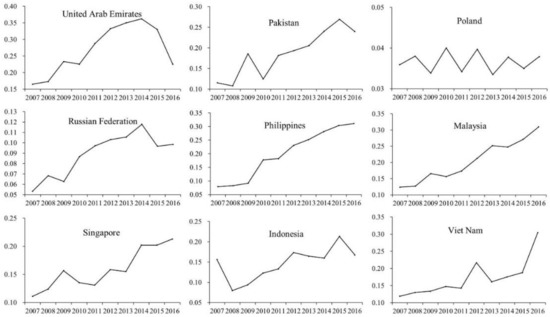 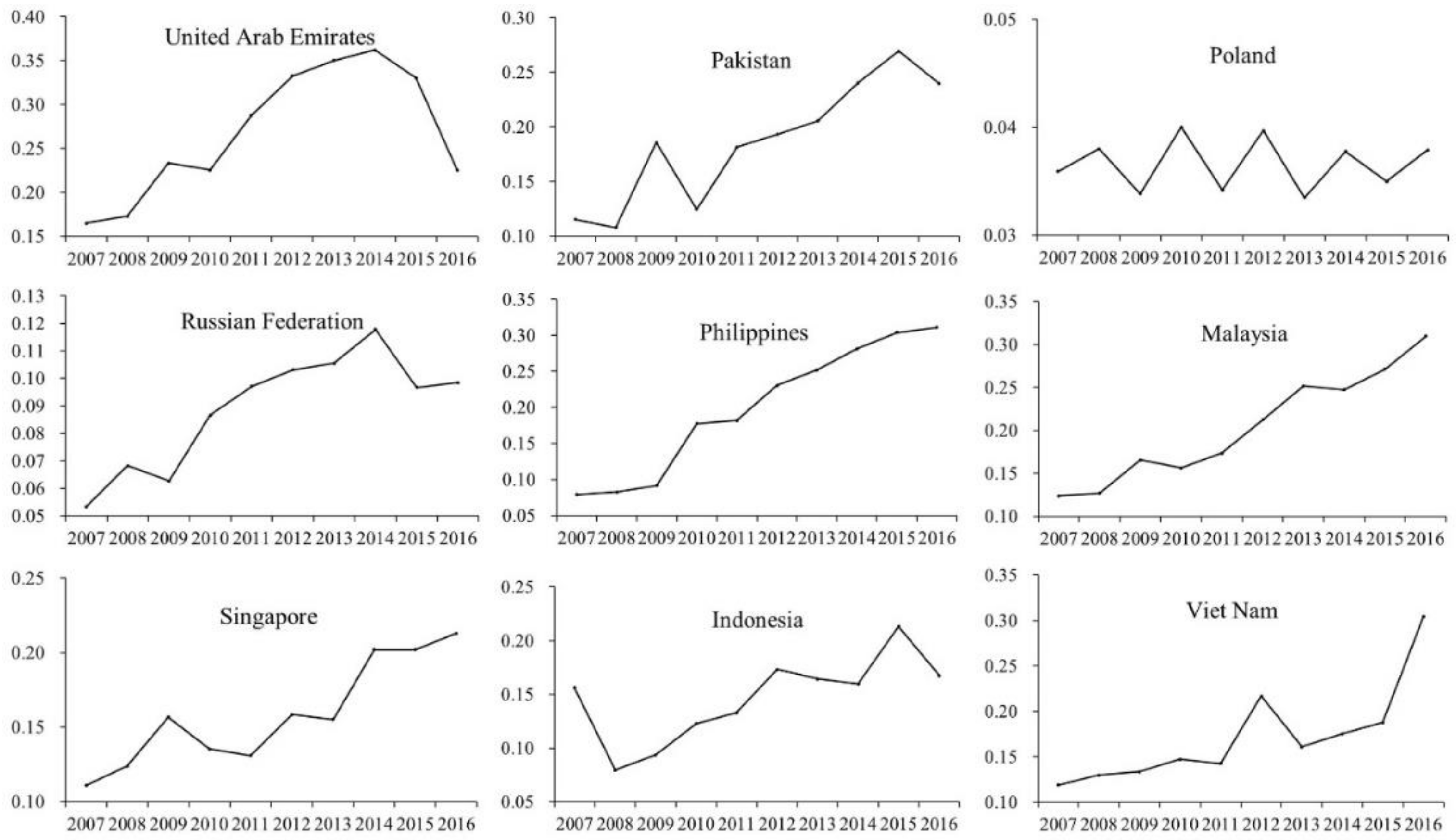 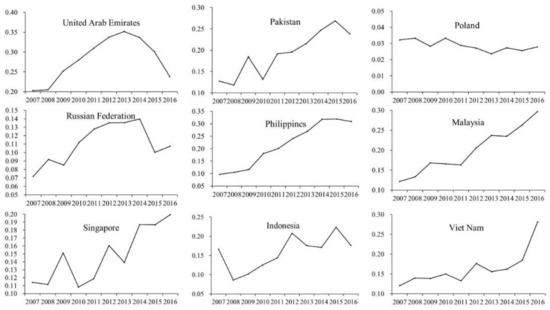 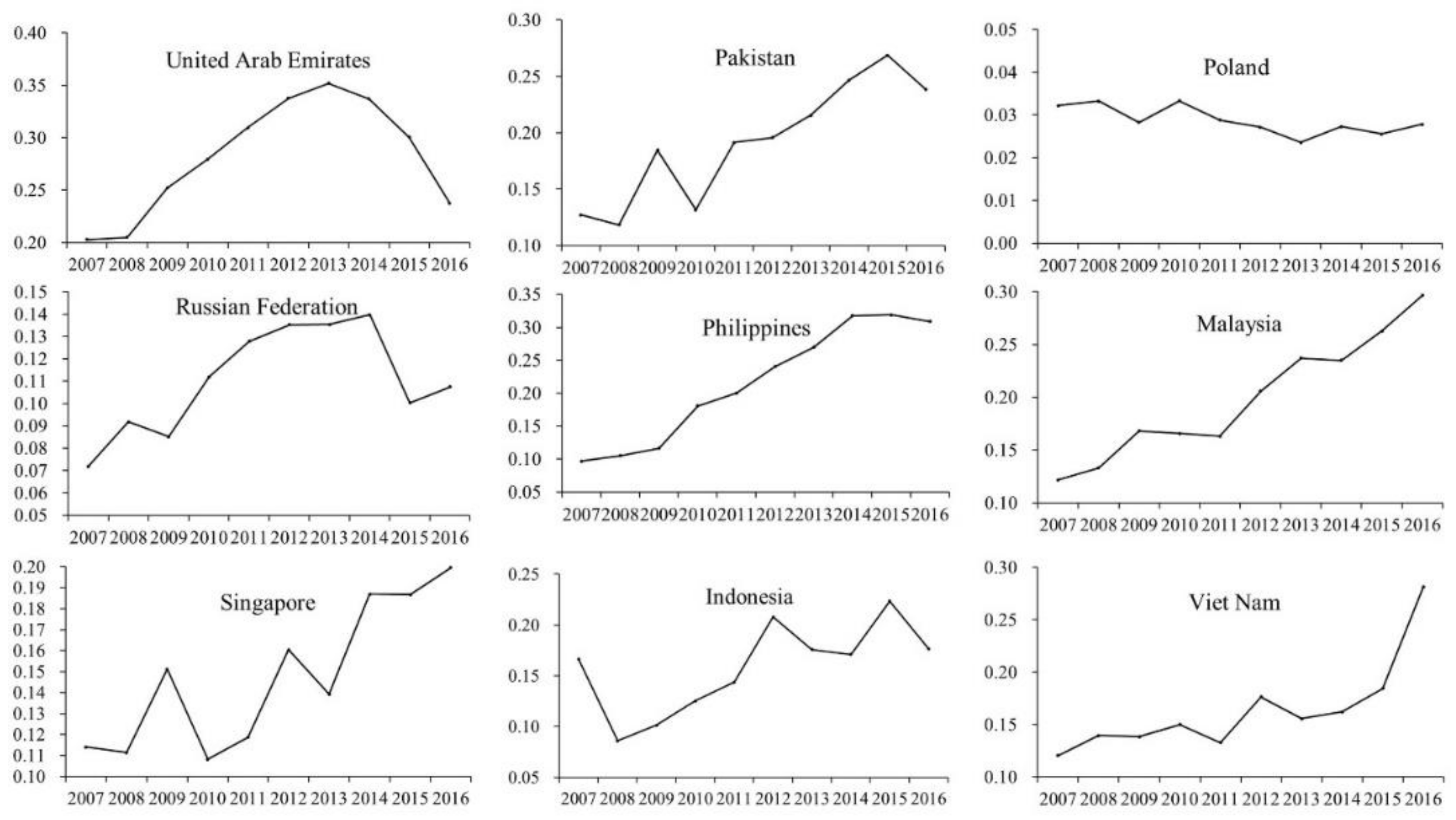 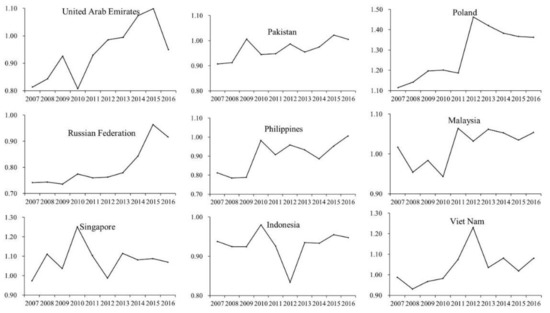 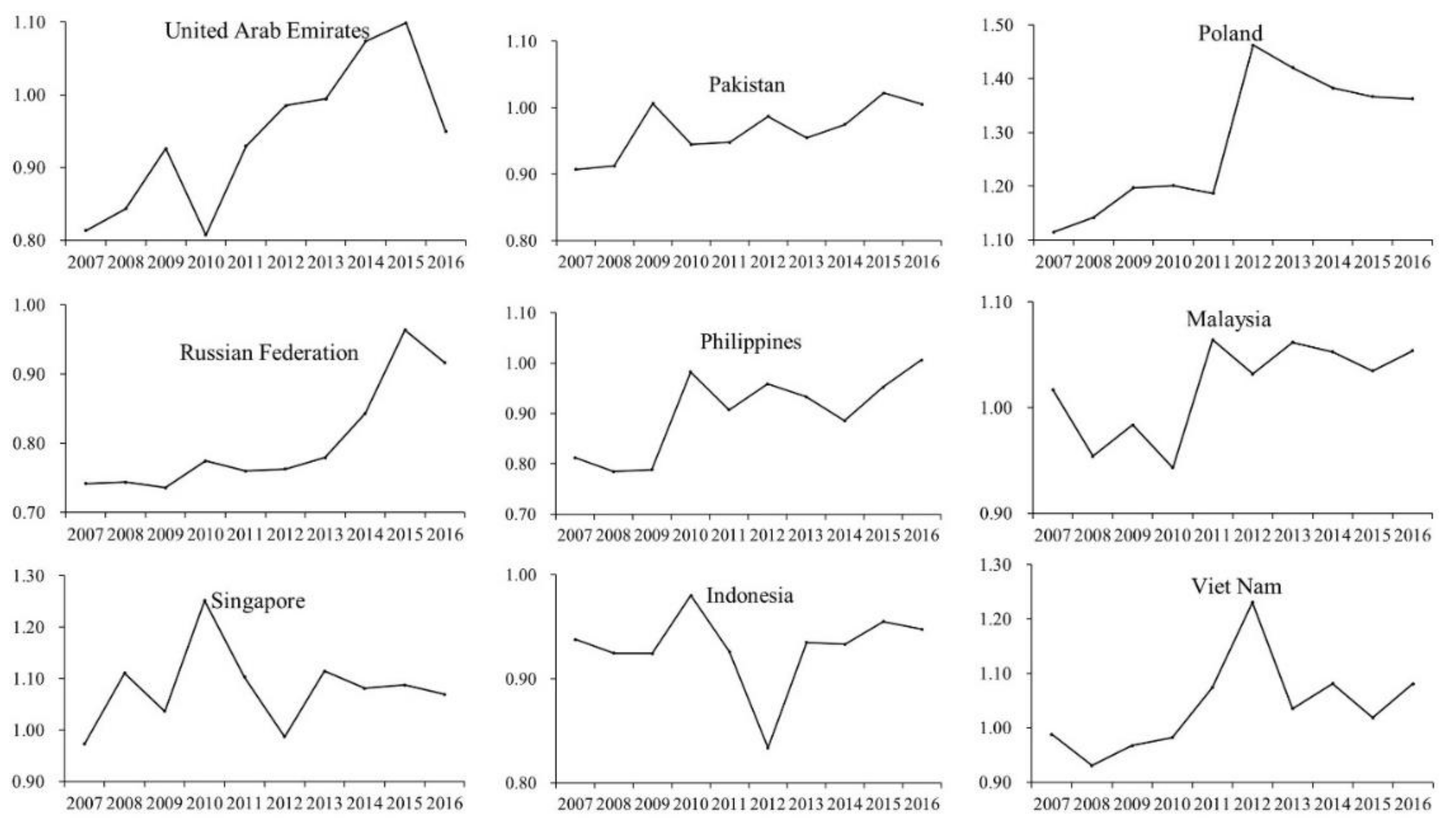