How does the Built Environment Influence Public Transit Choice in Urban Villages in China?
Previous Article in Special Issue

Sea environments harbor a wide variety of life forms that have adapted to live in hard and sometimes extreme conditions. Among the marine living organisms, extremophiles represent a group of microorganisms that attract increasing interest in relation to their ability to produce an array of molecules that enable them to thrive in almost every marine environment. Extremophiles can be found in virtually every extreme environment on Earth, since they can tolerate very harsh environmental conditions in terms of temperature, pH, pressure, radiation, etc. Marine extremophiles are the focus of growing interest in relation to their ability to produce biotechnologically useful enzymes, the so-called extremozymes. Thanks to their resistance to temperature, pH, salt, and pollutants, marine extremozymes are promising biocatalysts for new and sustainable industrial processes, thus representing an opportunity for several biotechnological applications. Since the marine microbioma, i.e., the complex of microorganisms living in sea environments, is still largely unexplored finding new species is a central issue for green biotechnology. Here we described the main marine environments where extremophiles can be found, some existing or potential biotechnological applications of marine extremozymes for biofuels production and bioremediation, and some possible approaches for the search of new biotechnologically useful species from marine environments. View Full-Text
Keywords: extremophiles; extremozymes; biofuels; bioremediation; microwave; satellite remote sensing extremophiles; extremozymes; biofuels; bioremediation; microwave; satellite remote sensing
►▼ Show Figures 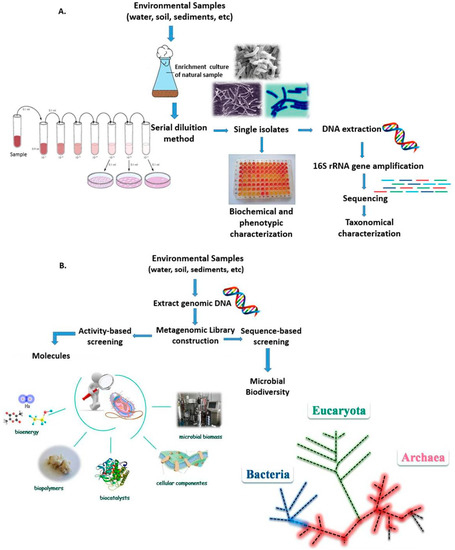 
Di Donato P, Buono A, Poli A, Finore I, Abbamondi GR, Nicolaus B, Lama L. Exploring Marine Environments for the Identification of Extremophiles and Their Enzymes for Sustainable and Green Bioprocesses. Sustainability. 2019; 11(1):149. https://doi.org/10.3390/su11010149