:
Solar irradiance measurement is a key component in estimating solar irradiation, which is necessary and essential to design sustainable energy systems such as photovoltaic (PV) systems. The measurement is typically done with sophisticated devices designed for this purpose. In this paper we propose a smartphone-aided setup to estimate the solar irradiance in a certain location. The setup is accessible, easy to use and cost-effective. The method we propose does not have the accuracy of an irradiance meter of high precision but has the advantage of being readily accessible on any smartphone. It could serve as a quick tool to estimate irradiance measurements in the preliminary stages of PV systems design. Furthermore, it could act as a cost-effective educational tool in sustainable energy courses where understanding solar radiation variations is an important aspect.
Keywords:
smartphone; solar irradiance; smart devices; photovoltaic; solar irradiation

Solar irradiation is the total amount of solar energy falling on a surface and it can be related to the solar irradiance by considering the area under solar irradiance versus time curve [1]. Measurements or estimation of the solar irradiation (solar energy in W·h/m2), in a specific location, is key to study the optimal design and to predict the performance and efficiency of photovoltaic (PV) systems; the measurements can be done based on the solar irradiance (solar power in W/m2) in that location [2,3,4]. The performance of a PV system, module or array depends on many factors, one of which is the solar irradiance the solar panels receive during the day (peak sun-hours) [3,4,5]. There are devices specifically designed to measure solar irradiance, such as the pyranometer and the irradiance meter [2,3,6,7,8,9]. These devices can measure irradiance with high accuracy and cover a wide spectral range. These devices can be expensive and sometimes need special installation prior to the measurement. Therefore, cost-effective tools are needed to estimate the solar irradiance especially in the preliminary design stages. Recently, smartphones (smart devices) have not only served in communications and media, but also have been used for multiple scientific purposes such as teaching [10,11], medical care [12,13], environment [14] and agriculture [15]. The broad range of applications for smart devices comes from the different sensors embedded in them, such as an accelerometer, a digital compass, a gyroscope, a global positioning system (GPS), a microphone and a camera. Smartphone sensors have been widely used in research and education for scientific and educational experiments. For example, a survey has been done by Reese Bomhold [16] on mobile phone applications for undergraduate university students. The accelerometer sensor has been used to study the simple pendulum phenomena and harmonic oscillations [17,18,19,20]. In addition, the smartphone acceleration sensors were used to quantitatively analyze a system of coupled oscillators [21]. Furthermore, the smartphone ambient light sensor has been used to study a system of two coupled springs [22]. The rotation sensors have been used to study the conservation of angular momentum, non-conservation of rotational kinetic energy [23], rotational energy in a pendulum [24], and the relation between angular velocity and centripetal acceleration [25,26]. In addition, the Coriolis acceleration was measured using the gyroscope and accelerometer sensors in a smartphone [27]. The applications of these sensors are not limited to mechanics. They also have been used to study different phenomena in magnetic fields [28,29,30,31,32,33], ultraviolet solar radiation [34,35,36,37,38], and measurements of solar current [39]. Mei et al. used the smartphone to measure the ultra-violet radiation (UV) and results were compared with a digital UV meter to validate the usage of the sensor on a smartphone [34]. Wilkes et al. have discussed the possibility of using the smartphone sensor as a UV camera system [40,41]. Finally, Gutierrez-Martinez et al. discussed the possibility of using smartphone devices for light measurements in a case study. Their study showed that the measurements were acceptable if high-precision data is not required but it can be a good reference in comparison with high professional devices that are designed for this type of measurement [42].
The smartphone camera can be used as an irradiance measurement tool, provided that a certain application is downloaded on the device for this specific purpose. In this work, the smartphone’s camera, along with a mechanical setup, is used to validate the usability of smartphone for measuring solar irradiance. It can serve as a quick method to give an indication of how a PV system will perform in a certain area in the preliminary design stages. In addition, this work can be used as an educational tool to help students understand the solar irradiance variability during the day and its relation to other design parameters. The measurements are taken by a smartphone and compared with those acquired by a digital solar irradiance meter. The practicality of the presented work is demonstrated by studying the relation between the solar irradiance and the incident angle, hour of the day, and tilt angle.

As the objective of this experiment is to demonstrate the use of smartphones in measuring the solar irradiance for the purpose of education and scientific experiments, we have used two types of instruments for measuring the solar irradiance. The first one is a solar irradiance meter of model Solar Survey 200R from SEWARD that has been calibrated by the manufacturer, which is one of the high technology instruments that are used in the solar radiation measurements. These measurements are used to determine the usability of a certain area for photovoltaic systems and thermal installation. This model has a photovoltaic reference cell of wavelength response between ~0.3 and 1.2 μm [43], a solar irradiance measurement range of 100–1250 W/m2, and a resolution of 1 W/m2. Also, there is a built-in compass of 0–360° range and 1° resolution [6]. The cost of this irradiance meter is in the range of a couple of thousand dollars. The data taken with this model was used to validate the measurements taken by a smartphone. An application called “Pyranometer App 2.0” by Hukseflux Thermal Sensors [44], has to be downloaded to the smartphone before proceeding to the measurement section. The application is free and can be downloaded from the App store [45] or an equivalent one can be found in Google Play [46]. A diffuser also has to be placed on top of the camera, as seen in Figure 1. The diffuser allows for a full-sky field of view while the camera alone has a 30-degree field of view. The application can store all the measurements such as the irradiance in W/m2, date and local time of measurement, latitude and longitude.
A mechanical setup, shown in Figure 2, is proposed to help with the required measurements. It consists of a freely-rotating platform where the smartphone will be attached. The whole platform and the cross bar can be rotated horizontally. There is also a compass attached at the top for reference. This setup has been made in the workshop and has already been used in our previous work [31], which contains more details about the setup. When the platform rotates vertically, it changes the tilt angle and the incident angle. The objective of this experiment is to validate our use for smartphones as a tool for solar irradiance measurement.
The procedure of this experiment is as follows:
Figure 4 shows a schematic diagram that illustrates the incident ray of the solar radiation on the surface with surface azimuth angle (γ) equal to zero. In this figure, N = North, S = South, and E = East, β is the tilt angle; θi is the angle of incidence between the sun ray and the normal to the surface.
The solar incidence angle can be calculated according to reference [1]. The incident angle, for a surface tilted in such way facing south, is given by: where is the solar declination angle, is the geographic latitude, and is the hour angle. All measured in degrees.

In this paper, we presented a method for solar irradiance measurement, which takes advantage of smartphones’ widespread use and availability. We proposed two experiments to validate our method. The first one is to quantify how the solar irradiance changes and how the angle of incidence changes during the day. The measurements were also taken by an irradiance meter for comparison. The second experiment uses a mechanical setup, which allows the smartphone to rotate vertically to show the solar irradiance dependence on the tilt angle. The mechanical setup is also accessible and can be built in the workshop with low-cost materials. The proposed method has a lower accuracy than a typical irradiance meter. However, it is very reliable to indicate change in irradiance and its variability when we change different parameters. Also it is cost-effective and easily accessible to anyone who owns a smartphone. It could also serve as a great educational tool to understand solar irradiance variability and the interaction between different parameters in PV solar panels design. 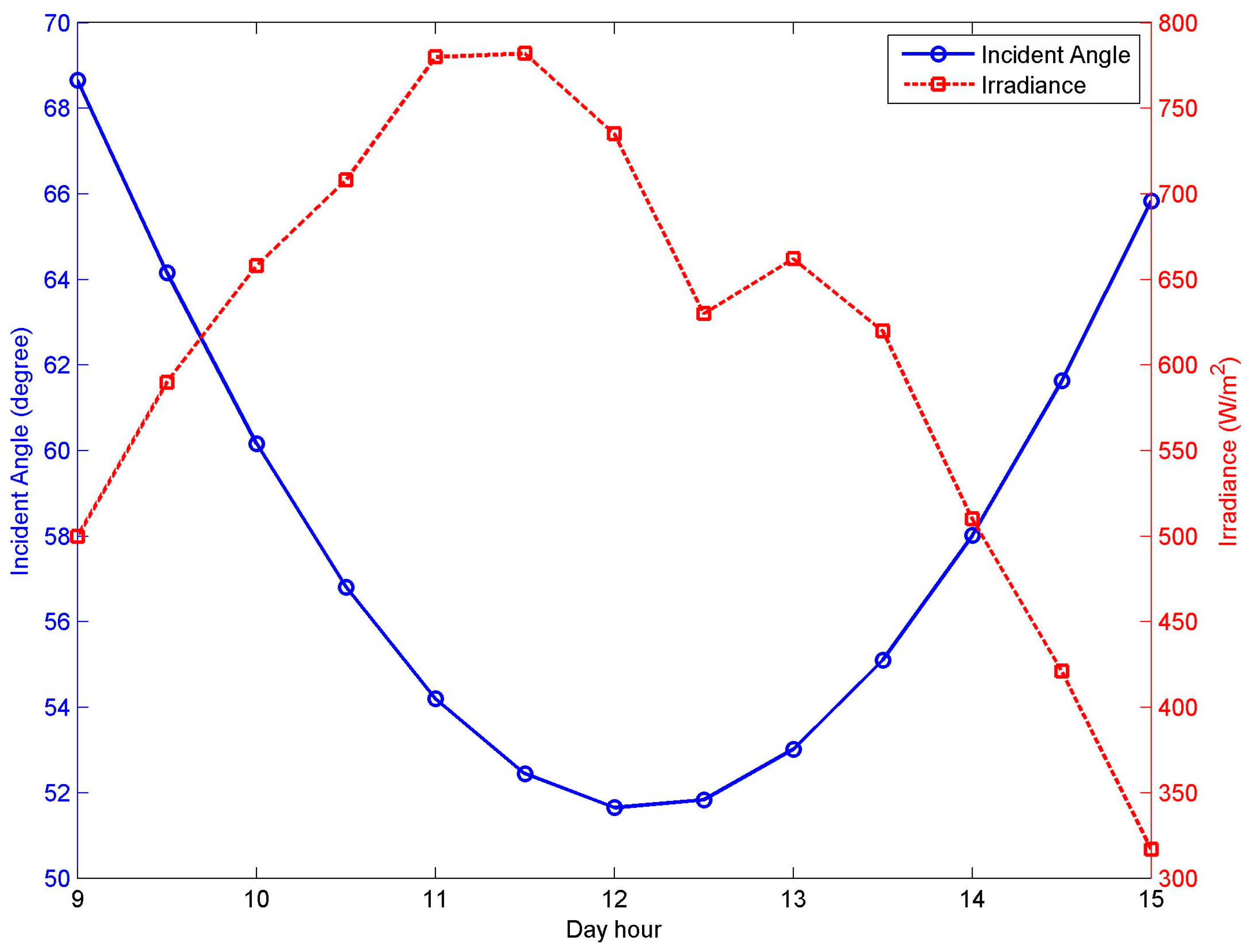 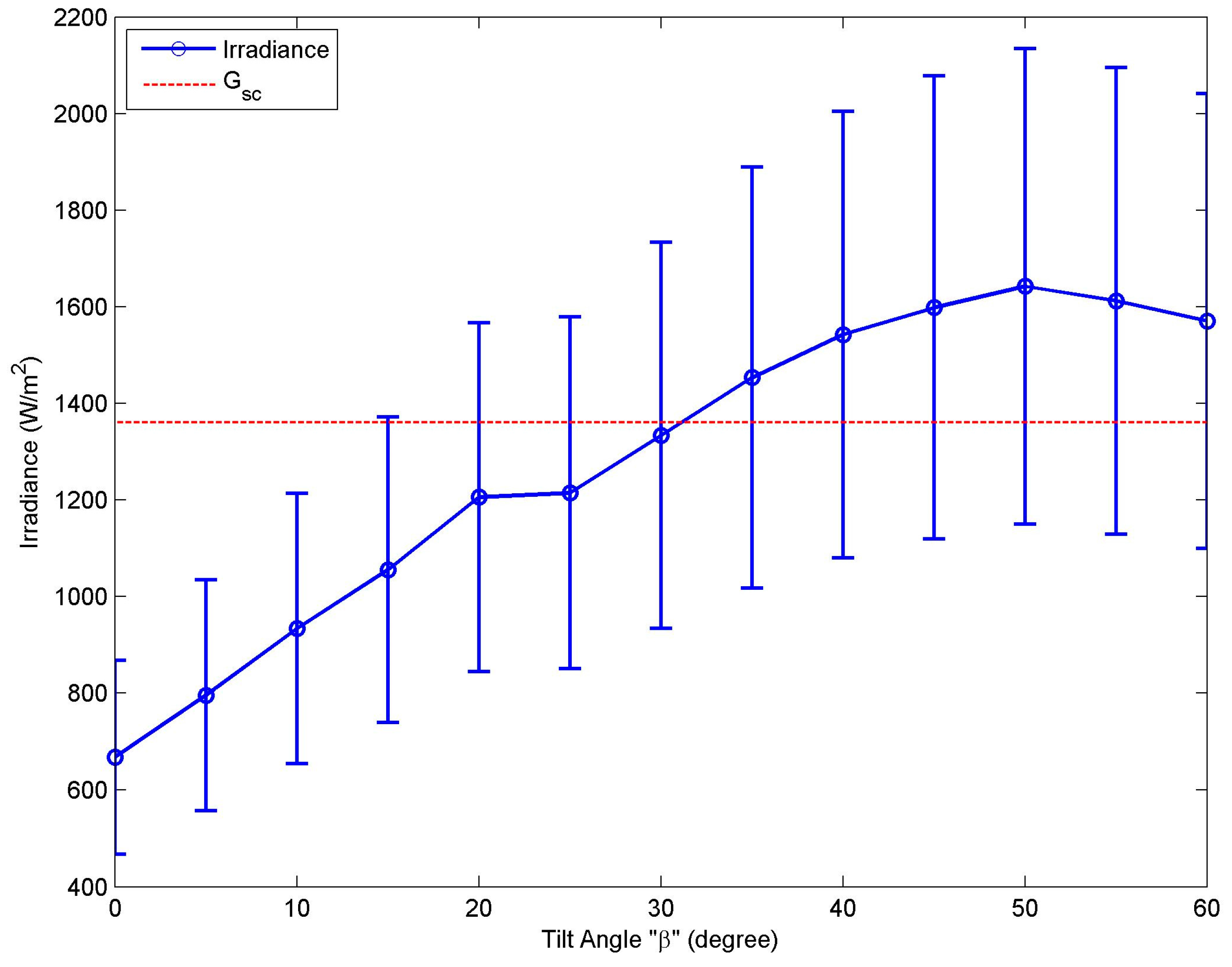