Participatory Guarantee Systems in Peru: Two Case Studies in Lima and Apurímac and the Role of Capacity Building in the Food Chain
Previous Article in Special Issue

:
The study investigated availability and food sources in urban areas using elements of the NOVA food classification system, adopted by the Brazilian Dietary Guidelines, in a Brazilian municipality. In addition, the study also aimed to identify inequalities in the geographical distribution of food retailers that commercialize healthy and/or unhealthy foods. This cross-sectional study was performed in the municipality of Jundiai in the State of São Paulo, Brazil. Data from within-store audit and geographic data were used to characterizing the nutrition community environment. The mean was calculated for food items available in each of the four NOVA groups for each audited food retailer. The mean of food items available in each of the four NOVA groups for each audited food retail were calculated. The density and proportion of different types of food retailers were georeferenced. The supermarkets, medium market stores, and grocery stores presented the highest availability of unprocessed foods as well as ultra-processed foods. Establishments that sold primarily unprocessed foods and included a fruits and vegetables section at the entrance of the store had a greater availability of healthy foods, but their density in the territory was low compared to establishments that prioritized the sale of ultra-processed foods and sold ultra-processed foods in the checkout area. Especially in middle- and low-income areas, the concentration of food retailers with priority sale of ultra-processed products is reaches 22 times higher than the sale of unprocessed or minimally processed foods. The study supported the identification of regions where it was necessary to improve access to equipment that marketed unprocessed foods as a priority.
Keywords:
food sources; food security; food deserts; urban food system; NOVA food classification system

Evidence indicates that food environment influences food accessibility [1,2,3], diet quality [4,5,6], and even the occurrence of obesity [7,8,9,10,11]. Factors in the community food environment linked to healthy food consumption include the presence of food stores and access to them, the types of food retailers in the territory [4,12,13], availability (quality of food stores) [14], accessibility (hours of operation), affordability of healthy foods [15,16], product placement, and food advertising [17,18,19].
The growing literature on the associations between food environment and obesity has been constantly explored in the context of “food deserts”, a term which has been used, more specifically, to refer to areas with low access to adequate food at affordable prices, which can contribute to social disparities in the diet and have a negative impact on the health of the population [2]. The relation with obesity has been greatly investigated, since food deserts are environments that, paradoxically, may encourage excessive caloric consumption [2]. Another important concept that has emerged in food-environment studies is the “food swamp”, which involves relative amounts of different types of foods (e.g., an assessment of energy-dense foods swamping out healthier options) and/or retail establishments [20].
In the food environment, most specifically in the community nutrition environment, it is possible to identify several types of food retailers such as supermarkets, wholesalers, grocery stores, convenience stores, confectioners, coffee shops, bars, restaurants, bakeries, among others [21]. These food retailers play a key role in the food choices and health of individuals, since they can offer healthy food varieties as well as ultra-processed foods [4,8,12,19]. The lack of food retailers near households and workplaces and the availability of unhealthy foods in these places can hinder access to a balanced diet [5,22,23,24]. A previous study conducted in the city of Jundiai, São Paulo, using secondary data showed higher concentrations of small markets in relation to supermarkets in lower-income neighborhoods. In addition, food retailers that sold fresh and unprocessed foods, such as farmers’ markets and butchers, were more present in the central areas of the city [25].
Both the access to various food retail services and the types of food they sell can become significant environmental barriers for vulnerable populations to achieving food security [1]. The high prevalence of obesity among low-income populations has been related to the restricted access of these populations to healthy foods, as well as to the increasing density of fast-food and convenience stores in the food environment where they live [1,8,10,11].
The greater supply of unprocessed foods (i.e., fruits, vegetables, cereals, fresh meat, eggs, milk) in food retail environments such as supermarkets and farmers’ markets has a significant influence on food consumption, especially among low-income people [4,6]. In Brazil, a study conducted by Duran et al. [4] showed that living in the vicinity of supermarkets, grocery stores, and farmers’ markets that commercialize fresh and unprocessed foods led to their consumption. On the other hand, the same study showed that living near food retailers that had a greater variety of sugary drinks and ultra-processed foods also increased the prevalence of their consumption.
Knowing the role played by the food environment, especially the community food environment, in the access to a healthier diet, and the fact that areas known as food deserts put food security at risk, thereby contributing to the increased obesity in the surrounding populations, the main goal of this study was to investigate availability and food sources in urban areas using the elements of the NOVA food classification system, adopted by the Brazilian Dietary Guidelines (BDG), in a Brazilian municipality. In addition, the study also aimed to identify inequalities in the geographical distribution of food retailers that commercialize healthy and/or unhealthy foods.

The CAB was funded by the Foundation for Research Support of the State of São Paulo (FAPESP), protocol number 2016/12766-6.

The authors gratefully acknowledge the food retailers that allowed us to carry out the audit, Patricia Serafim for typing and organizing the data and also for her support with field researchers, Paulista University for the support during field collection, the researchers who worked on the data collection, the Foundation for Research Support of the State of São Paulo (FAPESP) for the post-doctoral scholarship provided to C.A.B., and Coordenação de Aperfeiçoamento de Pessoal de Nível Superior (CAPES) for the doctoral scholarship provided to W.C.M. The research reported in this article is granted by the International Development Research Centre (IDRC). The funders had no role in the study design, the data collection and analysis, the decision to publish, or the preparation of the manuscript. 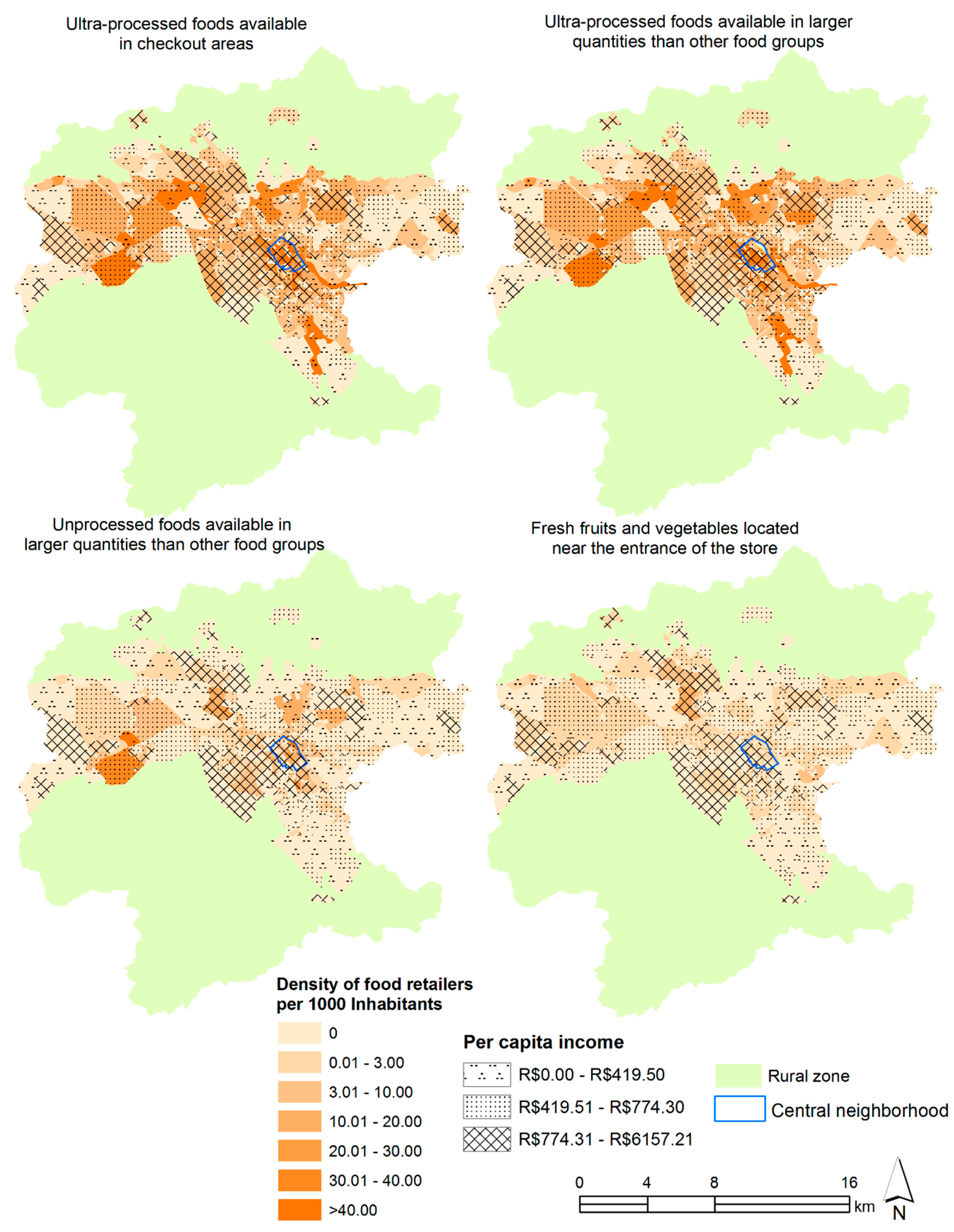