Investigating the Effects of the Built Environment on PM2.5 and PM10: A Case Study of Seoul Metropolitan City, South Korea
Previous Article in Journal

Urban areas face challenges including vehicular emissions, stormwater runoff, and sedentary lifestyles. Communities recognize the value of trees in mitigating these challenges by absorbing pollution and enhancing walkability. However, siting trees to optimize multiple benefits requires a systems approach that may cross sectors of management and expertise. We present a spatially-explicit method to optimize tree planting in Durham, NC, a rapidly growing urban area with an aging tree stock. Using GIS data and a ranking approach, we explored where Durham could augment its current stock of willow oaks through its plans to install 10,000 mid-sized deciduous trees. Data included high-resolution landcover metrics developed by the U.S. Environmental Protection Agency (EPA), demographics from the U.S. Census, an attributed roads dataset licensed to the EPA, and sidewalk information from the City of Durham. Census block groups (CBGs) were ranked for tree planting according to single and multiple objectives including stormwater reduction, emissions buffering, walkability, and protection of vulnerable populations. Prioritizing tree planting based on single objectives led to four sets of locations with limited geographic overlap. Prioritizing tree planting based on multiple objectives tended to favor historically disadvantaged CBGs. The four-objective strategy met the largest proportion of estimated regional need. Based on this analysis, the City of Durham has implemented a seven-year plan to plant 10,000 trees in priority neighborhoods. This analysis also found that any strategy which included the protection of vulnerable populations generated more benefits than others. View Full-Text
Keywords: eco-health; green space; EnviroAtlas eco-health; green space; EnviroAtlas
►▼ Show Figures 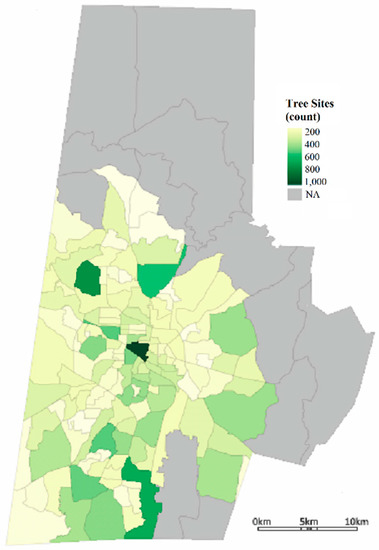