Role of Domestic Financial Reforms and Internationalization of Non-Financial Transnational Firms: Evidence from the Chinese Market
Next Article in Special Issue

Evaluating Power Reliability Dedicated for Sudden Disruptions: Its Application to Determine Capacity on the Basis of Energy Security

A direction-control valve in the dispenser closes when the pressure in the FCV tank reaches 80 MPa. Although the actual filling flow rate depends on the pressures of the FCV tank and accumulator, the filling flow rate in the model is maintained at a constant by adjusting the degree of opening of the flow control valve using a feedback control with the help of a flow meter. The FCV tank is filled with hydrogen from 10 MPa to 80 MPa in 3 min. Considering the capacity of the FCV tank (122.4 L), the flow rate required to fill the tank in 3 min is approximately 1000 Nm3/h. In this model, the filling flow rate is maintained at a constant at 1000 Nm3/h by adjusting the following flow control valves: A flow control valve with a high flow rate (900 Nm3/h), and a flow control valve with a low flow rate (100 Nm3/h).
As the FCV tank is being rapidly filled with hydrogen, the temperature inside the tank increases, with the possibility of exceeding the design criteria. Thus, a general dispenser is provided with a heat exchanger to cool the charged hydrogen. A heat-exchanger model is developed so that the temperature of hydrogen during the filling would be approximately −40 °C. If the pressure inside the dispenser remains high after the filling, the coupler cannot be removed from the FCV. Therefore, after the filling, the pressure is generally reduced by releasing the hydrogen to the atmosphere using a relief valve. In this model, the hydrogen is vented to the atmosphere between the coupler and the directional control valve.

Figure 7 shows the simulation results indicating the relationship between the flow rate and the pipe internal pressure in terms of the diameters of the leakage hole, d: (a) d = 0.8 mm, and (b) d = 2.0 mm. The National Institute of Advanced Industrial Science and Technology (AIST) reported the experimental results of the leakage tests [15]. They measured the leakage behavior using a pipe internal pressure of 40 kPa (gauge) for two pinhole diameters of 0.8 mm and 2.0 mm. Their experimental results [15] are plotted in Figure 7. In this study, we simulated the leakage behaviors under the same conditions as in their experiments. Figure 7 shows the analysis results obtained using the values of 0.8C and 0.7C. As shown in Figure 7, it was found that the value obtained by multiplying C by 0.8 is closer to the experimental value with respect to the leakage model wherein the leakage diameters are 0.8 mm and 2.0 mm.

Figure 8 shows the simulation results for leakage diameters of 2, 1, and 0.5 mm. In the leakage model, the initial internal pressure of the pipe was set to 50 MPa. These are the results obtained by multiplying the sonic conductance by 0.8. The plots in Figure 8 show the experimental results for leakage diameters of 2, 1, and 0.5 mm [16]. The hydrogen-release flow is obtained for pipe internal pressures of approximately 40, 30, 20, and 10 MPa. As shown in Figure 8, it was found that the simulation results are in good agreement with the experimental results as in the case of the subsonic flow. We chose the sonic conductance as 0.8 times the theoretical value to reflect the influence of the pressure loss due to the shape of the nozzle. Thus, the hydrogen-release flow was estimated using the model wherein the theoretical value of the sonic conductance is multiplied by 0.8. In this model, the simulation result was verified to be in good agreement with the experimental result of the hydrogen behavior for a pipe internal pressure of 50 MPa, but it was not verified for a pressure of 50 MPa or more.

3. Evaluation of Safety Measures in the Event of Accidents

4.1. Results of Safety Measures for Accidents Arranged in Series

The initial event is defined when, as shown in Figure 9a, hydrogen leaks through a leakage hole with a diameter of 1 mm of the dispenser nozzle during the filling of the FCV with hydrogen. The initial value of the pressure is 82 MPa.
In Figure 9a, the blue line indicates the path of hydrogen when the hydrogen leaks. The safety measures on this line are considered effective against the initial event, as listed in Table 3. The overfill preventing valve of the dispenser has the same function as that of the isolation valve in case of an emergency. At the time of filling the FCV with hydrogen, the accumulator is concurrently boosted using the compressor, and the isolation valve between the compressor and the accumulator is in effect. In Figure 9a and Table 3, numbers are assigned to the safety measures.
Figure 10 shows the event tree diagram of the accident scenario. The final events were classified into two types: Small leakage and large leakage. The small leakage was defined as the state wherein the line was interrupted between the accumulator and the leakage hole. With respect to the small leakage events, the same amount of hydrogen release was defined. The large leakage was defined as the state wherein the line was connected between the accumulator and the leakage hole. As shown in Figure 10, numbers were assigned to the events.
The amounts of hydrogen released in the events, 1–7, were calculated by simulating the physical model, which is given in Section 2. In the simulation, the amount of hydrogen released in 240 s was calculated. Figure 11 shows the hydrogen-release behaviors of the events, 1–7.
To evaluate the significance of the safety measures, the consequence effects due to the failure combinations of the safety measures were evaluated using the RSM. The response surface is a function used to express the variation in a characteristic value with the help of an explanatory variable. The characteristic value, y, is obtained using Equation (2).
y = A1x1 + A2x2 + … +Anxn + ε
Ai (i = 1, 2…, n) is the constant, xi (i = 1, 2…, n) is the explanatory variable, and ε is the error. In this study, y is the amount of hydrogen released in 240 s, and xi is the function of the safety measures. Equation (3) represents the response surface of the accident scenario.
y = A1x1 (A2x2 + A3x3)∙x4∙(A5x5 + A6) + A7
Using one of the two functions, i.e., x1 and x4, the hydrogen release can be shut off. When both x2 and x3 functions are applicable, the hydrogen release can be shut off. In this case, the first term in Equation (3) is zero. Equation (4) is obtained by expanding and rearranging Equation (3) with new coefficients.
y = B1x1x2x4 + B2x1x2x4x5 + B3x1x3x4 + B4x1x3x4x5 + B5
x1x2x4, x1x2x4x5, x1x3x4, and x1x3x4x5 are regarded as variables. In Equation (4), the coefficient, Bn, reflects the degree of influence of a failure combination of the safety measures. Considering Equation (4) and Figure 11, Table 4 lists the matrix. The response surface was obtained using the multiple regression analysis with the matrix listed in Table 4. Table 5 lists the results of the multiple regression analysis. By substituting the values of Bn in Equation (4), we obtained Equation (5).
y = 3.56x1x2x4 + 1.39x1x2x4x5 + 0.40x1x3x4 + 0.31x1x3x4x5 + 0.56
Considering Bn, the influence degree of x1x2x4 is found to be the highest. Therefore, in the accident scenario considered during this time, the combination of failures of the overfill preventing valve, flow control valve (high flow rate), and isolation valve (compressor—dispenser) has the highest influence degree. However, the influence degrees of x1x3x4 and x1x3x4x5 are relatively low. The RSM is used to quantitatively evaluate the influence degree of the accident scenario. This might contribute to the design of safety measures in the detailed design stage. For example, if the risk due to a combination of failures of the safety measures cannot be tolerated, the safety measures should be controlled using different electrical systems.

4.2. Results of Safety Measures for Accidents Arranged in Parallel

This work was supported by the Council for Science, Technology and Innovation (CSTI) through its Cross-ministerial Strategic Innovation Promotion Program (SIP), and “Energy Carrier” (funding agency: Japan Science and Technology Agency (JST)).

The authors declare conflict of interest. 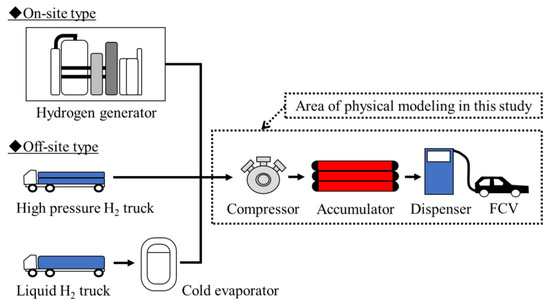 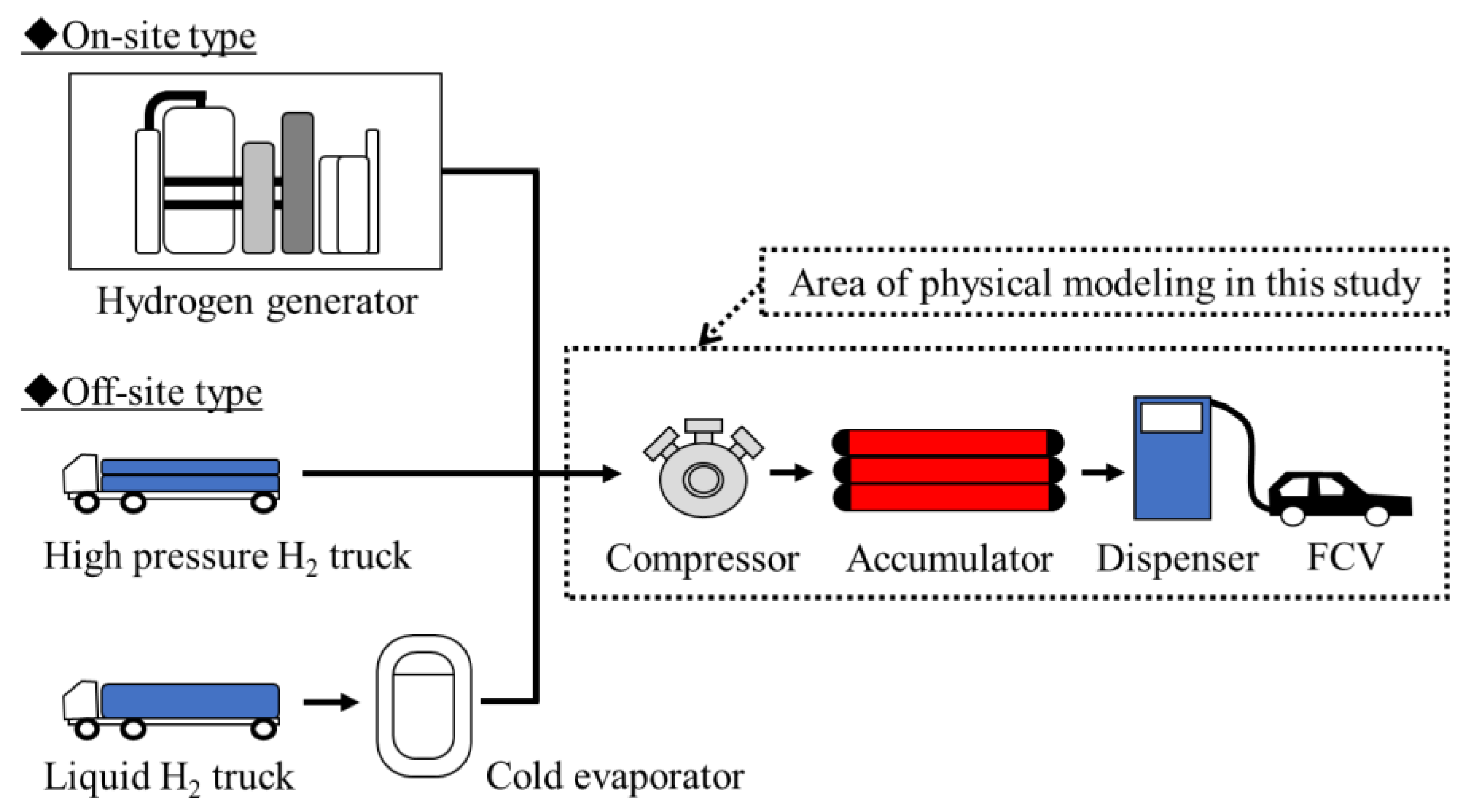 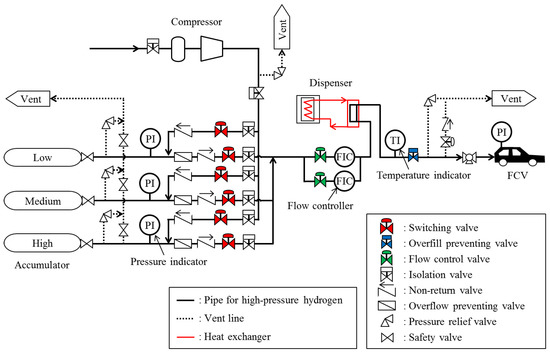 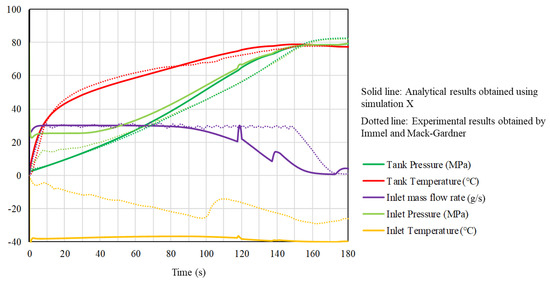 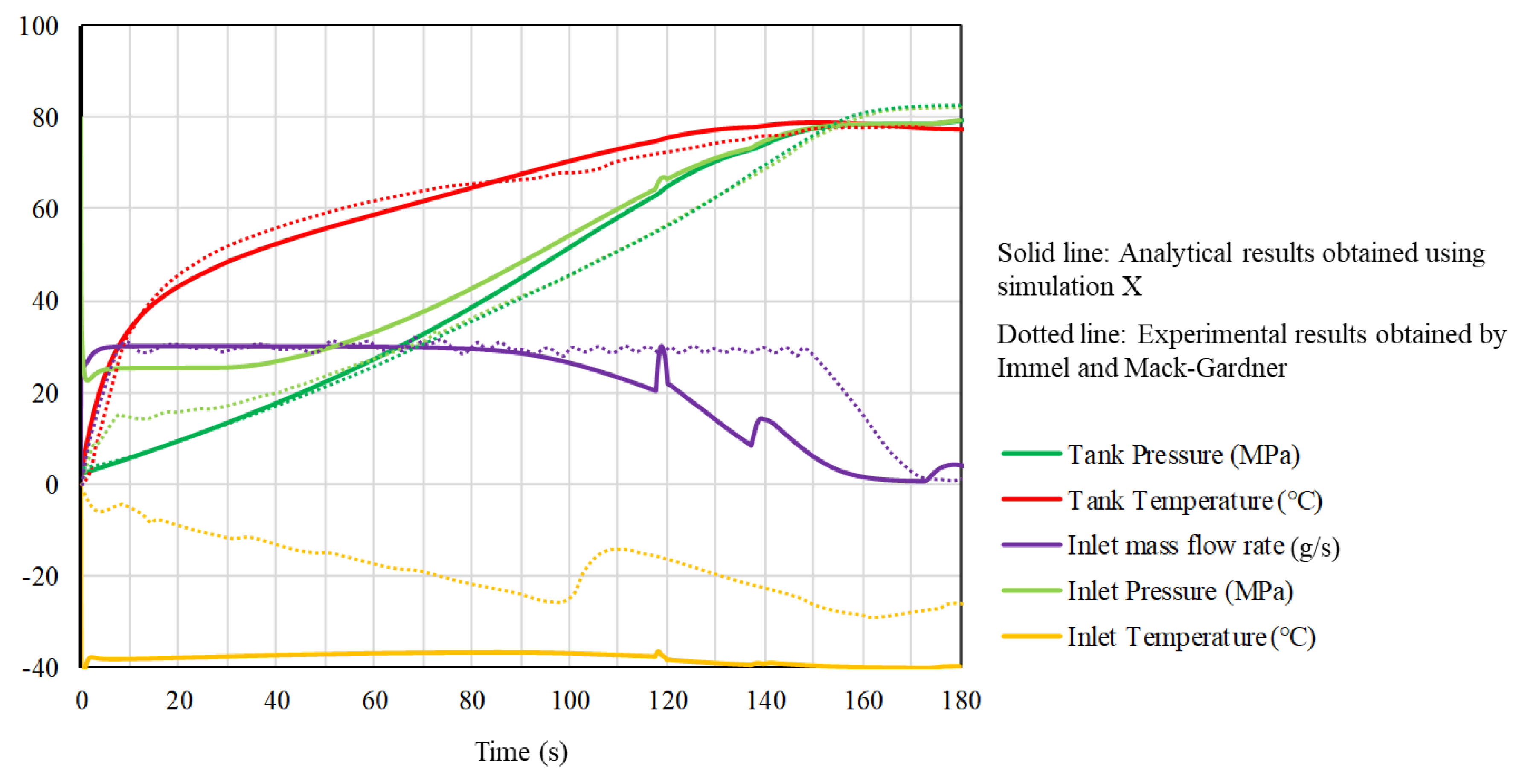 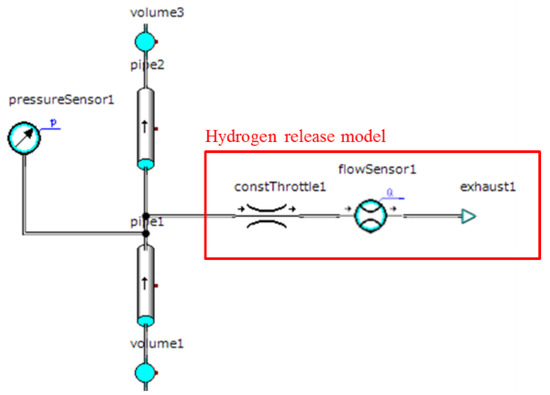 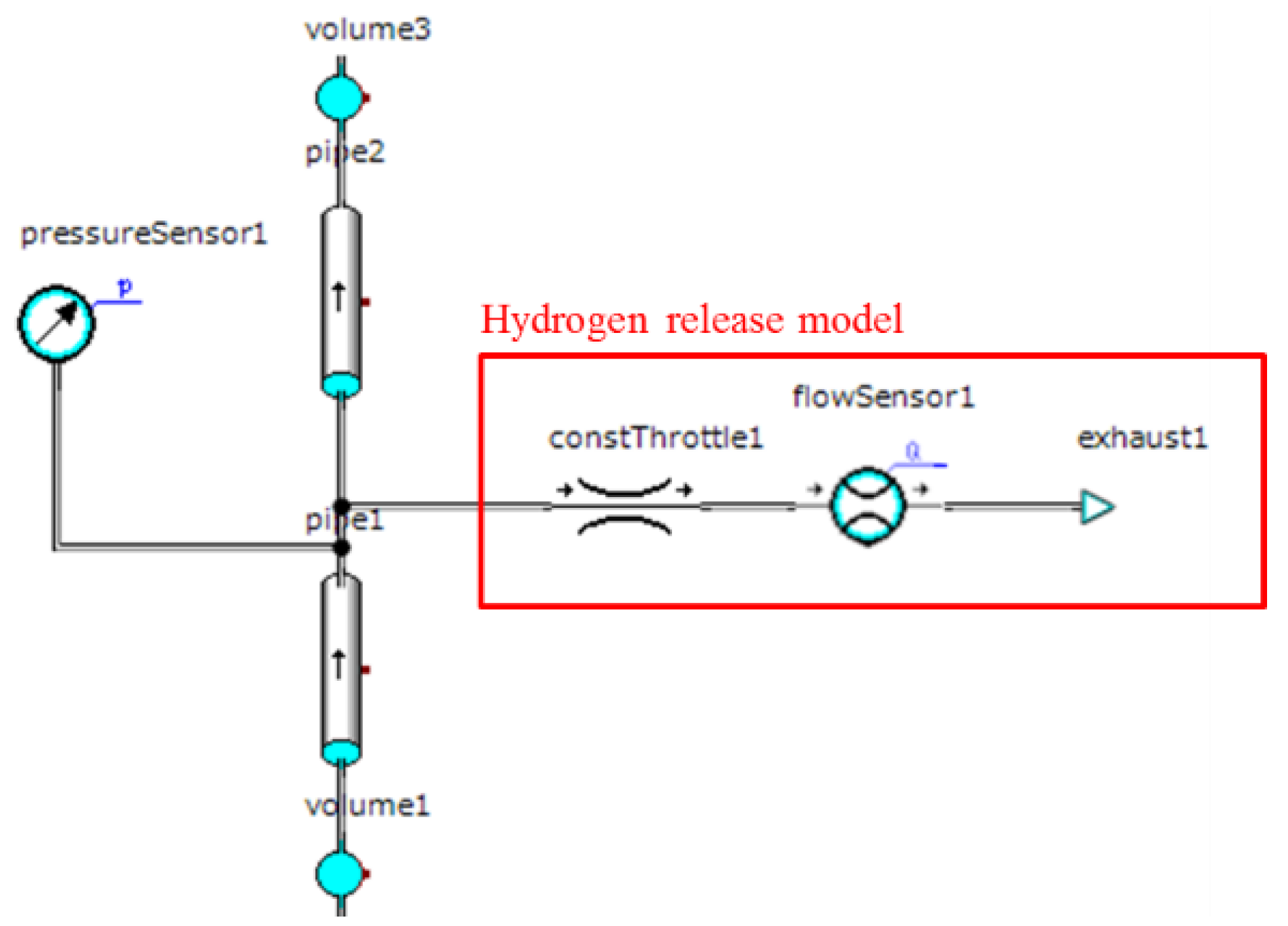 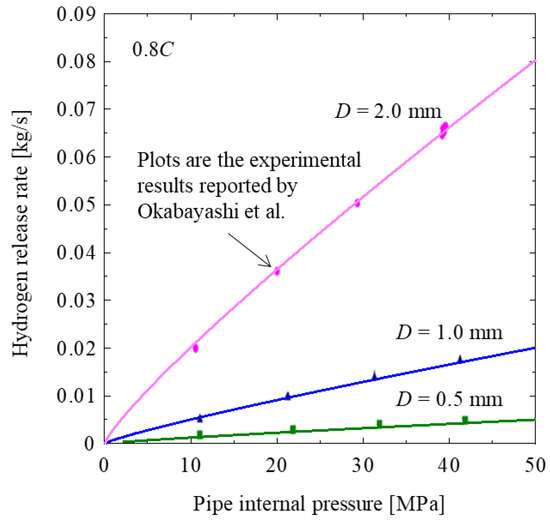 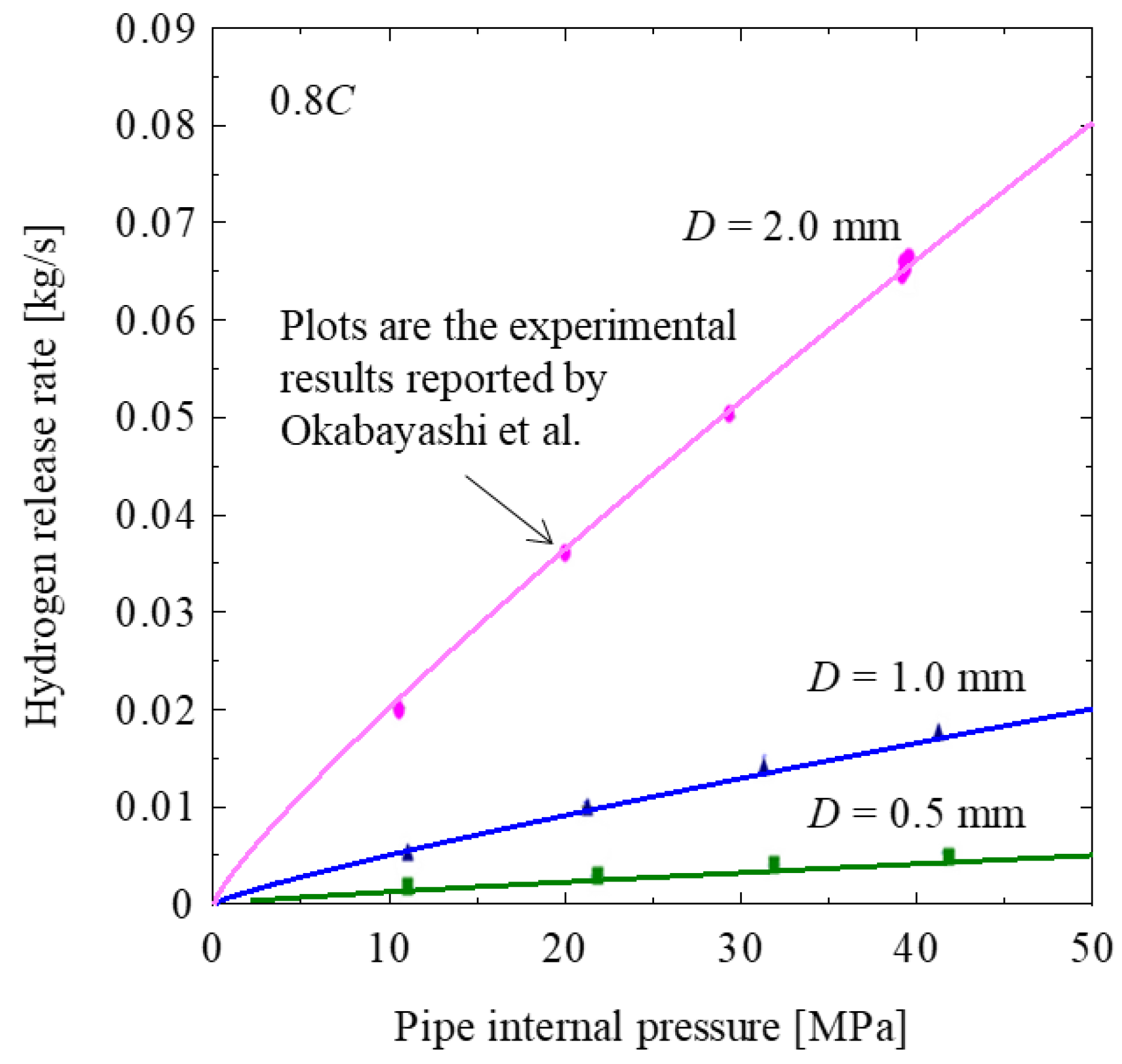 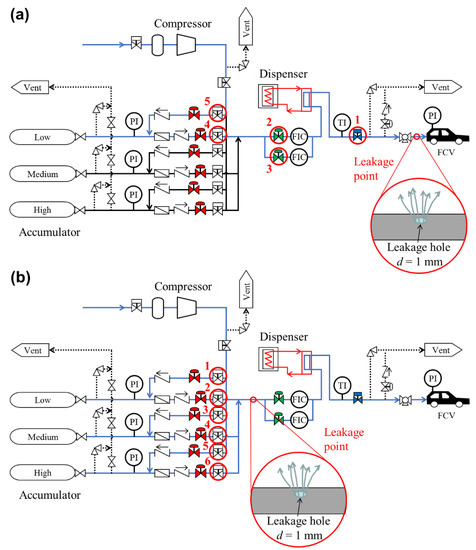 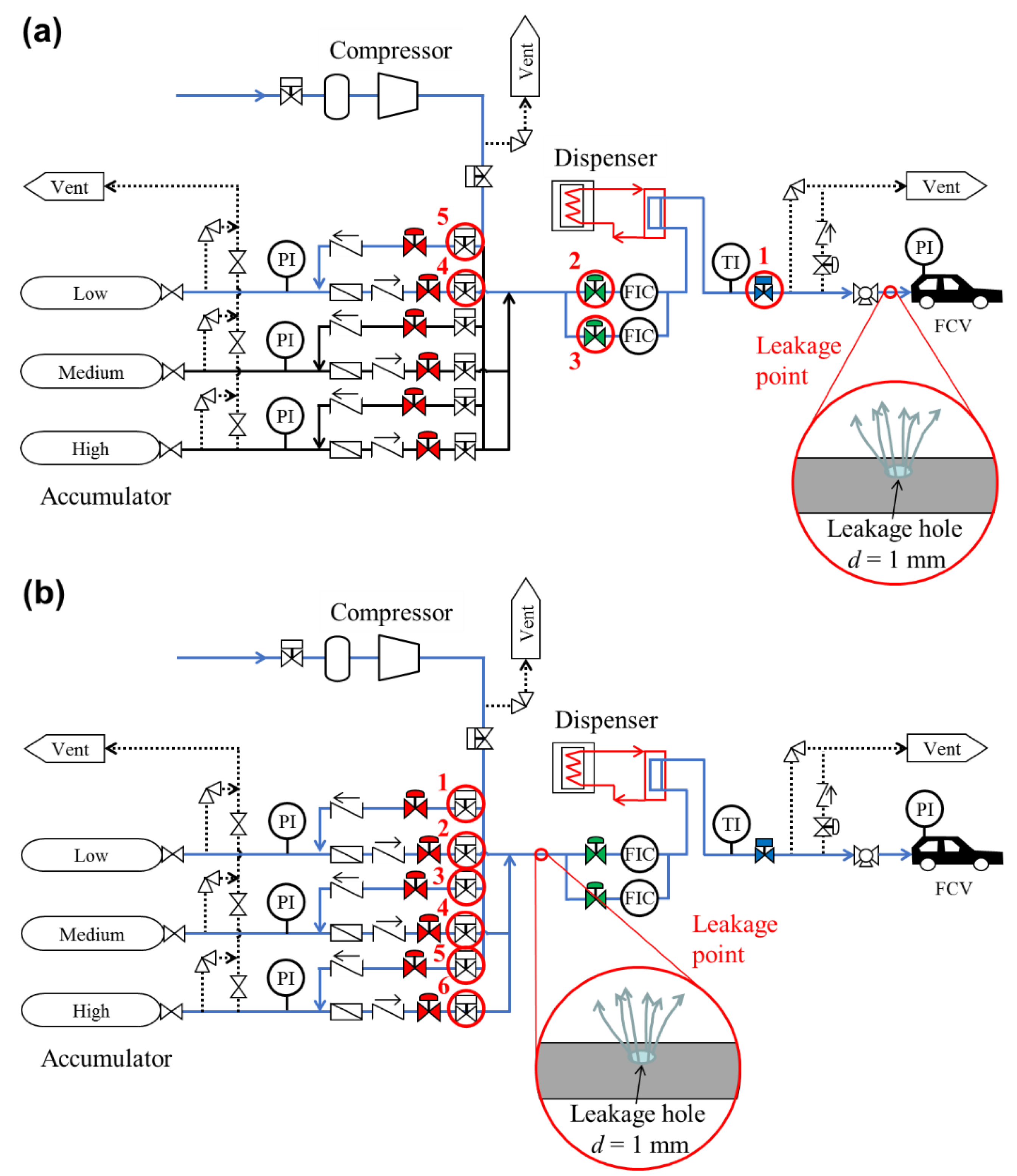 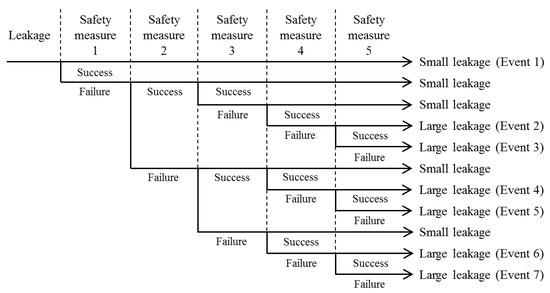 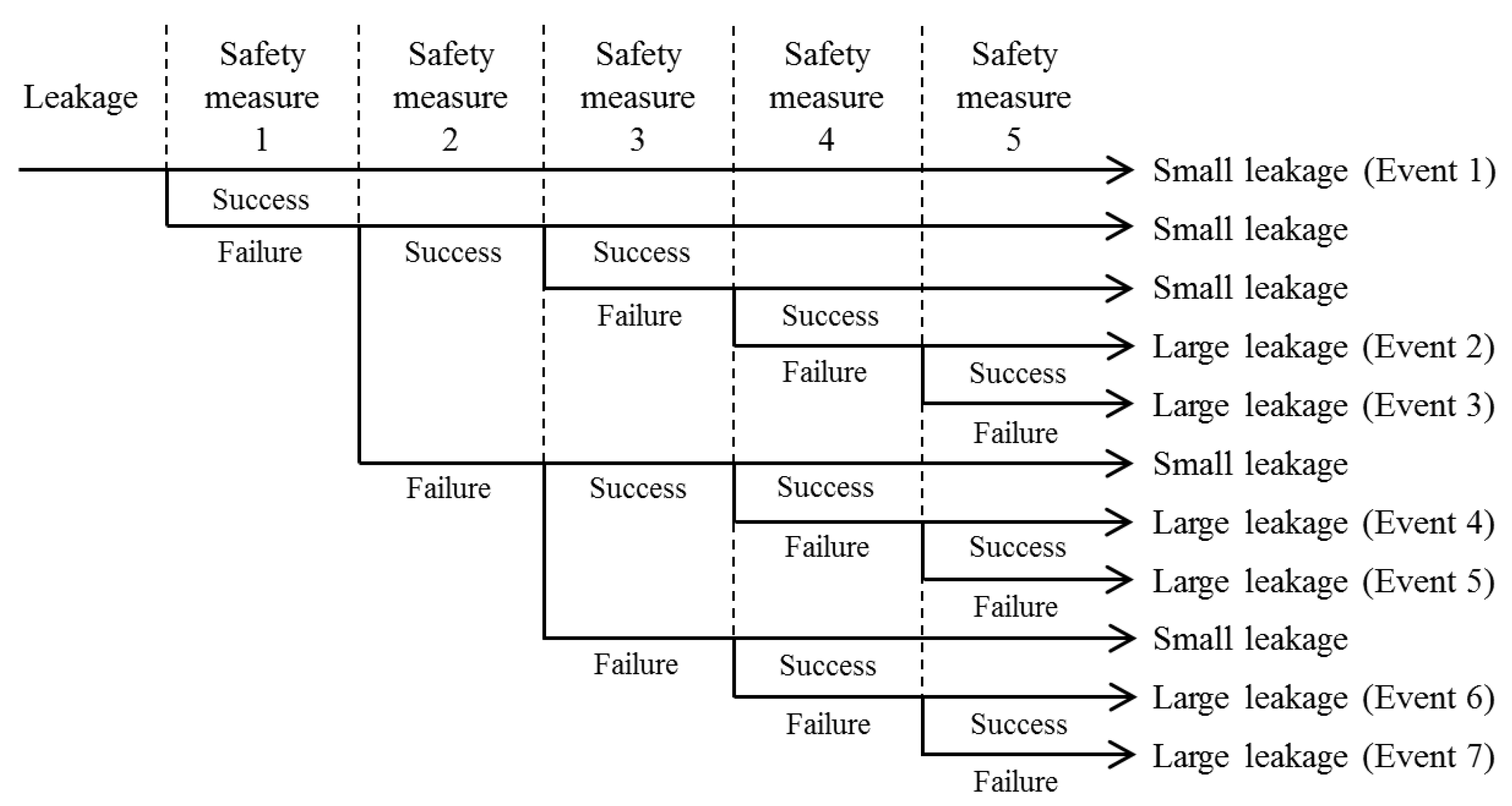 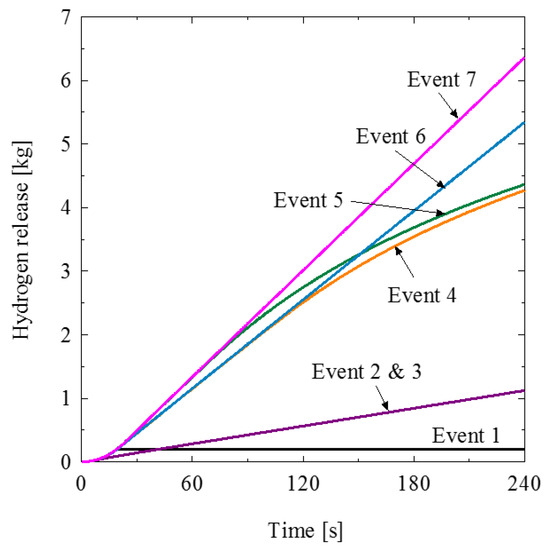 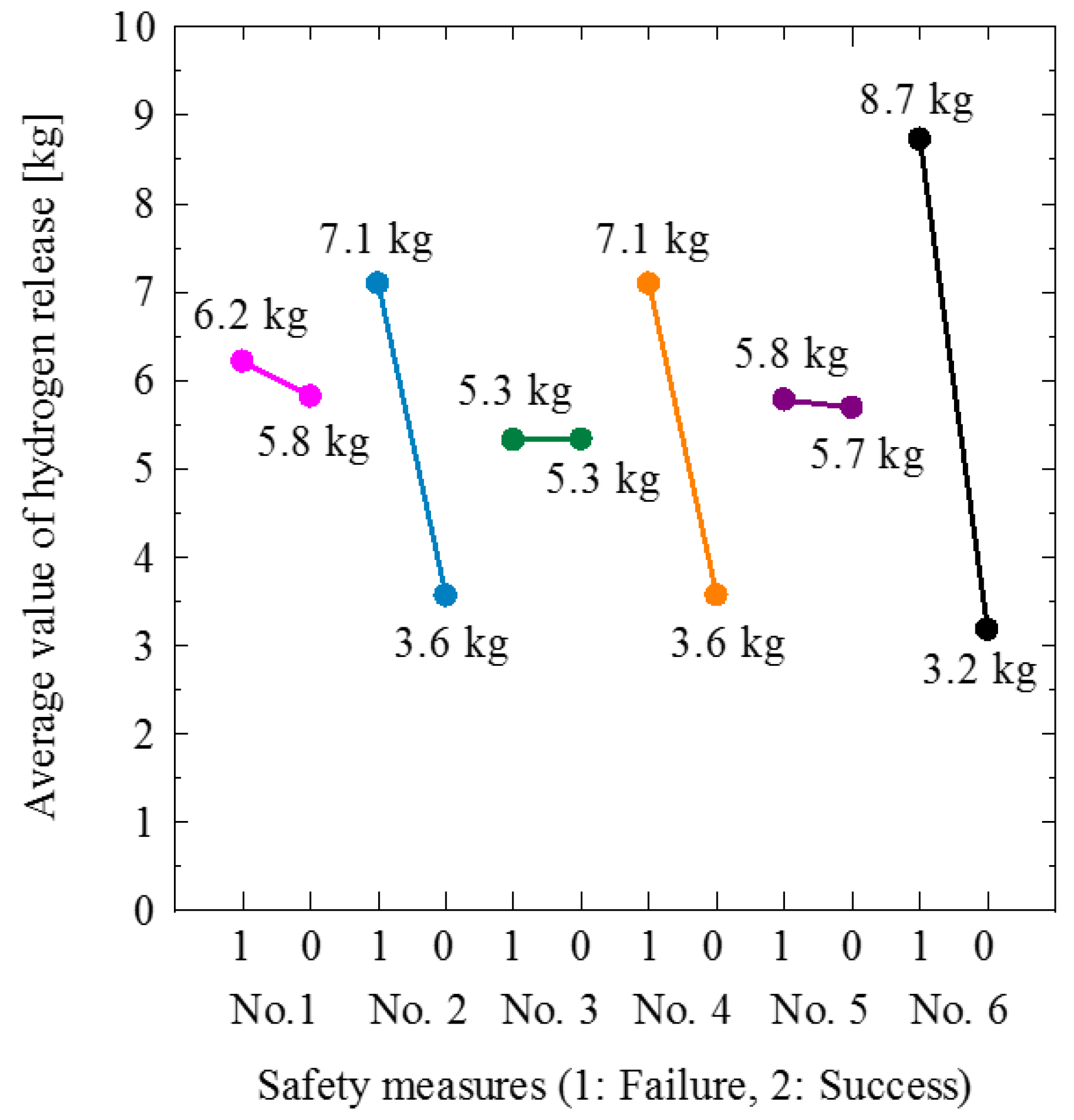 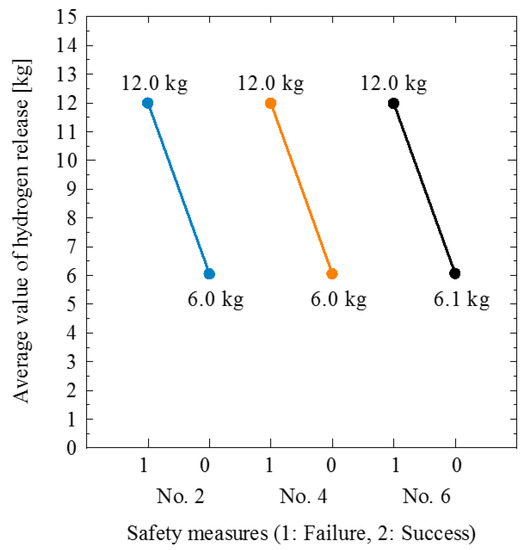 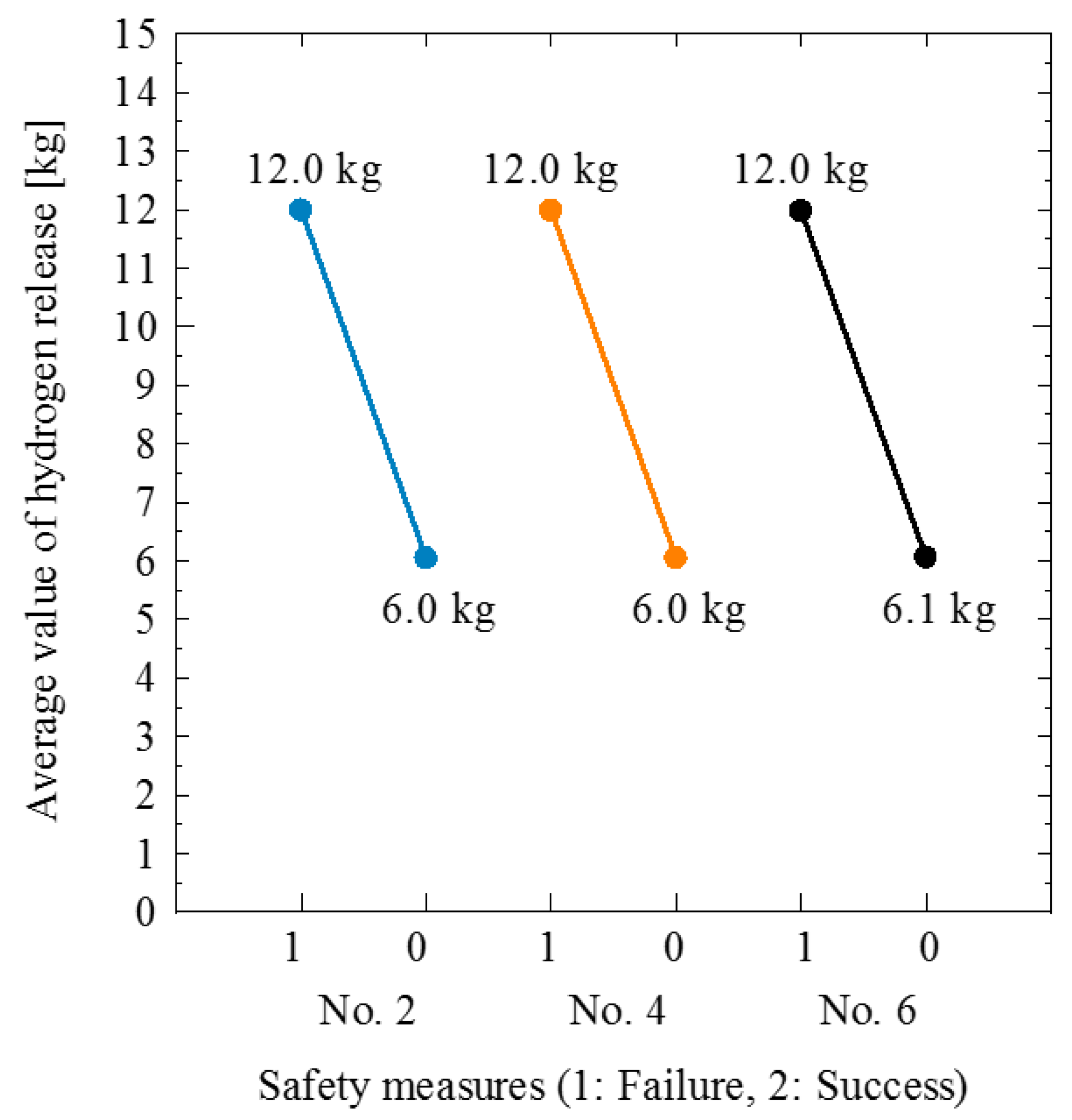