An Assessment of Secondary Clinical Disease, Milk Production and Quality, and the Impact on Reproduction in Holstein Heifers and Cows from a Single Large Commercial Herd Persistently Infected with Bovine Viral Diarrhea Virus Type 2
Previous Article in Special Issue

Isolation and Characterization of Bacteriophages That Infect Citrobacter rodentium, a Model Pathogen for Intestinal Diseases

The lytic and lysogenic life cycles of marine phages are influenced by environmental conditions such as solar radiation, temperature, and host abundance. Temperature can regulate phage infection, but its role is difficult to discern in oligotrophic waters where there is typically low host abundance and high temperatures. Here, we study the temporal variability of viral dynamics and the occurrence of lysogeny using mitomycin C in a eutrophic coastal lagoon in the oligotrophic Red Sea, which showed strong seasonality in terms of temperature (22.1–33.3 °C) and large phytoplankton blooms. Viral abundances ranged from 2.2 × 106 to 1.5 × 107 viruses mL−1 and were closely related to chlorophyll a (chl a) concentration. Observed high virus-to-bacterium ratio (VBR) (4–79; 16 ± 4 (SE)) suggests that phages exerted a tight control of their hosts as indicated by the significant decrease in bacterial abundance with increasing virus concentration. Heterotrophic bacterial abundance also showed a significant decrease with increasing temperature. However, viral abundance was not related to temperature changes and the interaction of water temperature, suggesting an indirect effect of temperature on decreased host abundance, which was observed at the end of the summertime. From the estimated burst size (BS), we observed lysogeny (undetectable to 29.1%) at low percentages of 5.0% ± 1.2 (SE) in half of the incubations with mitomycin C, while it increased to 23.9% ± 2.8 (SE) when the host abundance decreased. The results suggest that lytic phages predominate, switching to a moderate proportion of temperate phages when the host abundance reduces. View Full-Text
Keywords: phage; marine bacteria; marine viruses; temperature; mitomycin C; viral production; lytic; lysogeny; Red Sea; eutrophic phage; marine bacteria; marine viruses; temperature; mitomycin C; viral production; lytic; lysogeny; Red Sea; eutrophic
►▼ Show Figures 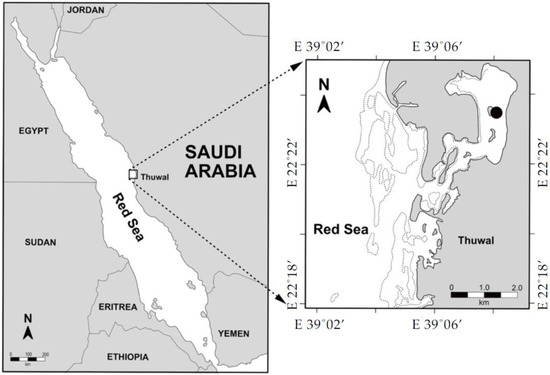