Detection of Astrovirus in a Cow with Neurological Signs by Nanopore Technology, Italy
Previous Article in Special Issue

Usutu virus (USUV) is a mosquito-borne flavivirus, closely related to the West Nile virus (WNV). Similar to WNV, USUV may cause infections in humans, with occasional, but sometimes severe, neurological complications. Further, USUV can be highly pathogenic in wild and captive birds and its circulation in Europe has given rise to substantial avian death. Adequate study models of this virus are still lacking but are critically needed to understand its pathogenesis and virulence spectrum. The chicken embryo is a low-cost, easy-to-manipulate and ethically acceptable model that closely reflects mammalian fetal development and allows immune response investigations, drug screening, and high-throughput virus production for vaccine development. While former studies suggested that this model was refractory to USUV infection, we unexpectedly found that high doses of four phylogenetically distinct USUV strains caused embryonic lethality. By employing immunohistochemistry and quantitative reverse transcriptase-polymerase chain reaction, we demonstrated that USUV was widely distributed in embryonic tissues, including the brain, retina, and feather follicles. We then successfully developed a primary cell line from the chorioallantoic membrane that was permissive to the virus without the need for viral adaptation. We believe the future use of these models would foster a significant understanding of USUV-induced neuropathogenesis and immune response and allow the future development of drugs and vaccines against USUV. View Full-Text
Keywords: flavivirus; chicken embryo; model; Usutu virus; chorioallantoic membrane; primary culture; replication flavivirus; chicken embryo; model; Usutu virus; chorioallantoic membrane; primary culture; replication
►▼ Show Figures 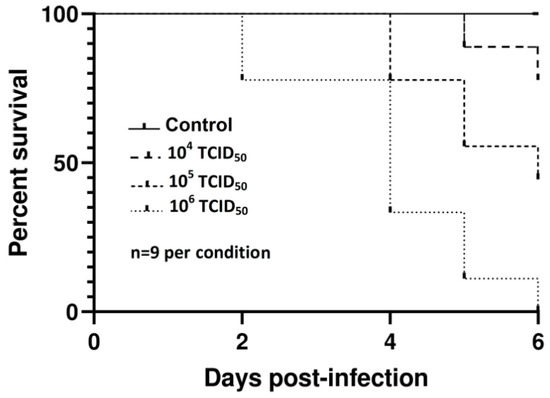