Retroviral nucleocapsid (NC) proteins are nucleic acid chaperones that play distinct roles in the viral life cycle. During reverse transcription, HIV-1 NC facilitates the rearrangement of nucleic acid secondary structures, allowing the transactivation response (TAR) RNA hairpin to be transiently destabilized and annealed to a complementary RNA hairpin. In contrast, during viral assembly, NC, as a domain of the group-specific antigen (Gag) polyprotein, binds the genomic RNA and facilitates packaging into new virions. It is not clear how the same protein, alone or as part of Gag, performs such different RNA binding functions in the viral life cycle. By combining single-molecule optical tweezers measurements with a quantitative mfold-based model, we characterize the equilibrium stability and unfolding barrier for TAR RNA. Comparing measured results with a model of discrete protein binding allows us to localize affected binding sites, in addition to quantifying hairpin stability. We find that, while both NCp7 and Gag∆p6 destabilize the TAR hairpin, Gag∆p6 binding is localized to two sites in the stem, while NCp7 targets sites near the top loop. Unlike Gag∆p6, NCp7 destabilizes this loop, shifting the location of the reaction barrier toward the folded state and increasing the natural rate of hairpin opening by ~104. Thus, our results explain why Gag cleavage and NC release is an essential prerequisite for reverse transcription within the virion. View Full-Text
Keywords: HIV-1; TAR hairpin; Gag; nucleocapsid; optical tweezers; energy landscape; transition state; mfold HIV-1; TAR hairpin; Gag; nucleocapsid; optical tweezers; energy landscape; transition state; mfold
►▼ Show Figures 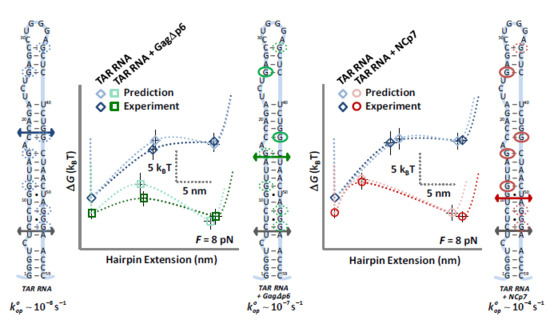