Peste des petits ruminants virus (PPRV) causes a contagious disease of high morbidity and mortality in global sheep and goat populations. To better control this disease and inform eradication strategies, an improved understanding of how PPRV transmission risk varies by age is needed. Our study used a piece-wise catalytic model to estimate the age-specific force of infection (FOI, per capita infection rate of susceptible hosts) among sheep, goats, and cattle from a cross-sectional serosurvey dataset collected in 2016 in Tanzania. Apparent seroprevalence increased with age, reaching 53.6%, 46.8%, and 11.6% (true seroprevalence: 52.7%, 52.8%, 39.2%) for sheep, goats, and cattle, respectively. Seroprevalence was significantly higher among pastoral animals than agropastoral animals across all ages, with pastoral sheep and goat seroprevalence approaching 70% and 80%, respectively, suggesting pastoral endemicity. The best fitting piece-wise catalytic models merged age groups: two for sheep, three for goats, and four for cattle. The signal of these age heterogeneities were weak, except for a significant FOI peak among 2.5–3.5-year-old pastoral cattle. The subtle age-specific heterogeneities identified in this study suggest that targeting control efforts by age may not be as effective as targeting by other risk factors, such as production system type. Further research should investigate how specific husbandry practices affect PPRV transmission. View Full-Text
Keywords: Epidemiology; peste-des-petits-ruminants; seroepidemiologic studies; Tanzania; force of infection; catalytic model Epidemiology; peste-des-petits-ruminants; seroepidemiologic studies; Tanzania; force of infection; catalytic model
►▼ Show Figures 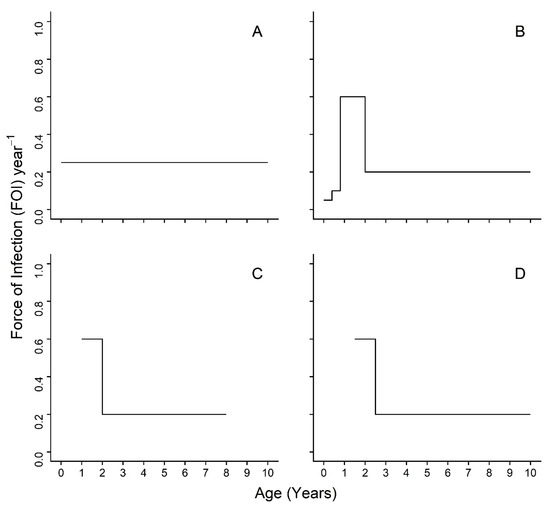