Curcumin as an Antiviral Agent
Next Article in Special Issue

Zika Virus and Arthritis/Arthralgia: A Systematic Review and Meta-Analysis

Currently, the lowest formal taxon in virus classification is species; however, unofficial lower-level units are commonly used in everyday work. Tick-borne encephalitis virus (TBEV) is a species of mammalian tick-borne flaviviruses that may cause encephalitis. Many known representatives of TBEV are grouped into subtypes, mostly according to their phylogenetic relationship. However, the emergence of novel sequences could dissolve this phylogenetic grouping; in the absence of strict quantitative criterion, it may be hard to define the borders of the first TBEV taxonomic unit below the species level. In this study, the nucleotide/amino-acid space of all known TBEV sequences was analyzed. Amino-acid sequence p-distances could not reliably distinguish TBEV subtypes. Viruses that differed by less than 10% of nucleotides in the polyprotein-coding gene belonged to the same subtype. At the same time, more divergent viruses were representatives of different subtypes. According to this distance criterion, TBEV species may be divided into seven subtypes: TBEV-Eur, TBEV-Sib, TBEV-FE, TBEV-2871 (TBEV-Ob), TBEV-Him, TBEV-178-79 (TBEV-Bkl-1), and TBEV-886-84 (TBEV-Bkl-2). View Full-Text
Keywords: TBEV; taxonomy; subtypes; pairwise genetic distance TBEV; taxonomy; subtypes; pairwise genetic distance
►▼ Show Figures 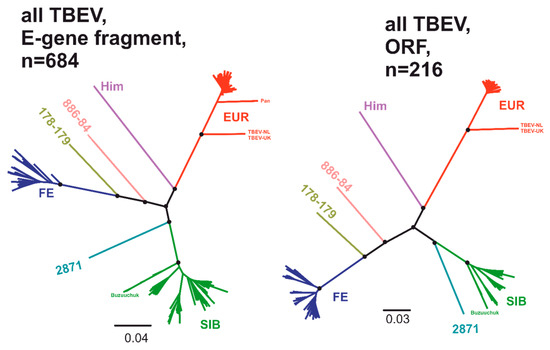