Mouse APOBEC3 Restriction of Retroviruses
Next Article in Special Issue

:
This is the first report of a successful treatment of a non-effusive feline infectious peritonitis (FIP) uveitis case using an oral adenosine nucleoside analogue drug and feline interferon omega, and alpha-1 acid glycoprotein (AGP) as an indicator of recovery. A 2-year-old male neutered Norwegian Forest Cat presented with uveitis, keratic precipitates, mesenteric lymphadenopathy and weight loss. The cat was hypergammaglobulinaemic and had a non-regenerative anaemia. Feline coronavirus (FCoV) RNA was detected in a mesenteric lymph node fine-needle aspirate by a reverse-transcriptase polymerase chain reaction—non-effusive FIP was diagnosed. Prednisolone acetate eye drops were administered three times daily for 2 weeks. Oral adenosine nucleoside analogue (Mutian) treatment started. Within 50 days of Mutian treatment, the cat had gained over one kilogram in weight, his globulin level reduced from 77 to 51 g/L and his haematocrit increased from 22 to 35%; his uveitis resolved and his sight improved. Serum AGP level reduced from 3100 to 400 μg/mL (within normal limits). Symmetric dimethylarginine (SDMA) was above normal at 28 μg/dL, reducing to 14 μg/dL on the cessation of treatment; whether the SDMA increase was due to FIP lesions in the kidney or Mutian is unknown. Mutian treatment stopped and low-dose oral recombinant feline interferon omega begun—the cat’s recovery continued.
Keywords:
feline infectious peritonitis; coronavirus; uveitis; Mutian; adenosine nucleoside analogue; feline interferon omega; mesenteric lymph node; alpha-1 acid glycoprotein; symmetric dimethylarginine

Feline coronavirus (FCoV) is a highly infectious enteric virus which causes subclinical infection or diarrhoea in the majority of infected cats [1], but potentially lethal monocyte-associated immune-mediated granulomatous vasculitis [2], known as feline infectious peritonitis (FIP), in around 10% of infected cats [1]. FCoV is a positive-sense RNA alpha coronavirus, and a member of the Coronaviridae family of the order Nidovirales [3].
Although FIP treatment with an injectable nucleoside analogue [4] and cure of enteric FCoV infection with an oral adenosine nucleoside analogue (Mutian, Nantong Biotechnology, China) have previously been reported [5], this case report the first description of the recovery of a cat with a systemic FCoV infection—i.e., FIP—using Mutian.

Skywise was a 2-year-old male neutered Norwegian Forest Cat from a household of five cats; he presented with uveitis in his remaining eye (the right, he lost his left as a kitten) and intermittent diarrhoea. His iris was discoloured and mutton fat keratic precipitates were visible (Figure 1a).
His history included the introduction of two 11-month-old Norwegian Forest Cats (Link and Zelda) into his household three months previously, and the onset of uveitis five days after being given his annual vaccine booster (Leucofeligen, Virbac, France). Skywise had been tested for FCoV antibodies and was found to have a very high titre of over 10,240 (Idexx Laboratories, Wetherby, UK) three weeks prior to presentation due to an in-contact cat (Paddy) being persistently pyrexic and lethargic. Paddy was negative for FeLV p27 antigens and FIV antibodies (Idexx Laboratories, Wetherby, UK), but his FCoV antibody titre was found to be very high (Table 1), therefore all the other cats in the household were FCoV antibody tested in order to establish if they should be isolated from Paddy, but since they were also found to have high FCoV antibody titres (Table 1) segregation was not necessary.
At presentation, the patient’s body weight was 2.89 kg (Figure 2) and body condition score was 2/9. An ultrasound examination confirmed the absence of any abdominal or thoracic effusion, but a mesenteric lymphadenopathy was present. An ultrasound-guided fine-needle aspirate (FNA) of the mesenteric lymph node (MLN) was taken for FCoV reverse-transcriptase polymerase chain reaction (RT-qPCR) (Idexx Laboratories, Wetherby, UK). The test was positive for mutation M1058L and negative for mutation S1060A [6].
Blood results are shown in Table 2. Haematology revealed a mild to moderate non-regenerative anaemia with a haematocrit (Hct) of 22%, a lymphocyte count of 2.07 × 109/L, and eosinopenia below the detection level (reported as 0.0 × 109/L). Blood biochemistry showed hyperglobulinaemia (77.2 g/L), and an albumin to globulin (A:G) ratio of 0.31. Bilirubin was 11 micromol per litre (μmol/L) (0.64 mg/dL). Alpha-1 acid glycoprotein (AGP) was elevated at 3100 μg/mL (Idexx Laboratories, Wetherby, UK) (normal level is ≤500 μg/mL [7]).
In this table, only parameters which were monitored repeatedly are shown; others for which only few (or no) results were available (e.g., aspartate aminotransferase), or which were not relevant to the progression of this case, are omitted. FCoV antibody titre and faecal FCoV RT-qPCR results are shown in Table 1. Day 0 is the day of the cat’s first diagnosis of FIP; Mutian was given between days 6 and 56, after which the cat was treated with 100,000 units of oral feline interferon omega.
Systemic treatment was instigated with prednisolone 5 mg sid for the uveitis (Table 3). The dose was reduced to 2.5 mg sid, then halted after 7 days and replaced with topical prednisolone acetate 1% ophthalmic suspension (Pred Forte®, Allergan, Dublin, Ireland), applied q8 h over two weeks. On the 6th day post presentation, treatment started with an oral adenosine nucleoside analogue (Mutian 200, Nantong Biotechnology, Nantong, China) [5] at 8 mg/kg q24 h in divided doses: this was double the normal dose, in an effort to ensure penetration into the eyeball. S-adenosyl-L-methionine supplementation was recommended to support the liver during Mutian treatment. The Mutian dose was reduced to 6 mg/kg on Day 25, but by then the cat’s weight had increased so that he required the same number of capsules per day.
An FCoV RT-qPCR on faeces (Veterinary Diagnostic Services, University of Glasgow, Scotland) [5] was performed to assess the susceptibility of the strain of FCoV infecting the cat to the antiviral being used; the result was low positive at the threshold cycle (CT) 30 then negative, showing that the virus was susceptible to the anti-viral (Table 1). Three of four housemates were also positive for FCoV RNA from their faeces (Table 1).
The cat’s weight rapidly increased following the onset of Mutian treatment, whereas it had reduced by 30 g (2.89 to 2.86 kg) while on prednisolone (Figure 2). After 40 days of Mutian, the cat had gained one kilogram (Figure 2). The Mutian dose was adjusted during treatment in accordance with the increase in weight.
Blood testing was repeated on the 13th day of Mutian treatment (18 days post diagnosis) (Table 2). Most importantly, the anaemia had reversed, the Hct had increased from 22.0 to 34.4% and bilirubin had fallen from 11 to 6 μmol/L. Globulin decreased to 57 g/L and albumin increased by 2 g/L, so that the albumin:globulin ratio increased from 0.31 to 0.46, which was still low but improving (Figure 3). Clinical examination revealed that his iris colour was returning to normal (Figure 1, Table 3) and there was an improvement in his sight; his guardian reported an increase in activity—playing with the other cats—and that he had tried to catch a bird. His faeces had regained normal consistency and frequency.
The Mutian dose was reduced to 6 mg/kg from the 20th day of treatment onwards and was stopped at 7 weeks for two reasons: AGP levels had returned to normal (400 μg/mL—normal is <500 μg/mL), and because his SDMA had risen to 28 μg/dL (reference range is below 14 μg/dL). Recombinant feline interferon omega (rFeIFN-ω; Virbagen Omega, Virbac, France) started at 100,000 units q24 h per os. SDMA reduced to 19 μg/dL on Day 62 (one week after Mutian was stopped) and to 14 μg/dL on Day 90, which was 35 days after Mutian was stopped (Table 2). Urinalysis performed on days 62, 90 and 153 revealed no abnormalities and the specific gravity was 1.050, 1.055 and >1.050, respectively. Weight gain continued after Mutian was discontinued and feline interferon omega was instigated (Figure 1), although at a slower rate (average of 9 g per day rather than 23 g per day).
The in-contact cats were successfully treated with Mutian at 4 mg/kg for five days to stop them shedding coronavirus, in order to prevent re-infection of the recovered cat; the faeces of all five cats were confirmed negative by RT-PCR (Table 1).

To our knowledge, this is the first published case of an oral adenosine nucleoside analogue followed by recombinant feline interferon being used to cure a cat of non-effusive FIP, and of AGP being used as a marker of recovery from FIP. We recommend SAMe supplementation be given along with Mutian to protect the liver, and monitor liver enzyme levels. SDMA levels in future cases following this FIP treatment protocol require further investigation. We suggest that systemic corticosteroids are contraindicated in FIP treatment other than for palliative purposes.

The cat’s treatment and laboratory testing was funded by J.C.-R. D.D.A. thanks the www.catvirus.com subscribers for their support during this study, and we are very grateful to the Angelica Fund donors for payment of publication fees.

We would like to thank the reviewers for the time they took to carefully study our paper and for their insightful comments: Table 1 and Table 3 were added due to their inquisitiveness. 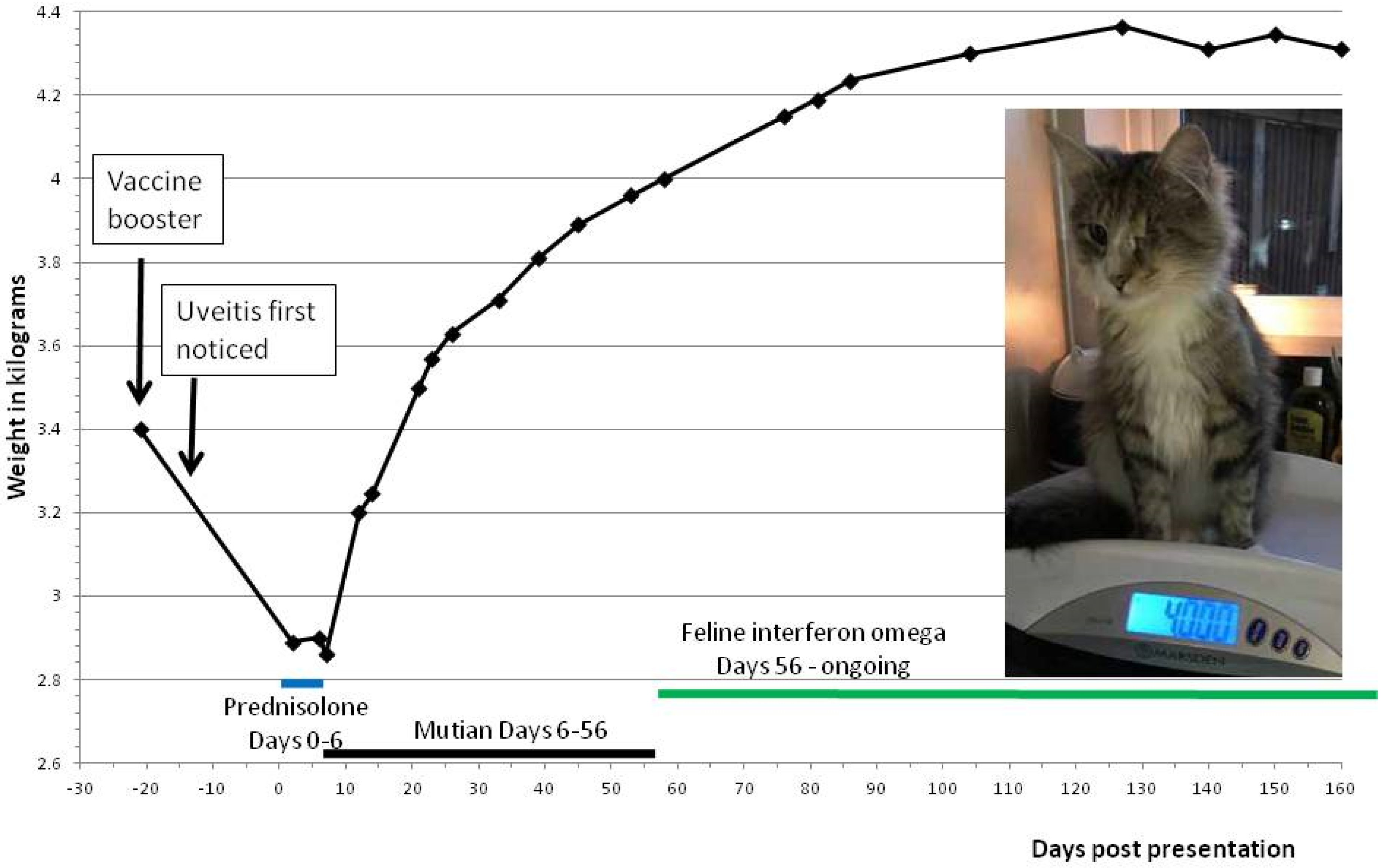 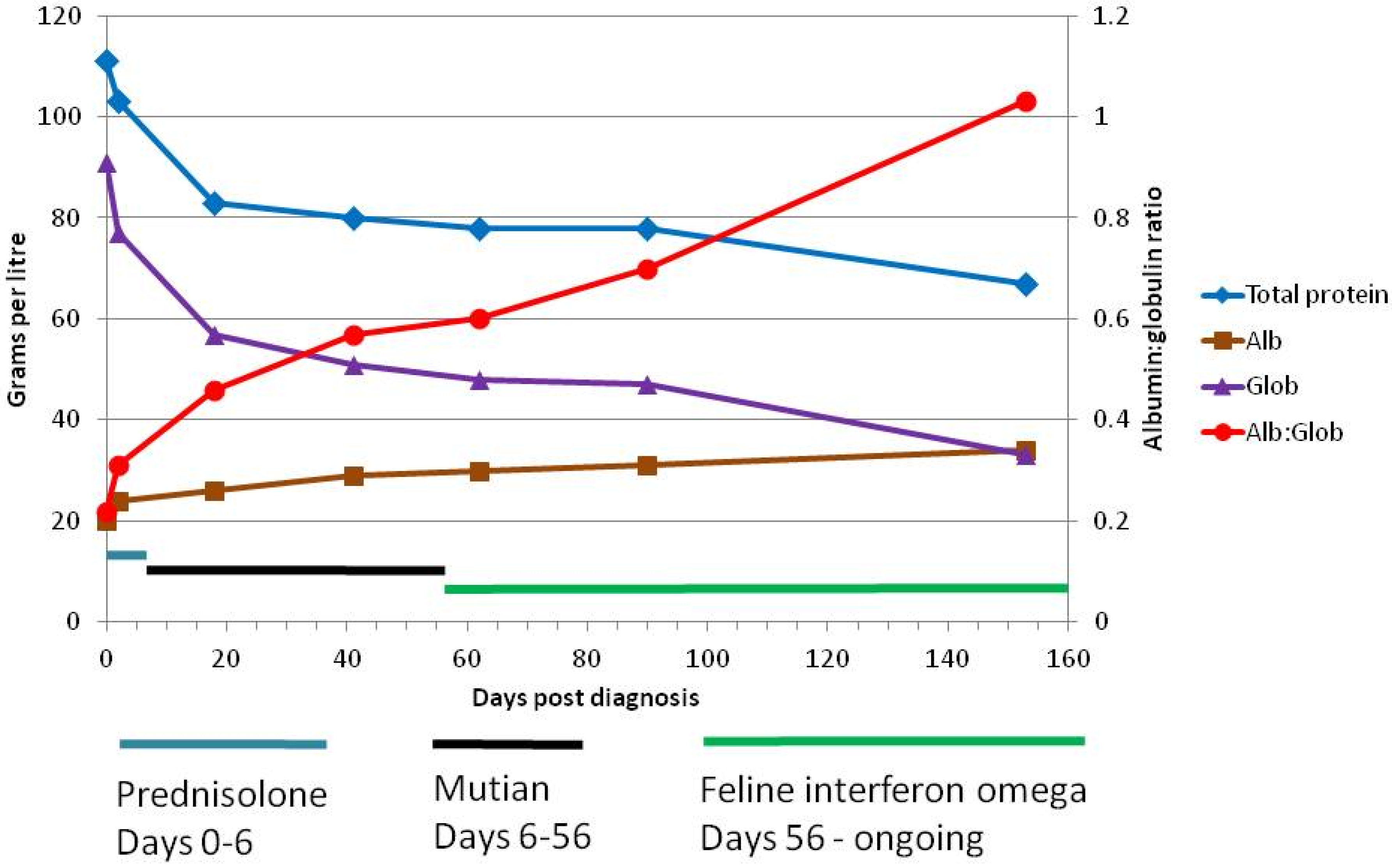