Seoul virus (SEOV), which causes hemorrhagic fever with renal syndrome (HFRS) in humans, has spread all over the world, especially in mainland China. Understanding basic mechanisms of SEOV evolution is essential to better combat and prevent viral diseases. Here, we examined SEOV prevalence and evolution in the residential area of four districts in Guangzhou city, China. The carriage of SEOV was observed in 33.33% of the sampled rodents, with 35.96% of the sampled Rattus norvegicus and 13.33% of R. tanezumi. Based on the comprehensive analyses of large (L), medium (M), and small (S) segments, our study first demonstrated that the genetic characterization of urban SEOV was shaped by high nucleotide substitution rates, purifying selection, and recombination. Additionally, we detected mutational saturation in the S segment of SEOV, which may lead to the biases of genetic divergence and substitution rates in our study. Importantly, we have filled the gap of SEOV evolution in the urban area. The genetic variation of SEOV may highlight the risk of HFRS, which merits further investigation. View Full-Text
Keywords: evolution; purifying selection; recombination; Rattus norvegicus; Seoul virus; substitution rate; urbanization; mutational saturation evolution; purifying selection; recombination; Rattus norvegicus; Seoul virus; substitution rate; urbanization; mutational saturation
►▼ Show Figures 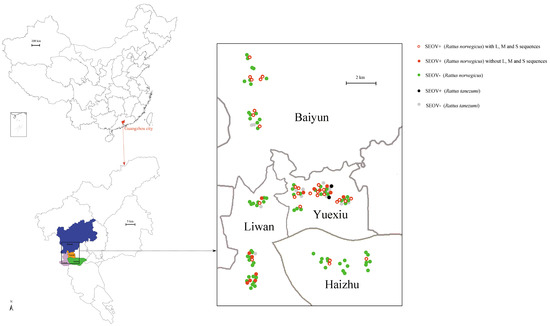