Parechovirus A Pathogenesis and the Enigma of Genotype A-3

Enteroviruses are small RNA viruses that cause diseases with various symptoms ranging from mild to severe. Enterovirus proteins are translated as a single polyprotein, which is cleaved by viral proteases to release capsid and nonstructural proteins. Here, we show that also cellular calpains have a potential role in the processing of the enteroviral polyprotein. Using purified calpains 1 and 2 in an in vitro assay, we show that addition of calpains leads to an increase in the release of VP1 and VP3 capsid proteins from P1 of enterovirus B species, detected by western blotting. This was prevented with a calpain inhibitor and was dependent on optimal calcium concentration, especially for calpain 2. In addition, calpain cleavage at the VP3-VP1 interface was supported by a competition assay using a peptide containing the VP3-VP1 cleavage site. Moreover, a mass spectrometry analysis showed that calpains can cleave this same peptide at the VP3-VP1 interface, the cutting site being two amino acids aside from 3C’s cutting site. Furthermore, we show that calpains cannot cleave between P1 and 2A. In conclusion, we show that cellular proteases, calpains, can cleave structural proteins from enterovirus polyprotein in vitro. Whether they assist polyprotein processing in infected cells remains to be shown. View Full-Text
Keywords: enterovirus; calpain; proteolytic processing; RNA virus; polyprotein enterovirus; calpain; proteolytic processing; RNA virus; polyprotein
►▼ Show Figures 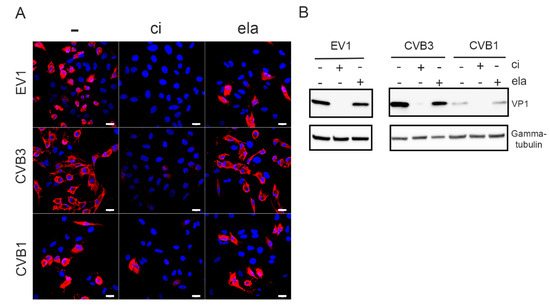