Simian Foamy Viruses in Central and South America: A New World of Discovery
Next Article in Special Issue

Increasing attention has focused on the contributions of persistent microbial infections with the manifestation of disease later in life, including neurodegenerative conditions such as Alzheimer’s disease (AD). Current data has shown the presence of herpes simplex virus 1 (HSV-1) in regions of the brain that are impacted by AD in elderly individuals. Additionally, neuronal infection with HSV-1 triggers the accumulation of amyloid beta deposits and hyperphosphorylated tau, and results in oxidative stress and synaptic dysfunction. All of these factors are implicated in the development of AD. These data highlight the fact that persistent viral infection is likely a contributing factor, rather than a sole cause of disease. Details of the correlations between HSV-1 infection and AD development are still just beginning to emerge. Future research should investigate the relative impacts of virus strain- and host-specific factors on the induction of neurodegenerative processes over time, using models such as infected neurons in vitro, and animal models in vivo, to begin to understand their relationship with cognitive dysfunction. View Full-Text
Keywords: herpes simplex virus 1; neuron; Alzheimer’s disease; virus strain; neuroinflammation herpes simplex virus 1; neuron; Alzheimer’s disease; virus strain; neuroinflammation
►▼ Show Figures 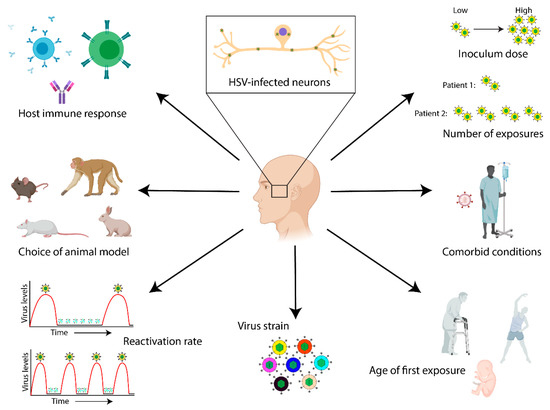 
Mangold, Colleen A.; Szpara, Moriah L. 2019. "Persistent Infection with Herpes Simplex Virus 1 and Alzheimer’s Disease—A Call to Study How Variability in Both Virus and Host may Impact Disease." Viruses 11, no. 10: 966.