The aim of this study was to identify respiratory viruses circulating amongst elite racehorses in a training yard by serological testing of serial samples and to determine their impact on health status and ability to race. A six-month longitudinal study was conducted in 30 Thoroughbred racehorses (21 two-year-olds, five three-year-olds and four four-year-olds) during the Flat racing season. Sera were tested for the presence of antibodies against equine herpesvirus 1 and 4 (EHV-1 and EHV-4) and equine rhinitis viruses A and B (ERAV and ERBV) by complement fixation (CF) and equine arteritis virus (EAV) by ELISA. Antibodies against equine influenza (EI) were measured by haemagglutination inhibition (HI). Only ERAV was circulating in the yard throughout the six-month study period. Seroconversion to ERAV frequently correlated with clinical respiratory disease and was significantly associated with subsequent failure to race (p = 0.0009). Over 55% of the two-year-olds in the study seroconverted to ERAV in May and June. In contrast, only one seroconversion to ERAV was observed in the older horses. They remained free of any signs of respiratory disease and raced successfully throughout the study period. The importance of ERAV as a contributory factor in the interruption of training programmes for young horses may be underestimated.
Keywords: equine rhinitis virus A; Thoroughbred racehorses; loss of performance equine rhinitis virus A; Thoroughbred racehorses; loss of performance

Equine respiratory infection together with lameness are the most common reasons for loss of training days and inability to race [1]. The main viruses associated with respiratory disease and loss of performance in racehorses are equine influenza virus (EI), equine herpesvirus 1 and 4 (EHV-1 and EHV-4) and equine rhinitis viruses A and B (ERAV and ERBV).
EI is a highly contagious virus and outbreaks of influenza may necessitate the cancellation of race meetings and other equestrian events [2]. However, in 1981, mandatory vaccination against EI was introduced for Thoroughbred racehorsesin Ireland and since then, no race meetings have been cancelled due to EI. However, outbreaks continue to occur in vaccinated horses, and young racehorses are particularly susceptible [3,4,5]. The return to athletic normality can be prolonged by damage to the mucociliary clearance mechanism and secondary bacterial infections [6].
EHV-1 and -4 circulate in horse populations worldwide and are associated with respiratory disease in horses, immunosuppression, reduced performance, abortion and occasionally, neurological disease [7,8,9]. Although there is no mandatory vaccination programme for EHV-1 and -4 in Ireland, some trainers vaccinate their horses in an effort to reduce the virus challenge in their yards.
ERAV and ERBV have also been identified worldwide in both healthy horses and horses with clinical respiratory signs [10,11,12,13,14,15,16]. A seroprevalence of 57% and 71% for ERAV and ERBV was recorded for Thoroughbred yearlings in Kentucky [17] and seroconversion to ERAV is common among young horses on entry to training yards [18,19,20]. Furthermore, ERBV was isolated in 30% of the horses with acute respiratory diseases in a Canadian survey [10].
There is a need for serological surveys to identify the viruses associated with economic loss in the racing industry. Longitudinal surveillance studies contribute to our understanding of the epidemiology of equine respiratory diseases in different countries and in different populations of horses. The aim of this serological study was to identify respiratory viruses circulating amongst elite racehorses of different ages in a training yard in Ireland and to determine their impact on health status and ability to race.

A six-month longitudinal study was conducted in 30 Thoroughbred racehorses during the Flat season. All the horses originated from the same stud farm and were in training with the same trainer. There were three different age groups of horses; the main group, i.e., 21 (70%) horses were two years of age, five (17%) of the horses were three years old and four (13%) were four years old. The two-year-old horses were in training for their first season. All the horses had been vaccinated against EI and EHV1 prior to entering the training yard.
At the request of the owner, whole blood samples were collected by the veterinary surgeon at monthly intervals from April to September. These were for routine serological screening and archiving as the “acute” samples for the testing of paired sera (“acute” and “convalescent”) in the event of an outbreak of respiratory disease. Additional blood samples were collected from horses with respiratory disease in mid-May.
Similarly to previous longitudinal studies of Thoroughbred racehorses in training [21,22,23], sera were tested for presence of antibodies against ERAV, ERBV, EHV-1 and EHV-4 using the Complement fixation (CF) test (Table S1). The test was performed as described by Thomson et al. [24], using guinea pig complement and sensitized sheep erythrocytes. Serial twofold dilutions of sera from 1:5 to 1:640 were tested. Sera were tested for antibodies against EI H7N7 and H3N8 viruses using the Haemagglutination Inhibition (HI) test. The sera were pretreated with potassium periodate, inactivated for 30 min at 56 °C (±1 °C) and tested as described previously [25]. Seroconversion was defined as a 4-fold or higher rise in CF or HI antibody titers. Sera were tested for the presence of antibodies against equine arteritis virus (EAV) by indirect ELISA (ID Screen® Equine Viral Arteritis Indirect -Grabels, France).
A Chi-squared test was used to test the association of seroconversion with subsequent failure to race. The data was summarised in 2 × 2 contingency tables and an analysis was conducted in the R statistical software package version 3.5.1. The statistical significance was set at α = 0.05.

The authors wish to thank the staff in the serology laboratory of the Irish Equine Centre, the owner and trainer without whom this study would not have been possible and Marie Garvey for assistance with manuscript preparation. 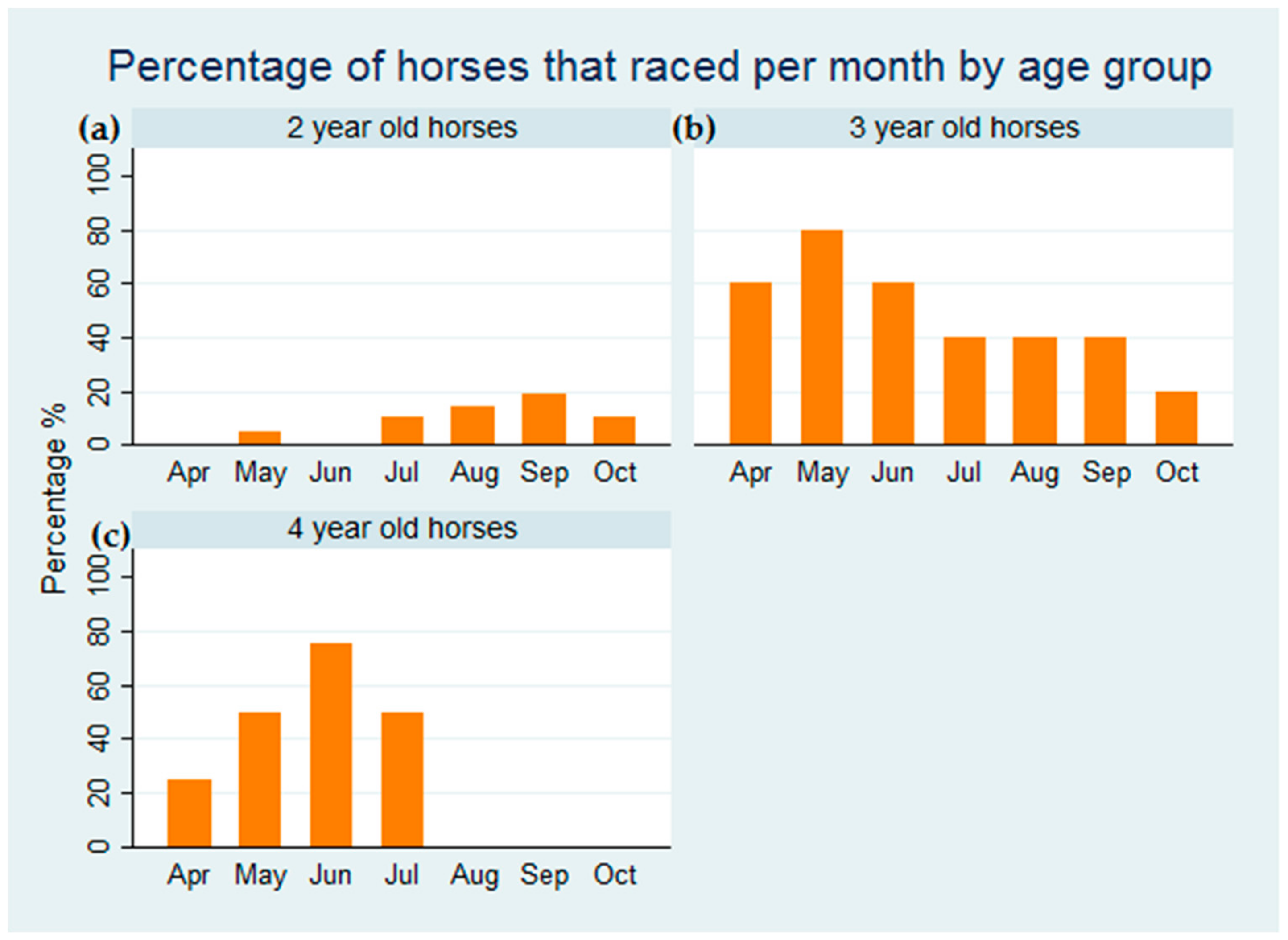