The aim of this study was to identify respiratory viruses circulating amongst elite racehorses in a training yard by serological testing of serial samples and to determine their impact on health status and ability to race. A six-month longitudinal study was conducted in 30 Thoroughbred racehorses (21 two-year-olds, five three-year-olds and four four-year-olds) during the Flat racing season. Sera were tested for the presence of antibodies against equine herpesvirus 1 and 4 (EHV-1 and EHV-4) and equine rhinitis viruses A and B (ERAV and ERBV) by complement fixation (CF) and equine arteritis virus (EAV) by ELISA. Antibodies against equine influenza (EI) were measured by haemagglutination inhibition (HI). Only ERAV was circulating in the yard throughout the six-month study period. Seroconversion to ERAV frequently correlated with clinical respiratory disease and was significantly associated with subsequent failure to race (p = 0.0009). Over 55% of the two-year-olds in the study seroconverted to ERAV in May and June. In contrast, only one seroconversion to ERAV was observed in the older horses. They remained free of any signs of respiratory disease and raced successfully throughout the study period. The importance of ERAV as a contributory factor in the interruption of training programmes for young horses may be underestimated. View Full-Text
Keywords: equine rhinitis virus A; Thoroughbred racehorses; loss of performance equine rhinitis virus A; Thoroughbred racehorses; loss of performance
►▼ Show Figures 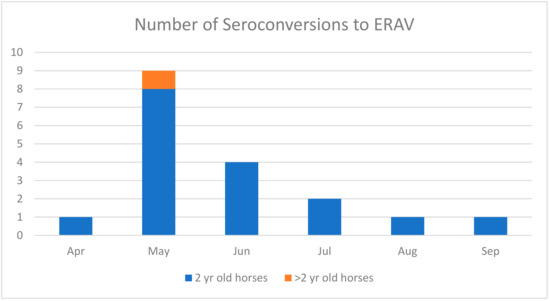