Bicistronic transgene expression is currently essential in gene therapy and biomedical research. The application of internal ribosome entry site (IRES) elements can co-express dual heterologous transgene products from a message RNA driven by a single promoter [1,2]. Generally, translation in eukaryotes begins at the 5’ end cap of the mRNA molecule, where translation initiation factors are recruited [3,4,5,6]. On the other hand, IRES elements that mimic the 5’ cap structure allow for translation in an RNA cap-independent manner [7,8]. The process is assisted by diverse RNA binding proteins and ribosomal subunits [9,10,11]. Trans-acting factors vary with distinct IRES elements, resulting in different translational efficiencies based on cell types and cellular conditions [12]. One type of IRES element that is derived from encephalomyocarditis virus (EMCV) has been widely used for pharmaceutical and biomedical applications. It initiates a higher translation efficiency than other viral and non-viral IRES elements [13,14]. Nevertheless, it is well accepted that the efficiency of the IRES-governed downstream open reading frame (ORF) translation is lower than that of the cap structure-governed upstream ORF translation. In most cases, it is between 5% and 50%, regardless of transgene delivery methods [15].
Gene delivery in hematopoietic stem/progenitor cells (HSPCs), T and B lymphocytes is promising for the treatment of both inherited and acquired diseases. Many approaches using viral vectors have been considered to achieve gene therapy for hematologic diseases [16,17,18,19,20]. However, the widespread clinical use of these vectors has long been hampered by limitations in efficacy and safety. For example, in phase I/II clinical trials, genetic modification was achieved in only 9–14% of blood cells after transplant of a self-inactivating lentiviral vector [21]. Although in the laboratory nearly 100% expression of GFP transgenes in human CD34+ cells can be achieved in vitro [22,23,24], the lentiviral vectors are considered to potentially induce cancer by the dysregulation of cell growth, mutagenesis, and reorganization. This is one of the greatest challenges for hematologic gene therapy clinical trials.
Based on a nonpathogenic parvovirus, the recombinant adeno-associated virus (rAAV) vector has been developed as a gene therapy drug [25]. Initially, Song, et al. evaluated the transduction efficiency of all available rAAV serotype vectors (rAAV1-rAAV10) and observed that rAAV6 was the most efficient in human HSPCs [26]. In addition, the transduction efficiency can be further improved by specifically mutating surface-exposed tyrosine residues to phenylalanine (Y445F, Y705F or Y731F) on the rAAV6 capsid [27]. Based on these findings, a number of research groups have achieved efficient gene editing with the help of rAAV6 vectors in human hematopoietic cells [28,29,30]. Most recently, a combined strategy was documented for potential genome editing in hematopoietic cells, with which a transduction efficiency exceeding ~90% can be achieved by a capsid-optimized rAAV6 vector. In the present study, based on the capsid-optimized rAAV6 vectors, we characterized the inhibitory effect of the EMCV IRES element on the downstream transgene expression in hematopoietic cells. Our results could contribute to broadening the understanding of IRES-mediated transgene inhibition in hematopoietic cells and provide an optimal strategy to co-express dual genes using capsid-optimized rAAV6 vectors for potential gene therapy.

Polyethylenimine (PEI) and Lipofectamine 2000 were purchased from Sigma-Aldrich (St. Louis, MO, USA) and Invitrogen (Thermo, Waltham, MA, USA), respectively. Electrotransformation was performed using 1 × 106 K562 cells/reaction and 5 μg of plasmids (pAAV-CMVp-gfp, 1000 ng/μL). The cells were resuspended in electroporation buffer with specific plasmids (pAAV-CMVp-gfp, 1000 ng/μL), and the suspensions were transferred into cuvettes and electroporated at 360 V for 30 ms using an electroporator (Celetrix, Manassas, VA, USA). K562 cells were transferred to a six-well plate and cultured in complete culture medium immediately after electroporation. Flow cytometry was carried out at 72 hours post-transduction.

AAV was packaged by a PEI-mediated triple-plasmid transfection method [31]. The plasmids of the gene of interest, capsid protein plasmid (pACG2-C6-3M, which was mutated at three surface-exposed amino acids including T492V, Y705F, and Y731F), and pHelper plasmid were simultaneously transferred into the HEK293 cells. At 72 hours after transfection, HEK293 cells were collected and ruptured by repeated freezing and thawing. The purification methods of the viral vectors included density gradient centrifugation in iodixacol solution and filtration in a HiTrap Q HP ion-exchange column. Quantitative real-time PCR (qRT-PCR) was performed using the 2xT5 SYBR Green Fast qPCR Mix kit (TSE202, Tsingke Biological Technology, Beijing, China) to determine the virus titer.

Transduction assays were performed as previously described [32,33]. Briefly, adherent cells (HEK293, Huh7 and HeLa), suspension cells (K562, THP-1 and Jurkat), as well as primary CD34+ HSCs and CD4+ T cells were transduced with purified AAV vectors at an MOI of 10,000 vgs/cell. All the AAV transductions were carried out in FBS-free medium for 2 hours. Cells were then switched to FBS-containing medium for growth. At 72 hours post-infection, the transgene delivery efficiency was quantified by the percentage of GFP-positive or Fluc-positive cells using flow cytometry or firefly luciferase assay. Alternatively, GFP expression was analyzed under fluorescence microscopy and quantitated by Image J software (National Institutes of Health, Bethesda, MD, USA).

Lentivirus (LV) was produced by transfecting 293T cells with a plasmid (pLV-EMCV IRES-gfp) encoding the lentivirus and two packaging plasmids (pMD2.G and psPAX2) [32]. The supernatant harboring the lentivirus particles was harvested at 48 hours post-transduction. Subsequently, HEK293 and K562 cells were infected with the supernatant and incubated for 6 hours with 8 mg/mL of hexadimethrine bromide (Polybrene, Sigma-Aldrich, St. Louis, MO, USA) before reverting to normal medium. The transgene expression was detected by flow cytometry at 7 days post-infection, indicating the percentage of GFP-positive cells.

Firefly luciferase detection was performed with a Firefly Luciferase Reporter Gene Assay Kit (RG005, Beyotime Biotechnology, Shanghai, China). Transduced cells were collected after 3 days, rinsed with PBS, and lysed in cell lysis buffer in an ice bath for 30 min. The liquid supernatant was collected after centrifugation at 3500 rcf for 15 min. An equivalent amount of luciferase detection reagent was added to the samples, and the chemiluminescence was detected in a multifunctional enzyme-labeling apparatus (Synergy™ 2, BioTek, Winooski, VT, USA).

All experiments were performed in triplicate at least. The software GraphPad Prism 5.0 (GraphPad, San Diego, CA, USA) was used for statistical analyses of the data, which are shown as the mean ± the standard deviation (S.D). Differences between two groups were compared using the nonparametric Mann–Whitney U test; a one-way ANOVA followed by Dunnett’s test was used in the case of three or more groups. A p value < 0.05 was considered as significantly different: p < 0.05 (*), p < 0.01 (**), p < 0.001 (***).

3.3. EMCV IRES Had a Similar Inhibitory Effect on the Double-Transgene Vector in Hematopoietic Cells

The relative rAAV6 genome contents were compared by using GFP primers and ITR primers. They showed a similar trend in qPCR assay, as shown in Figure 5A. Therefore, GFP primers were used in subsequent experiments. Next, we examined the GFP content at the genome, transcriptional, and translational levels in both HEK293 and K562 cells. Expression vectors harboring an EMCV IRES element showed similar GFP content to that of their counterparts without the IRES element at the mRNA level, as well as a three- to four-fold decrease of the protein level in HEK293 cells (Figure 5B). In contrast, a reduction of nearly 1,000-fold was observed at the level of translational product in K562 cells, with only a three-fold decrease in the mRNA level (Figure 5C). These results indicated that the inhibitory effect of EMCV IRES occurred during mRNA–protein transition. The differential expressions of key IRES binding proteins [36] including Gemin5, PTBP1, and PCBP2 were also analyzed between the HEK293 and K562 cells (Figure 5D). We found that PTBP1 was lower in the K562 cells than that in the HEK293 cells. PCBP2 expression was not detected in the mock group of K562 cells. These results suggest that PTBP1 and PCBP2 may be involved in the closure of EMCV IRES-mediated downstream gene expression in hematopoietic cells. In addition, methylation status of the CMV promoter in rAAV6 genomes was detected by bisulfite sequencing. Almost no methylation was found in the CMV promoter with or without the EMCV IRES element (data not shown) [37].
We next constructed five EMCV IRES-harboring vectors at different positions to evaluate whether GFP expression is dependent on the IRES position (Table 1). We observed that the GFP expression was 0.90 ± 0.66% of positive cells, which was extremely inhibited only when the IRES element was located between a promoter and the transgene. This indicated that the inhibition of transgene expression by IRES-harboring vectors was dependent on the IRES position in hematopoietic cells.

According to the above results, we found that EMCV IRES-containing bicistronic vectors almost could not express the target protein in K562 cells in most cases. To realize dual protein expression in hematopoietic cells with high efficiency, we investigated five additional IRESs that originated from viruses (HCV IRES), cells (c-myc IRES; YAP1 IRES), or artificial synthesis ((PPT19)4 IRES; KMI2 IRES). As indicated in Figure 6A, not all types of IRES could shut down GFP expression in K562 cells. Among them, c-myc IRES, YAP1 IRES, and (PPT19)4 IRES had the ability to mediate GFP expression. Moreover, we used another two approaches to design vectors: the intergenic insertion of a viral self-cleaving 2A peptide sequence and fusion gene (Figure 6B,C). The results demonstrate that the Fluc signal intensities of the pAAV-CMVp-fluc-2A-gfp group and pAAV-CMVp-fluc-gfp group were remarkably higher than that of the pAAV-CMVp-fluc-EMCV IRES-gfp group. This suggests that the 2A peptide and fusion gene methods are more appropriate for the transgene expression of bicistronic vectors in hematopoietic cells (Figure 6D).

J.C. and C.Z. provided the concept and design of the article. Q.Z., X.Z., C.Y., and C.Z. conducted experiments and collected and analyzed data, as well as drafting the manuscript. H.Y., J.X., Y.X. and J.C. carried out partial experiments, revised the manuscript or searched through the literature. All authors were involved in reviewing the manuscript and gave final approval of the submitted and published versions.

This research was supported by the Innovative Research Team Grant from Taizhou local government (Zhejiang Province, China) to Chenghui Yu and Jinzhong Chen, and was partially supported by China Postdoctoral Science Foundation (2019M651381) to Chen Zhong. The authors also wish to thank Ming Yang at the Fudan University, China, for technical assistance.

The authors thank Xiaofei Li for the optimization of transduction of rAAV6 vectors, Chen Liu at the Rutgers NJMS and RWJ Medical School, USA, for providing the hepatocellular carcinoma cell line Huh7, and Chen Ling at the Fudan University, China, for critically proof-reading the manuscript. 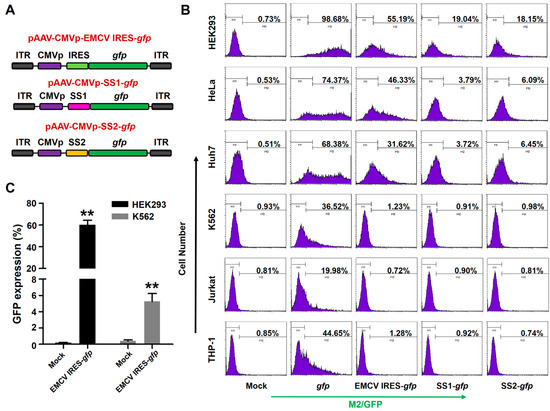 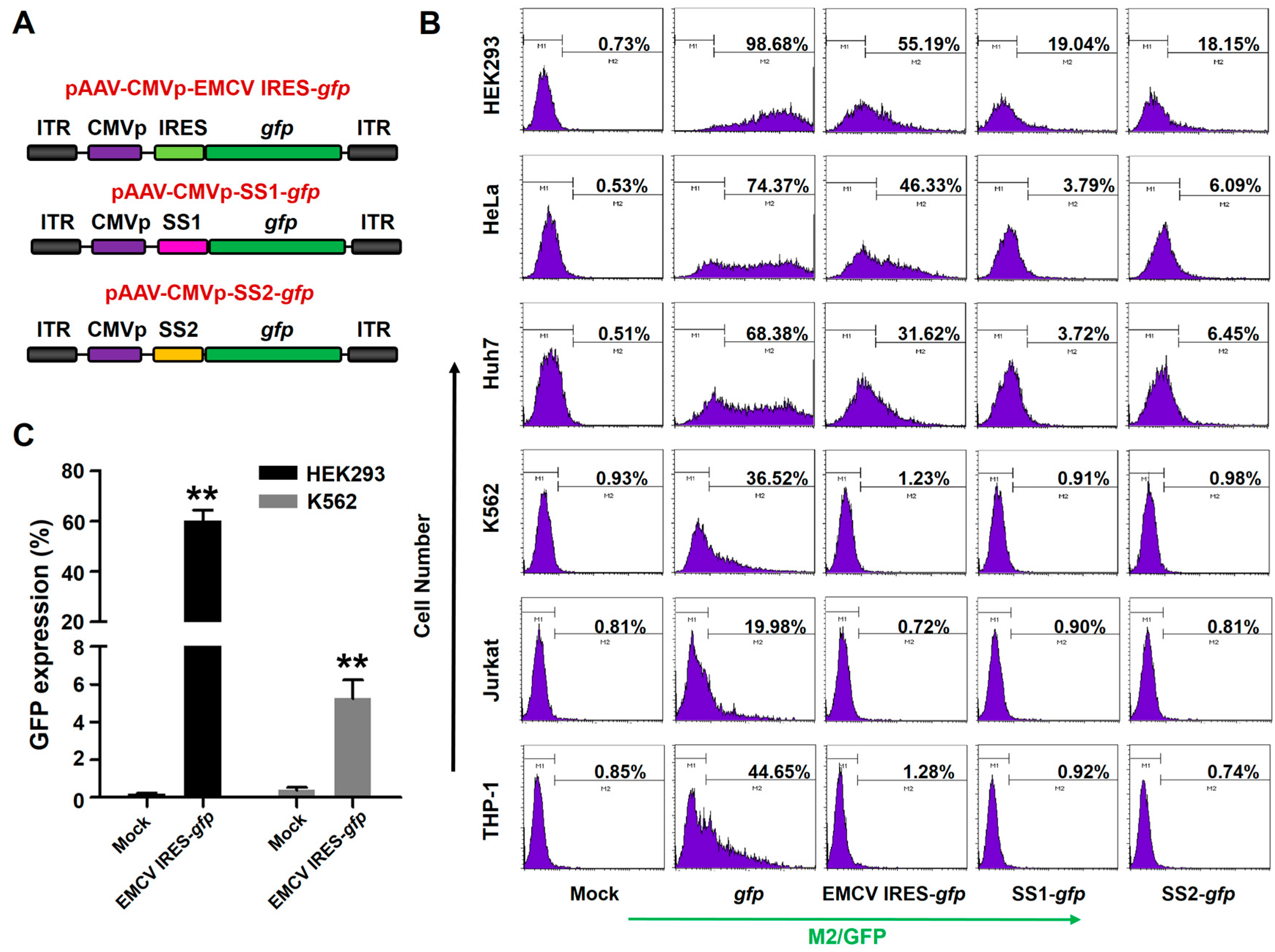 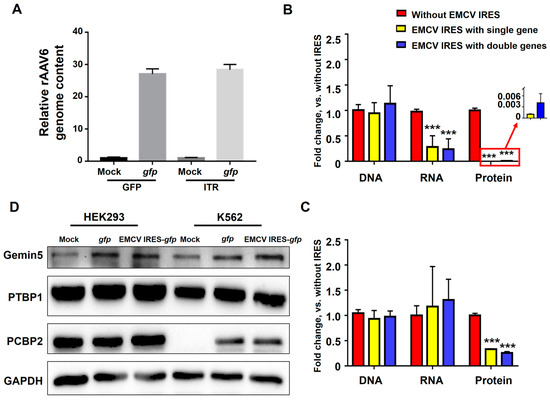 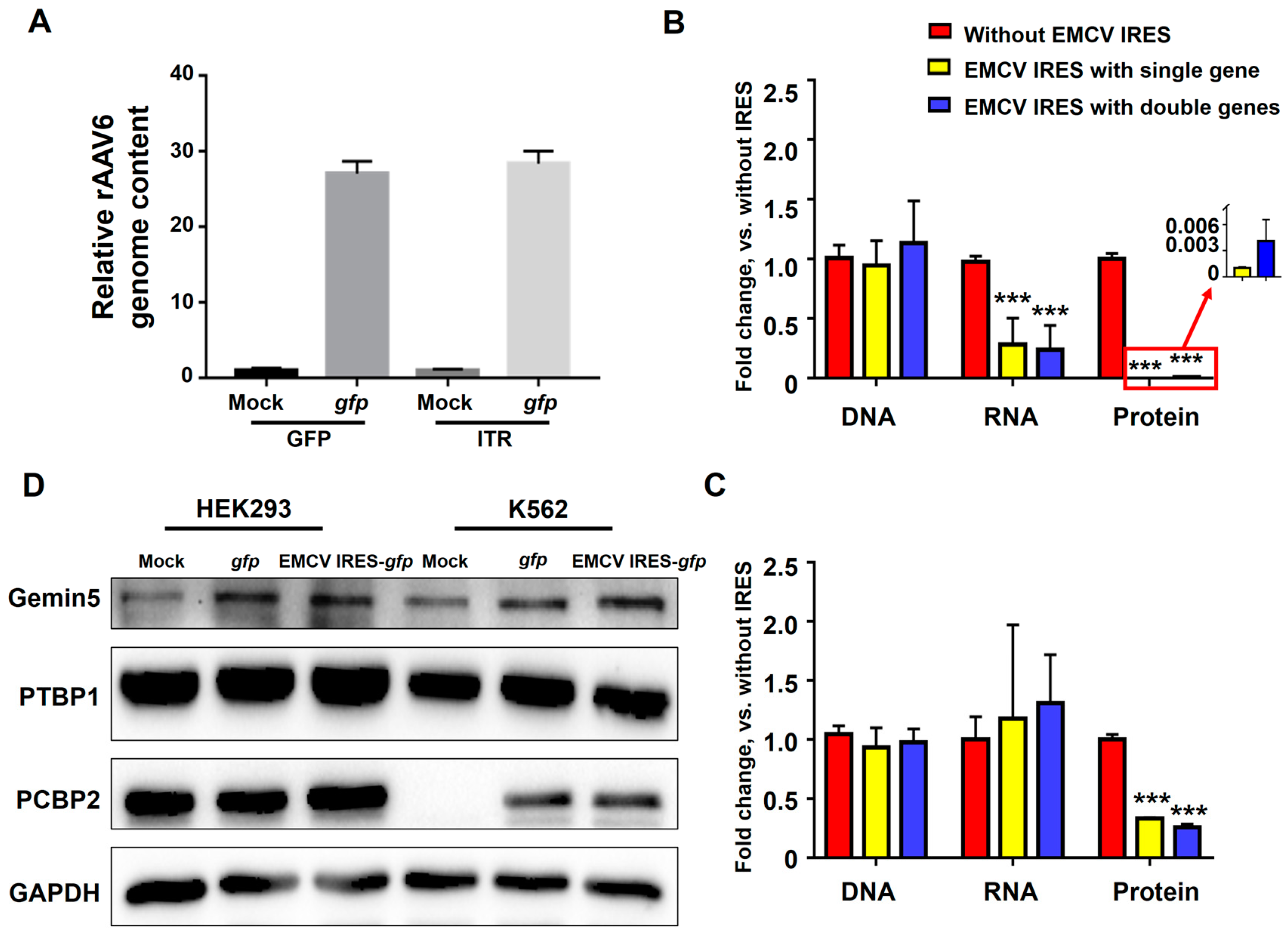