Human parechovirus (HPeV), particularly type 3 (HPeV3), is an important cause of sepsis-/meningitis-like illness in young infants. Laboratory records identified a total of ten HPeV-positive cases in Southeastern Australia between January and July 2019. The HPeV present in these cases were typed by Sanger sequencing of the partial viral capsid protein 1 (VP1) region and selected cases were further characterised by additional Sanger or Ion Torrent near-full length virus sequencing. In seven of the ten cases, an HPeV type 5 (HPeV5) was identified, and in the remaining three cases, an HPeV type 1 was identified. The HPeV5-positive cases were infants under the age of 3 months admitted to hospital with fever, rash, lethargy and/or sepsis-like clinical signs. Near full-length virus sequencing revealed that the HPeV5 was most likely a recombinant virus, with structural genes most similar to an HPeV5 from Belarus in 2018, and a polymerase gene most similar to an HPeV3 from Australia in 2013/14. While HPeV5 is not typically associated with severe clinical signs, the HPeV5 identified here may have been able to cause more severe disease in young infants through the acquisition of genes from a more virulent HPeV. View Full-Text
Keywords: parechovirus; picornaviral epidemiology; recombination; genome sequencing parechovirus; picornaviral epidemiology; recombination; genome sequencing
►▼ Show Figures 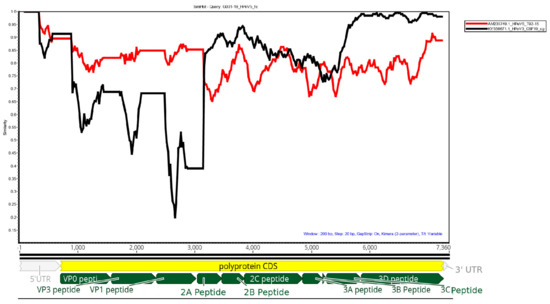