Dengue is the most rapidly spreading viral disease transmitted by the bite of infected Aedes mosquitos. The pathogenesis of dengue is still unclear; although host immune responses and virus serotypes have been proposed to contribute to disease severity. In this study, we examined the circulating dengue virus (DENV) and measured plasma levels of inflammatory mediators. Ninety-eight patients during a dengue outbreak in eastern India in 2016 were included in the study. The presence of DENV was demonstrated by detecting NS1 antigen; IgM capture ELISA and serotypes were discriminated by type-specific RT-PCR and/or sequencing. Plasma samples were assayed for 41-plex cytokine/chemokines using multiplex Luminex assay. Eighty-five (87%) samples were positive by NS1/IgM capture ELISA/RT-PCR. All four serotypes of DENV were detected in this outbreak, with DENV-2 as the predominant type, seen in 55% of cases. Mixed infections were seen in 39% of subjects. Among the host inflammatory biomarkers, GM-CSF, IFN-γ, IL-10, IL-15, IL-8, MCP-1, IL-6, MIP-1β, and TNF-α levels were significantly increased in dengue with and without warning signs, in severe dengue patients in comparison to healthy controls. Four cytokines IFN-γ, GM-CSF, IL-10, and MIP-1β correlated significantly with disease severity and could serve as potential predictor for disease severity. Information on the host biomarkers and the dengue serotype may help guide in optimizing effective intervention strategies. View Full-Text
Keywords: Arbovirus; Dengue; Cytokine; Luminex-bead assay; Inflammation; Severe dengue Arbovirus; Dengue; Cytokine; Luminex-bead assay; Inflammation; Severe dengue
►▼ Show Figures 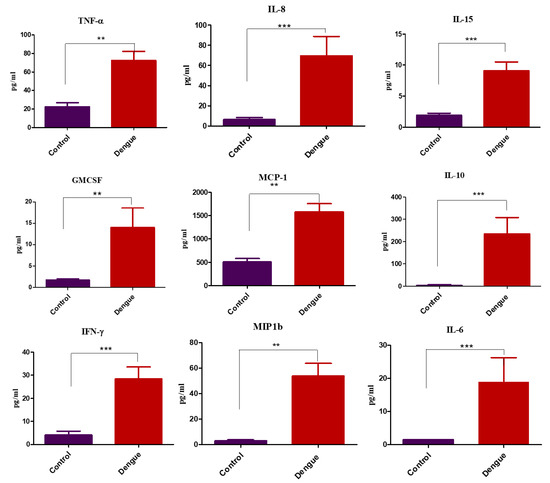