Genetic engineering of viruses has generally been challenging. This is also true for archaeal rod-shaped viruses, which carry linear double-stranded DNA genomes with hairpin ends. In this paper, we describe two different genome editing approaches to mutate the Sulfolobus islandicus rod-shaped virus 2 (SIRV2) using the archaeon Sulfolobus islandicus LAL14/1 and its derivatives as hosts. The anti-CRISPR (Acr) gene acrID1, which inhibits CRISPR-Cas subtype I-D immunity, was first used as a selection marker to knock out genes from SIRV2M, an acrID1-null mutant of SIRV2. Moreover, we harnessed the endogenous CRISPR-Cas systems of the host to knock out the accessory genes consecutively, which resulted in a genome comprised solely of core genes of the 11 SIRV members. Furthermore, infection of this series of knockout mutants in the CRISPR-null host of LAL14/1 (Δarrays) confirmed the non-essentiality of the deleted genes and all except the last deletion mutant propagated as efficiently as the WT SIRV2. This suggested that the last gene deleted, SIRV2 gp37, is important for the efficient viral propagation. The generated viral mutants will be useful for future functional studies including searching for new Acrs and the approaches described in this case are applicable to other viruses. View Full-Text
Keywords: anti-CRISPR-based genome editing; selection marker; CRISPR-based genome editing; core genome; accessory genes; essentiality; virus-host interaction anti-CRISPR-based genome editing; selection marker; CRISPR-based genome editing; core genome; accessory genes; essentiality; virus-host interaction
►▼ Show Figures 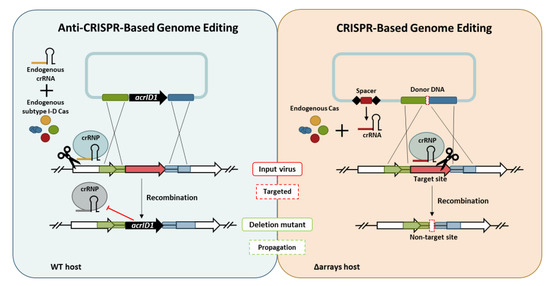