Palaeoecological Evidence for Survival of Scots Pine through the Late Holocene in Western Ireland: Implications for Ecological Management
Previous Article in Journal

The application of a harvester for thinning operations in young stands can pose several dilemmas. Firstly, the value of the timber obtained should be higher than the cost of the thinning operation—this is especially difficult with young stands, where the timber is of a small size and productivity is low. In addition, small harvesters used for thinning usually have short cranes, less than 10 m in length, which is rather impractical in stands where the distance between strip roads is a standard 20 m. The aim of this research was to select the best mechanised thinning operation, taking into account economic suitability and some environmental aspects (damage to the remaining stand and density of strip roads). The research was carried out in a 31-year-old pine stand (11.27 ha) in which three different harvester thinning (T) operations were designed: TM1) with midfield and one harvester pass, TM2) with midfield and two harvester passes and TWM) without midfield and one harvester pass. In all the proposed operations, a Vimek 404 T5 harvester (with a 4.6 m-long crane) and a Vimek 606 TT forwarder were used. The most economic operation was TWM, with a total cost of €13.73 m−3, while TM1 was 13% more expensive at €15.51 m−3. The lowest level of damage, 1.5%, was recorded in TWM, while in TM1 the level was 2.1%. The TWM operation required a net of strip roads twice as dense as in TM1. Taking into account all the analysed aspects, a thinning operation with midfield and one harvester pass is recommended when using the Vimek 404 T5 harvester and the Vimek 606 TT forwarder in the first thinning of a pine stand. View Full-Text
Keywords: early thinning; strip roads; productivity; costs; damage; Vimek early thinning; strip roads; productivity; costs; damage; Vimek
►▼ Show Figures 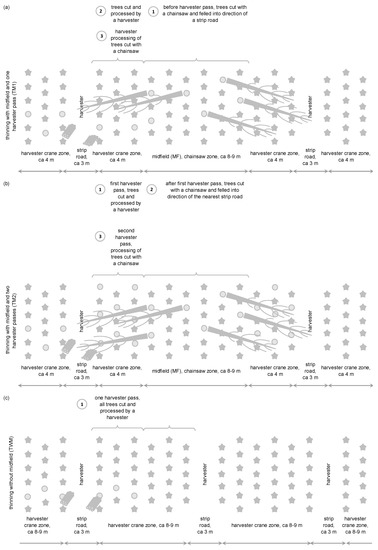