Most populations of Scots pine in Spain are locally adapted to drought, with only a few populations at the southernmost part of the distribution range showing maladaptations to the current climate. Increasing tree heights are predicted for most of the studied populations by the year 2070, under the RCP 8.5 scenario. These results are probably linked to the capacity of this species to acclimatize to new climates. The impact of climate change on tree growth depends on many processes, including the capacity of individuals to respond to changes in the environment. Pines are often locally adapted to their environments, leading to differences among populations. Generally, populations at the margins of the species’ ranges show lower performances in fitness-related traits than core populations. Therefore, under expected changes in climate, populations at the southern part of the species’ ranges could be at a higher risk of maladaptation. Here, we hypothesize that southern Scots pine populations are locally adapted to current climate, and that expected changes in climate may lead to a decrease in tree performance. We used Scots pine tree height growth data from 15-year-old individuals, measured in six common gardens in Spain, where plants from 16 Spanish provenances had been planted. We analyzed tree height growth, accounting for the climate of the planting sites, and the climate of the original population to assess local adaptation, using linear mixed-effect models. We found that: (1) drought drove differences among populations in tree height growth; (2) most populations were locally adapted to drought; (3) tree height was predicted to increase for most of the studied populations by the year 2070 (a concentration of RCP 8.5). Most populations of Scots pine in Spain were locally adapted to drought. This result suggests that marginal populations, despite inhabiting limiting environments, can be adapted to the local current conditions. In addition, the local adaptation and acclimation capacity of populations can help margin populations to keep pace with climate change. Our results highlight the importance of analyzing, case-by-case, populations’ capacities to cope with climate change. View Full-Text
Keywords: climate change; gene flow; local adaptation; maladaptation; mixed-models; phenotypic plasticity; phenotypic variation climate change; gene flow; local adaptation; maladaptation; mixed-models; phenotypic plasticity; phenotypic variation
►▼ Show Figures 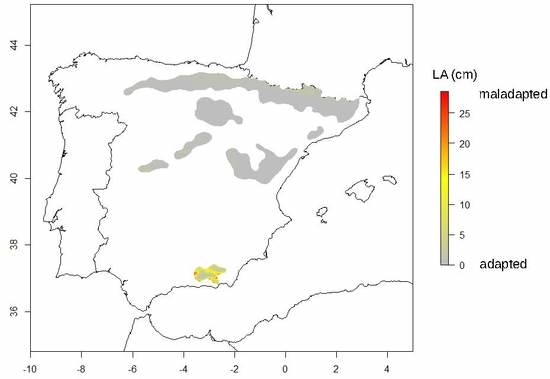