Mutual Influences of Urban Microclimate and Urban Trees: An Investigation of Phenology and Cooling Capacity
Next Article in Special Issue

Research Highlights: This research highlights the importance of environmental gradients in shaping tree growth responses to global change drivers and the difficulty of attributing impacts to a single directional driver. Background and Objectives: Temperature increases associated with climate change might strongly influence tree growth and forest productivity in temperate forest species. However, the direction and intensity of these effects at the dry edge of species range are still unclear, particularly given the interaction between local factors and other global change drivers such as land use change, atmospheric CO2 increase and nitrogen deposition. While recent studies suggest that tree growth in cool temperate forests has accelerated during the last decades of the 20th century, other studies suggest a prevalence of declining growth, especially in dry-edge populations. Materials and Methods: Using historical forest inventories, we analyzed last century tree growth trends (1930–2010) along an elevation gradient (1350–1900 meters above sea level (m a.s.l.)) in a dry edge scots pine (Pinus sylvestris L.) forest in Central Iberian Peninsula. Growth was estimated as decadal volume increments in harvested trees of different size classes from 1930 to 2010 (1930–1940, 1939–1949, 1949–1959, 1959–1968, 1989–1999, 2000–2010). Results: Our results showed opposite growth trends over time depending on elevation. While tree growth has accelerated in the low end of the altitudinal gradient, tree growth slowed down at higher elevations (1624–1895 m a.s.l.). Moreover, the magnitude of growth reduction along the altitudinal gradient increased with tree age. Conclusions: Throughout the last 80 years, growth trends in a rear-edge Pinus. sylvestris forest has shown divergent patterns along an altitudinal gradient. Specifically, environmental conditions or other factors, may have become more adverse for growth at high altitudes and have improved at low altitudes. This suggests that local factors such as topography can modulate the impact of climate change on forest ecosystems. View Full-Text
Keywords: altitude; global change; high mountain; Mediterranean; Scots pine altitude; global change; high mountain; Mediterranean; Scots pine
►▼ Show Figures 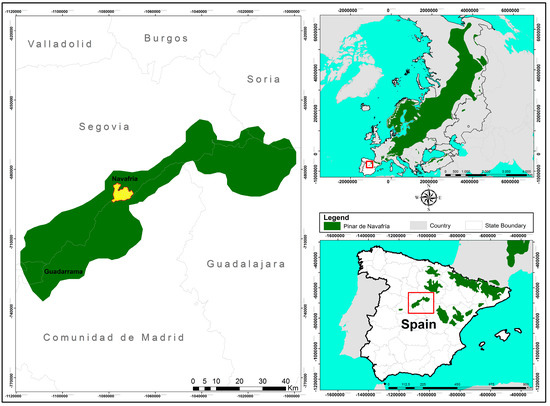