Characteristics and Expression Analysis of FmTCP15 under Abiotic Stresses and Hormones and Interact with DELLA Protein in Fraxinus mandshurica Rupr.
Previous Article in Journal

Aleppo pine (Pinus halepensis Mill.) is widespread in most countries of the Mediterranean area. In Greece, Aleppo pine forms natural stands of high economic and ecological importance. Understanding the species’ ecophysiological traits is important in our efforts to predict its responses to ongoing climate variability and change. Therefore, the aim of this study was to assess the seasonal dynamic in Aleppo pine gas exchange and water balance on the leaf and canopy levels in response to the intra-annual variability in the abiotic environment. Specifically, we assessed needle gas exchange, water potential and δ13C ratio, as well as tree sap flow and canopy conductance in adult trees of a mature near-coastal semi-arid Aleppo pine ecosystem, over two consecutive years differing in climatic conditions, the latter being less xerothermic. Maximum photosynthesis (Amax), stomatal conductance (gs), sap flow per unit leaf area (Ql), and canopy conductance (Gs) peaked in early spring, before the start of the summer season. During summer drought, the investigated parameters were negatively affected by the increasing potential evapotranspiration (PET) rate and vapor pressure deficit (VPD). Aleppo pine displayed a water-saving, drought avoidance (isohydric) strategy via stomatal control in response to drought. The species benefited from periods of high available soil water, during the autumn and winter months, when other environmental factors were not limiting. Then, on the leaf level, air temperature had a significant effect on Amax, while on the canopy level, VPD and net radiation affected Ql. Our study demonstrates the plasticity of adult Aleppo pine in this forest ecosystem in response to the concurrent environmental conditions. These findings are important in our efforts to predict and forecast responses of the species to projected climate variability and change in the region. View Full-Text
Keywords: Aleppo pine; Greece; photosynthesis; water potential; δ13C; sap flow; canopy conductance; climate Aleppo pine; Greece; photosynthesis; water potential; δ13C; sap flow; canopy conductance; climate
►▼ Show Figures 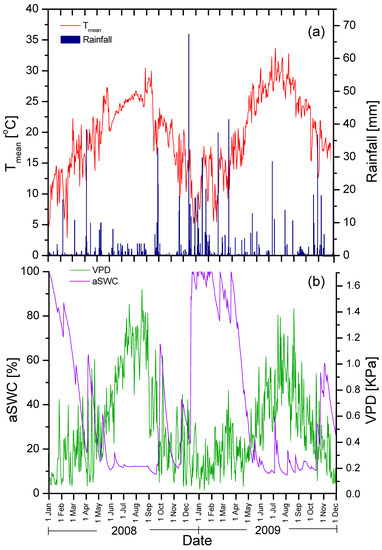