The proposed mushroom-picking algorithm is a metaheuristic constructed from the following components:
The initial population of feasible solutions is generated randomly and stored in the common memory. MPA works in cycles. A cycle involves randomly partitioning the solutions from the common memory into several subpopulations of equal size. Each subpopulation is served by a group of the solution-improving agents. Groups are replicated to take care of each subpopulation. Each agent within a group reads the required number of solutions from the subpopulation and tries to improve them. If successful, a worse solution in the population is replaced by the improved one. The required number of solutions depends on the construction of the particular agent. A single argument agent requires a single solution. Double argument agents require two solutions, etc. All groups of agents work in parallel threads. A sequence of improvement attempts within a group is random. After the time span set for the cycle has elapsed the cycle is closed and all current solutions from subpopulations are returned to the common memory. Solutions in the common memory are then shuffled and the next cycle begins. The final stopping criterion is defined as no improvement of the best result (fitness) after the given number of cycles were run. Defining the stopping criterion aims at finding a balance between the quality of the final solution and the overall computation time.
The parallelization of the solutions improvement process is carried out using the Apache Spark, a general-purpose framework for parallel computing [40].
The general scheme of the MPA is shown in pseudo-code as Algorithm 1.
ApplyOptimizations attempts to improve current results in each subpopulation of solutions by running the solution-improving agents. The process is carried out for the time span of a given length, called searchTime set by the user. During this period, applyOptimizations draws at random an optimizing agent from the available set of agents and applies it to a random solution from the subpopulation. The number of solutions drawn from the respective subpopulation and temporarily allocated to an agent must be equal to the number of arguments that the agent requires to be able to act. If the agent finds a solution that is different and better than originally obtained as its arguments, applyOptimizations replaces some worse solution with the improved one.
A single solution in the MPA is represented by the ordered list of numbers. The length of the list depends on the problem at hand, but for instances of a particular problem, the length of such a list is constant. For example, for a TSP problem with 6 nodes the solution could be represented by the following: List (2, 1, 4, 3, 5).
The following solution-improving agents were defined and implemented:
Algorithm 2 shows how the crossover operation is implemented as Scala function cross. We also show how the list representing the example solution changes as the result of crossing it with another solution.
The MPA outlined above may be used for solving various combinatorial optimization problems in which a solution can be represented as the list of numbers. Among such problems there are the traveling salesman problem (TSP) and job shop scheduling problem (JSSP).

The traveling salesman problem (TSP) is a well-known NP-hard optimization problem. We consider the Euclidean planar traveling salesman problem, a particular case of TSP. For given n cities in the plane and Euclidean distances between these cities, we consider a tour as a closed path visiting each city exactly once. The objective is to find the shortest tour. A solution is represented as the list of indexes of the cities on the path–in the order of visiting them.

Job shop scheduling (JSSP) is another well-known NP-hard optimization problem. There is a set of jobs (J1, …, Jn) and a set of machines (m1, …, mm). Each job j consists of a list of operations that have to be processed in a given order. Each operation within a job must be processed on a specific machine, only after all preceding operations of this job were completed.
The makespan is the total length of a schedule, i.e., the total time needed to process all operations of all jobs. The objective is to find a schedule that minimizes the makespan.
A solution is represented as sequence of jobs of the length n × m. There are m occurrences of each job in such sequence. When examining a sequence from the left to the right, the i–th occurrence of the job j refers to the i–th operation of this job.

2.4. Implementation of the MPA for TSP and JSSP

Although actions of agents are identical for both problems, the implementation is different. The main difference is the manner fitness is calculated. In the TSP, when moving a node to a different position on the list of nodes representing a solution or when reversing the order of nodes on a subpath of the list, the length of the resulting path may be easily adjusted and calculated. Similar, simple, calculations for JSSP do not work. After each change of positions on the list representing a solution, a new value of fitness has to be calculated from the whole list.
Algorithm 3 presents how the function reversing a subpath was implemented within the TSP solution. The algorithm contains part of the definition of the class for TSP solution with the method reverse. The agent randomReverse calls it for randomly chosen from and len. Algorithm 4 presents similar function for JSSP.
The source files of the implementation of MPA for TSP is available at [41].

To validate the proposed approach, we carried out several computational experiments. Experiments were based on publicly available benchmark datasets for TSP [42] and JSSP [43], containing instances with known optimal solutions (minimum length of path in the case of TSP or minimum makespan for JSSP). Experiments, besides evaluating the performance of the MPA, aimed at finding the best composition of the self-organized agents, each representing a simple, solution-improving, procedure. Performance of agents was evaluated in terms of the two measures—mean error calculated as the deviation from the optimum or best known solution and computation time. Another analysis covered mean computation time performance versus the number of threads used. This experiment aimed at identifying how increasing the number of threads executed in parallel affects the overall computation time. Finally, we have compared the performance of our approach with the performance of several state-of-the-art algorithms known from the literature.
In the experiments the following settings were used: number of repetitions for calculation of mean values—30 or more, the number of solutions processed in a single thread—2 for TSP and 4 for JSSP. The total number of solutions equals number of threads × number of solutions in a single thread. The number of threads is reported for each experiment.
The initial solutions were generated at random for JSSP, as the number of operations is equal for each job, expression (1) may be used (written in Scala).
Random.shuffle( List.range( 0, machinesNo).flatMap( m => List.range( 0, jobsNo)))
In the case of TSP, the next node on the path was chosen as the nearest of the possible nodes with the probability 0.8, second nearest with the probability 0.1, random node of 5 nearest with probability 0.1.
The agent crossover is always called twice less often than any other agent.
All experiments were run on Spark cluster with 8 nodes with 32 VCPU at the Academic Computer Center in Gdansk.

3.3. MPA Performance versus other Approaches

Further experiments aimed at comparing the performance of the MPA with performance of other, state-of-the-art algorithms. Table 5 presents results obtained for instances of the TSP for different values of the searchTime. Calculations were carried out using the set of agents consisting of bestMove, randomReverse and crossover. Computations were carried out using 175 threads. The stopping criterion was defined as no improvement in the best fitness for 5 rounds. In Table 6 the results are compared with some other results known from the literature,
A comparison with [27] is especially interesting as in the CII very similar one-argument functions were applied to a single initial solution. CII is much faster (time is expressed in milliseconds in this case) than MPA. In return, our method outperforms CII in terms of the computation errors.
Table 7 presents results obtained for instances of the JSSP. In this case the set of agents consisting of randomMove, randomReverse and crossover were used. searchTime of one round and stopping criterion was defined as 2 deciseconds and 2 rounds with no improvement in the best solution for la01 to la14, and 5 s and 5 rounds with no improvement for la15 to la49. In Table 8 the MPA results are compared with some other recently published results. Errors for [33] and [32] were computed on the base of results given in the respective papers. In [32] only mean errors were reported with no information on the computation time.

The study proposes an approach for solving the TSP and JSSP instances in which a swarm of agents tries to improve solutions from the population of solutions. The approach named mushroom-picking algorithm is a population-based metaheuristic implemented in the parallel computation environment. The proposed algorithm offered good or very good performance-producing solutions that were optimal or close to optimal, within in a reasonable time.
The performance of the MPA is encouraging from the point of view of the future research. One possible direction is extending the spectrum of a simple result improving agents. Some restrictions on the process of selecting results for improvement may result in decreasing computation time by eliminating unproductive attempts. It is also expected to implement the approach using different environments for parallel computing.

The authors declare no conflicts of interest. The funders had no role in the design of the study; in the collection analyses or interpretation of data; in the writing of the manuscript or in the decision to publish the results. 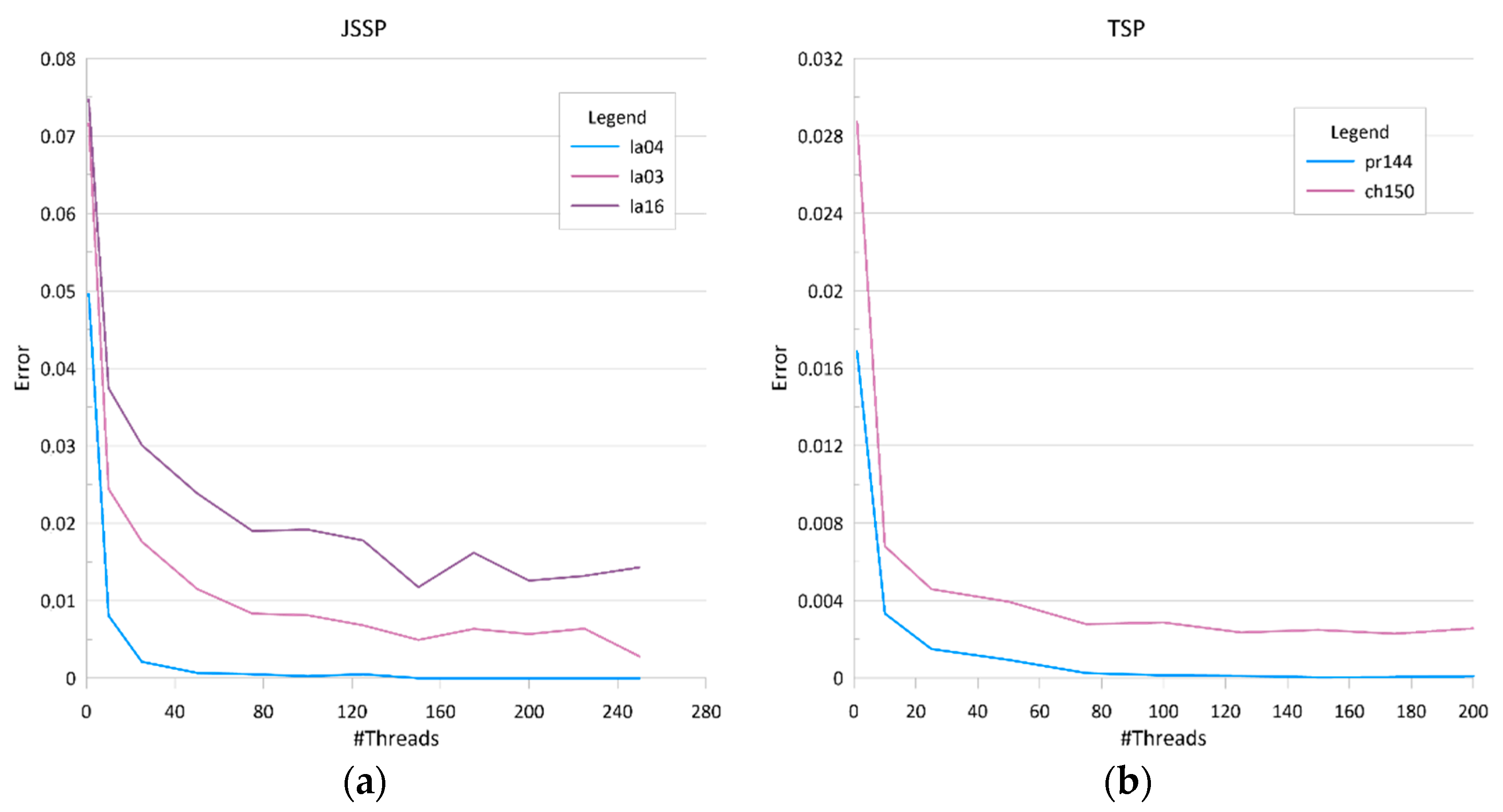