Understanding the adsorption properties of DNA bases on metal surfaces is fundamental for the rational control of surface functionalization leading to the realisation of biocompatible devices for biosensing applications, such as monitoring of particular parameters within bio-organic environments and drug delivery. In this study, the effects of deposition rate and substrate temperature on the adsorption behavior of adenine on Cu(110) surfaces have been investigated using scanning tunneling microscopy (STM) and density functional theory (DFT) modeling, with a focus on the characterization of the morphology of the adsorbed layers. STM results revealed the formation of one-dimensional linear chains and ladder-like chains parallel to the [110] direction, when dosing at a low deposition rate at room temperature, followed by annealing to 490 K. Two mirror related, well-ordered chiral domains oriented at ±55° with respect to the [110] direction are formed upon deposition on a substrate kept at 490 K. The molecular structures observed via STM are rationalized and qualitatively described on the basis of the DFT modeling. The observation of a variety of ad-layer structures influenced by deposition rate and substrate temperature indicates that dynamic processes and hydrogen bonding play an important role in the self-assembly of adenine on the Cu(110) surface. View Full-Text
Keywords: adenine; STM; DFT; Cu(110); hydrogen bonding adenine; STM; DFT; Cu(110); hydrogen bonding
►▼ Show Figures 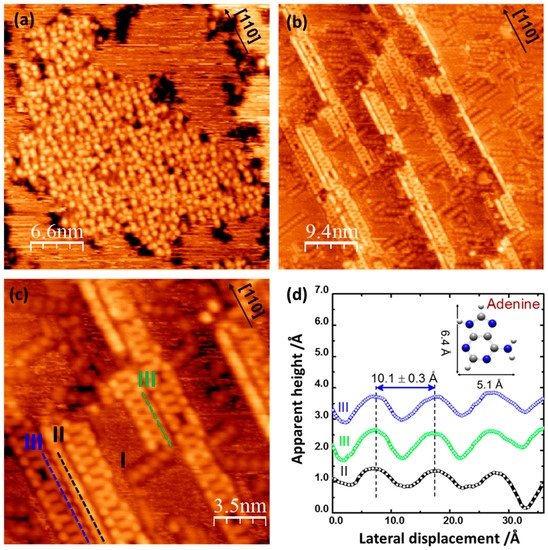