Brillouin and Raman Micro-Spectroscopy: A Tool for Micro-Mechanical and Structural Characterization of Cortical and Trabecular Bone Tissues
Next Article in Special Issue

:
Abrasions and pressure ulcers on the oral mucosa are most often caused by excessive pressure or incorrect fitting of the denture. The use of soft relining materials can eliminate pain sensations and improve patient comfort. The main functional feature of soft elastomeric materials is the ability to discharge loads from the tissues of the mucosa. (1) Background: The aim of the work was a comparative laboratory study of ten materials used for the soft lining of acrylic dentures. (2) Methods: There were materials based on acrylates (Vertex Soft, Villacryl Soft, Flexacryl Soft) and silicones (Sofreliner Tough Medium, Sofreliner Tough Medium, Ufi Gel SC, GC Reline Soft, Elite Soft Relining, Molloplast). Laboratory tests include the analysis of the tensile bond strength between the relining material and the acrylic plate of the prosthesis. The tests were conducted taking into account 90-day term aging in the distilled water environment based on the methodology presented in the European Standard ISO 10139-2. (3) Results: After three months of observation, the highest strength of the joint was characterized by Flexacryl Soft acrylic, for which the average value was 2.5 MPa. The lowest average value of 0.89 MPa was recorded for the GC Reline Soft silicone material. Over time, an increase in the value of the strength of the combination of acrylic materials and a decrease in these values in the case of silicone materials was observed. (4) Conclusion: Each of the tested silicone materials showed all three types of damage, from adhesive to mixed to cohesive. All acrylic-based materials showed an adhesive type of failure. Time did not affect the type of destruction.
Keywords:
dentures; denture lining; long-term lining; soft lining materials; silicone-based lining; acrylic-based lining; gerodontology; oral health

The study of the tensile bond strength of the relining materials with the acrylic denture base material showed that the bond strength values increased with time for Villacryl Soft, decreased for Vertex Soft and Flexacryl Soft, and were almost stable in the case of silicone materials, excluding GC Reline Soft and Mollopast B (decrease of σB). The bond strength and its changes are therefore dependent on the specific material used. It cannot be assumed in advance how a material belonging to a material group will behave over time, although there is a good chance that the silicone will be much more stable in the simulated period. Each of the tested silicone materials showed all three types of failure, from adhesive, through mixed, to cohesive. All acrylic-based materials showed adhesive failure. Time did not affect the type of failure, excluding Sofreliner Tough Medium and Mollosil Plus.

An ethical approval of the Bioethical Commission of the Medical University of Silesia in Katowice was not required.

The data presented in this study are available from the corresponding authors. 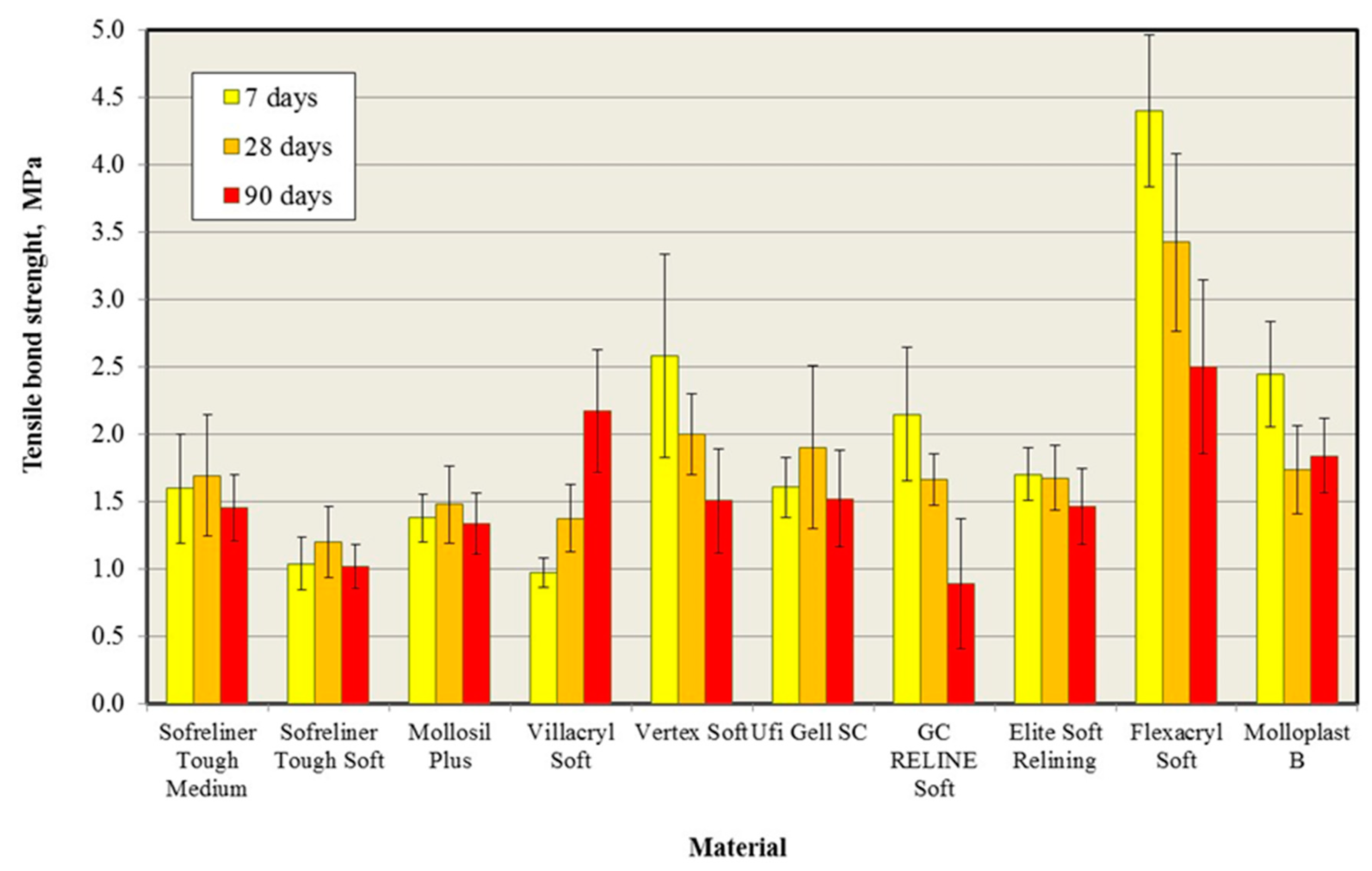 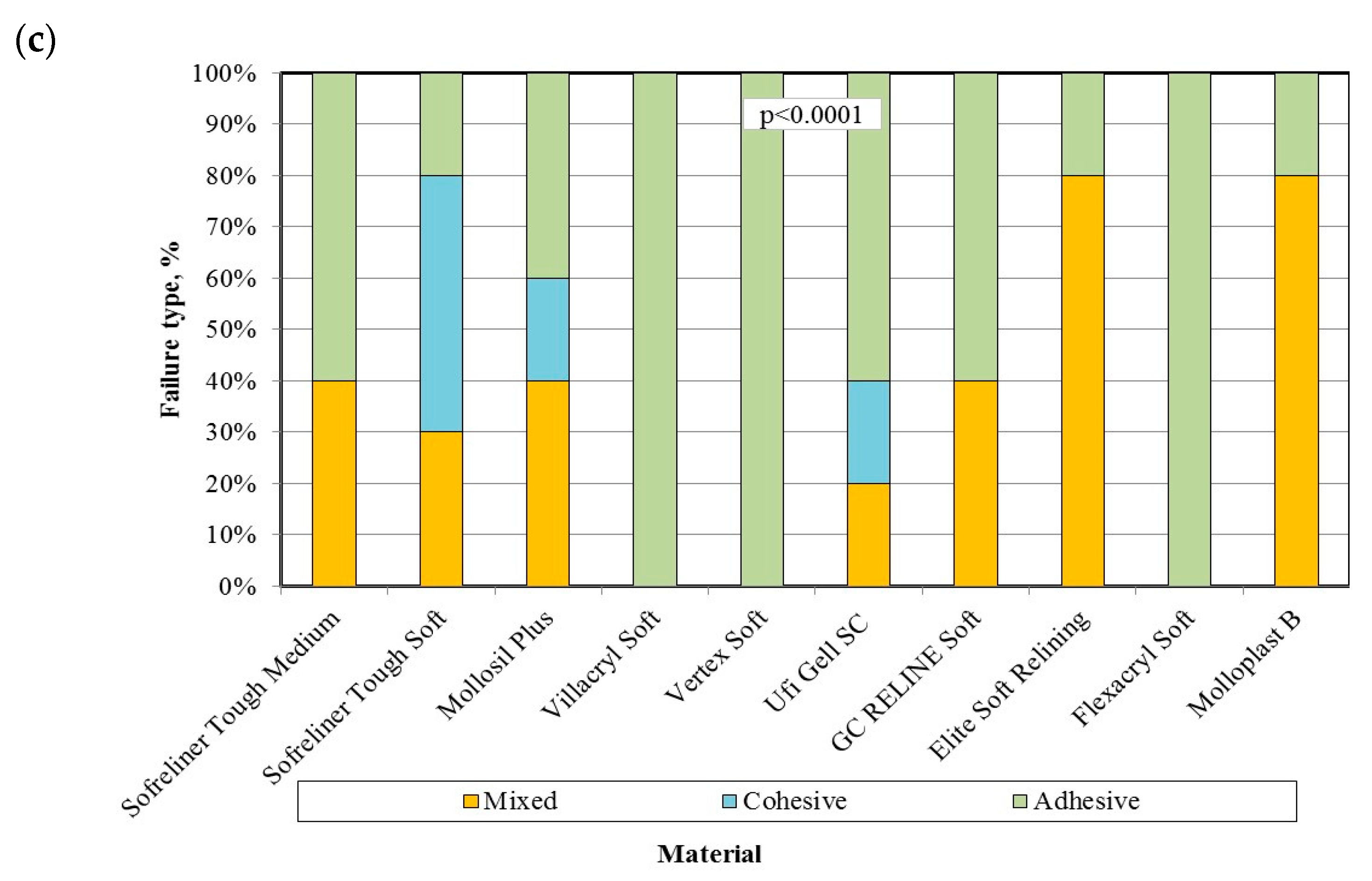