Effect of Rough Surface Platforms on the Mucosal Attachment and the Marginal Bone Loss of Implants: A Dog Study

The preservation of peri-implant tissues is an important factor for implant success. This study aimed to assess the influence of the surface features of a butt-joint platform on soft-tissue attachment and bone resorption after immediate or delayed implant placement. All premolars and first molars of eight Beagle dogs were extracted on one mandible side. Twelve-weeks later, the same surgery was developed on the other side. Five implants with different platform surface configurations were randomly inserted into the post-extracted-sockets. On the healed side, the same five different implants were randomly placed. Implants were inserted 1 mm subcrestal to the buccal bony plate and were connected to abutments. The primary outcome variables were the supracrestal soft tissue (SST) adaptation and the bone resorption related to the implant shoulder. The SST height was significantly larger in immediate implants (IC95% 3.9–4.9 mm) compared to delayed implants (IC95% 3.1–3.5 mm). Marginal bone loss tended to be higher in immediate implants (IC95% 0.4–0.9 mm) than in delayed implants (IC95% 0.3–0.8 mm). Linear-regression analysis suggested that the SST height was significantly affected by the configuration of the platform (0.3–1.9 mm). Roughened surface platforms resulted in higher SST height when compared to machined surface platforms. Marginal bone loss was less pronounced in roughened designs.
Keywords: implant platform; mucosal attachment; marginal bone loss implant platform; mucosal attachment; marginal bone loss

The biological phases of the healing dynamics of both hard and soft tissues after dental implant placement have been reported in animal experiments [1,2] and human studies [3]. Such dynamics have also been described for implants immediately placed into extraction sockets [4,5,6].
Marginal bone resorption occurs when an implant is inserted both in healed sites [7,8] and also in extraction sockets [4,7]. A systematic review reported that marginal bone resorption takes place irrespectively on the implant neck configuration [9]. Nevertheless, roughness and micro-threads at the implant neck contribute to marginal bone preservation [10,11,12,13,14]. Few studies have compared the effect of implant surface configurations and geometries on the peri-implant healing process at implants placed immediately into extraction sockets [15,16]. It seems that the presence of marginal micro-threads or grooves reduces marginal bone resorption and soft tissue recession. To date, most research regarding the clinical management of immediate implants is mainly focused on hard tissue integration and the effect of different implant designs or surgical approaches on clinical esthetic outcomes. However, there is insufficient evidence whether or not different implant designs and surface configurations enable the formation of an adequate soft-tissue seal at implants immediately placed into extraction sockets and compared to implants placed into fully-healed alveolar ridges.
The objective of this experimental study was; therefore, to assess the influence of the surface roughness platform of butt-joint implants placed immediately into extraction sockets, with regards to the dimensions of the supracrestal peri-implant soft tissue seal and the preservation of marginal alveolar bone 12 weeks after implant placement.

The experimental protocol was submitted and approved by the Ethical Committee of the University of Santiago of Compostela in Spain (Ref: 01/16-LU/001). The study was reported according to the ARRIVE guidelines.

The guidelines for animal care adopted in Spain were strictly followed. Eight 3-year-old male Beagle dogs supplied by Isoquimen SL (Sant Feliú de Codines, Barcelona, Spain; RN° B9900039) were included in the study. To minimize the number of dogs for ethical reasons (Three R requirements), but to maintain enough power of analysis, a split-mouth design was developed. The dogs were the unit of analysis. The sample size was estimated to be eight dogs for detecting differences in the supracrestal soft tissue height of 2 mm with a power of 80% and a probability of alpha = 0.05.

The randomization for the side of the mandible and the allocation of five different types of implants were performed by one of the authors that did not participate in the surgeries (AF). Sealed envelopes were used and opened at the time of surgery. The surgeon (EV) was informed about the selection of the hemimandible for implant placement before the first session of tooth extraction.
The histological slides did not report indications about treatment allocation, nor did the examiner (JM) receive such information.

The animals were pre-sedated with an intramuscular injection using a combination of 25 μg/kg medetomidine (Doctor Esteve, Barcelona, Spain) and 0.5 mg/kg morphine (Morfina Braun 2%, Braun, Barcelona, Spain). Then, general anesthesia was induced using 5 mg/kg/i.v. of propofol (Vetofol, Esteve, Barcelona, Spain) by intravenous infusion, followed by laryngeal intubation and the inhalation of a mix of 2.5%–4% isoflurane/sevoflurane and 30% oxygen from the ventilation tube.
During the anesthesia, a veterinarian continuously recorded the electrocardiogram, arterial pressure, pulse oximetry, and capnography with non-invasive methods. Besides, submucous injections of articaine hydrochloride (Ultracain®, Normon, Spain) were infiltrated locally for bleeding control. After the intra-sulcular incisions, full-thickness mucoperiosteal flaps were made, and all mandibular premolars and first molars were extracted at one randomly selected hemi-arcade. The flaps were closed with single interrupted 4-0 vicryl resorbable sutures.
Twelve weeks after surgery, the same procedure was performed on the contralateral side, and five implants were installed into the extraction sockets in all premolars (P1–P4) and molar (M1) sites. Straight multi-unit screw-retained abutments were fixed with a closing screw onto all implants. Each multi-unit abutment was by the same manufacturer as its corresponding implant (Institute Straumann AG, Basel, Switzerland and Galimplant SLU, Sarria, Lugo, Spain).
In the healed contralateral ridge, five delayed implants were inserted in the healed sites of P1–P4 and M1. All implants received multi-unit abutments fixed with the closing screw. The implants were placed 1 mm subcrestal to the buccal plate level on both sides. Single 4-0 vicryl resorbable sutures were used to close the flaps, allowing non-submerged healing.

In each hemiarcade, five different types of implants of two different manufacturers were assessed (Figure 1):
The characteristics of each implant group are summarized in Table 1.
The IPX implant surface received a surface conditioning treatment consisting of a mixed method (mechanical and chemical; The Nanoblast Plus® technique) for improving implant surface topography through two consecutive processes: aluminum oxide spraying and triple acid etching. This method was patented by the manufacturer Galimplant SLU (Sarria, Lugo, Spain). The SLA (Sandblast, Large-Grit, Acid-Etching) method is a method patented by Straumann (Straumann AG, Basel, Switzerland) that induces surface erosion by applying a strong acid onto the blasted surface. This treatment combines blasting with large-grit sand particles and acid etching sequentially to obtain macro roughness and micro pits. The roughness characteristics of each surface can be observed with a magnification of 1000× in Figure 2.
Within each experimental group, half of the implants were placed in the healed ridge, and the counterparts were located into fresh extraction sockets. The IPX-Control implants were always inserted at the most distal site (M1), but the rest of the implants were randomly assigned using closed envelopes to distinct premolar sites (P1–P4).

The protocol for postoperative care included a daily dose of cefovecin sodium (8 mg/kg/ Convenia®, Zoetis, Spain) and morphine (0.5 mg/Kg/day) injected intramuscularly during five days, as well as meloxicam (0.2 mg/Kg/p.o.), dispensed with meals. The sutures were removed one week post-surgery. Plaque control was performed by brushing the dogs’ teeth three times per week, with a 2% chlorhexidine gel.

Twelve weeks after implant placement, all animals were euthanized by an overdose of pentobarbital (40–60 mg/Kg/IV), and mandibular biopsies were obtained for histological processing.

The tissue blocks containing the implants and surrounding tissues were prepared for non-decalcified sectioning, where blocks were fixed in buffered 10% formaldehyde for at least four days at 4 °C. Afterward, the specimens were dehydrated in a series of ascending concentrations of ethanol solutions for 72 h at each stage (80%, 96%, 100%), and finally embedded in polymethylmethacrylate resin during three weeks at room temperature (until the resin was hard to the touch). Final curing was achieved by placing the samples into a 37 °C oven for 72 h. The blocks were then sectioned with a precision cut-off Exakt machine (Exakt Aparatebau GMBH, Norderstedt, Germany) and polished using silicon carbide grit papers in a descending size-grain protocol (from #600 to #4000 grit papers). Using this approach, 2 to 4 slices of 100–200 μm-thick sections were obtained buccolingually for the implants and subsequently analyzed. The specimens were stained using the Levai Laczko technique [17] (Figure 3 and Figure 4).
Photomicrographs were obtained using a Zeiss-Stemi 2000-C photomicroscope (Carl Zeiss Microimaging, Thornwood, NY, USA) at a magnification of 4×. An image analysis program (Image Pro Premier, Media Cybernetics, USA; CellSens, Olympus, Japan) was used to measure the peri-implant tissue healing based on the following landmarks: Implant shoulder (IS); the most coronal point of contact between bone and implant (B); the margin of the peri-implant mucosa (PM); and the apical border of the junctional epithelium (aJE).
These topographic references (Figure 5) were used to measure the following linear parameters (mm): The supracrestal soft tissue height (the distance between PM and B); the epithelial attachment length (the distance between PM and aJE); the connective adaptation heights (the distance between aJE and B); and the marginal bone loss (the distance between IS and B). In addition, the percentage of bone-to-implant contact (BIC) was measured in both the buccal and lingual sides of the implants.

Mean values and standard deviations (SD) were calculated for each outcome variable. Differences between the immediate and delayed implant sites were analyzed using Student’s t-test for paired observations. Differences between the distinct groups of implants were analyzed by ANOVA with post hoc Bonferroni corrections. Spearman correlation coefficients were used to evaluate the linear relationship between quantitative and ordinal variables. Finally, backward stepwise linear regression models were calculated for predicting both supracrestal soft tissue adaptation length and the average marginal bone loss. The level of significance was established at 0.05. All analyses were carried out with SPSS 18.0 (SPSS Inc., Chicago, IL, USA) software. Data were corrected with SUDAAN 11 Statistical Software (RTI International, SC, USA) for the autocorrelation of all variables derived from this split-mouth design study.

Within the limitations of the present study, it may be concluded that the effect of different topographical platform designs on marginal bone levels and soft-tissue height is inconclusive. Rough platform modifications may be beneficial to better preserve the marginal bone level in comparison to non-modified turned platforms. Regarding the timing for placing the implant, it seems that better results were obtained with delayed implants than with immediate implants. 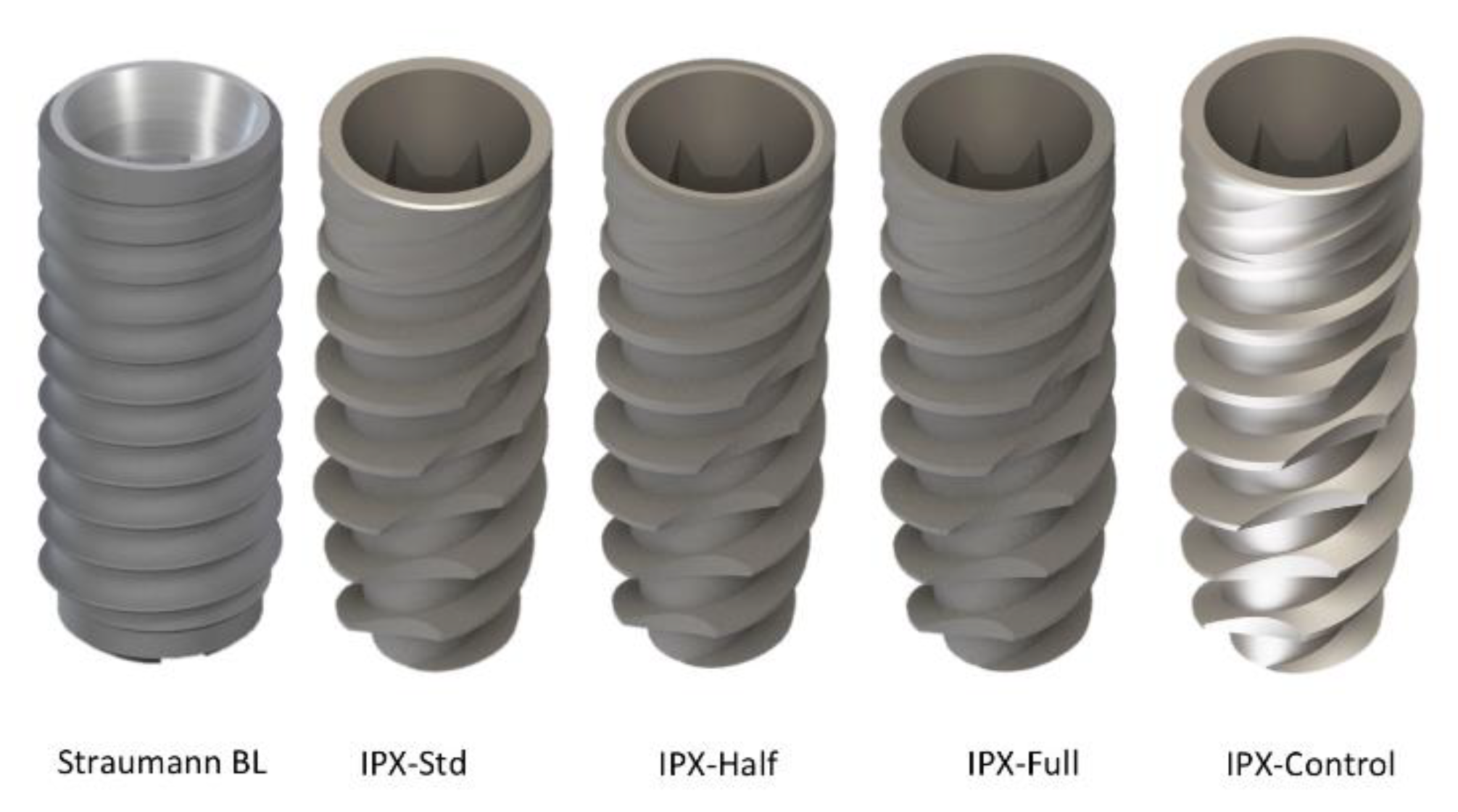 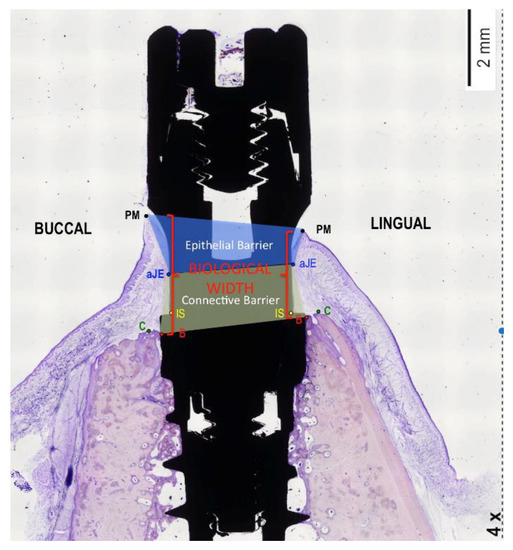