Impact of ZnO Addition on Er3+ Near-Infrared Emission, the Formation of Ag Nanoparticles, and the Crystallization of Sodium Fluorophosphate Glass

The impact of the progressive addition of ZnO up to 5 mol% on the thermal, structural, and optical properties of Er3+-doped phosphate glasses within the system NaPO3-NaF-ZnO-Ag2O is discussed. The glass network was found to depolymerize upon the addition of ZnO. This promotes a slight increase in the intensity of the emission at 1.5 µm as well as enhances the silver ions clustering ability under the heat treating. The Ag-nanoparticles formed after moderate heat-treatment can further enhance the emission at 1.5 µm, whereas an excessive amount of the clusters leads to the opposite effect. The addition of ZnO helps to slightly increase the glass ability of the system. The crystallization behavior study revealed that surface crystallization is observed for all the glasses. It is found that even a small ZnO addition changes the crystalline phases formed after devitrification. Moreover, the addition of ZnO decreases the crystallization tendency of the glass.
Keywords: glass; glass-ceramic; silver nanoparticles; erbium; luminescence; crystallization glass; glass-ceramic; silver nanoparticles; erbium; luminescence; crystallization

The addition of rare-earth elements (REE) into glasses with various compositions has been intensively studied, as these active glasses can find applications in telecommunications, light detection and ranging, solar panels, and bio-imaging, just to cite a few [1,2,3,4]. Of particular attention are the Er3+ due to the 4I13/2 →4I15/2 transition, which corresponds to an emission band at around 1530 nm. Er3+-doped phosphate glasses have been intensively investigated for many years, as phosphate glasses possess lower glass transition (Tg), melting temperatures, and also good UV transparency compared to most of the silicate glasses [5]. Additionally, phosphate glasses have low dispersion, high possible rare-earth ions doping concentration, large refractive indices, and emission cross-section [6]. Therefore, Er3+-doped phosphate glasses are promising for amplifiers, wavelength division multiplexing, and optical communication systems operating at 1.5 μm [7,8,9].
Glasses are known to be a good medium for growing metallic nanoparticles (NPs) [10]. Different methods can be used to grow the metallic NPs such as sol–gel [11], direct metal-ion implantation [12], light-ion irradiation in ion-exchanged glasses [13], and annealing in hydrogen atmosphere of ion-exchanged glasses [14], just to cite a few. Most of these methods consist of two-steps: (i) the inclusion of metal ions into the glass matrix and (ii) the formation of clusters upon a post-treatment. Due to its simplicity and low cost, the thermal heat treatment method has been intensively used to form metal NPs in glass, especially when the glass is doped with rare-earth ions [15,16,17]. Rare-earth-doped glasses containing metallic NPs are attractive because the presence of NPs can enhance the luminescence [18] and the nonlinear properties [19] which are important for optical device applications. In particular, the formation of Ag nanoparticles can improve the spectroscopic properties of Er3+-doped glass due to the strong local electric field induced by surface plasmon resonance (SPR) of Ag NPs and also by energy transfer from the surface of silver NPs to Er3+ ions [20].
The other materials which can exhibit enhanced optical properties (such as absorption and emission cross-section and energy transfer rates) compared to glass are glass-ceramics (GCs). The enhancement of the spectroscopic properties can be achieved if the rare-earth ions are located around the crystalline phase [21,22]. Therefore, glass-ceramics have been intensively studied as they combine the merits of crystals and glasses [23,24,25]. As for the formation of metallic NPs, glass-ceramics are usually obtained by heat-treating a glass above its glass transition temperature.
Very few studies about the fabrication of Er3+-doped glass-ceramics which also contain Ag NPs have been reported. The purpose of this study was to investigate the impact of the glass composition on various glass properties, especially the spectroscopic properties, on the formation of Ag nanoparticles to enhance the emission centered at 1.5 µm and finally on the glass crystallization tendency in order to prepare new glass-ceramics.
In this work, new Er3+-doped phosphate glasses containing Ag2O were prepared and heat treated in order to precipitate Ag NPs and obtain glass-ceramics. We discuss first the impact of the glass composition on the structure and the spectroscopic properties of the glasses and then the impact of the glass structure on the Ag nanoparticles formation. Finally, we present results related to the preparation and characterization of glass-ceramics.

Glasses with the composition (97 − x) × (0.9NaPO3-0.1NaF)-xZnO-2.5Ag2O-0.5Er2O3 with x = 0, 1.25, 2.5, and 5 were prepared using standard melting process in air. The raw materials were (NaPO3)6 (Alfa Aesar, Tewksbury, MA, USA, 99.99%), NaF (Sigma Aldrich, Saint Louis, MO, USA, ≥99.0%), ZnO (Sigma Aldrich, Saint Louis, MO, USA, ≥99.5%), Ag2SO4 (Sigma Aldrich, Saint Louis, MO, USA, 99.999%), and Er2O3 (MV Laboratories Inc, Frenchtown, NJ, USA, 99.5%). The 15 g batches were melted in quartz crucibles for 5 min at temperatures ranging between 800 °C and 875 °C, depending on the glass composition. After quenching, the glasses were annealed in a furnace at 200 °C for 6 h to release the stress from the quench and cooled down slowly by switching off the heating elements (cooling rate about 1 K/min).
The Archimedes’ method was used to measure the densities of the glasses with an accuracy at ±0.02 g/cm3. Ethanol was used as the immersion liquid.
The thermal properties were measured using a STA 449 F1 instrument (NETZSCH, Selb, Germany). Powdered glasses were used for the experiment, and the heating rate was 10 °C/min. The Tg was determined as the inflection point of the endotherm which is the first derivative of the differential thermal analysis (DTA) curve. Tx and Tp were taken as the onset and at the maximum point of the first exothermic peak, respectively. The accuracy of the measurement is ±3 °C.
The Raman spectra were measured using an inVia™ Qontor® confocal Raman microscope (Renishaw, Gloucestershire, UK) using a 405 nm laser. The measurements were done using polished glass samples. Additionally, the IR spectra were collected with a PerkinElmer Spectrum One FTIR in attenuated total reflectance (ATR) mode on powdered glasses. The resolution used was 2 cm−1 and the spectra were obtained from the accumulation of 8 scans.
The absorption spectra were measured using a UV-VIS-NIR spectrophotometer (UV-3600 Plus, Shimadzu, Kyoto, Japan) with a resolution of 0.2 nm. The absorption coefficients were used to estimate the absorption cross-section σabs (λ) using Equation (1): where log(I0/I) is the absorbance, L is the thickness of the sample (in cm), and N is the rare-earth ion concentration (ions/cm3). The Er3+ ions concentration was calculated from the measured densities of the glasses.
The emission spectra of the glasses were measured at room temperature with a 0.5 nm interval using a Jobin Yvon iHR320 spectrometer (HORIBA Jobin Yvon, Edison, NJ, USA) with a Hamamatsu P4631-02 detector (Hamamatsu Photonics K.K., Hamamatsu, Japan) and a FEL1300 long-pass filter (Thorlabs Inc., Newton, NJ, USA). The excitation was done by a monochromatic 976 nm single-mode fiber pigtailed laser diode (CM962UF76P-10R, Oclaro Inc., San Jose, CA, USA). The fluorescence lifetime of the Er3+:4I13/2 →4I15/2 transition was obtained by exciting the samples with a fiber pigtailed laser diode operating at a wavelength of 976 nm, recording the signal using a digital oscilloscope (Tektronix TDS350, Tektronic Inc., Beaverton, OR, USA). The detector used for this measurement was an amplified InGaAs detector (PDA10CS-EC, Thorlabs Inc., Newton, NJ, USA).
Due to the nonexponential decay law observed for all the samples, two types of decay law analysis were done. The average lifetime (τavg, s) of the decay was calculated numerically using Equation (2):
It is the simplest way to characterize a nonexponential decay without any assumption. The average lifetime allows us to directly compare the results between different samples, but it is hardly describing a sophisticated function of the observed decay law if it differs from exponential.
To shed more light on the processes lying behind the nonexponential decay behavior, the luminescence decay curves were fitted using a stretched exponent function, which is described by Equation (3): where τ (s) is effective time and β (dimensionless) is a constant ranging from 0 to 1. The stretched exponential behavior can originate from different microscopic mechanisms, in particular, for the glasses it can be an evidence of a disorder in the optical center environment [26,27]. In this case, the β parameter can be considered as a mere of this disorder: β = 1 corresponds to a single-exponent decay and no variation of the site, whereas a decrease in β indicates higher dispersion in the local environment of the optical center.
The Panalytical EMPYREAN multipurpose X-Ray Diffractometer (PANalytical, Almelo, The Netherlands) with a nickel-filtered copper Kα radiation was used to measure the XRD pattern of the glasses. The samples were crushed into fine powder and spread over a “zero-background holder” Si-plate. The spectra were obtained using the Bragg–Brentano geometry and by rotating the sample holder around the Phi-axis at a constant speed of 16 revolutions per minute.
A scanning electron microscope (Crossbeam 540, Carl Zeiss, Oberkochen, Germany) and an EDS detector (X-MaxN 80, Oxford Instruments, Abingdon-on-Thames, UK) were used to image and analyze the composition of the GCs obtained within the study.

L.K., A.V., and L.P. would like to thank the Academy of Finland (Academy Project Number 308558) for funding of this research.

This work made use of Tampere Microscopy Center facilities at Tampere University. 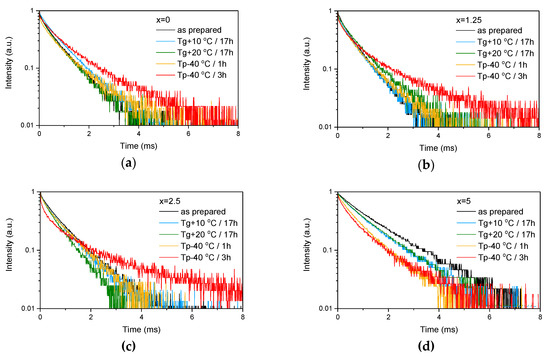 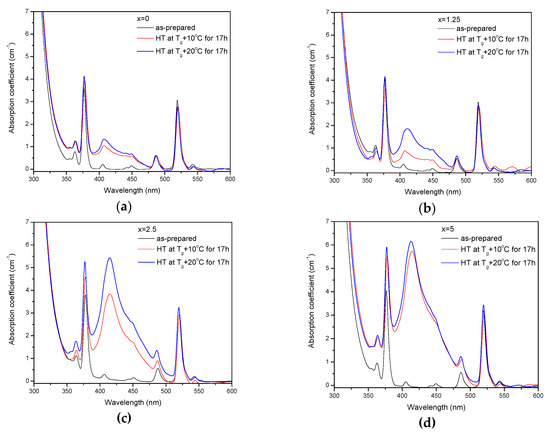 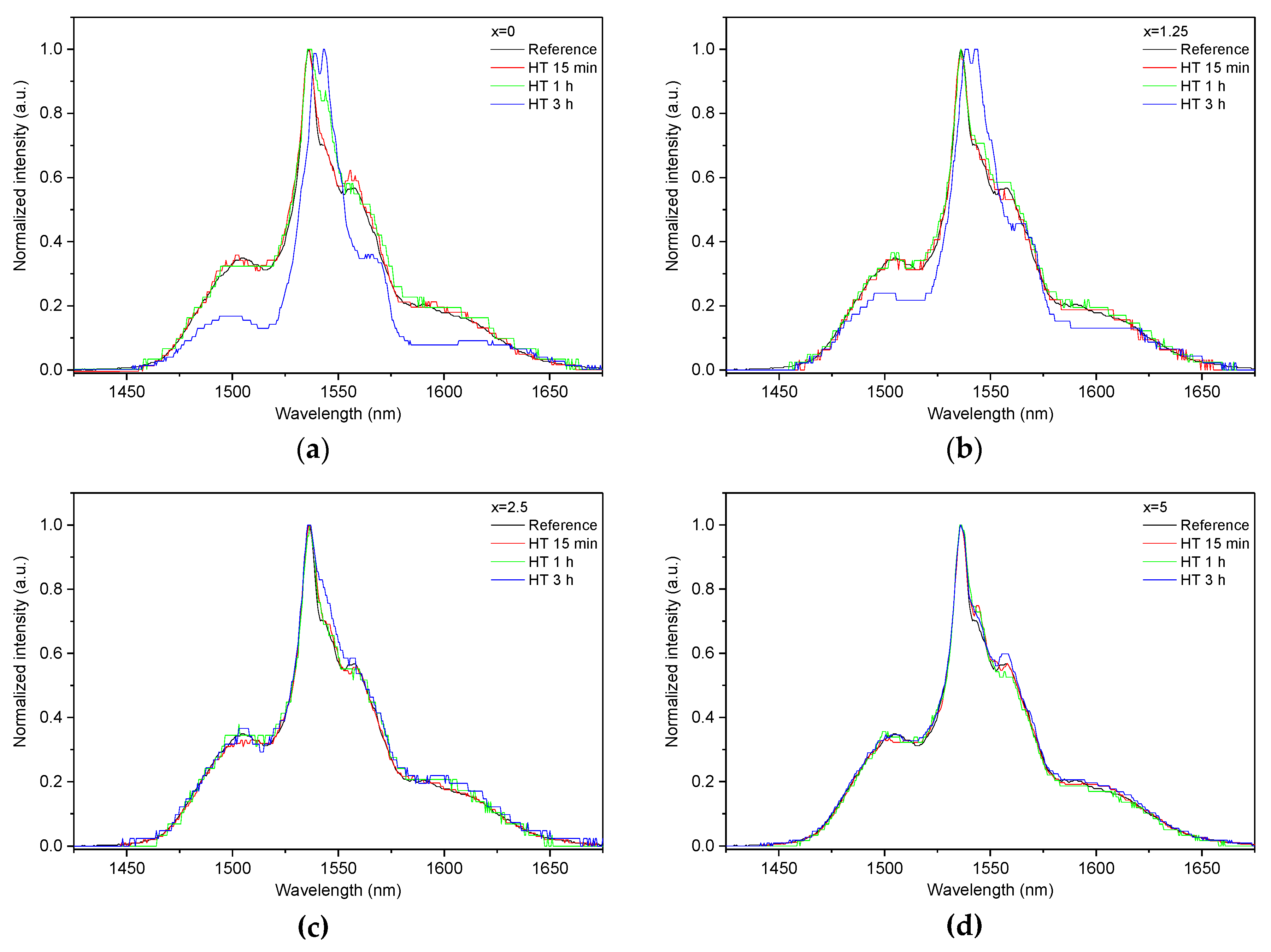 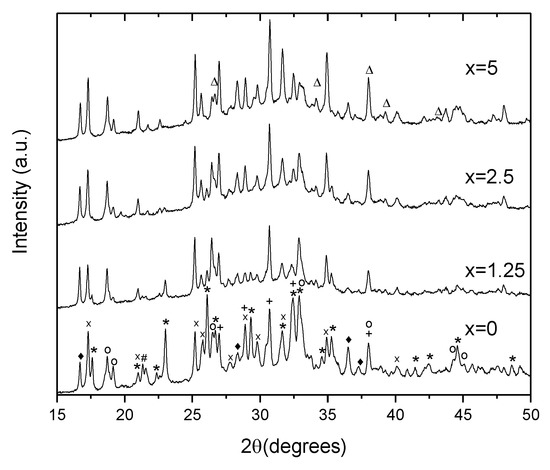