Investigation of the Critical Behavior, Magnetocaloric Effect and Hyperfine Structure in the Fe72Nb8B20 Powders
Previous Article in Special Issue

Root-canal filling is performed to attain a fluidproof seal throughout the root-canal system that was thoroughly cleaned and shaped with the intention of preventing the reinfection of the root-canal space. Endodontic sealers are used in conjunction with solid/semisolid core materials to obliterate irregularities between dentinal wall/tubules and core material, and are thus essential to enhance the three-dimensional sealing of complex root-canal systems [1,2]. Besides possessing this ability, an ideal sealer must offer several properties, including dimensional stability, proper handling, insolubility against tissue fluids, adhesion to canal walls, and biocompatibility. Endodontic sealers can be grouped on the basis of their primary constituents, such as zinc-oxide eugenol, calcium hydroxide, silicone, epoxy and methacrylate resins, and calcium silicates, although none of these is considered ideal [1,2].
One approach to improving endodontic sealers is to endow them with the ability to promote periapical tissue healing accompanied by mineralized tissue formation. In this regard, calcium-silicate-based sealers are promising because they exhibit good biocompatibility and osteogenic potential [3]. These properties are mainly attributed to their bioactivity, i.e., the ability to release calcium and hydroxyl ions from calcium hydroxide produced during the hydration of calcium silicates [4]; thus, the incorporation of bioactivity is a direction to explore in developing new classes of sealers that possess properties that enhance healing.
Surface-reaction-type prereacted glass-ionomer (S-PRG) fillers are a class of bioactive filler material produced by an acid-base reaction between porous silica glass-coated fluoroboroaluminosilicate glass fillers and a polyacrylic acid solution, by which a glass-ionomer phase is formed between the surface (silica glass) phase and the glass core phases [5]. S-PRG fillers have been incorporated in a number of dental materials, including resin composites [6,7] and a prototype root-canal sealer [8]. The bioactivity of S-PRG fillers can be attributed to their ability to release multiple ions, including boron, fluoride, silicate, and strontium [5], which may also provide the following biological reactions. S-PRG fillers inhibit demineralization and induce remineralization in the enamel and dentin because they release fluoride and its recharge [6,9]. S-PRG fillers promote the formation of mineralized apatite crystals via phosphoproteins [10], which support their ability to induce mineralization. Resin composites containing S-PRG fillers exhibit antibacterial activity mainly because of the release of fluoride ions and boric ions [11]. Moreover, recent studies demonstrated that an experimental pulp-capping material containing S-PRG fillers promotes the formation of this reparative dentin in exposed dental pulp in rats [7,12]. Compounds eluted from S-PRG fillers also promote osteoblastic differentiation in human mesenchymal stem cells [13]. On the basis of these findings, it is hypothesized that the incorporation of S-PRG fillers endows endodontic sealers with several beneficial properties, leading to proregenerative effects on periapical bone and cementum. However, little information is available regarding the effects of S-PRG fillers on osteoblast differentiation.
In this study, we examine whether a novel endodontic sealer containing S-PRG fillers could induce osteoblast differentiation. We also identify the signaling mechanisms responsible for the effects of the material on osteoblast differentiation.

Cells were seeded at 3 × 103 cells/cm2 and cultured for 24, 48, or 72 h in the presence or absence (control) of a sealer extract. Cell viability was measured using a WST-8 assay (CCK-8, Dojindo Molecular Technologies, Kumamoto, Japan). Briefly, 10 μL of CCK-8 solution was added to each well of 96-well plate (100 μL of culture medium per well), which was further incubated for one hour. Then, absorbency was measured at 450 nm optical density using a microplate reader (Sunrise, Tecan, Männedorf, Switzerland).

Data were evaluated by one-way analysis of variance (ANOVA) followed by the Tukey–Kramer test (for cell growth) or the Student’s t-test (for osteoblastic-marker expression and mineralized-nodule formation) using Prism 6 software (GraphPad, San Diego, CA, USA). The p values less than 0.05 were regarded as statistically significant.

First, the concentration of elements/ions released from fresh and fixed samples was measured using ICP-AES and a fluoride ion sensor. As shown in Table 1, concentrations of B, Al, Si, and F- were higher, and that of Sr was lower in the fresh PRG+ extract compared with the set PRG+ extract. Moreover, B and Al were detected only in PRG+. CN released Si, Na, and Zn, and AH released Si and Na.

Then, the effects of PRG+ and PRG− extracts on osteoblastic-marker expression and mineralized-nodule formation were evaluated. Kusa-A1 cells cultured in the presence of the set PRG+ extract exhibited elevated expression of ALP and IBSP mRNA (p < 0.05; Figure 1B), and the IBSP protein (Figure 1C), and increased nodule formation (p < 0.05; Figure 1D) compared with those cultured with the set PRG− extract. No mineralized nodule was formed in the cells without culture in the osteogenic medium.

3.4. Effect of CaSR Antagonist on Osteoblastic-Marker Expression, and ERK and p38 Phosphorylation

In this study, root-canal sealers were evaluated for their cytotoxicity and ability to induce osteoblastic differentiation in Kusa-A1 cells, which were established from mouse bone-marrow stromal cells [16] and exhibited properties of mature osteoblasts [17]. Kusa-A1 cells were used for the evaluation of osteoblastic toxicity [18].
The cell-growth test demonstrated that, at the used extract concentrations, extracts from the set samples did not have any inhibitory effects on Kusa-A1 cells (Figure 1A); thus, this concentration was used for analysis of osteoblastic differentiation. However, extracts from fresh PRG+, PRG−, and AH exhibited cytotoxicity (Figure 1A). The cytotoxic effect of fresh AH was consistent with previous reports and most likely caused by the release of free epoxy resin monomers before completion of the setting reaction [19]. The good biocompatibility of CN was also consistent with a previous report [20]. Cytotoxic effects associated with fresh PRG+ and PRG− extracts were significantly weaker than that of the fresh AH extract (Figure 1A). PRG+ is a hybrid cement material that sets by two acid-base reactions of polycarboxylic acid sodium salt with either S-PRG fillers or zinc oxide-based inorganic compound fillers. PRG− sets with only the latter reaction; thus, the cytotoxicity of PRG+ and PRG− may be related to the cytotoxic effect of polycarboxylate and glass-ionomer cements [21]. Elemental analysis revealed that boron and aluminum ions were released from fresh PRG+, but not from fresh PRG− (Table 1). These ions are known to be cytotoxic [22,23], but it is unlikely that they are primarily responsible for the cytotoxicity associated with PRG+ because fresh PRG− exhibited a similar level of cytotoxicity.
The release of strontium from set PRG+ but not from set PRG− (Table 1) is of interest, as strontium promotes the osteogenic differentiation/mineralization of dental papillae cells [14]. Strontium detected in the set PRG+ sample may have originated from the glass-ionomer phase formed during the setting reaction, in which phase a considerable amount of Sr released from acid-eroded glass core of S-PRG fillers may have become trapped. In addition, both PRG+ and PRG− contain strontium compounds (indicated as “additive” in Table 1) as setting regulators, which turn into insoluble salt after setting and thus contribute to the strontium elution of only fresh samples.
Osteoblast differentiation was evaluated by the expression of ALP and IBSP, which are important markers for osteoblast activity during early osteoblast differentiation [24]. ALP initiates the calcification process by providing inorganic phosphates [25], and IBSP is associated with mineral nucleation in the matrix of primary membrane bone [26]. Results also showed that the set PRG+ extracts promoted differentiation and mineralization in Kusa-A1 cells (Figure 1B–D). Among multiple ions released from set PRG+ (Table 1), strontium ions may have had a strong effect because strontium ranelate was shown to promote odontoblast differentiation and mineralization in vitro, and the direct application of strontium ranelate to pulp tissue was found to induce the formation of osteodentin-like mineralized tissue [14]. Furthermore, strontium ranelate also induces osteoblastic differentiation in primary murine bone cells [27] and mesenchymal stem cells [28]. Strontium binds to CaSR, and activated CaSR induces the upregulation of several intracellular signaling pathways, including Akt [14] and Erk1/2 [15]. The phosphorylation of ERK and p38 MAPK signaling was induced by strontium via CaSR activation (Figure 2B), which may be a mechanism of the action of strontium and could be associated with periapical-tissue healing, as is discussed below. Moreover, as boron ions were reported to induce osteoblastic differentiation in stem cells from exfoliated deciduous teeth [23], they may also contribute to the observed PRG+-induced differentiation and mineralization of Kusa-A1 cells. Further study is necessary to reveal the whole function of ions/compounds released from PRG+ sealer in osteoblast differentiation/mineralization.
There are numerous membrane-bound ion channels involved in important physiological processes. Among these channels is the CaSR, which is a class C G-protein-coupled receptor [22] that is expressed in various cells including osteoblasts [29]. CaSR signaling in osteoblasts is essential for their differentiation and mineralization (30]. Results of this study revealed that NPS-2143, a potent CaSR antagonist, down-regulated the osteoblastic gene expression induced by the PRG+ extract in Kusa-A1 cells (Figure 2A). This finding suggests that ions released from PRG+ induce osteoblastic differentiation via the CaSR. Previous studies have shown that strontium ions activate CaSR-dependent signaling in HEK293 cells in a manner similar to calcium ions [31]. Furthermore, CaSR is known to be involved in strontium ranelate-induced osteoblast differentiation and mineralization [32].
CaSR was also linked to several signaling pathways such as EK1/2 [33,34] that are essential for osteoblast differentiation [35]. Moreover, CaSR activation induces the phosphorylation of p38 [36], and the activation of p38 is required for osteoblast differentiation [37]. The results of this study revealed that phosphorylation of ERK and p38 induced by set PRG+ was blocked by the CaSR antagonist (Figure 2B). Strontium-ranelate-induced phosphorylation of ERK, and p38 was also downregulated by the CaSR antagonist. Moreover, the CaSR antagonist blocked the mRNA expression of ALP and IBSP genes, and was upregulated by set PRG+. Taken together, our findings indicate that CaSR activation via ions released from set PRG+, especially strontium ions, and the subsequent activation of ERK and p38 signaling are involved in the observed osteoblastic differentiation and mineralization of Kusa-A1 induced by set PRG+. However, the involvement of signaling pathways independent of ERK and p38, such as the calcineurin/nuclear factor of activated T-cell or Wnt/beta-catenin signaling, or the activation of other ion channels cannot be ruled out.

In conclusion, under the present experimental conditions, PRG+ only showed cytotoxicity in the fresh state, and induced the differentiation and mineralization of Kusa-A1 involving the activation of the ERK and p38 signaling pathways via CaSR. These findings suggest that PRG+ is a promising new class of bioactive root-canal sealer that has the ability to promote periapical-tissue healing and mineralized-tissue formation. However, it is necessary to evaluate several other properties of the material, including sealing ability, structural stability, and other physical properties, before its clinical application.

We thank Stephanie Knowlton for editing a draft of this manuscript.

The authors deny any conflicts of interest related to this study. 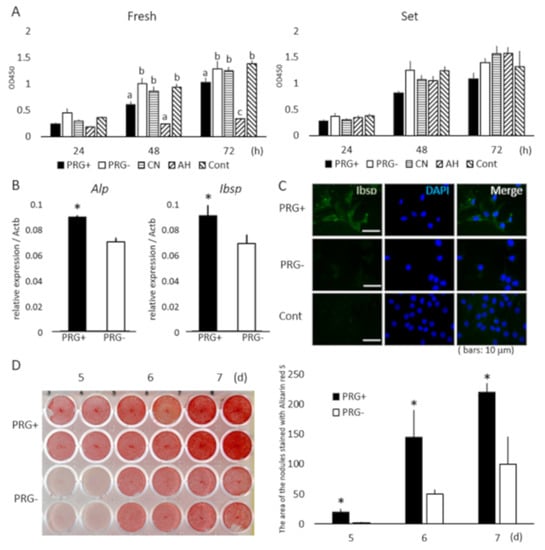 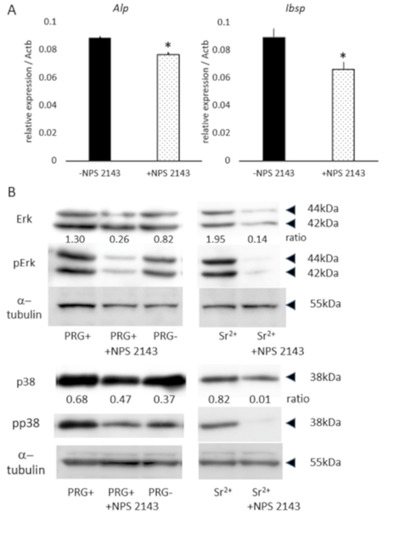 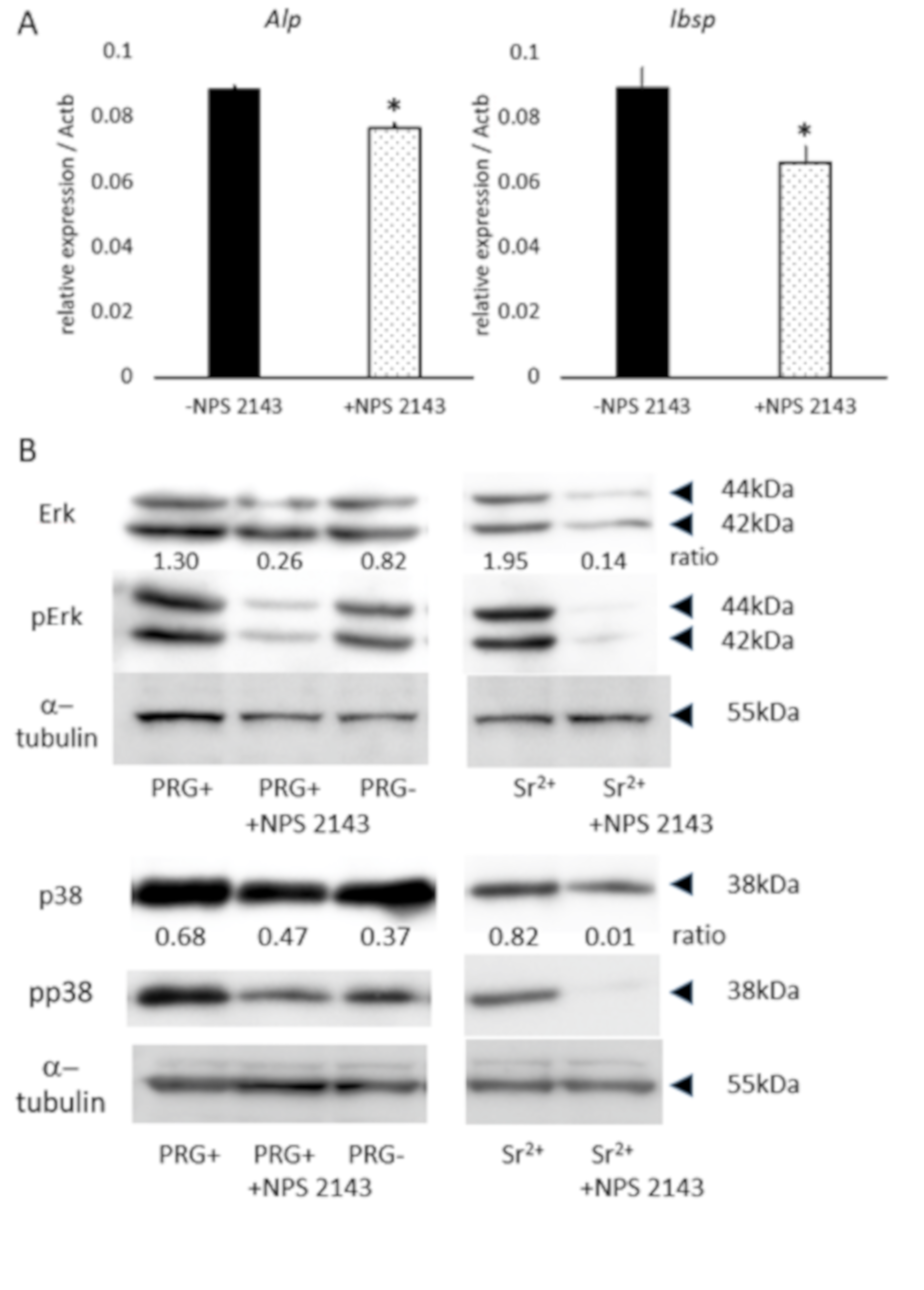