From a mechanical point of view, a native extracellular matrix (ECM) is viscoelastic. It also possesses time-evolving or dynamic behaviour, since pathophysiological processes such as ageing alter their mechanical properties over time. On the other hand, biomaterial research on mechanobiology has focused mainly on the development of substrates with varying stiffness, with a few recent contributions on time- or space-dependent substrate mechanics. This work reports on a new method for engineering dynamic viscoelastic substrates, i.e., substrates in which viscoelastic parameters can change or evolve with time, providing a tool for investigating cell response to the mechanical microenvironment. In particular, a two-step (chemical and enzymatic) crosslinking strategy was implemented to modulate the viscoelastic properties of gelatin hydrogels. First, gels with different glutaraldehyde concentrations were developed to mimic a wide range of soft tissue viscoelastic behaviours. Then their mechanical behaviour was modulated over time using microbial transglutaminase. Typically, enzymatically induced mechanical alterations occurred within the first 24 h of reaction and then the characteristic time constant decreased although the elastic properties were maintained almost constant for up to seven days. Preliminary cell culture tests showed that cells adhered to the gels, and their viability was similar to that of controls. Thus, the strategy proposed in this work is suitable for studying cell response and adaptation to temporal variations of substrate mechanics during culture. View Full-Text
Keywords: viscoelasticity; dynamic mechanical properties; transglutaminase; ageing viscoelasticity; dynamic mechanical properties; transglutaminase; ageing
►▼ Show Figures 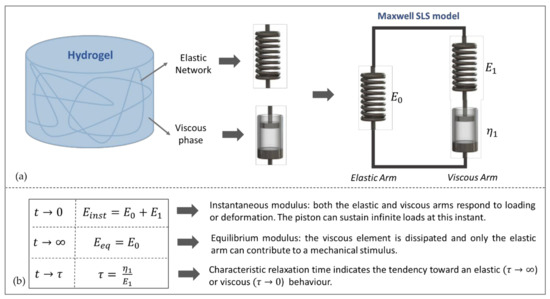