Effect of Temperature, Pressure, and Chemical Composition on the Electrical Conductivity of Schist: Implications for Electrical Structures under the Tibetan Plateau

In this paper, we present the recent progress in the experimental studies of the electrical conductivity of dominant nominally anhydrous minerals in the upper mantle and mantle transition zone of Earth, namely, olivine, pyroxene, garnet, wadsleyite and ringwoodite. The main influence factors, such as temperature, pressure, water content, oxygen fugacity, and anisotropy are discussed in detail. The dominant conduction mechanisms of Fe-bearing silicate minerals involve the iron-related small polaron with a relatively large activation enthalpy and the hydrogen-related defect with lower activation enthalpy. Specifically, we mainly focus on the variation of oxygen fugacity on the electrical conductivity of anhydrous and hydrous mantle minerals, which exhibit clearly different charge transport processes. In representative temperature and pressure environments, the hydrogen of nominally anhydrous minerals can tremendously enhance the electrical conductivity of the upper mantle and transition zone, and the influence of trace structural water (or hydrogen) is substantial. In combination with the geophysical data of magnetotelluric surveys, the laboratory-based electrical conductivity measurements can provide significant constraints to the water distribution in Earth’s interior. View Full-Text
Keywords: electrical conductivity; impedance spectroscopy; mantle; olivine; pyroxene; garnet; wadsleyite; ringwoodite; high-pressure; high-temperature electrical conductivity; impedance spectroscopy; mantle; olivine; pyroxene; garnet; wadsleyite; ringwoodite; high-pressure; high-temperature
►▼ Show Figures 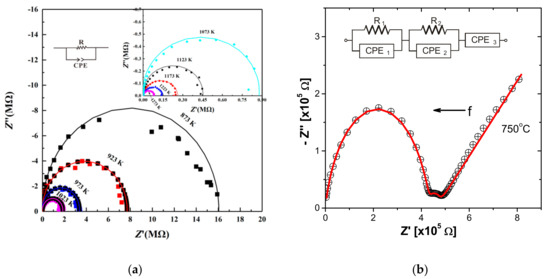