Coumarins are natural compounds that were detected in 80 species of plants. They have numerous applications including the medical, food, tobacco, perfumery, and spirit industries. They show anti-swelling and diastolic effects. However, excess consumption of coumarins may adversely affect our health, because they are easily absorbed from the intestines into the lymph and blood, causing cirrhosis of the liver. Peptidomimetics are molecules whose structure and function are similar to those of peptides. They are an important group of compounds with biological, microbiological, anti-inflammatory, and anti-cancer properties. Therefore, studies on new peptidomimetics, which load the effect of native peptides, whose half-life in the body is much longer due to structural modifications, are extremely important. A preliminary study of coumarin analogues and its derivatives as new potential antimicrobial drugs containing carboxylic acid or ester was performed to determine their basic structure related to their biological features against various types of Gram-stained bacteria by lipopolysaccharide (LPS). We hypothesized that the toxicity (antibacterial activity) of coumarin derivatives is dependent on the of LPS in bacteria and nature and position of the substituent which may be carboxylic acid, hydroxyl groups, or esters. In order to verify this hypothesis, we used K12 (smooth) and R1–R4 (rough) Escherichia coli strains which are characterized by differences in the type of LPS, especially in the O-antigen region, the outermost LPS layer. In our work, we synthesized 17 peptidomimetics containing a coumarin scaffold and checked their influence on K12 and R1–R4 E. coli strains possessing smooth and rough LPS. We also measured the damage of plasmid DNA caused by target compounds. The results of our studies clearly support the conclusion that coumarin peptidomimetics are antagonistic compounds to many of the currently used antibiotics. The high biological activity of the selected coumarin peptidomimetic was associated with identification of the so-called magic methyl groups, which substantially change the biochemical properties of target compounds. Investigating the effects of these compounds is particularly important in the era of increasingly common resistance in bacteria. View Full-Text
Keywords: oxidative stress; coumarin derivatives; Fpg protein—formamidopyrimidine DNA N-glycosylase/AP lyase; LPS—lipopolysaccharide oxidative stress; coumarin derivatives; Fpg protein—formamidopyrimidine DNA N-glycosylase/AP lyase; LPS—lipopolysaccharide
►▼ Show Figures 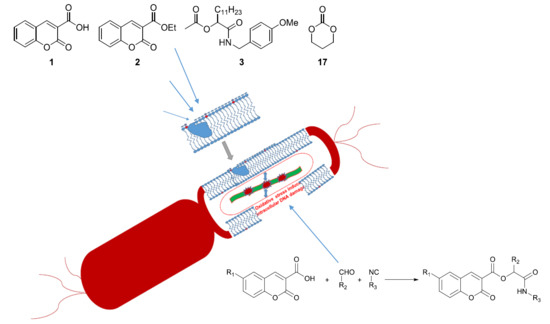