Diamond, as a wide band-gap semiconductor material, has the potential to be exploited under a wide range of extreme operating conditions, including those used for radiation detectors. The radiation tolerance of a single-crystal chemical vapor deposition (scCVD) diamond detector was therefore investigated while heating the device to elevated temperatures. In this way, operation under both high-temperature and high-radiation conditions could be tested simultaneously. To selectively introduce damage in small areas of the detector material, a 5 MeV scanning proton microbeam was used as damaging radiation. The charge collection efficiency (CCE) in the damaged areas was monitored using 2 MeV protons and the ion beam induced charge (IBIC) technique, indicating that the CCE decreases with increasing temperature. This decreasing trend saturates in the temperature range of approximately 660 K, after which CCE recovery is observed. These results suggest that the radiation hardness of diamond detectors deteriorates at elevated temperatures, despite the annealing effects that are also observed. It should be noted that the diamond detector investigated herein retained its very good spectroscopic properties even at an operation temperature of 725 K (≈2% for 2 MeV protons).
Keywords: diamond; detector; high-temperature; ion beam; radiation damage diamond; detector; high-temperature; ion beam; radiation damage

It is expected that diamond, as a large band-gap semiconductor, is able to maintain good electronic properties at working temperatures much higher than those applicable for silicon. One can calculate that the intrinsic carrier concentration in diamond at 1000 K is lower than that for silicon at room temperature [1], which indicates that diamond electronic devices should be able to operate at this and even higher temperatures. This fact makes diamond the material of choice for radiation detection at high temperatures, where the application of other semiconductor materials would be improbable. Although there are an extensive number of publications dealing with the radiation hardness of diamond detectors [2,3,4], there is limited information about detectors operating in both high-radiation and high-temperature environments. Concerning the upper limits of the diamond-based detector operating temperature, in recent years, several authors have shown that significant degradation of signal properties and charge collection efficiency may already appear at rather low temperatures ranging from to [5,6,7]. These inconclusive results demonstrate that the effects of temperature on detector operation need to be studied more thoroughly. Specifically, the thermal properties of metal-semiconductor contact for different metals, the thermal stability of the most important charge traps from electrically active impurities in a diamond crystal lattice, the high-temperature resistance of the electronic-processing chain in the immediate surroundings of the detector, and other effects, including the thermal dependences of radiation hardness and polarization phenomena, should be investigated.
In this work, we attempt to contribute to the understanding of the above-stated effects by using a radiation sensor prepared specifically for high-temperature operation. We have investigated the electronic properties and radiation tolerance of the detector in response to MeV proton beams while increasing the operating temperature. The covered temperature range spanned from room temperature to 725 K, thus increasing the upper temperature limit reported in literature, where the characterization of the spectroscopic properties of diamond-based detectors is successfully performed. Influence of temperature on the radiation hardness has clear relevance for applications of diamond detectors in high radiation environments, such as fusion reactors and accelerator facilities. Furthermore, general diamond electronic properties at high temperatures are also of interest for the development of power semiconductor devices (diodes, switching devices) [8].

The detector used in the experiment was prepared from an electronic grade single-crystal chemical vapor deposition (sc-CVD) diamond produced by Element Six Ltd. (Didcot, UK), with a nominal N concentration of <5 ppb and a <100> crystal orientation. To reduce the effects of polarization and to enable homogeneous depth distribution of defects when irradiated MeV energy proton beams, the diamond was thinned to a thickness of 65 µm by laser slicing and mechanical polishing conducted at Almax easyLab Inc. (Diksmuide, Belgium). Front and back electrodes with a mm area were made by sputtering tungsten on the diamond surfaces. The thickness of the electrodes was approximately 200 nm. Tungsten was chosen with the intention that the metal-semiconductor contact should be able to withstand high temperatures without deterioration of electronic properties. Next, a metallized diamond sample was mounted (using high-temperature silver paste) on the ceramic plate with printed gold electrodes, as shown in the schematic drawing in Figure 1. The whole device was mounted on the universal sample holder for further tests in an irradiation chamber. The bias was applied through the front electrode, while the back electrode was grounded. The detector was heated by a resistive heater below the copper heat sink that was in contact with the back side of the ceramic plate. A type K thermocouple was used for temperature measurement. Heat distribution on the front side of the detector setup was tested using an infrared camera from Optris (Berlin, Germany), model PI640 [9], at different temperatures and showed an average deviation between the camera and the thermocouple reading of 5 K.
Room-temperature measurements showed no significant leakage current (I < 10 pA) up to ±63 V (0.97 V/µm). Irradiation and further spectroscopic characterization were performed in the ion microprobe chamber at the Ruđer Bošković accelerator facility [11]. Proton beams used in this experiment were focused to a spot size of ≈1 µm and could be scanned over the selected regions of the detector, in either low- or high-current mode. High-current mode (∼1–10 pA) was used for introduction of damage (irradiation), while low-current mode (<fA) was used for subsequent probing of the detector energy response with ion beam induced charge (IBIC) technique [12].
The IBIC technique used single ions to induce electron-hole pairs by ionizations that occur along the ion penetration trajectory. In the presence of an electric field, charge carriers move creating a charge signal at the sensing electrodes (IBIC signal). The signal is reduced if charge carriers (electrons or holes) are trapped by the electrically active defects in the crystal lattice. More information on the trapping-detrapping process and IBIC signal formation can be found in literature [13,14,15].
In the case of diamond, it is also important to minimize the density of injected charge in order to avoid a local buildup of the internal electric field due to the charge being trapped in deep traps. This internal field can screen the externally applied electric field (detector bias) and thus diminish the charge collection efficiency (CCE) in that area (polarization effect). Short range heavy ions produce high ionization in small volumes resulting in a higher probability for buildup of polarization [16,17,18]. In our experimental setting, long range protons were therefore used, producing no observable polarization in low-current mode.
It is important to note that the applied fluences during the IBIC probing cycles are insignificant and do not contribute to the defect production noticeable for the device operation.
Signal processing electronics for the IBIC technique are listed in the description of Figure 1. Energy calibration of the electronic chain was performed with a silicon surface barrier detector and a pulse generator. To calibrate the collected charge in the diamond detector, diamond e-h pair creation energy was assumed to be 13 eV [19], while a value of 3.62 eV was used for silicon.

In summary, a single-crystal CVD diamond detector, prepared specifically for high-temperature operation, has been tested at operating temperatures up to 725 K. The detector showed stable CCE (≈95%) and spectroscopic resolution (≈2%) for the full tested temperature range. The effects of temperature on the radiation hardness of the device operating at rather low electric fields (<1 V/µm) were much more pronounced, as the CCE showed a decrease of up to 40% after irradiation with 5 MeV proton fluences ranging from to cm. Saturation and recovery of the CCE is observed at temperatures higher than 660 K, which is very promising but requires further investigation. Analysis of the CCE trend at higher temperatures could provide further insights about competing contributions that affect CCE behavior. An upgrade to our heating setup is being prepared that will enable testing on higher temperatures as well as monitoring of the operating long-term stability at elevated temperatures. Moreover, further high temperature experiments are planned with short-range ion probes where electron and hole contributions in signal properties can be separated.
It seems that the critical components that limit successful application of diamond-based radiation sensors at high temperatures are not only inherent to the properties of the exploited diamond material, but also in the thermal resilience of the components that are used for device mounting and signal processing. More systematic studies that would address these issues are required to test the true operating limits of these devices.

This work was carried out within the framework of the EUROfusion Consortium and has received funding from the 2014-2018 and 2019-2020 Euratom research and training programs under grant agreement No 633053. The authors also acknowledge financial support from the European Regional Development Fund project for the ‘Center of Excellence for Advanced Materials and Sensing Devices’ (Grant No. KK.01.1.1.01.0001) and the IAEA Research Contract F11020. 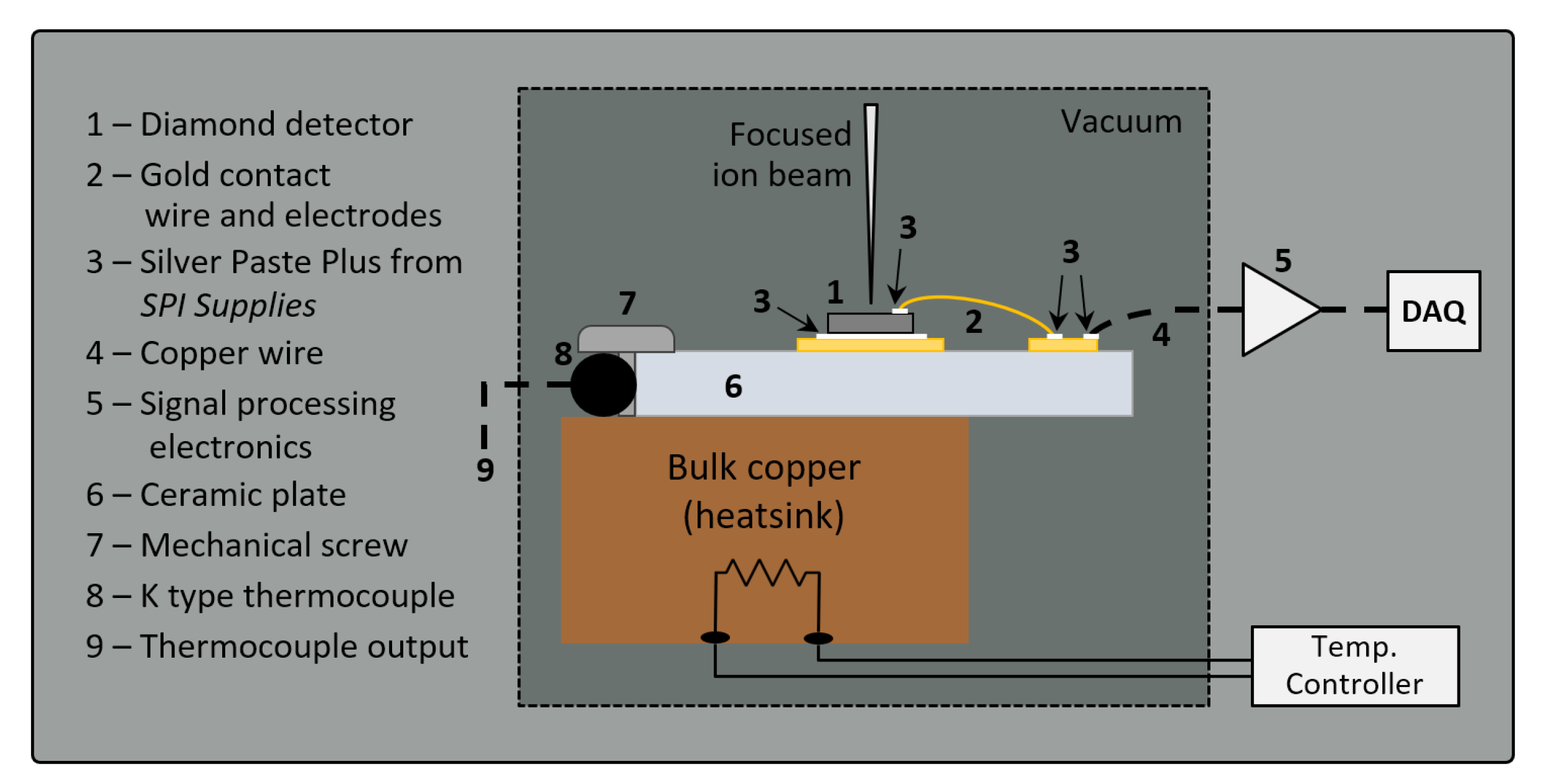 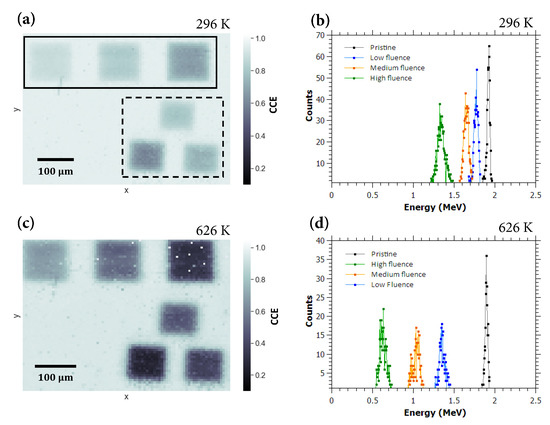 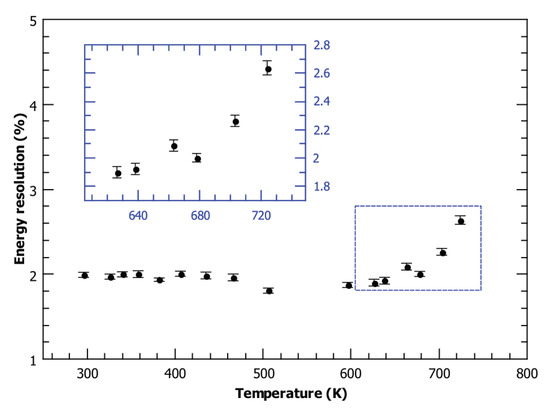 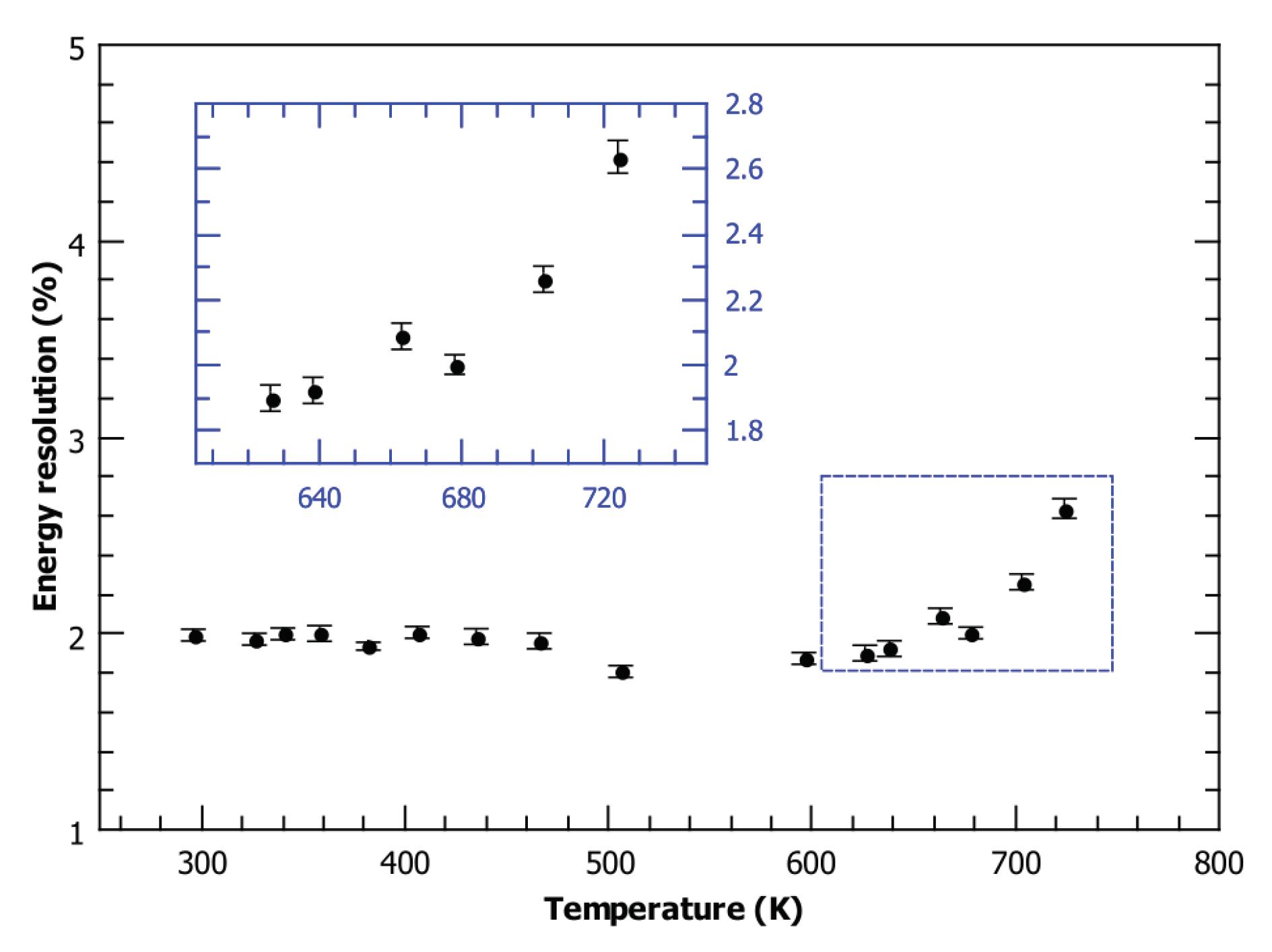 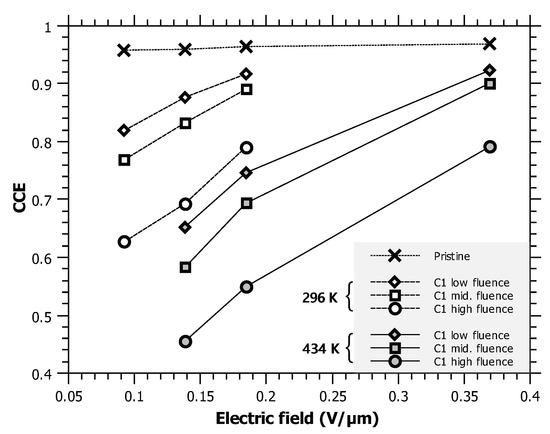 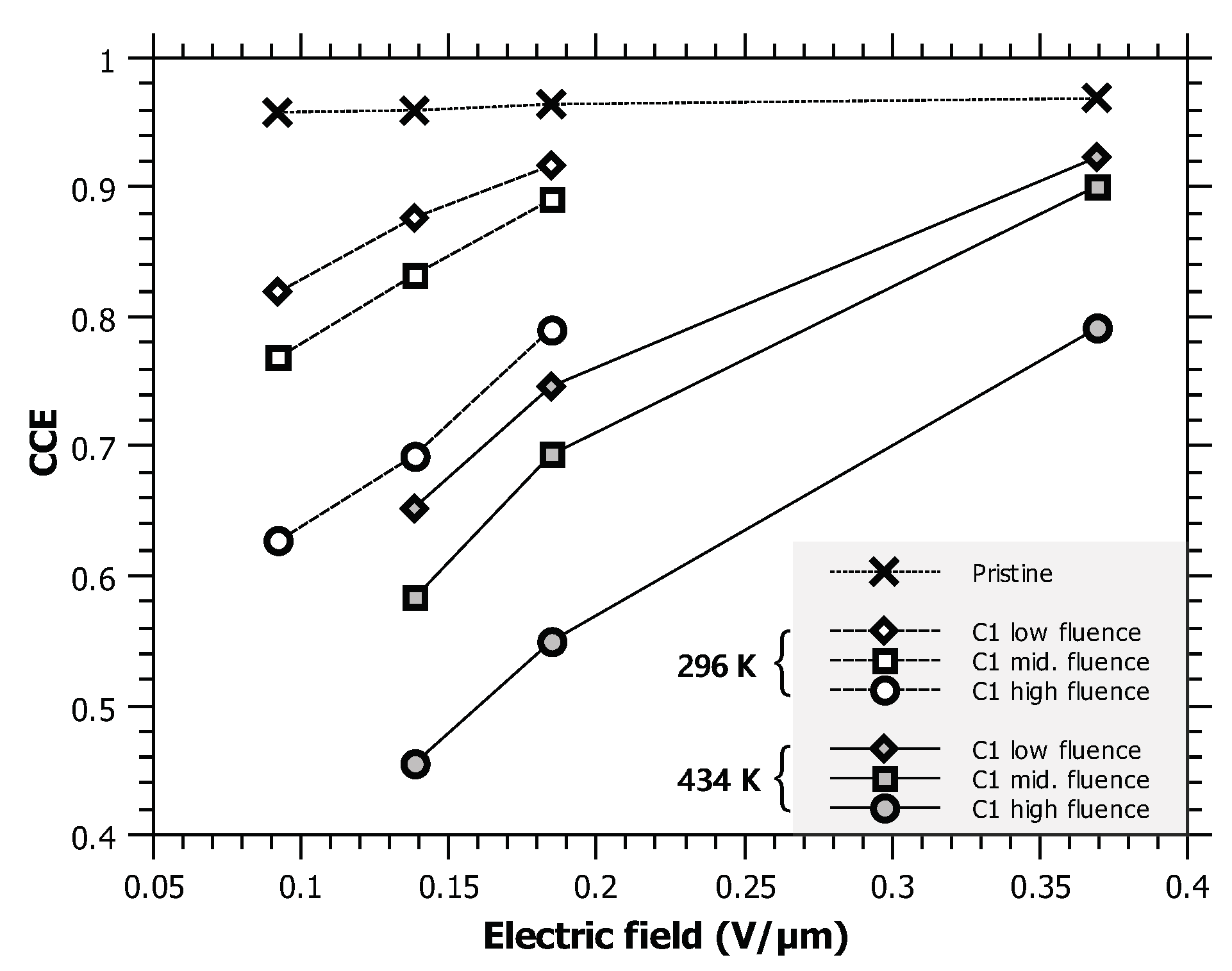