In this paper, zeolite sands with minimum and maximum particle sizes of 1 mm and 3 mm, respectively, were used as internal curing agents of UHPC. To observe the influence of calcined zeolite sand on UHPC, natural zeolite sand particles were heated for 30 min in a muffle furnace at 500 °C. Figure 1 shows calcined zeolite sand after being calcined by a muffle furnace. The binder materials included Type I ordinary Portland cement (OPC) and silica fume (SF).
The chemical compositions of cement, silica fume, and zeolite sand, measured by X-ray fluorescence (XRF), are shown in Table 1.
The XRF fused cast bead method (ISO 12677:2003) was used in the sample preparation (XRF-Scientific, Tokyo, Japan). Samples of lithium tetraborate and lithium metaborate (each ~4 g) and a test sample (~0.8 g) were mixed for preparing the beads. The resistance furnace was heated to a fixed temperature of 1025 ± 25 °C [28].
The SEM images of the natural zeolite sand and calcined zeolite sand are shown in Figure 2.
Microscopic observation of the sheet samples was performed using a high-resolution field emission scanning electron microscope (S-4300, Hitachi, Tokyo, Japan) with an acceleration voltage of 1.5 kV and an emission current of 7000 nA. The zeolite sands were broken, and the inner sheet was selected for testing. Prior to microscopic observation, the surface of the samples was coated with platinum for 30 min using a Hitachi E-1010 ion sputterer (Tokyo, Japan) [28]. As shown in Figure 2, compared with natural zeolite sand, calcined zeolite sand has more pores and even a greater porosity distribution. A fine aggregate (standard sand), with a maximum particle size of 3.0 mm, was used.
To achieve the objectives of this study, two sets of tests were conducted. In the first test group, the natural zeolite sand was used as the internal curing agent, and the additional amounts were 15 wt.% and 30 wt.% of standard sand, respectively. The UHPC specimens are marked as NZ15 and NZ30. In the second test group, calcined zeolite sand was used as an internal curing agent, and the additional amounts ware 15 wt.% and 30 wt.% of standard sand, respectively. The UHPC specimens are marked as CZ15 and CZ30. The water absorbed by the zeolite sands, before setting, has no effect on the porosity of the concrete and is therefore not considered to be part of the ‘water/cement ratio’ of a particular concrete mixture [29]. The mixture proportions of the UHPC specimens are shown in Table 2.
This paper focuses on the internal curing effect of zeolite sand on strength and autogenous shrinkage. Since steel fiber is mainly used to improve the ductility of UHPC, and ductility is not the aim of this paper, we did not use fiber.
Figure 3 shows detailed information on the mixing procedure, adopted to produce self-curing UHPCs.
The natural zeolite sand and calcined zeolite sand, soaked in water for 48 h, were taken out. The soaked zeolite sands were unfolded with a paper towel, and a paper towel was placed on the surface of the zeolite sands to dry the surface of the zeolite sands [30]. The above steps were repeated until a color change in the paper towel could not be visually detected. At this point, it was assumed that the zeolite sands had reached a surface drying state [31]. All binders, standard sand, and zeolite sands are placed in a mortar mixer and stirred at a low speed for 30 s. Water, uniformly mixed with SP, was added to the solid material and stirred at a low speed for 150 s. The process was stopped for 30 s, and the powder that was not sufficiently contacted on the paddles and inner wall of the mortar mixer was scraped. The mixture was further stirred at a high speed for 180 s, and then the mortar was poured into a mold for shaping and curing.

A corrugated tube method, based on ASTM C1698–09 [33], was used to measure the linear autogenous shrinkage of cement mortars. A corrugated tube with concrete was placed on the steel support, and one end of the corrugated tube was absorbed by a magnet. The other end was in contact with a linear variable differential transducer (LVDT) to measure the deformation throughout the experiment. The LVDT collected data through computation every 10 min. The whole setup was maintained in a constant temperature humidity chamber at 20 °C, until the test age of 7 days. It should be noted that in order to avoid a large quantity of entrapped air in the test specimens, mixtures were slowly poured into the corrugated mold with the vibrating table turned on.

X-ray powder diffraction (XRD) analysis was conducted on the raw materials (natural zeolite sand and calcined zeolite sand) and the samples (after 28 days of curing) after the hydration stoppage treatment. The solvent exchange method was used for hydration stoppage of the hydrated samples [35]. We ground the 5 g of hydrated samples into a powder. The powder was then immersed in 150 mL of isopropanol (CP grade) for 15 min. The suspension was vacuum filtered, rinsed once with isopropanol, and rinsed twice with ether (CP grade). The filtered solids were dried in a drying oven at 40 °C for 8 min. Finally, the dried powder was stored in a vacuum dryer. Testing of samples should be performed as soon as possible, preferably within two days. The raw materials and samples were ground until the sample surface was flat and smooth. The sample surface area and thickness was large enough to avoid beam overflow and sample transparency aberrations [36]. XRD was carried out using a Panalytical X’pert-pro MPD diffractometer (Panalytical, Almelo, The Netherlands), with CuKα radiation (λ = 1.5404 Å) [37]. The measurements were conducted in the 2θ range of 5°–70°, with a 2θ scan rate of 0.1°/min.

In previous studies, most of the specimens for isothermal calorimetry were pastes, without a fine aggregate. These studies ignored the effect of fine aggregates on the heat of hydration. Conversely, in this study, to clarify the effect of fine zeolite aggregates on the heat of hydration, a mortar specimen with a fine zeolite aggregate was used for isothermal calorimetry. The heat release rate and accumulated hydration heat of the adhesives were measured using a TAM-Air (TA Instruments, New Castle, DE, USA) for 72 h at 20 °C. Due to the low water binders (w/b = 0.2), all mortars were mixed by a mortar mixer and transferred to glass bottles [38].

XRD measurements were conducted on both the natural zeolite sand and calcined zeolite sand, and the experimental results are shown in Figure 6.
Calcined zeolite sand belongs to the heulandite series, which includes a kind of thermally stable heulandite zeolite (CaO·Al2O3·7SiO2·5H2O), synthesized by CaO·Al2O3·7SiO2 in the temperature range of 250–360 °C. The calcined zeolite sand belongs to the epistilbite series (CaO·Al2O3·5.5SiO2·5H2O), synthesized by the CaO·Al2O3·5.5SiO2 composite [42]. Due to the change of temperature during the calcination process, the crystal shapes of the zeolites are changed, but there is no change in the chemical compositions. Previous studies have shown that calcining natural zeolite will lead to a collapse of crystal structures [43]. There is also an unnamed zeolite phase and mineral impurities, such as quartz.
The XRD patterns of mortars at the curing age of 28 days are presented in Figure 7.
Since the diffraction peak of the sand would cause interference, a 2θ degree between 5 and 20° is selected. Compared with the control group, no new hydration products are generated, because no new peaks appeared. This is mainly because zeolite sands, as lightweight aggregates added to concretes, do not participate in a binder hydration reaction.
According to the peak of calcium hydroxide in the Figure 7, compared with the control group, Z0, the peak of calcium hydroxide increased significantly with the addition of zeolite sand.
This is because the specimens containing zeolite sands contain more internal curing water [44]. With the occurrence of the cement hydration reaction, the water in the reservoir is released to further promote cement hydration, and more hydration products are obtained. Since zeolite sands are placed into the system as lightweight aggregates, the zeolite sands themselves do not participate in the early cement hydration reactions. The Ca(OH)2 peak of UHPC, containing calcined zeolite sand, is higher than that containing natural zeolite sand, mixed with the same content. This is because the calcined zeolite sand can absorb more internal curing water, which is later released to further participate in a hydration reaction. More hydration products are produced, leading to an increase in the peaks of the hydration products. The difference between the corresponding Ca(OH)2 peaks in CZ15/30 and those in NZ15/30 are not obvious. XRD qualitative analysis method can determine the type and relative quantity of hydration productions, but it cannot determine the specific amount of hydration products. Therefore, the XRD qualitative analysis is not the best method of analyzing the degree of hydration. TGA can be used as a quantitative analysis method to measure the content of chemically bound water and calcium hydroxide. Compared with XRD qualitative analysis, TGA is a much better way to determine the degree of hydration, and a TGA experimental study will be conducted in the future.

UHPC can be divided into two types, namely, precast UPHC and cast-in-place UHPC. For cast-in-place UHPC, autogenous shrinkage is an essential constraint because UHPC has a very low water-to-binder ratio. Construction companies are urgently seeking a solution to mitigate or minimize autogenous shrinkage without impairing the strength. In this study, we find the calcined zeolite sand is an effective internal curing material for UHPC. Compared with the control specimen, the autogenous shrinkage of concrete with 30% calcined zeolite sand is significantly lower while the 28-day compressive strength is similar.
On the other hand, the compressive strength of the UHPC designed in this paper did not reach 150 MPa (the general strength of UHPC). This may due to many factors affecting the strength of UHPC, such as: fibers [46], binder composition [47], particle size distribution, compactness of aggregate, and curing procedure [48]. The addition of fiber can improve the strength and ductility of concrete. The early-age high temperature curing may also contribute to the strength increment of concrete [49]. In addition, calcined-zeolite sand has some weak points; for example, the intrinsic porosity of the calcined zeolite sand may decrease the compactness of UHPC. These weak points should be further studied in future research [11,50].

This research is supported by the Basic Science Research Program through the National Research Foundation of Korea (NRF), funded by the Ministry of Science, ICT and Future Planning (no. 2015R1A5A1037548), and an NRF grant (no. NRF-2020R1A2C4002093).

The authors declared that they have no conflicts of interest to this work. We declare that we do not have any commercial or associative interest that represents a conflict of interest in connection with the work submitted. 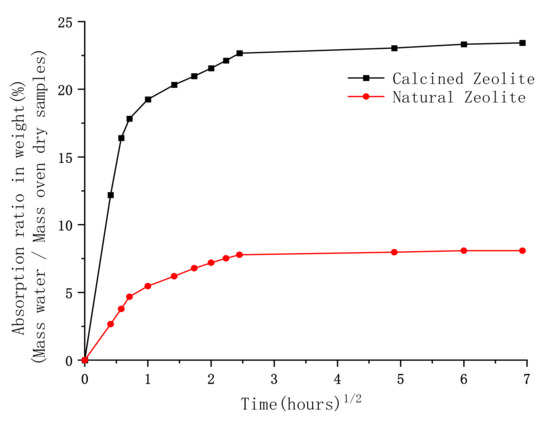 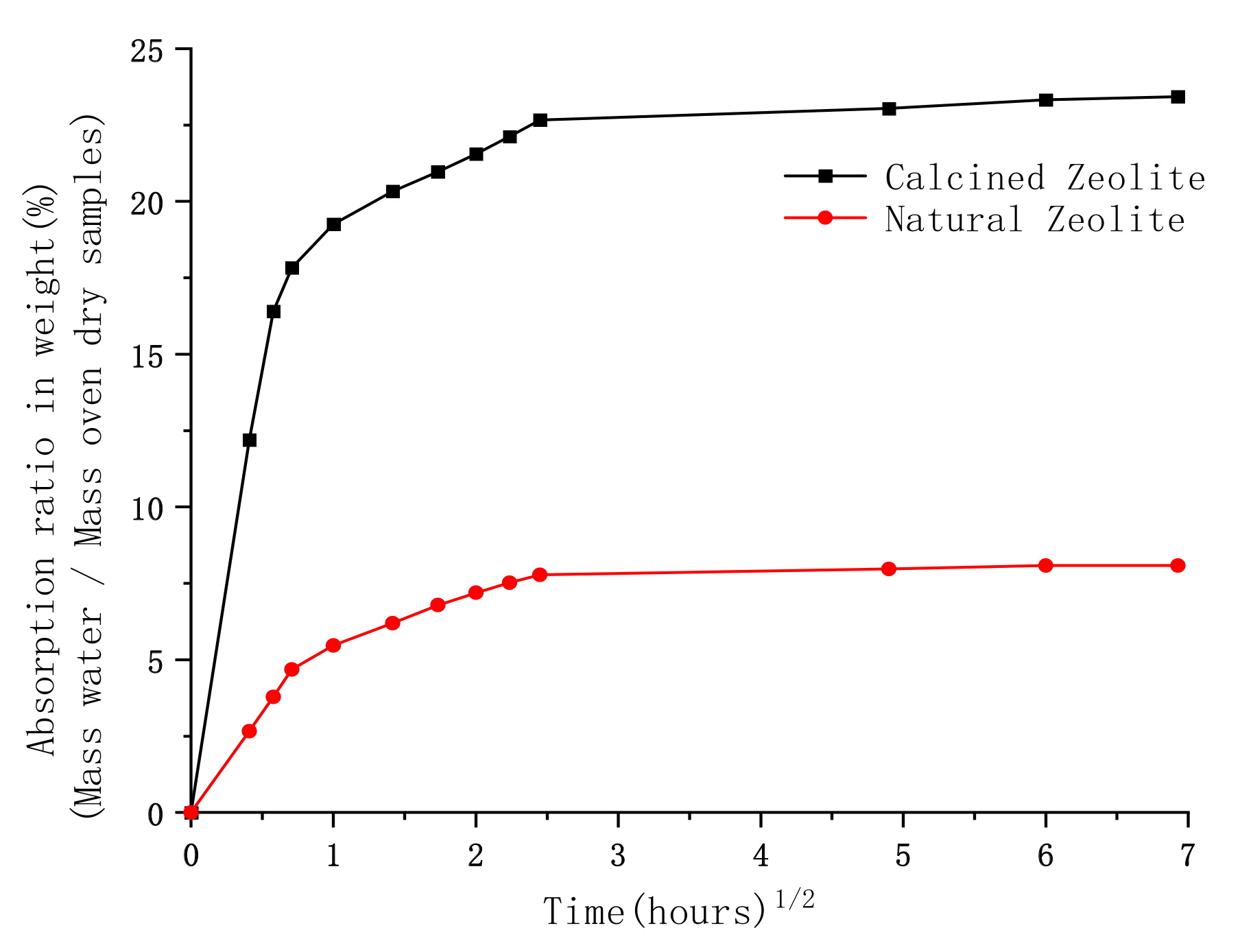 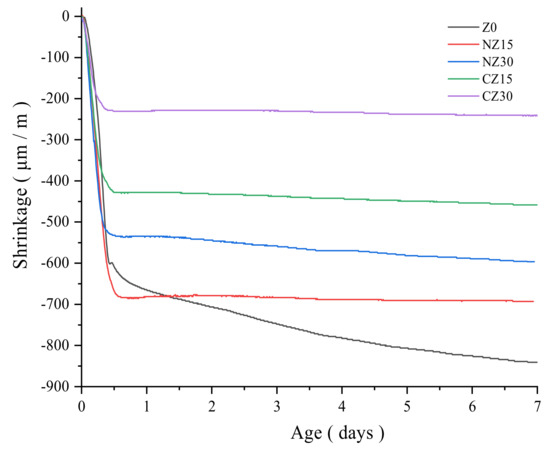 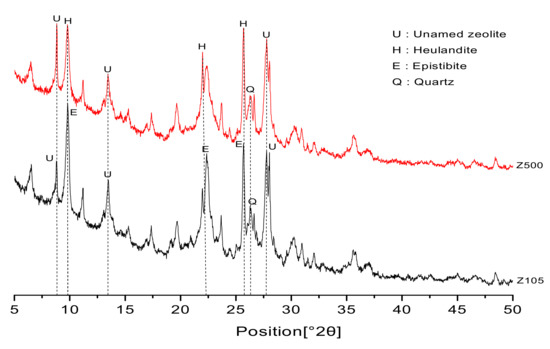 Table 2. Mix proportions of ultra-high-performance concretes (UHPCs)
Table 2. Mix proportions of ultra-high-performance concretes (UHPCs)
© 2020 by the authors. Licensee MDPI, Basel, Switzerland. This article is an open access article distributed under the terms and conditions of the Creative Commons Attribution (CC BY) license (http://creativecommons.org/licenses/by/4.0/).
We use cookies on our website to ensure you get the best experience. Read more about our cookies here.
Accept
We have just recently launched a new version of our website. Help us to further improve by taking part in this short 5 minute survey here. here.
Never show this again