PMMA-Based Bone Cements and the Problem of Joint Arthroplasty Infections: Status and New Perspectives
Next Article in Special Issue

Magnetic Resonance Imaging and Its Effects on Metallic Brackets and Wires: Does It Alter the Temperature and Bonding Efficacy of Orthodontic Devices?

Influence of Dental Composite Viscosity in Attachment Reproduction: An Experimental in Vitro Study

Background: Attachments are composite auxiliaries that are used during a clear aligner orthodontic therapy to achieve difficult tooth movements. Two important factors are the planned configuration and the actual position of these auxiliary elements to obtain the desired force system. The aim of the present study was to evaluate the role of different composite materials in the correct reproduction of attachment shape and position. Methods: The materials that were considered in the study were a flowable resin, a dental restorative material, and an orthodontic composite. The attachments were created on three models of extracted teeth. Once the impressions were performed, 25 attachments of different shapes were added onto each virtual model to obtain the necessary templates to make the attachments. Each tested material was used to create a set of 25 attachments that were then scanned with an accuracy of 10μm. The resultant STL (stereolithography) files were superimposed onto the ones from the initial virtual plan, through Geomagic software, and the aligned scans were then compared while using a color map. The parameters that were calculated to make a comparison between the created attachments and the ideal ones were the maximum deviation in defect and in excess, the overflow, and the volume’s difference. In addition to these measurements comparing the three above-mentioned groups, the difference in volume between all the ideal and realized samples were analyzed. To test for differences among the three groups, a one-way Analysis of variance (ANOVA) was used with a Bonferroni post-hoc test. The level of significance was set at p < 0.05. Results: No statistically significant results were found between the three groups regarding the maximum value in defect, the maximum value in excess, and the minimum value as control, while a statistically significant difference was found between the overflow of orthodontic resin when compared to the flowable composite. Conclusions: The three materials that were used in this study were appropriate for attachment fabrication. The fidelity of attachment reproduction was similar when using the three different composites. The orthodontic composite showed more overflow when compared with the flowable one. View Full-Text
Keywords: orthodontics; attachments; composite resin; clear aligners; detail reproduction; viscosity degree orthodontics; attachments; composite resin; clear aligners; detail reproduction; viscosity degree
►▼ Show Figures 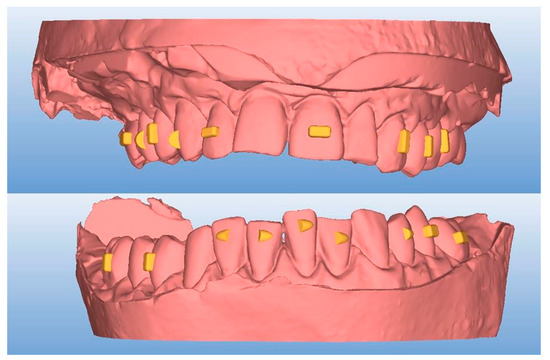