:
To better understand the regulation and function of cellular interactions, three-dimensional (3D) assemblies of single cells and subsequent functional analysis are gaining popularity in many research fields. While we have developed strategies to build stable cellular structures using optical tweezers in a minimally invasive state, methods for manipulating a wide range of cell types have yet to be established. To mimic organ-like structures, the construction of 3D cellular assemblies with variety of cell types is essential. Our recent studies have shown that the presence of nonspecific soluble polymers in aqueous solution is the key to creating stable 3D cellular assemblies efficiently. The present study further expands on the construction of 3D single cell assemblies using two different cell types. We have successfully generated 3D cellular assemblies, using GFP-labeled adipose tissue-derived stem cells and endothelial cells by using optical tweezers. Our findings will support the development of future applications to further characterize cellular interactions in tissue regeneration.
Keywords:
mesenchymal stem cells; endothelial cells; three-dimensional assemblies; composites with different cell types; depletion effect of polymer

Mesenchymal stem cells (MSCs) are self-renewing and multi-potent progenitor cells. They differentiate into various mesodermal cell types including adipocytes, osteocytes, and chondrocytes [1]. MSCs are relatively safe, and their clinical use is expanding [2,3,4]. Recent studies have demonstrated that organ-specific interactions between MSCs and endothelial cells play an important role in vascular formation [5]. Interestingly, three-dimensional (3D) cell culture has been performed with MSCs [6]. Kolesky et al. successfully generated pseudo-blood vessels using a mixture of mesenchymal stem cells, vascular endothelial cells, and fibroblasts [7]. Three-dimensional cultures of MSCs lead to chondrogenic differentiation and the production of a matrix for cartilage repair [8]. These findings suggest that the 3D structure of MSCs as well as their interaction with other cells types play important roles in governing their function. Nonetheless, cell-to-cell interactions between MSCs and other cell types within 3D structures have yet to be comprehensively explored.
To generate 3D cellular assemblies in a microenvironment, the development of a methodology that allows for the manipulation of single cells is vital to expanding our understanding of cellular interactions [9,10,11,12,13,14]. Establishing this methodology will provide further insight into the relationship between 3D cellular structures and functions. Thus far, we have successfully established an experimental system to characterize single-cell 3D placement using optical tweezers [15]. Generally, cell–cell contact is inhibited by repulsive interactions, such as electrostatic repulsion, arising from the surface charge of cells [16], short-range repulsion from the hydration structures on the membrane surface [17], and steric repulsion arising from membrane undulation [18,19]. Nonetheless, in diluted polyethylene glycol (PEG) solution, cell pairs stably adhere when they are forced to make contact for more than five minutes using optical tweezers [15]. In the study, stable 3D cellular assemblies were generated by adhering cells one after another. Accordingly, the depletion interaction [20] derived from the entropic effect of PEG molecules likely acts as an attractive force, which overpowers the repulsive forces between cells [15]. Furthermore, natural polymers, including dextran (DEX), stabilize 3D cellular assemblies due to the depletion force [21,22]. In this manner, we have established a nearly non-invasive cell construction system using optical tweezers and the depletion effect of polymers. Nevertheless, methods for manipulating a wide range of cell types have yet to be established. To mimic cellular interactions between a variety of cell types, generating 3D cellular assemblies using different two cell types is essential. Using our methodology, stable 3D cellular assembly can be constructed from different cell types through a mild treatment process. As minimal physical stress is applied to the cells by using natural biopolymer solutions, including DEX, this methodology is superior to other biofabrication techniques such as 3D bioprinting in generating stable 3D cellular assemblies.
In this study, we demonstrate that two different cell types, MSCs and endothelial cells, are located at desired positions in a 3D cellular assembly by using optical tweezers. Accordingly, this methodology is expected to provide a novel approach to characterize the interactions between MSCs and endothelial cells, as well as contribute to the development of regenerative medicine.

Optical trapping with a double laser beam was carried out using a commercial optical tweezer instrument (NanoTracker 2, JPK Instruments, Berlin, Germany), which was attached to an inverted microscope (IX71, Olympus, Tokyo, Japan) equipped with a charge-coupled device (CCD) camera (DFK 31AF03, The Imaging Source, Taipei, Taiwan). A 1064-nm continuous wave (CW) laser beam was split into two beams by a polarization beam splitter. Both beams were focused on the sample through a water-immersed objective lens (60×, N.A. = 1.2) for independent trapping. This experimental setup is known as a double-beam configuration [24]. One of these focal points could be moved with a piezo-mirror (focal point 1), while the other was fixed at the same position (focal point 2). In the experiments of Figure 1, Figure 2 and Figure 3 and Figure 4A,B, the cells were manipulated using only the laser beam irradiated to focal point 1. On the other hand, both laser beams irradiated to focal points 1 and 2 were used in the experiment of Figure 4C. The laser’s power at each focal point was set between 40–130 mW. All the experiments were carried out at room temperature (i.e., 25 °C). The identification of ASCs (GFP labeled) and MS1 cells was performed by stimulating these cells with blue light (wavelength of 470 nm) through a GFP filter. To prevent autofluorescence and glare, light-emitting diodes (LEDs) were turned off during cell identification. Pseudo-color processing was performed on the figure as well. ImageJ and Inkscape were used for image processing. The acquired microscopic image was converted to eight bits using ImageJ; then, a pseudo-color image was created with ASC-GFP as green and MS1 as red. Pseudo-color processing was performed by superimposing the layer created by mask processing over the 3D structure, which was generated by manipulating cells with optical tweezers in a polymer solution. The total construction time of the cellular assembly was several minutes (data not shown). In our cell manipulation experiments, cell–cell contact was operated by a remote control with optical tweezers in DEX solution. This allowed us to induce the adherence of cells without using high-voltage laser potential. If the power of the near infrared laser used was 100 mW at the focal point, the cell temperature rise was assumed to be ca. 1 °C [25].

ASCs (GFP) and MS1 cells were cultured in a six-well dish (Thermo Fisher Scientific, Waltham, MA, USA) and treated with 40 mg/mL of DEX. Cell viability was verified with trypan blue staining after 24 h.

In conclusion, we have successfully generated 3D cellular assemblies, using adipose tissue-derived stem cells and endothelial cells using optical tweezers in the presence of DEX. Using optical tweezers, we have successfully constructed stable 3D cellular assemblies in the presence of DEX and buffer solution. Together with our previous results on the formation of stable cell–cell contact in the presence of solvable macromolecules, our novel methodology is expected to be applicable to various culture cells for the construction of 3D cellular structures. Together, our findings may lead to the development of future applications to further characterize cellular interactions to regenerate tissues.

This study was supported by JSPS KAKENHI Grant-in-Aid for Scientific Research (A)15H02121. This study was also supported by a Polish grant from the KNOW (Leading National Research Centre) Scientific Consortium “Healthy Animal–Safe Food”, decision of Ministry of Science and Higher Education No. 05-1/KNOW2/2015.

The authors thank Shu Hashimoto, Aoi Yoshida, Shuto Tsuji, and Taeko Ohta at Doshisha University for their generous assistance with the experimental setup. 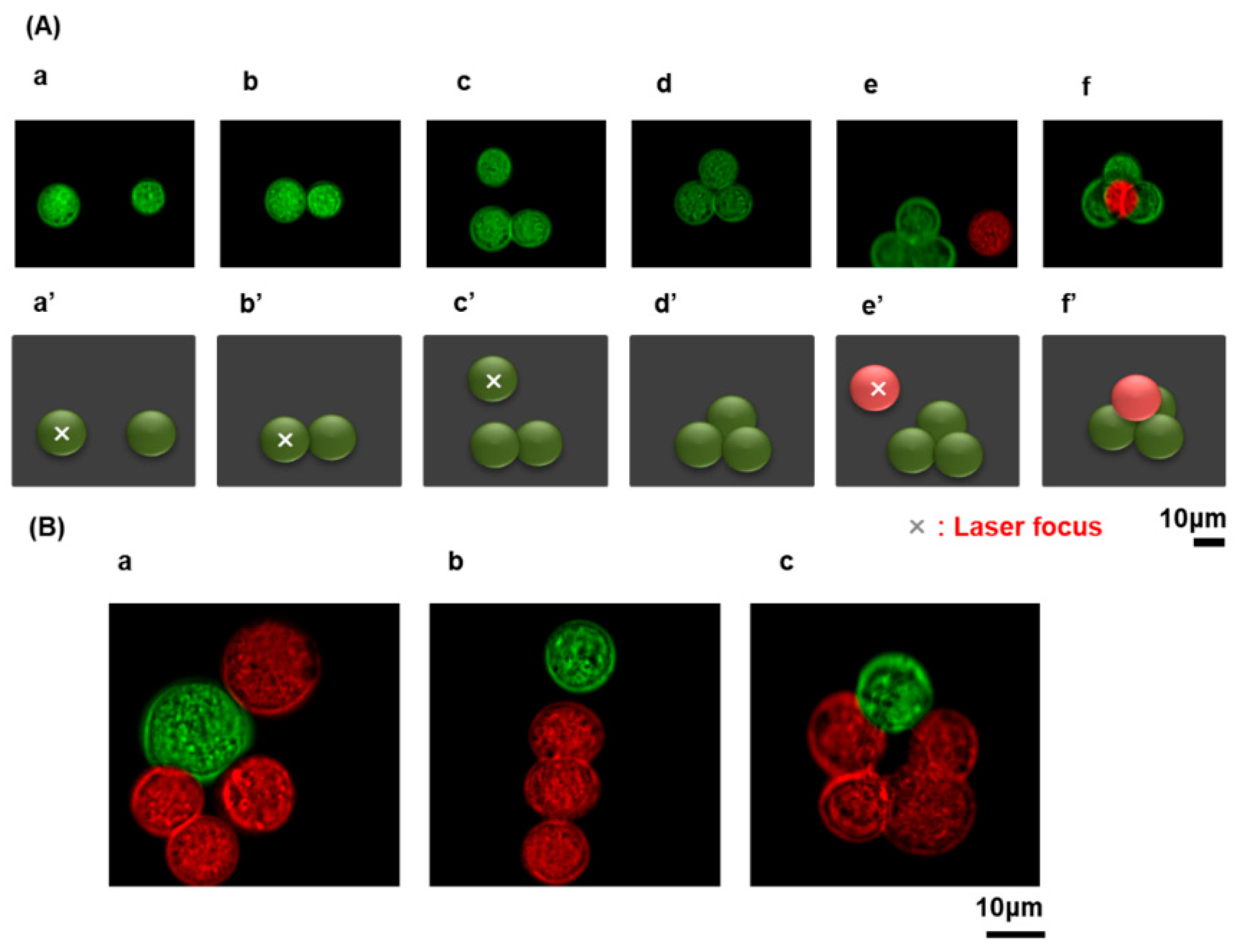