Synthesis of Metallic Nanocrystals: From Noble Metals to Base Metals

2.1. Fluorescent Analysis of Self-Assembling of Polymer Cross-Linkers in a Solution

The self-assemblies of polymer cross-linkers in a pre-gelled solution were investigated using a pyrene probe. [14,15]. The pyrene (Sigma, Peabody, MA, USA) was dissolved in acetone to prepare a stock solution with a concentration of 6.0 × 10−4 M. Polymer cross-linker pre-gelled solutions were prepared in DI (deionized) water (2 mL) by poly(ethylene glycol) diacrylate of Mn 575 g/mol (PEGDA-575, Sigma) and Mw 3400 g/mol (PEGDA-3400, Sigma), respectively. In parallel, acrylate group-free poly(ethylene glycol) of Mn 3350 g/mol (PEGdiol, Sigma) were dissolved in DI water as a control. Then, the pyrene solution was dropped into the polymer solutions with varying polymer concentrations. The mixture of the polymer solution and pyrene was sonicated for 10 min to ensure dispersion of pyrene in the polymer solution. The mixture was further incubated at room temperature for at least 12 h in the dark, so the pyrene was preferentially associated with hydrophobic domains of polymers. The mixture loaded in a quartz cuvette was excited at a wavelength of 330 nm and a resulting emission spectrum was obtained using photo luminescence (QM40, Photon Technology International, HORIBA, Japan). The band-width was adjusted to 2.0 nm for both excitation and emission.

Pre-gelled solutions were prepared by mixing 10 wt % PEGDA-575, which has a hydrophilic property and poly(propylene glycol) methacrylate (PPGMA, Mn of 375 g/mol, Sigma), acting hydrophobic chain, by increasing of mass fraction under fixed total polymer concentration, 10 wt %. The PEGDA was dissolved in DI water at 40 wt % stock solution, and PPGMA was dissolved in dimethyl sulfoxide (DMSO, Sigma, Peabody, MA, USA) at 20 wt % stock solution. The photo-initiator, 2-hydroxy-4′-(2-hydroxyethoxy)-2-methylpropiophenone (Irgacure 2959, Sigma) was dissolved in DMSO at 10 wt % stock solution and added to the 1 mL pre-gelled solution to form 0.2 wt % as the final concentration. First, the 1 mL of pre-gelled solution mixed by vortex mixer. Second the mixed pre-gelled solution was cast between glass plates with spacer of 1 mm of thickness. Then, the cast pre-gelled solution was exposed by UV lamp (365 nm, VL-4.LC, VILBER LOURMAT, France) for gelation about 10 min, after then, the gel was punched with 8 mm diameter. Gel disks were immersed in DI water to remove unreacted hydrophilic residuals and then, subsequently immersed in DMSO to residual hydrophobic polymers in the cross-linked gel disk. Finally, gel disk was immerged to exchange DMSO to DI water and further incubated in DI water for 24 h before characterizations described below.

The swelling ratio of the hydrogel at equilibrium was determined by measuring the weight of the hydrated gel and that of the dried gel. The hydrogels were immersed in DI water at room temperature and for 24 h to ensure the hydrogels were fully hydrated [16]. The degree of swelling (Q), defined as the reciprocal of the volume fraction of a polymer in a hydrogel (v2), was calculated from the following Equation (1), where ρs is the density of water, ρp is the density of polymer and Qm is the swelling ratio, the mass ratio of swelled gel to the dried gel.
The average pore size (ξ) of hydrogel was calculated from the polymer volume fraction (v2,s) and the unperturbed mean-square end-to-end distance of the monomer unit (ro−2) using Equations (2) and (3): where is the average value of the bond length between C–C and C–O bonds in the repeatable unit of PEG [–O–CH2–CH2–], which is taken as 1.46 ; Mc is the average molecular mass between cross-links in the network; Mr is the molecular mass of the PEG repeating unit; n is the number of repeat unit, which is taken as 7 (PEGDA Mn of 575 g/mol) and C is the characteristic ratio for poly(ethylene glycol), which is taken here as 4 [17].
The inner micro-structures of the hydrophobically-modified hydrogels were analyzed by SEM (FE-Scanning electron microscope, JEOL-7001F, JEOL Ltd., Tokyo, Japan) with an acceleration voltage of 5 kV. The hydrogels were lyophilized and covered with a platinum (Pt) layer produced by a vapor deposition. Values of the water contact angle (θw) on the surfaces of the hydrogels were measured by depositing a drop of water (4.0 μL) under atmospheric condition with DSA100 (KRÜSS, Hamburg, Germany). The contact angle was measured immediately after placing the water drop on the hydrogel surface [18]. Bovine serum albumin (BSA, Sigma) was also used as a model protein to evaluate the protein release rate from the hydrophobically-modified hydrogels [19]. The PEGDA and PPGMA stock solution were dissolved in DI water to prepare the pre-gelled solution at 10 wt %. The pre-gelled solution was mixed with BSA and photo-initiator, the mixture immediately cast between glass plates with spacers of 1 mm thickness, and exposed by UV lamp about 10 min. After 10 min, gel disks with a diameter of 8 mm were punched. Each hydrogels containing BSA was suspended in 400 μL of Dulbecco’s phosphate buffered saline (PBS, biowest) and incubated at 37 °C. At a designated time point, each PBS immersed hydrogel containing BSA was removed. Then, hydrogels were filled with fresh PBS again thereby keeping the sink condition. BSA amount released from the hydrogel was quantitatively measured using PierceTM BCA protein assay kit (Thermo Scientific, USA) according to the manufacturer’s instructions. The absorbance was measured at 562 nm using ELISA (Multiskan GO, Thermo Scientific, USA). The BSA release profile obtained was fitted to the Ritger-Peppas equation [20]. where Mt is the cumulative amount of protein released at the time, t; M∞ is the total amount of protein in the hydrogels; k is the kinetic rate constant and n is the exponent related to the release mechanism.

3.1. Analysis of Self-Assembling of Polymer Cross-Linkers in a Solution

3.2. Effects of the Hydrophobic Domains Incorporated into a Hydrogel

The hydrophobically-modified hydrogels were prepared via in situ radical polymerization of self-assembled PEGDAs and PPGMAs with varying mass fraction. As pointed out above, the concentration of polymer cross-linkers used to form a hydrogel was higher than the CACs of cross-linkers as shown in Figure 2c. Figure 3 showed that in general, the degree of swelling (Q) of hydrogels increased as the concentration of pure PEGDAs decreased due to the increase of average pore-size (ξ) of hydrogel. For example, 2.31 nm of ξ in 10 wt % of PEGDAs increases to 2.48 nm of that in 8.0 wt % of PEGDAs as shown in Table 1, calculated using the Equation (1). However, interestingly, in the case of the hydrophobically-modified hydrogels, the Q of hydrogel decreased with increasing PPGMA portion from 0 wt % to 0.5 wt %, despite of the decrease of PEGDA concentration and then, the Q was increased with increasing PPGMA from 0.5 wt % to 2.0 wt %. These results indicated that PPGMA regulates the degree of swelling of the hydrogel at a mass fraction of less than 0.5 wt % of PPGMA as a hydrophobic repulsion. In contrast, above 0.5 wt % of the mass fraction of PPGMAs, the decreased mass fraction of PEGDAs had a predominant role to the Q of hydrogel. Note that PPGMAs are not related to regulate the ξ of hydrogel, because the PPGMA molecule has a single acrylate group, which is not acting as a cross-linker. However, the ξ of hydrogel from 0 wt % to 0.5 wt % of PPGMAs was decreased despite of the decrease of PEGDAs’ concentration. As addressed above, this result is attributed to hydrophobic repulsion by PPGMA.
The inner micro-structures of hydrophobically-modified hydrogels (HMHs) were examined with freeze-dried gels using SEM. Figure 4 shows the images of hydrogels depending on the introduced amounts of PPGMAs. Incorporation of the hydrophobic PPGMAs into the hydrogel made minimal difference in the 3D networked microstructures as compared to the pure PEGDA hydrogel (HMH-1; Figure 4a,b). Therefore, the pore-size of the hydrogel was minimally affected by incorporating the hydrophobic chains. However, the hydrogel with 2.0 wt % of PPGMAs (HMH-4) exhibited relatively large hydrophobic micro-domains (Figure 4c-1,c-2). This result implicates that hydrophilic PEGDA and hydrophobic PPGMA molecules were separated into a two phases in the pre-gelled solution. As confirmed by the fluorescence assay, the PEGDAs, building blocks of a hydrogel are self-assembled with hydrophobic cores, which can be used as micro-domains for incorporating PPGMA. However, incorporating of PPGMAs over a certain amount that is likely the loading capacity of the self-assemblies of PEGDAs resulted in the phase separation. Accordingly, the water contact angles (θw) measured at the surface of hydrogel increased with increasing of incorporating PPGMAs but, the increase in the water contact angle has limited in HMH-4, due to the irregular arrangements of hydrophobic chains (Figure 4c-3). As a result, the hydrophobicity of a hydrogel could be tuned in a controlled manner by incorporating hydrophobic molecules using self-assembled domains of polymer cross-linkers.
BSA was encapsulated into the HMHs using PEGDA-3400 to evaluate the effects of the hydrophobic motifs on the protein release rate (Table 2). The release rate of BSA from the HMH gel was quantified by measuring the amount of BSA released into the incubation media on a daily basis over ten days (Figure 5). Increasing the hydrophobicity from 0 wt % to 2 wt % of PPGDAs significantly decreased the amount of BSA initially released from the HMH gels (Figure 5a). The cumulative mass fraction of BSA released from HMHs over 12 h, Mt/M∞, was fitted with the Ritger-Peppas equation to calculate a kinetic rate constant (k; Figure 5b). The k of the HMHs decreased by 30% as PPGMAs was increased from 0 wt % to 2 wt %. The hydrogels incorporated with hydrophobic motifs would be useful to study for releasing and secreting of soluble and insoluble factors in the cellular microenvironment. In summary, the self-assemblies formed with polymer cross-linkers in a pre-gelled solution could be a place of incorporation of hydrophobic motifs regularly and stably in thermodynamics upon the critical range. However, above this critical point, the self-assemblies would not provide enough room for the hydrophobic parts, so that the phase will be separated and consequently irregular hydrophobic macro-domains in size and arrangement will be generated.

Taken together, this study presents a new strategy to incorporate hydrophobic domains regularly in a hydrogel by self-assembling of polymer cross-linkers, building blocks of a hydrogel. Self-assemblies between polymer cross-linkers were examined as micro-domains to incorporate hydrophobic motifs in a hydrogel. The self-assembled structures in a pre-gelled solution were confirmed with the fluorescence analysis and the hydrophobicity of a hydrogel could be tuned by incorporating the motifs in a controlled manner. Overall, the results of this study would greatly serve to tuning performance of a wide array of hydrophobically-modified hydrogels in drug delivery, cell therapies and tissue engineering. 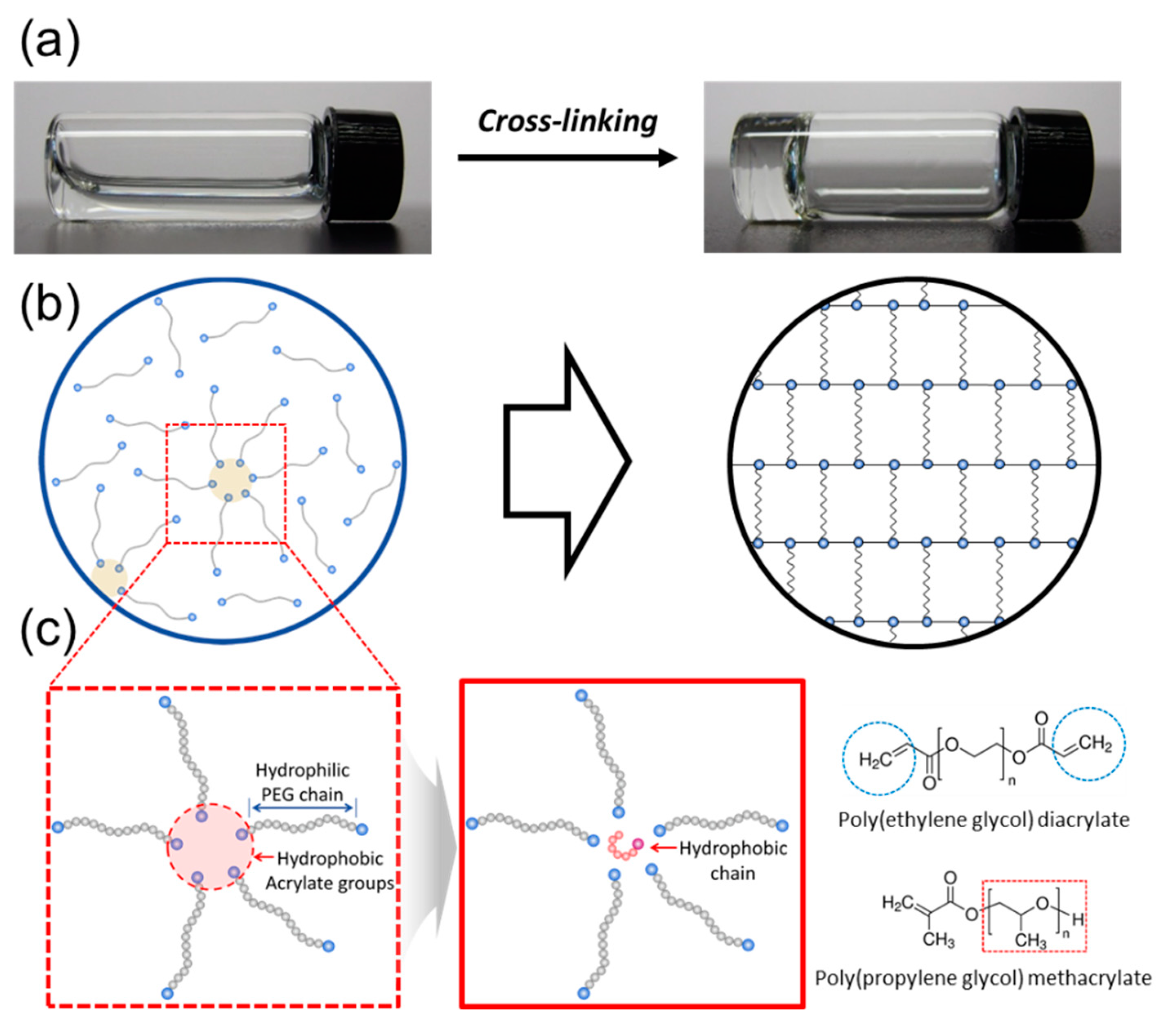 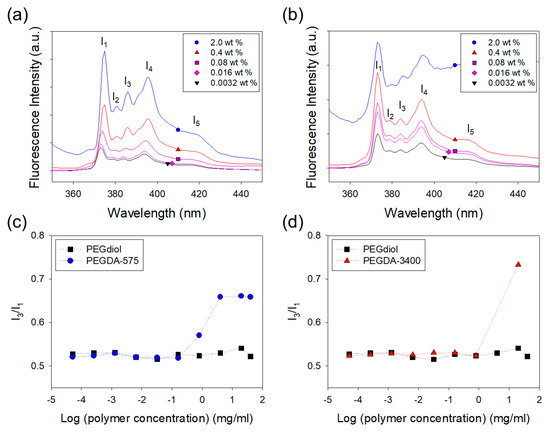 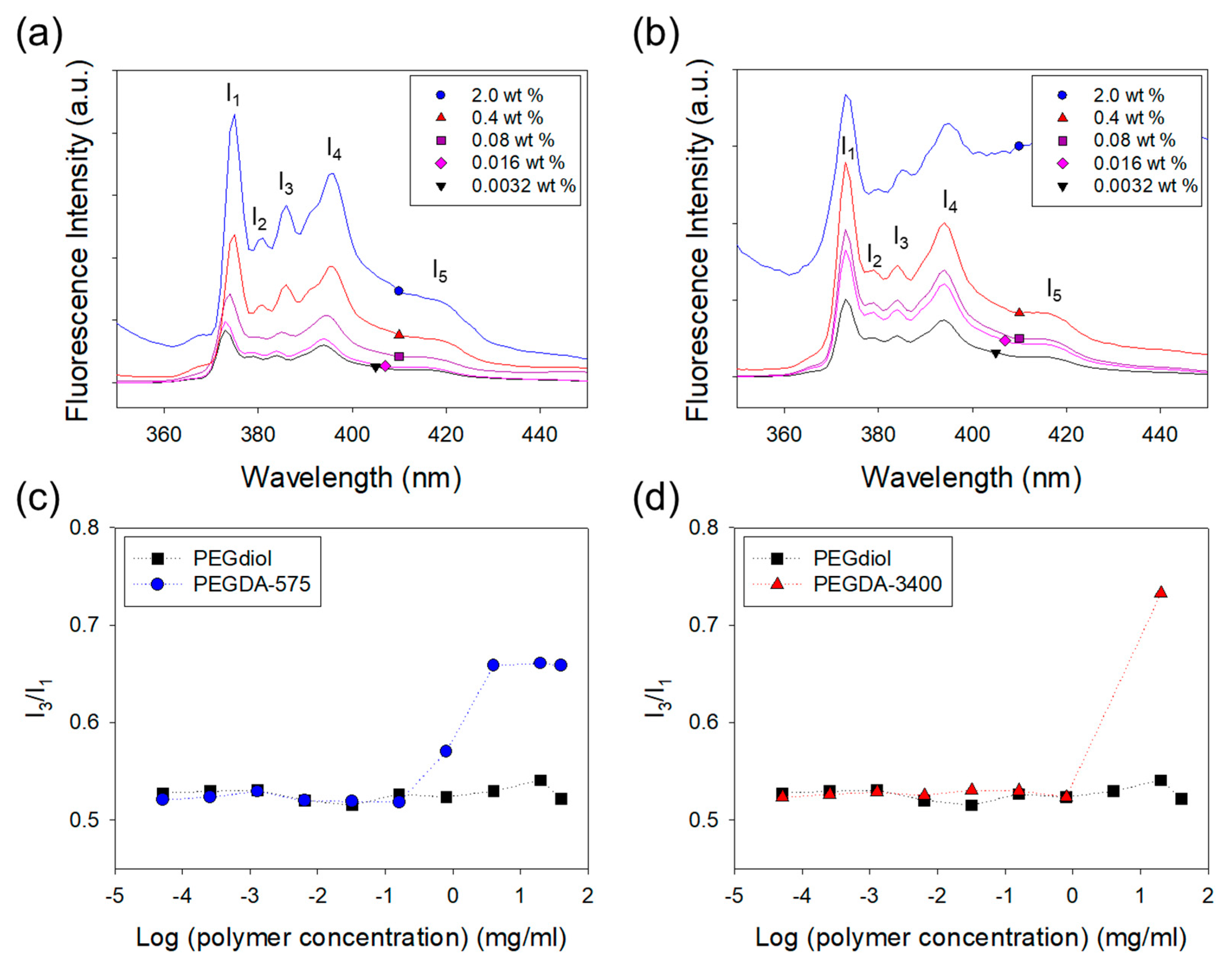 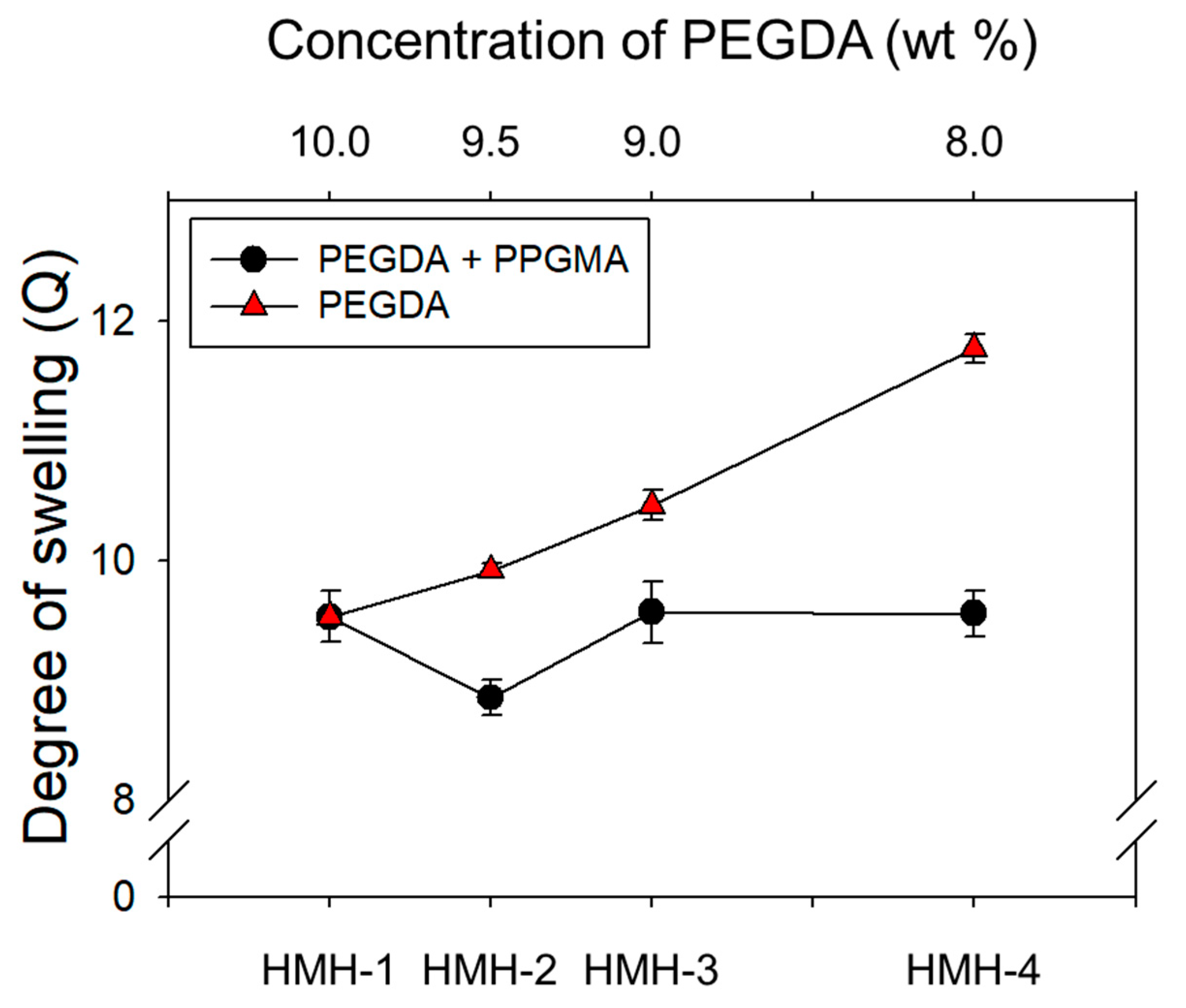 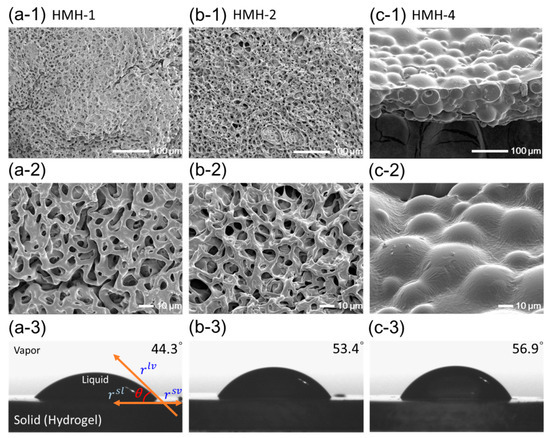 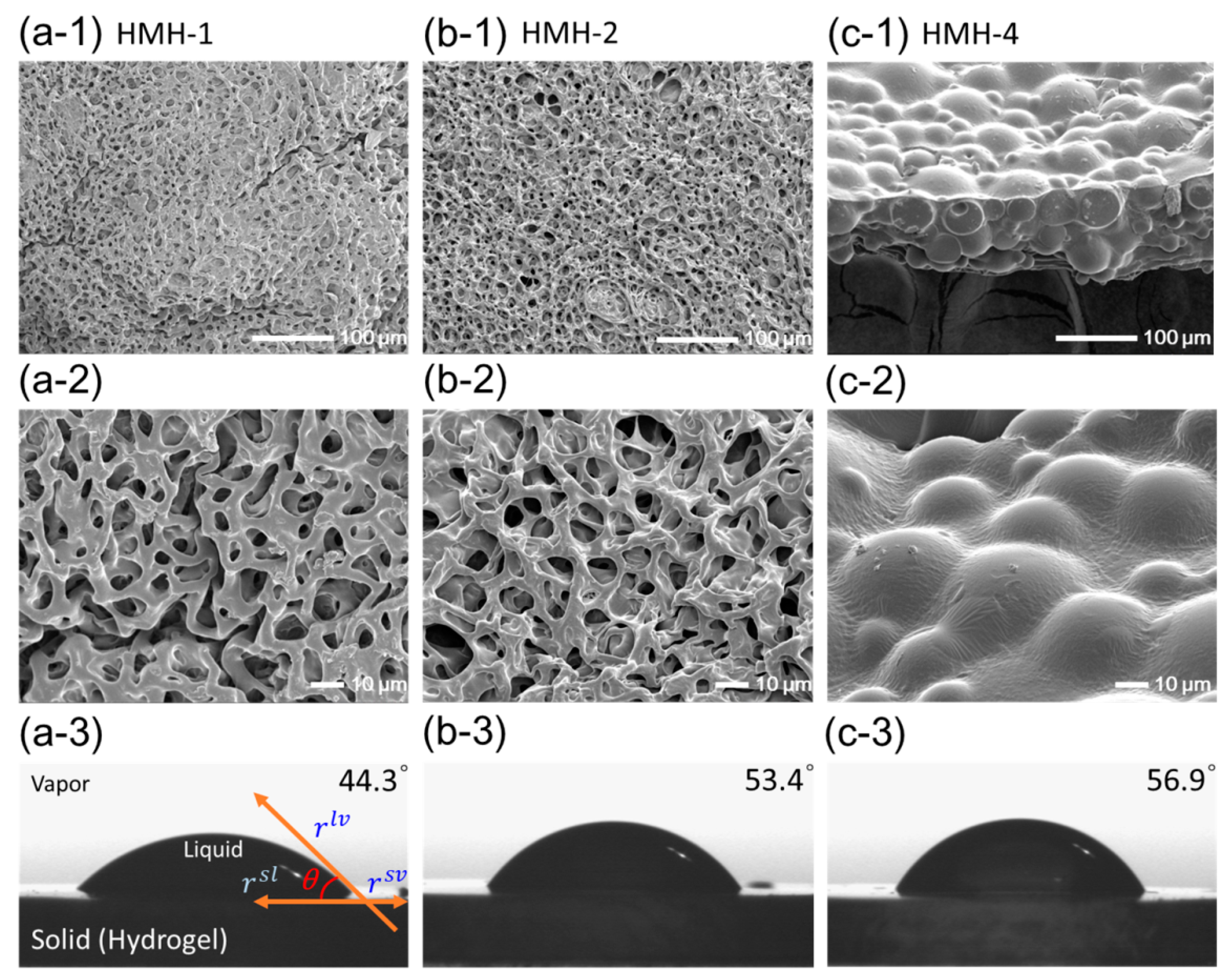