Polyvinyl alcohol (PVA) is a highly hydrophilic, biocompatible, and biodegradable polymer [1,2,3] with good chemical stability and mass transfer properties [4,5,6]. PVA nanofibers can be used as wound dressings, drug carriers, biomedical materials, and matrices for tissue regeneration [7,8,9]. The drawback of PVA nanofiber films is with respect to their low mechanical properties. The addition of nanofillers can improve mechanical, electrical, thermal, and optical properties. For example, graphene (GR) is one commonly used nanofiller [10,11] capable of increasing the mechanical properties considerably and retaining the intrinsic biocompatibility, which massively strengthens the polymer matrix composites [12,13]. Graphene also features a high specific surface area, surface conductivity, and transmission capacity, and even accelerates the transmission of drugs and target cells [14,15,16,17,18,19].
Nanofibers have a tremendously high specific surface area and mass ratio, both of which are inversely proportional to the diameter, and can achieve a greater diameter ratio and porosity [20,21,22]. Hence, nanofibers are commonly seen in biomedical, environmental, and optoelectronic applications [23]. In addition to the micro/nano processing methods including photolithography, electron beam exposure, and ion beam cutting, nanofibers can also be produced through vapor deposition methods such as the template method, self-assembly solution growth method, nanoimprinting, and electrospun [24,25]. By contrast, the electrospun technique is a newer and more efficient, low-cost, non-polluting method that has been proven to be the most effective and direct technique. Electrospun nanofibers, which have been widely used due to their efficient properties [26], can be produced by needleless electrospun and needle electrospun.
Needleless electrospun avoids clogged needles and magnificently increases the spinning efficiency and the yields of nanofibers [27]. The process of needleless electrospun has undergone development. In addition to the magnetic fluid auxiliary electrospun [28] and bubble electrospun [29], other needleless electrospun methods use different spinnerets such as cylinders [30], conical coils [31], pyramids [32], disk nozzles, and spirals [33,34]. The drawback is that the jet flow is directly drawn from the free surface of the electrospun liquid to form nanofibers, and the unpredictable process difficult to manage [35]. Changing the spinning electrode is one measure to secure the spinning process to a certain extent. For example, Niu et al. invented a spinning electrode in a spiral line and obtained a more powerful and more even electric field surrounding the jet than that of cylinder and disk nozzles electrodes. The nanofibers were of better quality and could be produced in greater quantity [33,34]. The advanced study by Huang et al. produced GR-PVA nanofibers using the electrospun technique, and the microscopic structure of graphene nanosheets (GNS)/PVA nanofibers was observed. The average diameter of the nanofibers was 371 nm [7]. Golafshan et al. investigated the graphene/poly (vinyl alcohol)/sodium alginate (Gr-AP) fibrous scaffolds for engineering neural constructs and found that the scaffolds that were composed of 1 wt % Gr-AP had an average nanofiber diameter of 296 ± 40 nm [36].
Nevertheless, there are relatively fewer studies incorporating needleless electrospun with the preparation of PVA/GR nanofiber films. In this study, the custom-made copper wires are used as the spinning electrode for the electrospun of the PVA/GR nanofiber films with a finer diameter, and the nanofiber films are then evaluated in terms of the potential of mass production. The influences of viscosity and conductivity of the PVA/GR mixtures on the morphology and diameter as well as the influence of the content of graphene on the wettability, thermal stability, electric conduction, and electromagnetic shielding performance of the PVA/GR nanofiber films are evaluated.

Graphene (0, 0.01, 0.1, 0.25, 0.5, 1, and 2 wt %) was added to 1 wt % SDS with ultrasonic treatment for 3 h, after which PVA powders were added with magnetic stirring at 90 °C for 2 h and ultrasonic treatment for 3 h, forming different PVA/GR mixtures. Based on our previous study on the spinnability of PVA using a linear electrode, the PVA solution had a specified concentration of 7.5 wt % [37]. The electric conductivity and viscosity of the PVA/GR mixture were measured using a portable multiple parameter tester (ST3100MZH/F, OHAUS, Pine Brook, NJ, USA) and a digital viscosity meter (Bangxi Instrument Technology, Shanghai, China). Afterwards, the PVA/GR mixtures underwent needleless electrospun into nanofiber films at 25 °C with a humidity of 23% using a linear electrospun device which included a linear spinning head, a high-voltage power supply, and a grounded mesh collector (see Figure 1). The linear nozzle had a length of 15 cm and a diameter of 0.8 mm. The rate of the linear spinning head was 72 r/h, with a spinning voltage of 70 kV and a spinning distance of 30 cm [37]. The pure PVA nanofiber films represented the control group and the PVA/GR nanofiber films the experimental group. Both the control group and the experimental group were adhered with aluminum foil for electromagnetic interference shielding effectiveness (EMSE) measurement only.

Scanning electron microscopy (SEM, TM3030, HITACHI, Tokyo, Japan) was used to observe the morphology of the nanofibers. A bundle of 100 nanofibers was used to compute the average diameter. A surface contact angle instrument (JC2000DM, Shanghai Zhongchen Digital Technic Apparatus, Shanghai, China) and deionized water were used to measure the surface contact angle at 25 °C every 10 seconds, thereby examining the wettability of the PVA/GR nanofiber films. The thermogravimetric (TG) measurement was conducted using a thermogravimetric analyzer (TG 209F3, NETZSCH, Bavaria, Germany) with nitrogen gas at a flow rate of 60 mL/min. The relative mass loss of the samples was recorded from 25 °C to 700 °C with a heating rate of 10 °C/ min, thereby characterizing the thermal stability of the PVA/GR nanofiber films. A surface resistance instrument (RT-1000, OHM-STAT, Static Solutions Inc., Hudson, NY, USA) was used to measure the surface resistivity of the PVA/GR nanofiber films as specified in JIS L1094. The instrument equipped a 5-pound weight ensured that the two parallel electrodes were in good contact with the surface of the sample. Twenty samples for each specification were taken for the mean. The EMSE of PVA/GR nanofiber films shielding electromagnetic waves at frequencies between 0.1 MHz and 1.5 GHz was measured using an EMSE tester (EM-2107A, TS RF Instrument, Taoyuan, Taiwan) as specified in ASTM D4935. The cylinder samples had a diameter of 80 mm.

Figure 2 shows the SEM images and diameter distribution of the PVA/GR nanofiber films. The morphology and diameter distribution of the nanofibers are observed and measured in order to examine the influence of the content of graphene. The SEM images in Figure 2a–g show that increasing graphene is also detrimental to the spinnability and evenness of the nanofibers in addition to providing a rough surface. The adhesion between fibers is enhanced with more graphene, and some nanofibers are even coalesced. A content of graphene of 0.5 wt % leads to the presence of bead-shaped fibers (Figure 2f). Moreover, the number of bead-shaped nanofibers increases when the PVA/GR mixture is composed of 1 wt % graphene (Figure 2g).
Figure 3 shows the diameter distribution of PVA/GR nanofibers. The PVA/GR mixtures are made of 7.5 wt % of PVA solution and 0.01, 0.1, 0.25, 0.5, or 1 wt % graphene. A greater proportion of graphene decreases the diameter of the nanofibers. In particular, when graphene is of 0.1 wt %, the diameter is 120 nm, which is 61% lower than that of pure PVA nanofibers. It is also 67% lower than the diameter (371 nm) of the graphene nanosheets (GNS) /PVA nanofibers proposed by Huang et al. [7]. Graphene is a highly conductive filler, and greater quantities of graphene have a positive influence on the static electricity which strengthens the traction onto the droplets and thus results in finer nanofibers [38,39]. Although the viscosity of PVA/GR mixture increases as a result of the increasing graphene, the viscosity has less influence than the electric conductivity of the mixture. As a result, the nanofibers have a greater fineness when the PVA/GR mixture consists of more graphene [7].

Figure 4 shows that the surface contact angle of pure PVA nanofiber films is 42.66°, which then gradually decreases with the increasing standing time. PVA has considerable hydrophilic -OH groups, which results in a high affinity with water molecules and provides nanofibers with greater moisture absorption capacity [41,42]. The surface contact angle diminishes from 42° to 10° as a result of increasing graphene. This decreasing trend conforms well to that related to graphene oxide content as proposed by Yang et al. and Da et al. [43,44]. Namely, when composed of more graphene, the nanofiber films have greater wettability. Based on Figure 3, the diameter of nanofibers is inversely proportional to the content of graphene. The finer nanofibers mean that the nanofiber films have a high porosity, and thus greater wettability. In addition, graphene is distributed in the interior and surface of the fiber film, and the addition of graphene increases the distance between the fibers, which facilitates the penetration of water into the membrane [43]. Moreover, the addition of graphene also renders the nanofibers with a rough surface. According to the Wenzel Equation (1), the relationship between the wetting angle of a rough interface (i.e., θ*) and a wetting angle (i.e., θ) can be presented as in Equation (1). When r > 1 and the angle is smaller than 90°, the nanofibers have a rougher surface and a smaller surface contact angle [41,42].

In this study, the concepts and designs for the experiment were supervised by J.-H.L. and C.-W.L. Experiments and data processing were conducted by M.Y. Text composition and results analysis were performed by T.-T.L. The experimental results were examined by Q.J. and H.-K.P.

This research is supported by the Open Project Program of Fujian Key Laboratory of Novel Functional Fibers and Materials (Minjiang University), China (No. FKLTFM 1704 and FKLTFM1722), the Opening Project of Green Dyeing and Finishing Engineering Research Center of Fujian University (2017002B and 2017001A) and the Program for Innovative Research Team at the University of Tianjin (TD13-5043). 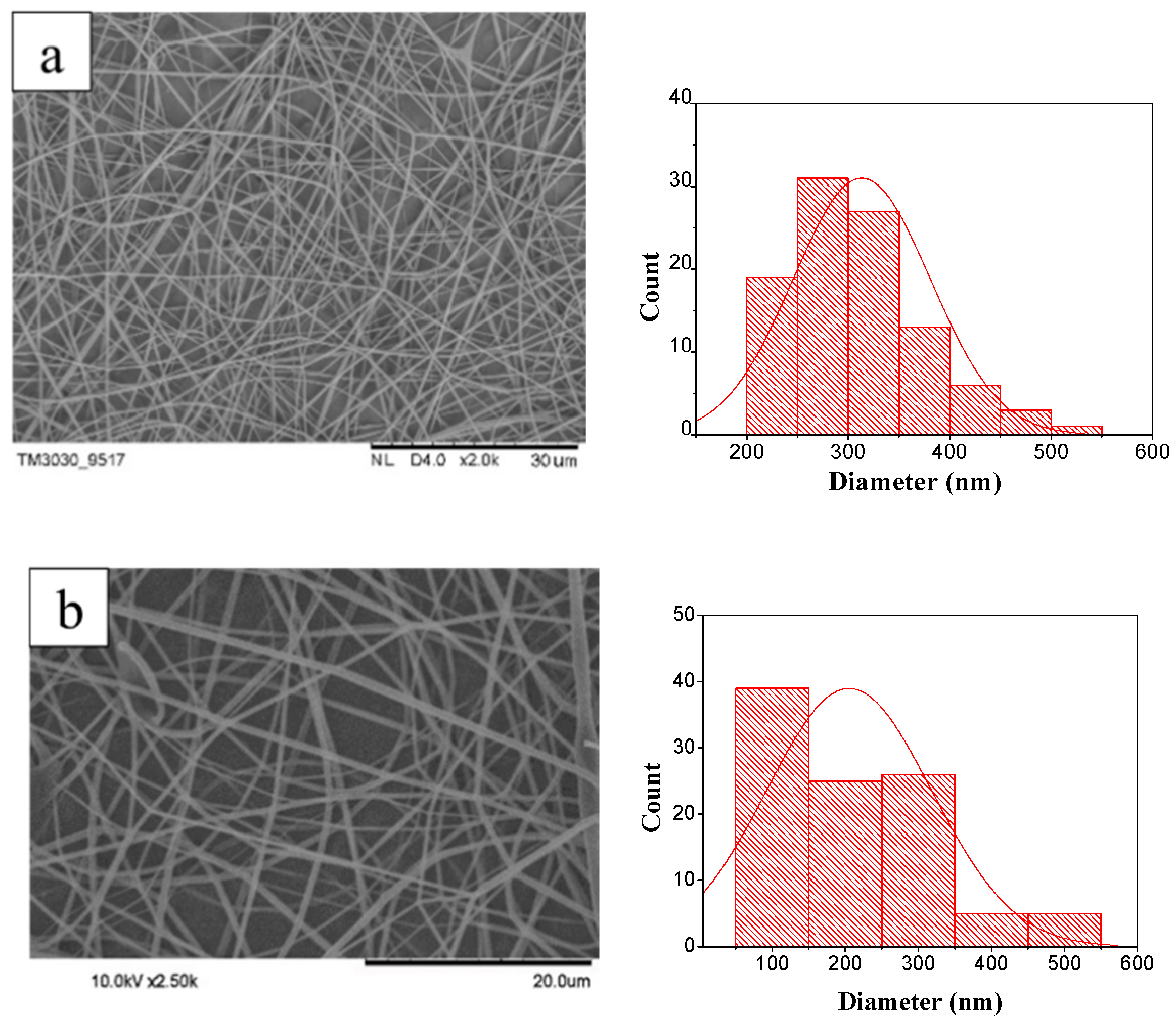 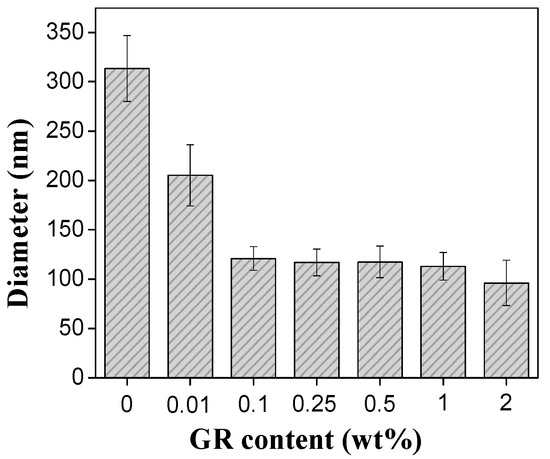 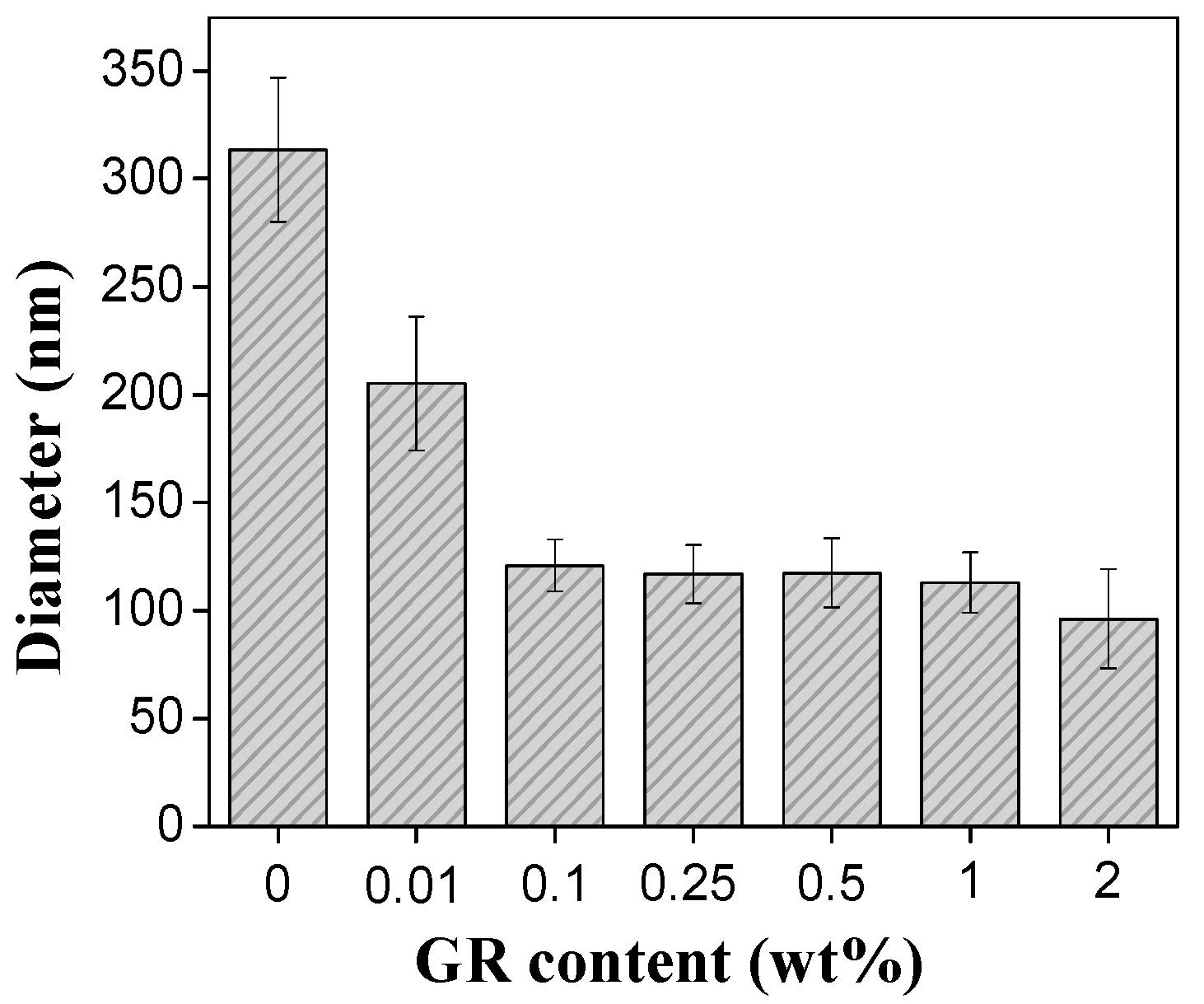 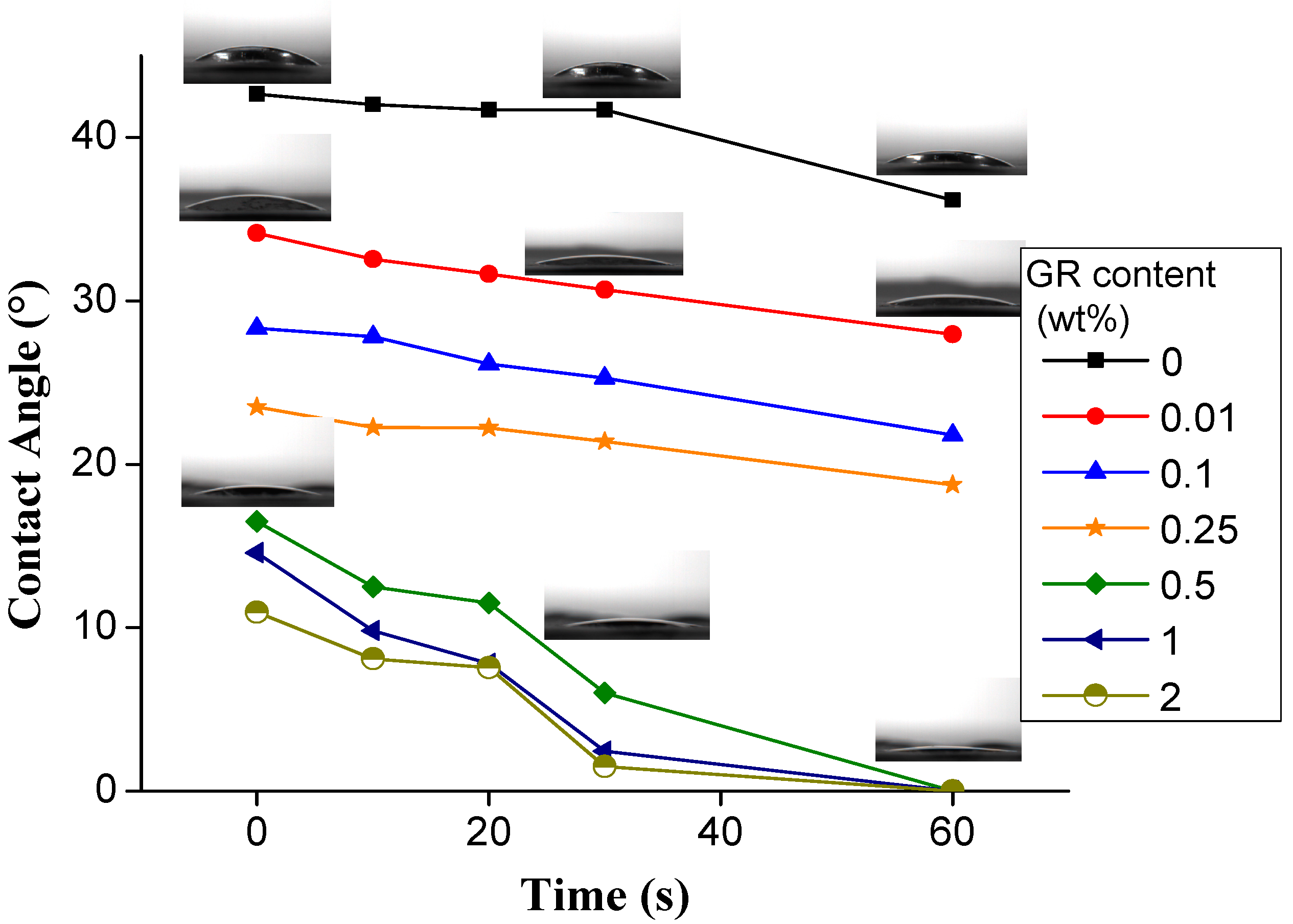 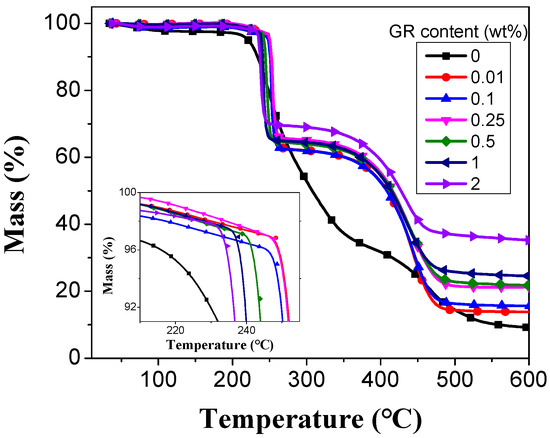 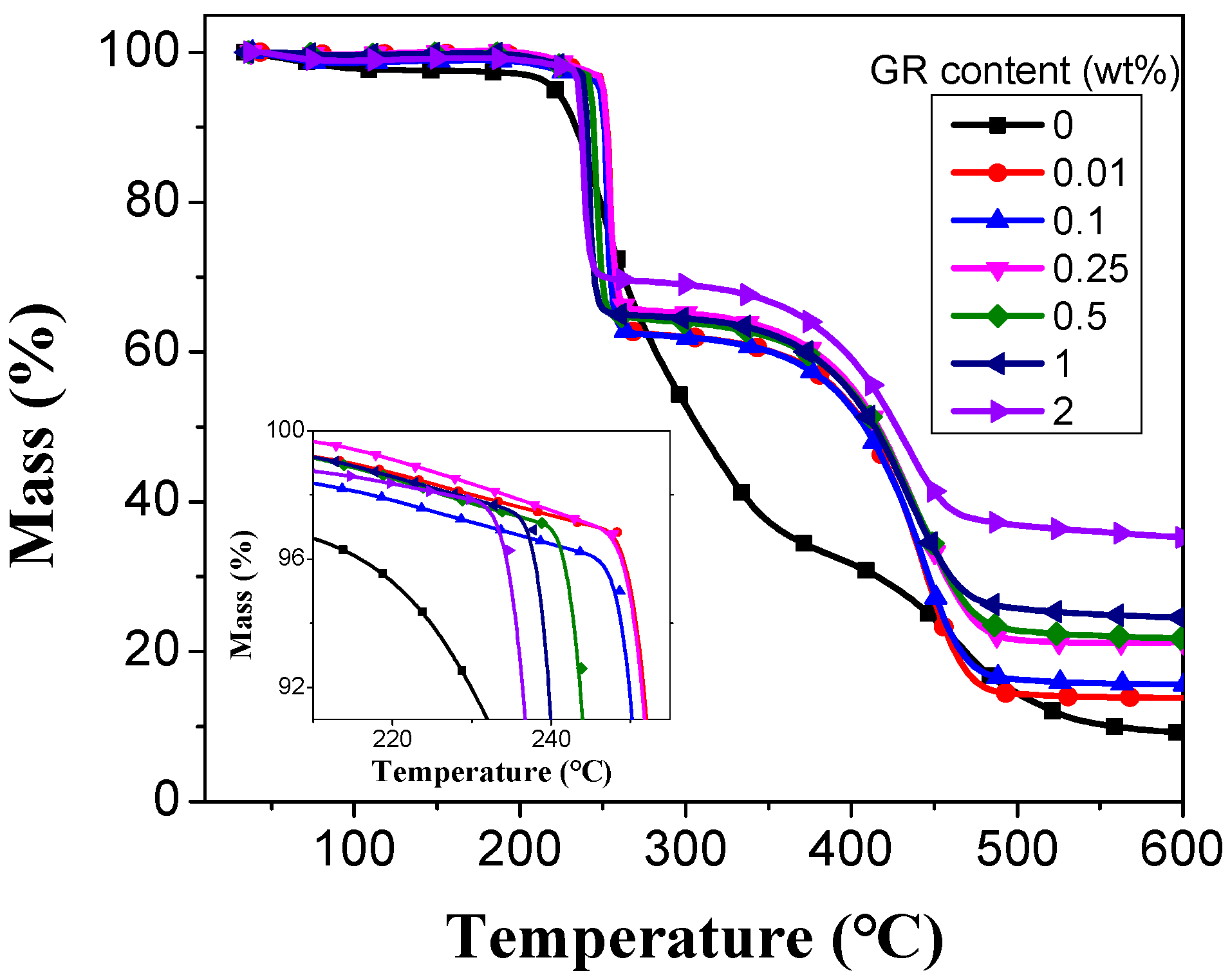 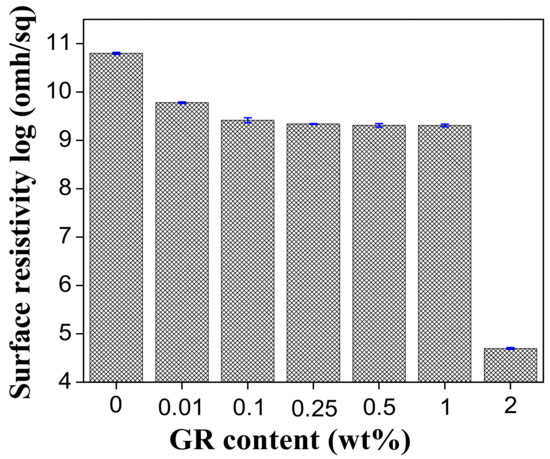 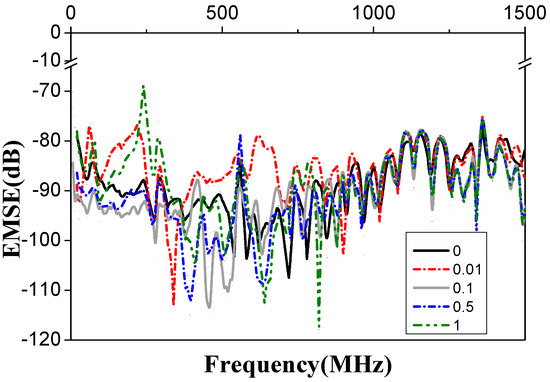 Table 2. TG results of PVA/graphene (GR) nanofiber films.
Table 2. TG results of PVA/graphene (GR) nanofiber films.
© 2018 by the authors. Licensee MDPI, Basel, Switzerland. This article is an open access article distributed under the terms and conditions of the Creative Commons Attribution (CC BY) license (http://creativecommons.org/licenses/by/4.0/).
We use cookies on our website to ensure you get the best experience. Read more about our cookies here.
Accept
We have just recently launched a new version of our website. Help us to further improve by taking part in this short 5 minute survey here. here.
Never show this again