Recent Evidence on Bioactive Glass Antimicrobial and Antibiofilm Activity: A Mini-Review
Next Article in Special Issue

Optical Aggregation of Gold Nanoparticles for SERS Detection of Proteins and Toxins in Liquid Environment: Towards Ultrasensitive and Selective Detection
Previous Article in Journal

Surface-enhanced Raman spectroscopy (SERS) is known as a molecular-specific and highly sensitive method. In order to enable the routine application of SERS, powerful SERS substrates are of great importance. Within this manuscript, a TopUp SERS substrate is introduced which is fabricated by a top-down process based on microstructuring as well as a bottom-up generation of silver nanostructures. The Raman signal of the support material acts as an internal standard in order to improve the quantification capabilities. The analyte molecule coverage of sulfamethoxazole on the surface of the nanostructures is characterized by the SERS signal evolution fitted by a Langmuir–Freundlich isotherm.
Keywords: SERS; TopUp SERS substrate; sulfamethoxazole; Langmuir–Freundlich isotherm SERS; TopUp SERS substrate; sulfamethoxazole; Langmuir–Freundlich isotherm

Surface-enhanced Raman spectroscopy (SERS) combines the fingerprint specificity of Raman spectroscopy with potential single-molecule sensitivity due to the interaction of molecules with plasmonic metal nanostructures [1,2,3,4]. Thus, analyte molecules can be detected achieving molecular information in trace levels using SERS-based detection schemes. A broad variety of application fields in bioanalytics and biomedicine are known for SERS and have been well summarized by recently published review articles [5,6,7]. However, despite this huge potential of SERS in (bio)analytics, the technique is not accepted in routine analytics, which is often associated with the lack of reproducibility of the applied SERS substrates. To address this obstacle, a number of fabrication strategies are available claiming the preparation of ‘reproducible SERS substrate’ [8,9,10,11,12,13,14]. Additionally, SERS is combined with microfluidic approaches in order to allow for comparable and reproducible measuring conditions in quantitative detection schemes [15,16,17].
In order to address variations in laser intensity, focus, and setup alignment, an internal standard for signal intensity normalization is necessary for reliable quantitative results [18]. For SERS, special demands on the standard method are needed, since not only the aforementioned issues have to be addressed but also the fluctuating enhancement of the SERS signal, resulting from the heterogeneous distribution of the local electromagnetic field across the nanostructured surface. Furthermore, the Raman signal of the internal standard has to be detectable without suppressing the SERS signal of the molecule of interest. Within the literature, different standardizing strategies are introduced and discussed. As an example, for the detection of pharmaceuticals in tablets based on their Raman signal, the tablet matrix was used as an internal standard [18]. In the case of SERS, the application of the Raman signal of the matrix molecules as an internal standard might be disadvantageous due to the competition for binding sites on the metallic surface [19]. Therefore, substances, such as thiocyanate with a marker mode around 2200 cm−1 (C≡N stretching vibration), which have SERS signals in the silent spectral region are applied as an internal standard [20].
To address local fluctuations in SERS intensity, molecules competing with the analyte for free binding sites on the nanoparticle surface are used. A prominent standardizing method is the addition of isotopes to the investigated sample [21], which show the same chemical behavior as the analyte molecule and, therefore, the same signal enhancement properties are expected. The drawback of this method is that the two substances compete for free binding sites on the nanostructured surface and their Raman marker modes might overlap. In another study where colloidal nanoparticles were used, the internal standard was incorporated within the metallic multilayer. In this way, a reasonable Raman signal intensity of the internal standard could be obtained without blocking the binding sites on the external surface of the particles [22]. As an example, a gold core is modified with a Raman reporter layer, e.g., aminothiophenol, and later covered by a silver shell which acts as the enhancing material for the analyte molecules.
In the case of SERS substrates with high structural reproducibility across the surface, less SERS signal fluctuations are expected. Additionally, by averaging the SERS signal across the nanostructured surface, small fluctuations are levelled out. Thus, an internal standard to correct on the local SERS intensity fluctuations is not needed. Using the example of planar substrates fabricated by nanosphere lithography (NSL), the polystyrene signal originating from the preparation process [23] or the silicon from the substrate basis [24] can be utilized as an internal standard to address variations in laser intensity, focus, and setup alignment.
Within this manuscript, we introduce the application of silicon as an internal standard for our recently developed TopUp substrates [25]. Here, silicon is used as supporting material for the SERS active substrate. This TopUp substrate successfully combines the benefits of a top-down structure with the fast and easy preparation of a bottom-up crystalline silver nanostructure. Moreover, the SERS signal distribution is highly homogenous, allowing for quantitative measurements. Due to the presence of silicon as supporting material, both the SERS signal from the analyte molecule and the Raman signal of silicon are recorded simultaneously. The antibiotic sulfamethoxazole is applied for all investigations and the benefits brought by the internal standard are illustrated by the extended linear dynamic range. Finally, it is found that the SERS intensity profile follows a Langmuir–Freundlich isotherm.

The implantation of an internal standard was introduced by using TopUp nanostructures as SERS substrates. Here, the support material is silicon, which results in both the SERS fingerprint information of the analyte molecules and the Raman signal of silicon recorded simultaneously in one spectrum. Although the applied SERS substrates provide background information due to the residues from the fabrication via a bottom-up fabrication process, the analyte molecule sulfamethoxazole is detected within the relevant, sub-µM concentration range. Moreover, it is demonstrated that the linearity between 2 × 10−8 and 2 × 10−7 M is improved by normalizing the data points on the peak area of the 521 cm−1 Raman mode of silicon. Thus, the quantification potential is improved by the proposed normalization procedure. Finally, considering higher concentrations, the signal intensity evolution is fitted by a Langmuir–Freundlich isotherm which reflects the interaction behavior of the analyte molecules with the metallic surface, i.e., forming first a monolayer and, when all binding sites in the first layer are occupied, forming further layers, resulting in less SERS signal enhancement due to the evanescent character of the electromagnetic field generated on plasmonic nanostructures.

Sulfamethoxazole, hydroquinone, and silver acetate were purchased from Sigma-Aldrich (St. Louis, MI, USA) in the highest available purity. All resists and chemicals mentioned for the fabrication of the gold template structure were purchased from Allresist GmbH (Berlin, Germany).

The gold template structures were fabricated on waferscale by means of electron beam lithography, thermal evaporation, and lift-off techniques. As substrates, 4″ Si wafers are used. First, a two-layer e-beam resist system was spun onto the precleaned wafer. Such two-layer resists are commonly used for lift-off processes and consist of a 70 nm thick ARP617.03-resist on the bottom and a 150 nm ARP6200.09-resist on top. The ARP617 was tempered for 10 min at 200 °C on a hotplate, and the ARP6200 for 3 min at 150 °C. After spin-coating, the resist surface was additionally covered with a 10 nm gold film to avoid charging during the e-beam exposure. The e-beam exposure was performed using a Vistec SB350OS e-beam writer (50 keV). This shaped beam system is equipped with the unique Character Projection technique which allowed the fast quasi-parallel exposure of nanopatterns on large areas [40,41,42].
After the beam exposure, the resist was developed for 60 s in AR600-546 and 60 s in IBK/IPA = 1:3, rinsed in IPA (isopropanol), and dry spun afterwards. As an adhesion promoter, a layer of 3 nm Ti was evaporated, followed by 50 nm of gold on top of the resist pattern. The lift-off process was done in an AR600-71 bath for 12 h and the gold island template patterns were created. At the end, an oxygen plasma was applied to remove residual resist and to clean the surface.

The preparation protocol for the self-organized silver deposition on the gold template structure is described elsewhere [25]. Briefly, the gold template structure was incubated in a mixture consisting of 2 mM hydroquinone in citric buffer (pH 3.8) solution and an aqueous 2 mM silver acetate solution in the ratio 1:2. After 10 min the reduction of silver ions to crystalline silver was stopped by washing the substrates with high purity water. Finally, the as-prepared substrates were dried with compressed air. The created nanostructured surfaces are referred to as [email protected] substrates, since they combine top-down electron beam lithography with bottom-up fabrication of silver nanostructures on silicon wafers.

The scanning electron microscope (SEM) images were recorded by using a JEOL JSM-6700F microscope (JEOL (Germany) GmbH, Freising, Germany). The samples were investigated without any covering of the nanostructured surface.
The Raman and SERS measurements were performed using a confocal Raman microscope (alpha300, WITec, Ulm, Germany) equipped with a laser line at 488 nm. The Raman spectra of silicon were collected with a 100× objective (NA 0.8) and a laser power of 25 mW. The SERS signals were collected with a 10× objective (NA 0.25) and the laser power after the objective was 3 mW. To avoid sample burning, the measurements were carried out under wet conditions by incubating the substrate in the appropriate analyte solution with a layer of 0.4 cm of the analyte solution above the substrate. The SERS measurements were performed by recording 10 scans for each concentration with the following parameters: 2 points per line, 50 lines per scan, 60 × 60 µm2, and integration time of 0.5 s per spot. Thus, it is guaranteed to average over a large area to avoid SERS signal variations due to locally different enhancement properties.

The data analysis was performed by applying in-house-developed algorithms using the program language R. The spectra were background corrected by a SNIP (Sensitive Nonlinear Iterative Peak clipping) algorithm [43]. In order to estimate the peak area, the Simpson rule was utilized as implemented in the function sintegral from the package Bolstad [44].

The fabrication of the TopUp SERS substrate is registered within the patent application DE201510004114 (Sophie Patze, Uwe Hübner, Dana Cialla-May).

The projects “InfectoGnostics” [13GW0096F], “EXASENS” [13N13856], and “Jenaer Biochip Initiative 2.0” [03IPT513Y] within the framework “InnoProfile Transfer—Unternehmen Region” are supported by the Federal Ministry of Education and Research, Germany (BMBF). 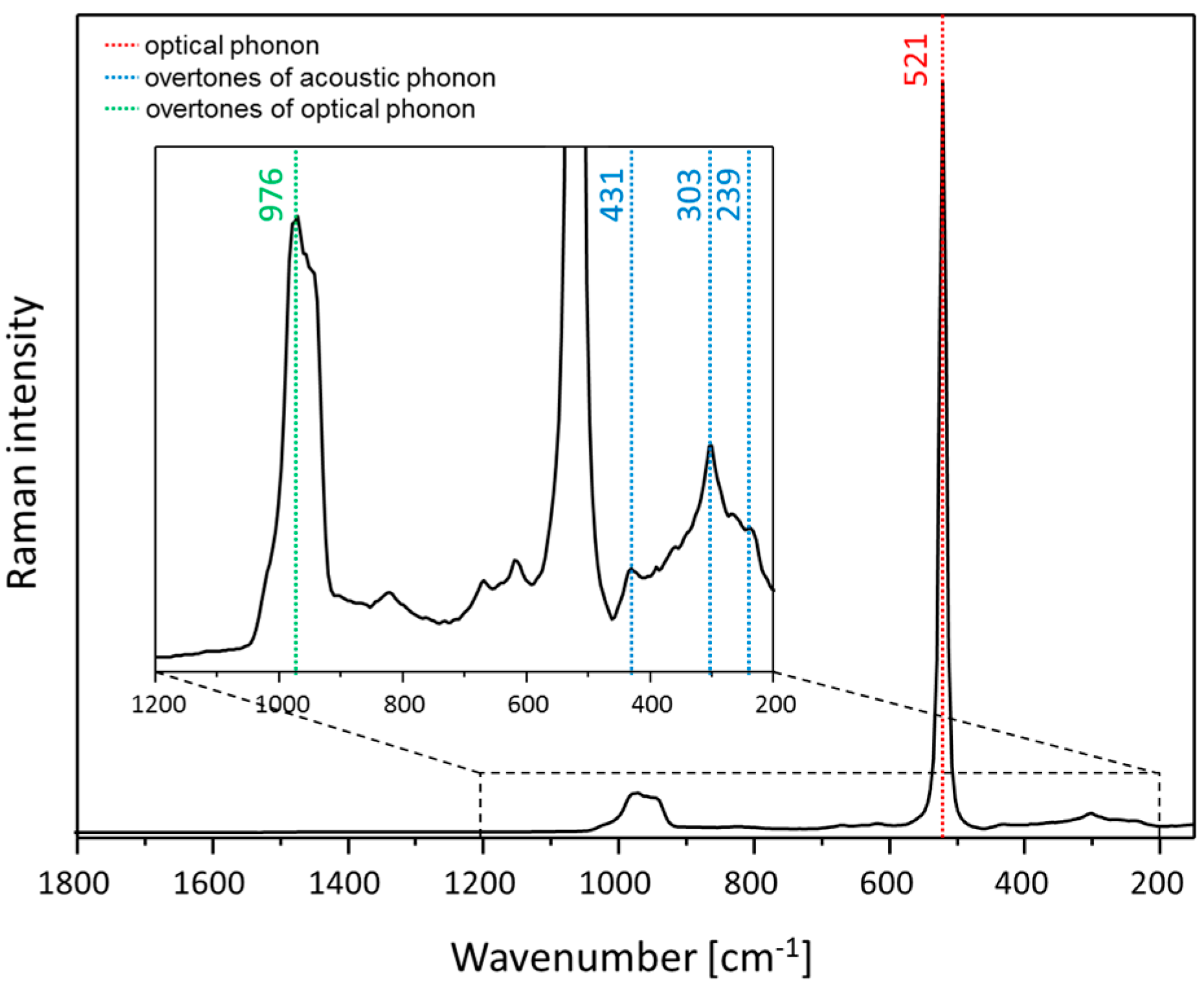 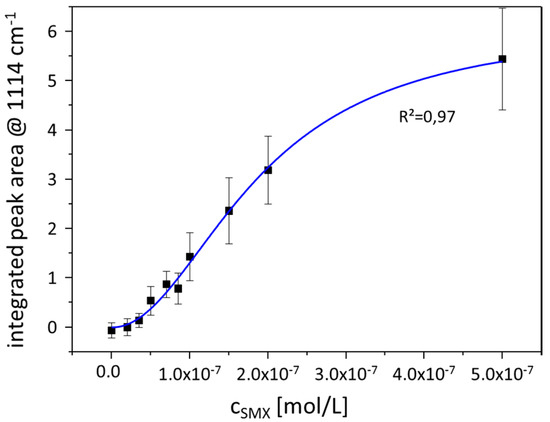 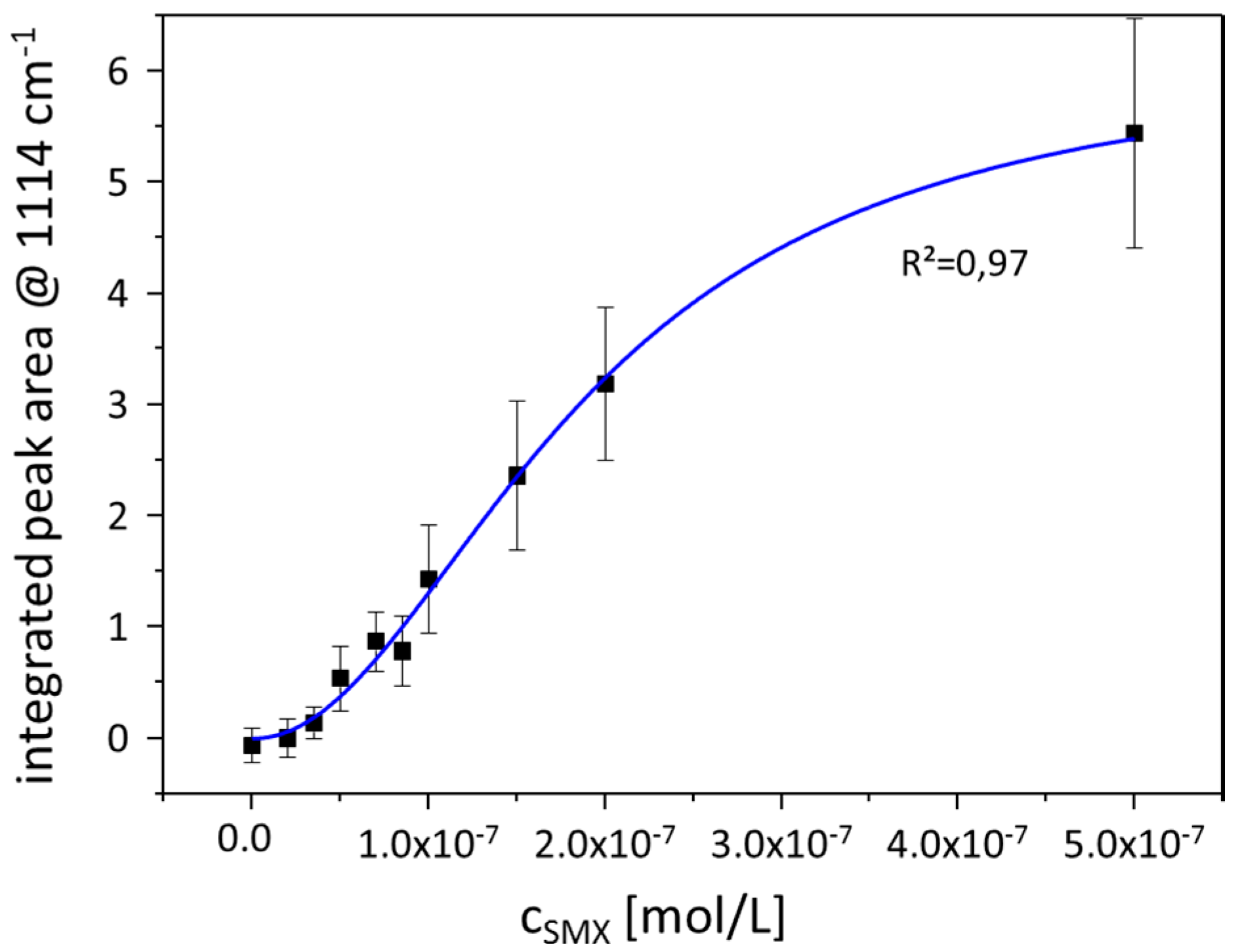