Cationic Substitutions in Hydroxyapatite: Current Status of the Derived Biofunctional Effects and Their In Vitro Interrogation Methods

The discovery of bioactive glasses (BGs) in the late 1960s by Larry Hench et al. was driven by the need for implant materials with an ability to bond to living tissues, which were intended to replace inert metal and plastic implants that were not well tolerated by the body. Among a number of tested compositions, the one that later became designated by the well-known trademark of 45S5 Bioglass® excelled in its ability to bond to bone and soft tissues. Bonding to living tissues was mediated through the formation of an interfacial bone-like hydroxyapatite layer when the bioglass was put in contact with biological fluids in vivo. This feature represented a remarkable milestone, and has inspired many other investigations aiming at further exploring the in vitro and in vivo performances of this and other related BG compositions. This paradigmatic example of a target-oriented research is certainly one of the most valuable contributions that one can learn from Larry Hench. Such a goal-oriented approach needs to be continuously stimulated, aiming at finding out better performing materials to overcome the limitations of the existing ones, including the 45S5 Bioglass®. Its well-known that its main limitations include: (i) the high pH environment that is created by its high sodium content could turn it cytotoxic; (ii) and the poor sintering ability makes the fabrication of porous three-dimensional (3D) scaffolds difficult. All of these relevant features strongly depend on a number of interrelated factors that need to be well compromised. The selected chemical composition strongly determines the glass structure, the biocompatibility, the degradation rate, and the ease of processing (scaffolds fabrication and sintering). This manuscript presents a first general appraisal of the scientific output in the interrelated areas of bioactive glasses and glass-ceramics, scaffolds, implant coatings, and tissue engineering. Then, it gives an overview of the critical issues that need to be considered when developing bioactive glasses for healthcare applications. The aim is to provide knowledge-based tools towards guiding young researchers in the design of new bioactive glass compositions, taking into account the desired functional properties. View Full-Text
Keywords: bioactive glasses; alkali-free; scaffolds fabrication; additive manufacturing techniques; bone regeneration; tissue engineering bioactive glasses; alkali-free; scaffolds fabrication; additive manufacturing techniques; bone regeneration; tissue engineering
►▼ Show Figures 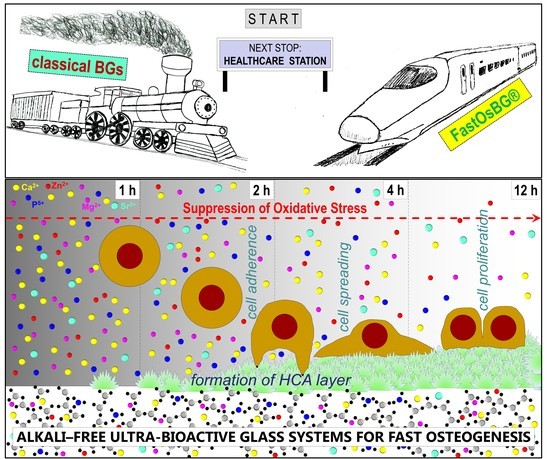