:
Calcium phosphate ceramics used in dentistry and orthopedics are some of the most valuable biomaterials, owing to their excellent osteoconduction, osteoinduction, and osseointegration. Osteoconduction and osteoinduction are critical targets for bone regeneration, and osseointegration is essential for any dental implantations. In this study, a hydroxyapatite (HAp) hybrid coating layer with the sequential release of bone morphogenetic protein 2 (BMP-2) was deposited onto an etched titanium substrate by electrochemical deposition. The resulting release of BMP-2 from Ti–HAp was assessed by immersing samples in a simulated buffer fluid solution. Through coculture, human osteosarcoma cell proliferation and alkaline phosphatase activity were assessed. The characteristics and effect on cell proliferation of the hybrid coatings were investigated for their functionality through X-ray diffraction (XRD) and cell proliferation assays. Findings revealed that −0.8 V vs. Ag/AgCl (3 M KCl) exhibited the optimal HAp properties and a successfully coated HAp layer. XRD confirmed the crystallinity of the deposited HAp on the titanium surface. Ti-0.8 V Ti–HAp co-coating BMP sample exhibited the highest cell proliferation efficiency and was more favorable for cell growth. A successful biocompatible hybrid coating with optimized redox voltage enhanced the osseointegration process. The findings suggest that this technique could have promising clinical applications to enhance the healing times and success rates of dental implantation.
Keywords:
calcium phosphate; bone regeneration; electrochemical deposition; hydroxyapatite

The use of biomaterials in dental implants has been prevalent for many years. Bone integration is a key factor determining a successful denture installation. If a denture is installed before bone regeneration (i.e., osseointegration), the tendency for dental failure is higher. Biomaterials such as Titanium-Aluminum-Vanadium alloy (Ti–6Al–4V, UNS R56400) are widely used in dental implants because of their excellent mechanical properties, high corrosion resistance, and superior osteocompatibility [1,2,3]. Osseointegration can require 3–4 months. Thus, it is desirable to shorten the healing time by enhancing osseointegration between Ti–6Al–4V and alveolar bone. The acceleration of osseointegration would reduce the inconvenience and discomfort experienced by patients following dental implant procedures.
There are numerous techniques used for coating Ti substrates, such as electrochemical deposition (ECD) [4], sol–gel [5], and plasma spraying [6]. Plasma spray is the most commonly used Ti–6Al–4V surface coating technique for implant attachment and bone integration [7]. However, this coating method has significant drawbacks, such as coating porosity and residual stress at the coating interface, as well as drastic changes in the composition and crystallinity of the calcium phosphate (CaP) powder [8,9].
ECD is a rapid and straightforward method, and provides good control of the coating material’s thickness, uniformity, crystallinity, and stoichiometry [10]. The process temperature of ECD is low compared to the plasma spray method. This method is typically used to coat hydroxyapatite (HAp, Ca5(PO4)3OH), which is a widely used biomaterial for bone implants [11]. HAp is a naturally occurring mineral form belonging to the calcium phosphate (CaP) family [12]. Therefore, HAp modification using ECD method on Ti–6Al–4V surface could have favorable results for osteoconduction.
Recently, coating with a bioactive growth factor has been determined to enhance the relationship between an implant and the bone to which it is attached [13]. Growth factors play crucial roles in various processes. Typically, they act as signaling molecules regulating bone induction, cell proliferation, as well as chondrocyte and osteoblast synthesis [14]. Some of these factors may affect osseointegration by altering the implant material, shape, surface texture, and hydrophilicity [15]. Thus, due to hydrophilicity, all dental implant surfaces must be treated to promote cell attachment [16]. However, if produced at a high temperature, bioactive coatings on the surface of Ti–6Al–4V can result in a weaker CaP phase and consequent peeling from the deeper coating layers [8]. In implants, bioactivity, bone resorption drugs, and growth factors may efficiently improve bone integration [17]. Among the growth factors (including platelet-derived growth factor, vascular endothelial growth factor, and transforming growth factor beta), BMP-2 is the most stable and least complicated [18]. BMP-2 enhances the osteogenic activity of osteocytes, accelerates osteoblast differentiation, and further promotes bone formation. It can also induce dentin and post-implant healing [19]. Free BMP-2 in blood is reported to rapidly spread to unrepaired blood vessels and surrounding tissue at the injury site [20]. BMP-2 can also increase osteogenic activity and stimulates bone-induced cell media, and bone defects can be repaired through stimulation by mesenchymal stem cells differentiating into osteoblasts, which induce dentin [21,22].
Jenny et al. reported that in the ECD process, the crystallization of calcium phosphate dehydrate and drug release rate were strongly dependent on the amount of carboxymethyl hexanoyl chitosan [23]. However, that paper lacks a discussion of the influence of applied ECD voltage on the material characteristics of the coated HAp film, as well as its osseointegration properties in cell test. Therefore, in this paper, the properties of HAp films using ECD coating at various application voltages were investigated. BMP-2 co-precipitated with HAp on the Ti–6Al–4V at different voltages was also studied to check its osteoconductivity, osteoinductivity, and osseointegration.

Prior to ECD, the Ti–6Al–4V substrate was etched in 6.2 M H2SO4 and 4 M HCl at 60 °C for 1 h to remove any oxide and increase surface roughness. The etched samples were washed by immersing them in deionized water at room temperature in an ultrasonic cleaning system at 37 kHz for 30 min. Then, the samples were dried for 24 h to produce natural oxidation to obtain increased bioactivity compared with pure Ti.
Before electrolyte preparation, 0.042 M Ca(NO3)2 and 0.025 M (NH4)2HPO4 solutions were prepared in deionized water. The etched Ti–6Al–4V substrate was used as a working electrode, a platinum sheet was the counter electrode, Ag/AgCl was the reference electrode, and HAp precursor salts solution served as the electrolyte. The electrolyte was immersed in an oil bath heated at 65 °C. The hybrid coating was prepared at −0.4, −0.8, −1.2, and −1.6 V constant-voltage ECD for 1 h. After ECD, the coated sample was rinsed with deionized water, dried, and stored at ambient temperature.
For the sample of BMP-2 and HAp precursor salts coated by coprecipitation, a treated HAp solution was used as the electrolyte, in which 10 ng/mL BMP-2 was suspended. Untreated Ti–6Al–4V substrate was used as the working electrode attached to the electrochemical reaction vessel. HAp/BMP-2 was coated to the Ti–6Al–4V surface through multicurrent plating with currents and time durations of 0.09 mA and 50 min, 0.22 mA and 50 min, or 0.47 mA and 30 min, respectively [23]. After HAp/BMP-2 coating, the samples were washed with deionized water and lyophilized. To compare the effect of HAp/BMP-2 coprecipitation by ECD, a control sample using the conventional immersion method was also fabricated. The control sample was firstly coated HAp by ECD, and then immersed in a BMP-2 solution of 10 ng/mL for 24 h.
Cyclic voltammetry (CV) and differential pulse voltammetry were performed on an electrochemical workstation CHI-760D potentiostat (CH Instruments Inc., Austin, TX, USA). For X-ray diffraction (XRD) analysis, the HAp powder was scratched from the Ti–6Al–4V substrate and packed to a flat surface on a sample holder. The XRD analysis of the crystallinity and chemical composition structure of the coatings was carried out using a D2 PHASER X-ray diffractometer (Bruker AXS Inc., Madison, WI, USA; X-ray wavelengths: Cu standard ceramic sealed tube, scan mode: 2 theta scan). XRD data were analyzed using X’Pert High Score (Malvern Panalytical Ltd., Malvern, UK). Scanning electron microscopy (SEM; TM-3030, source type: cartridge filament, accelerating voltage 5 kV, Hitachi, Japan) was used to analyze the surface morphology. Surface energy evaluation was assessed by the sessile drop technique to determine the relationship between porosity and the surface tension of the untreated and treated samples by using a contact angle goniometer (GBX, Digidrop, Dublin, Ireland) to determine the surface hydrophilicity. Thicknesses of the HAp films were measured using P10 Profilometer (KLA-Tencor, Milpitas, CA, USA).

The samples were immersed in 20 mL of simulated body fluid (SBF) solution (pH 7.4) for 7 days to evaluate the release rate of BMP-2. The SBF solution’s ion concentration was approximately equal or identical to that of human blood plasma at 36.5 °C. The SBF containing BMP-2 was extracted at each time point and replaced every day. The amount of released BMP-2 was assessed using a Quantikine enzyme-linked immunosorbent assay (ELISA) immunoassay. The BMP-2 concentration was determined using the standard curve created by following the precision on its corresponding ELISA kit. Accumulative release (%) was equal to the release amount at each juncture over the total amount encapsulated multiplied by 100.

BMP-2 and HAp hybrid coatings were successfully deposited on Ti–6Al–4V (Ti–HAp) by ECD. XRD patterns confirmed the coatings of HAp crystals. The surface morphology of the HAp coatings exhibited notable changes following immersion for several days in SBF solution. The Ti–6Al–4V incorporated HAp by ECD hybrid coating at 0.8 V exhibited an increase of the BMP-2 bioactivity, including their contact angle, cell differentiation and proliferation, and ALP activity, which was confirmed through coculture. The results indicated that co-immobilized HAp ions synergistically activated the responses of etched Ti. This simple and cost-effective technique could be a useful and efficient approach using ECD to achieve excellent osteoconductivity and osteoinduction, which could improve osseointegration in biomedical applications. 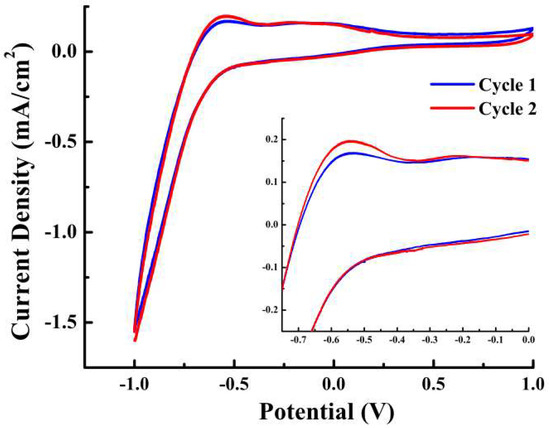 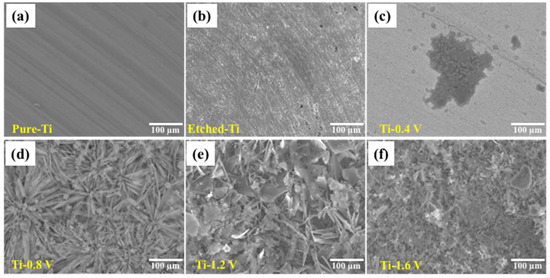 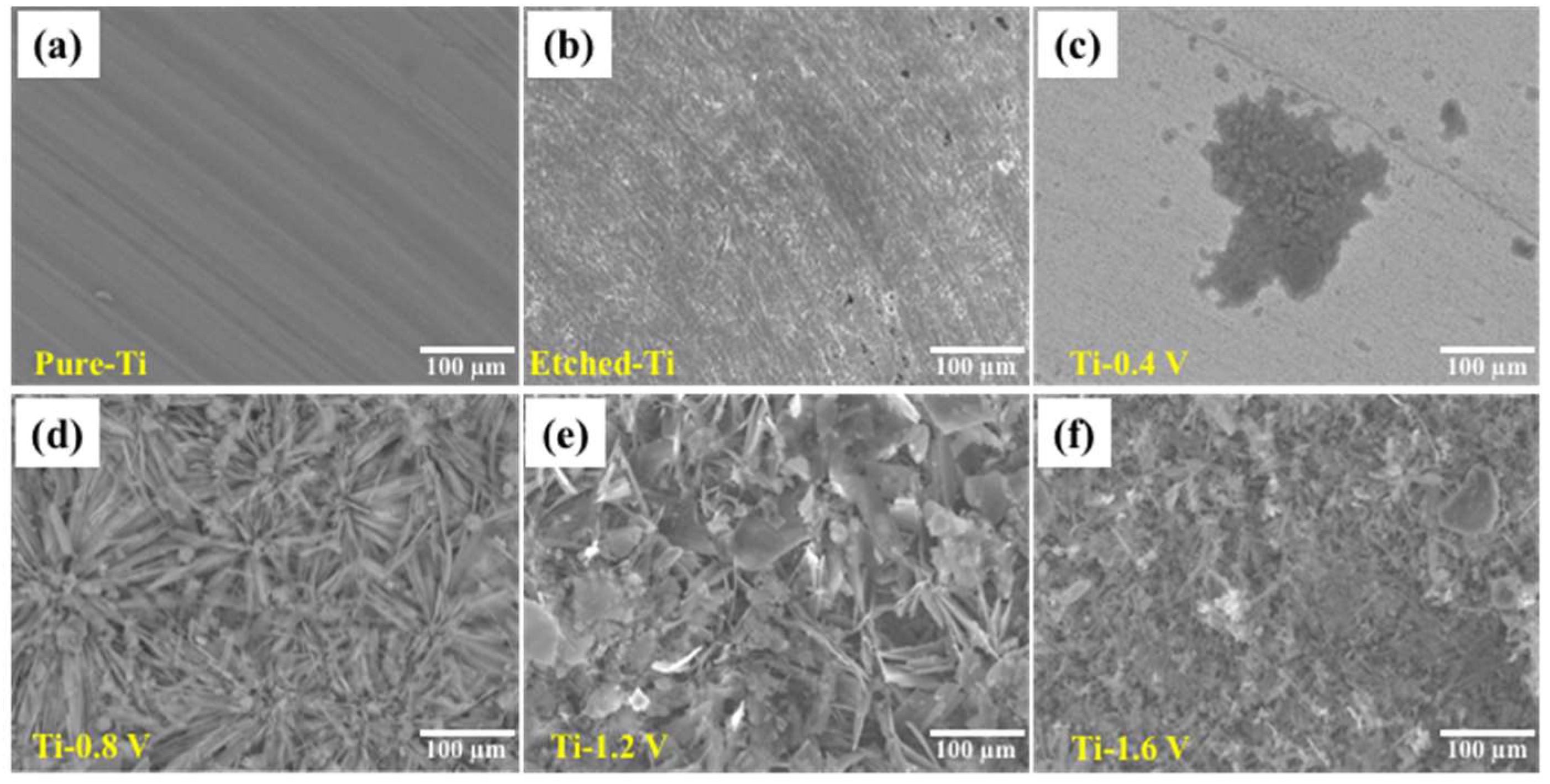 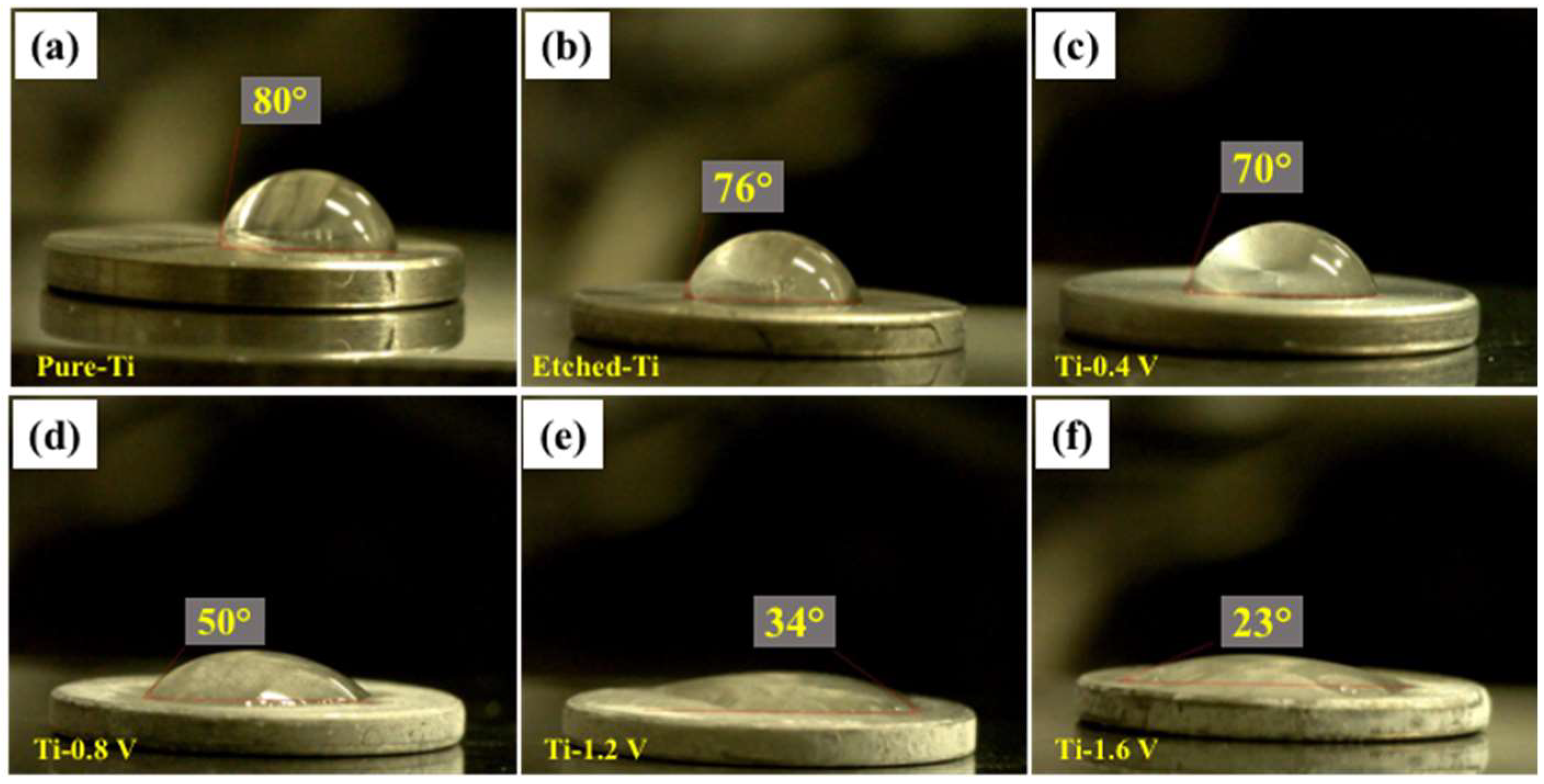 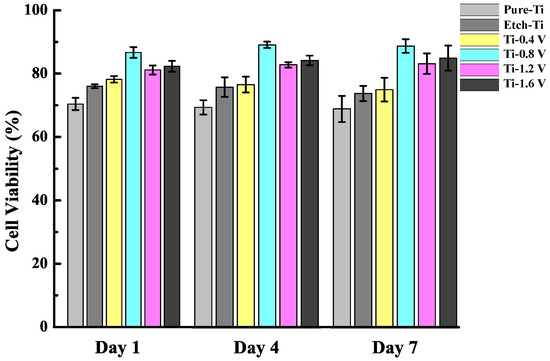 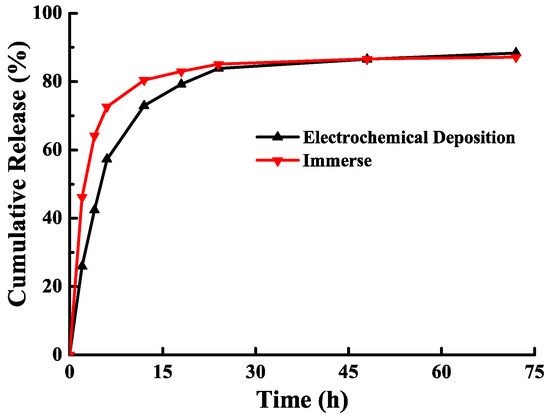