PLA was purchased from SUPLA Material Technology Ltd. (SUPLA 135N, Mn = 52,000 g/mol, Tainan, Taiwan) and the MWCNTs (Baytubes C150 HP) were purchased from BASF (Ludwigshafen, Germany). The development of functionalized MWCNTs using carboxylic acid, acyl chloride, amine, and hydroxyl groups was reported in our previous study [7]. Treating MWCNTs with carboxylic acid modifies their surface through the covalent attachment of organic acid to their π-conjugated skeletons. MWCNTs (0.1 g), sulfuric acid (8 mL), and nitric acid (24 mL) were placed in a 125 mL round-bottom flask that was equipped with a condenser and stirrer. The chemical oxidation reaction was performed using an ultrasonic apparatus at 60 °C for 48 h. Following acid treatment, the MWCNTs were functionalized with carboxylic acid on their surfaces. Next, another 0.1 g of MWCNTs was placed in a 250 mL flat-bottom flask with 100 mL of ethylene chloride. The mixture was sonicated for 1 h to disperse the MWCNTs in the solvent. Subsequently, 15 mL of thionyl chloride was added to the flat-bottom flask and the mixture was stirred using a magnetic stirrer and refluxed for 24 h. Next, the unreacted thionyl chloride and solvent were distilled and 50 mL of allyl alcohol was stirred into the acid chloride MWCNTs at 50 °C for 24 h. The synthesized acyl-chloride-functionalized MWCNTs were then washed in acetone to remove unreacted chemicals, and they were reacted with ethylene glycol at 80 °C for 12 h. Meanwhile, hydroxyl group-functionalized MWCNTs were synthesized, and the products were washed with ethanol to remove unreacted chemicals. Later, the acyl-chloride-functionalized MWCNTs were reacted with hexamethylene diamine in tetrahydrofuran (THF) at 50 °C for 12 h; similarly, amine-functionalized MWCNTs were synthesized, and the products were washed with THF to remove unreacted chemicals. Finally, the surface-functionalized MWCNTs were dried in a vacuum oven at 50 °C for 12 h [6,7].
The MWCNTs were initially functionalized with carboxylic acid, acyl chloride, amine, and hydroxyl groups, and they were then dispersed in a tetraethoxysilane (TEOS) solution through ultrasonic processing at room temperature; neat silica was similarly synthesized. Following gelation, well-dispersed silica in the MWCNT-grafted silica nanohybrids was obtained. Scheme 1 represents the synthesis of MWCNT-grafted silica nanohybrids.
In the study, the MWCNTs that were functionalized with carboxylic acid formed MWCNT-grafted silica nanoarchitectures; this fostered the development of MWCNT-grafted silica-reinforced PLA nanocomposites. PLA/MWCNT-grafted silica and PLA/MWCNT nanocomposites were prepared by a melt-compounding process using a Haake twin-screw extruder. The temperature of the heated zone from the hopper to the die was set to 180 °C, 190 °C, 195 °C, and 185 °C, and the rotation was set to a constant speed of 30 rpm. To fabricate PLA/MWCNT-grafted silica nanocomposites, PLA was melt-compounded with the addition of MWCNT-grafted silica at 0.05 and 0.5 wt % in the polymer matrix; PLA/MWCNT nanocomposites were similarly prepared.

Thermogravimetric analysis (TGA) of the surface-functionalized MWCNTs was conducted using a thermogravimetric analyzer (TGA2950, TA Instruments Inc., New Castle, DE, USA). The samples were evenly and loosely distributed in an open sample pan of 6.4 mm diameter and 3.2 mm depth with an initial sample weight of 6–10 mg. The temperature change was controlled from 75 °C to 650 °C at a heating rate of 5 °C/min. High purity nitrogen was continuously passed into the furnace at a flow rate of 80 mL/min. A Fourier transform infrared spectrometer (FTIR; PerkinElmer Spectrum 100, PerkinElmer Inc., Waltham, MA, USA) was used to identify the functional groups of the MWCNT-grafted silica nanohybrids. Spectra were obtained with a resolution of 4 cm−1, and their averages were obtained from at least 64 scans within the standard wavenumber range of 500–4000 cm−1. The characterization of MWCNT-grafted silica nanohybrids was achieved by Raman spectroscopy using the 532 nm line of a YAG laser, which was operated at a laser power of 500 mW. A laser with a beam diameter of approximately 2 μm was focused with a 1000× objective onto the surface of the MWCNTs. Solid-state 29Si NMR measurements were recorded at room temperature using a Bruker Avance 400 NMR spectrometer (Bruker Corp., Billerica, MA, USA) operating at 400 MHz for 29Si. Solid 29Si cross-polarization and magic-angle spinning NMR experiments were performed using a Bruker MSL-400 spectrometer operating at 400 MHz. For wide-angle X-ray diffraction (WAXD, Shimadzu Corp., Kyoto, Japan) experiments, a Shimadzu/XRD-6000 instrument with copper Kα radiation (λ = 0.1542 nm) was used. The scanning 2θ angle covered a range between 5 and 55° in steps of 0.2°. The microstructure of the MWCNT-grafted silica nanohybrids was analyzed by transmission electron microscopy (TEM, model JEOL JEM 1200 EX, JEOL Ltd., Tokyo, Japan) at an acceleration voltage of 100 kV. Tensile tests on the composites were carried out using a computerized universal testing machine (Instron 4465, Instron Engineering Corp., Norwood, MA, USA) according to the ASTM D-638 standard at a pull up speed of 5 mm/min at 25 °C. Five specimens were tested for each condition to minimize errors. The yield strength was estimated based on their stress-strain curve. The HDT of the PLA/MWCNT-grafted silica nanocomposite was measured with a Cotech HV-3000-PE instrument (Cotech Inc., Taipei, Taiwan) according to ASTM D-648 under a load of 0.455 MPa at a uniform heating rate of 2 °C/min. The temperature at which a test bar loaded to the specified bending stress deflects by 0.25 mm was noted as the HDT. The surface resistivity of the nanosamples was measured according to ASTM D-257 using a Keithley 6517A electrometer (Keithley Instruments Inc., Solon, OH, USA). The 3 mm thick and 75 mm diameter specimens were copper-plated for better contact after subjecting them to humidity conditioning at 95% RH and 35 °C.

The homogeneous distribution and dispersion of fillers within a host matrix are common prerequisites for the formation of nanohybrids. In addition, the dispersion must be stabilized to prevent filler agglomeration. Mixing through the sol-gel method disperses silica, while chemical modification helps to stabilize the dispersion and allows silica to engage with the CNTs. Therefore, surface-functionalized MWCNTs are attractive because their functionalization may improve the interaction between the MWCNTs and silica.
Following the sol-gel process, which involved a TEOS-to-MWCNT weight ratio of 2:1 and was performed at 25 °C for 24 h, the morphologies of the organo-modified MWCNT-grafted silica were observed using TEM. The images are shown in Figure 6. Figure 6a depicts an image of the neat silica nanoparticles (Si(OR)n) that were synthesized using nitric acid as a catalyst, revealing the existence of a coral-like crosslinked network in the silica. Figure 6b shows an image of the crude MWCNTs. The length of the MWCNTs was several tens of microns and their diameter was approximately 10–30 nm. Figure 6c–f shows TEM micrographs of the MWCNT-COOH-silica, MWCNT-COCl-silica, MWCNT-NH2-silica, and MWCNT-OH-silica nanohybrids, respectively. The morphology and structure of the formed colloidal silica particles depended on the molar ratio of the reagents. For example, hydrolyzed TEOS self-condenses to form large continuous silica networks with mesoporous structures, especially in the presence of a high or excessive concentration of the TEOS reagent [20]. In an earlier study [7], the aggregation of chemically modified MWCNTs was determined to be less than that of crude MWCNTs because the carboxylic acid, acyl chloride, amine, and hydroxyl functional groups on the surface of the modified MWCNTs (as well as the short length and low aspect ratio of the modified MWCNTs) increased their polarity. Thus, the functionalization of MWCNTs with carboxylic acid, acyl chloride, amine, and hydroxyl groups during the sol-gel process yielded MWCNT-grafted silica nanohybrids with a network structure of silica among the MWCNTs.
MWCNTs were incorporated into silica particles, not only to prevent the agglomeration of nanofillers but also to increase the surface area of the nanohybrids. Consequently, the MWCNT-grafted silica nanohybrids in our experiment featured relatively homogeneous silica without obvious agglomeration. By mapping the distribution of silicon, we concluded that the inorganic silica nanoparticles in the MWCNT-grafted silica nanohybrids were distributed uniformly on the nanometer scale and that their nanoarchitectures were well-defined. 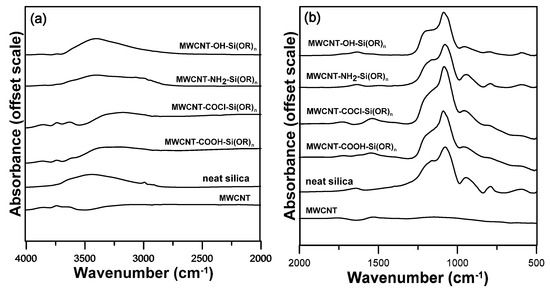 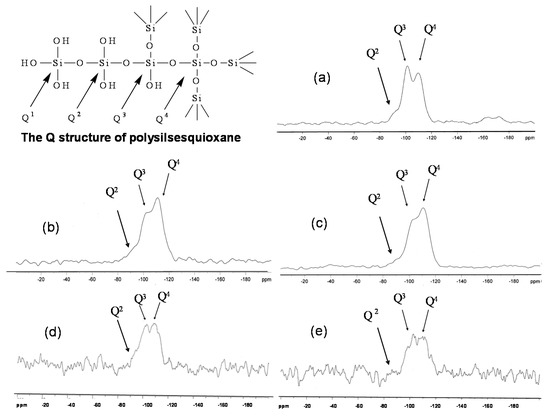 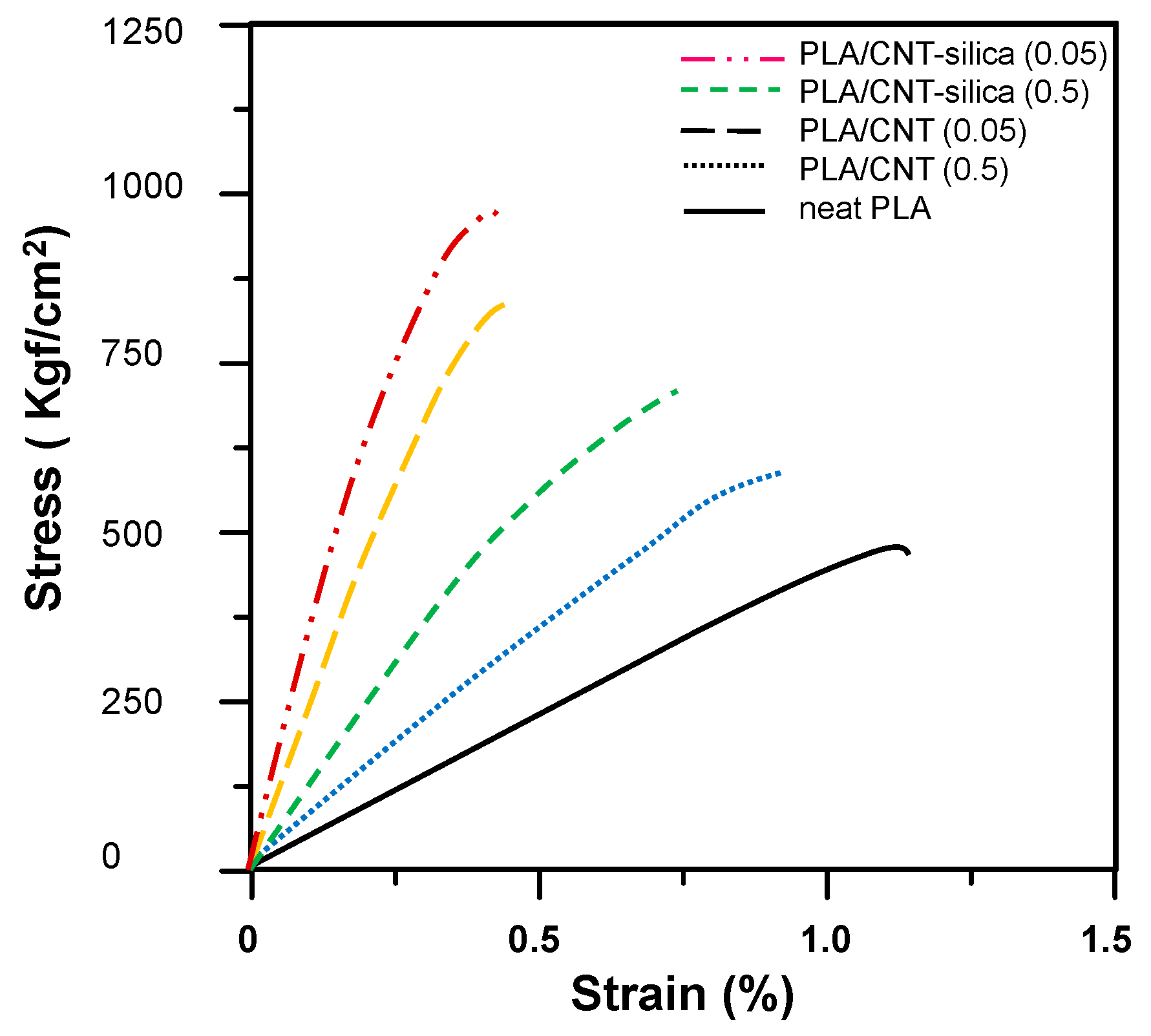