In the modern world, one of the most challenging issues is energy efficiency over the full life cycle of a product. For example, civil engineering and the construction industry aim at improvements in buildings’ energy balance, as the energy spent for the delivery of building materials to a construction site and a zero-waste closed loop material circular economy have now to be taken into account. Weight reduction, the increase of specific strength (MPa·kg−1·m3) and reuse of wastes can significantly contribute to solving these issues. One specific approach with regards to this is the utilisation of fly ash cenosphere (FAC) addition into bulks to lighten building materials without substantially compromising strength, through the development of clay-ceramic syntactic foams. FAC is a specific component of the fly ash emitted by coal combustion power plants and characterised by a low bulk density (0.2–0.8 g cm−3), excellent thermal (up to 1200 °C) and high chemical stability [1,2]. Recently, cenospheres have been used for the production of different types of syntactic foams with matrices, including a wide variety of polymers and metals [3,4,5,6,7,8]. The major advantage of cenospheres is their comparatively low cost, since the material is available as a by-product of coal-based energy generation. The mechanical properties of three-phase syntactic foams (SF) in terms of strength can theoretically exceed those of otherwise comparable two-phase foams thanks to the positive contribution of hollow filler particles’ shells, for example, towards mechanical performance [9,10]. These kinds of filler particles provide a low density and superior compressive strength, combined with enhanced acoustic and thermal damping characteristics [11,12,13]. In the last decade, the metal matrix SF added by the cenospheres have been studied intensively [7,14,15,16,17], alongside hybrid metal-matrix composites [18], advanced ceramic matrix materials [19,20,21], and concrete [22]. However, there is a lack of published information on natural clay ceramic matrix cenosphere-based SFs. In the present work, an alkali solution of NaOH 6 M was used to promote clay vitrification at a lower temperature than those applied in [23], and enhanced wetting between clay particles and cenospheres (CS). The study addresses development and characterisation of the low-density close porosity natural clay ceramics at a comparatively low processing temperature.

The precisely weighed dry raw materials were mixed in a plastic container for 3 min in a 3-axis tumbler mixer, the Inversina 2L (Inversina, Wald, Switzerland), at a speed of 40 min−1. The mixture was then transferred into a stainless steel container with a rubber-coated anchor-type mixer, the Clatronic Multi Food Processor KM3350 (Clatronic GmbH, Kempen, Germany), at a rotation speed of 60 min−1. The components of the mixtures under consideration are listed in Table 1. Aqueous solutions of components 3–6 (Table 1) were slowly added into the mixer container and mixed for 5 min. For the components 1 and 2 (Table 1), both volume and mass percentages are given, while for components 3–6 only mass % is provided reflecting their use in the solution. The amount (by volume) of this mixture required to produce the cylindrical samples at an identical size (20.0 ± 0.5 mm in height) was empirically determined for each composition according to different bulk densities of the semi-dry mixture. The semi-dry clay-CS mixtures were pressed by uniaxial, double-side die-pressing in cylindrical templates of 20.0 mm diameter (applied force: 700 N; holding time: 40 s). Subsequently, the specimens were dried for 48 h at 22 °C in a desiccator above CaCl2 and NaOH (50 + 50% by mass). As a final stage, the materials were fired in a NABERTHERM Laboratory Furnace L9/13 with a P330 PID (NABERTHERM, Lilienthal, Germany) controller at temperatures of 600, 950, 1000, 1050, 1100, 1150 and 1200 °C, employing a heating rate of 5 K min−1 and a dwell time at the processing temperature of 30 min.

To prepare the materials of specified compositions, a 6 M NaOH solution (14 wt %) was used as a water and NaOH source for the clay green body formation promoting surface activation and vitrification. To facilitate sample compaction and compacted specimen extraction from the mould, the lubricant Zusoplast G 72 (Zschimmer & Schwarz Gmbh & Co KG, Lahnstein, Germany) was used at a level of 2.0 wt %. Furthermore, the surfactant (−)-Ethyl L-lactate, (cleaning grade, ≥98.0%, Sigma-Aldrich Chemie Gmbh, Munich, Germany) was used to improve clay and CS particle wetting [18,24,26] at a level of 2 wt %. Another 0.5 wt % of a dispersing agent on huminite-silicate basis, Dolaflux B 11 (Zschimmer & Schwarz Gmbh & Co KG, Lahnstein, Germany), was introduced. All the above weight percentage values reflect the dry clay-CS mixture as represented in Table 1, the clay/CS ratios also calculated in vol % for convenience. The specimens with 0, 10, 30, 50 and 60 vol % CS loading were designated as CE-0, CE-1, CE-3, CE-5 and CE-6, respectively.

Uniaxial die pressing yielded cylindrical ceramic syntactic foam (CSF) samples with an initial diameter of 20.0 ± 0.2 mm and a height of 20.0 ± 0.5 mm. Images of these samples after firing at different temperatures are collected in Figure 1. For firing temperatures from 600–1150 °C and all series, the exact cylindrical shapes expected, without visible deformation and cracks were obtained (Figure 1a–c). In contrast, the samples CE-0, CE-1 and CE-3 fired at 1200 °C exhibited some macroscopic distortion. The level of deformation decreased with increasing CS content (Figure 1d,e). Moreover, as shown in Figure 1a–c, the size of different specimens differs as a consequence of deviations in shrinkage induced by the different cenosphere content level. The dependence of shrinkage on CS content and firing temperature is represented in Figure 2. In the firing temperature range 600–1150 °C, the shrinkage decreases with increasing cenosphere content level, varying from 3.8–9.9% for CE-0 to −0.6–2.6% for CE-6, which corresponds to the sample appearance depicted in Figure 1a–c. Negative shrinkage corresponds to a specimens expansion. This is also confirmed by Figure 2. The cause of negative shrinkage, illite clay self-expansion, is explained by the clay melting and gashouse product realising [28,29].

Figure 6 below details the dependence of apparent density on CS content and firing temperature, while Figure 7 depicts the development of water uptake as a function of these two parameters. Similar to pycnometric data, water uptake can be interpreted as a measure of open porosity. In this respect, the general tendency of the reference material without cenospheres is also reflected in the cenosphere-containing variants: higher firing temperature results in lower water uptake.
When comparing the different curves rather than interpreting individual ones, the main difference observed between the reference and the syntactic foams is a general increase of water uptake with porosity, namely, cenosphere content. A possible cause of this is the hindrance towards densification which the cenospheres represent. This interpretation is supported by the fact that the higher cenosphere content levels approach the bulk density of the cenospheres themselves, which implies that, during firing, there are few remaining degrees of freedom for cenosphere movement and thus few possibilities for compensation of the density reduction experienced by the clay matrix.
At first sight, this finding may seem to contradict Figure 6, which indicates a clear increase of porosity at firing temperatures above 1100 °C for samples containing lower amounts of cenospheres. However, since Figure 6 reflects total porosity, whereas Figure 7 only covers open porosity, the likely explanation is that the observed reduction in density is mostly based on closed porosity. This again matches the known process of gas evolution in the clay matrix, which leads to the development of closed porosity and has already been explained above in conjunction with Figure 3 and Figure 4. The fact that increasing the cenosphere content level means reduced clay matrix volume fraction also supports this interpretation, as it would imply that the density reduction effect caused by gas release and associated development of porosity in the matrix would diminish for syntactic foams with increasing filler-based porosity.

The present study was dedicated to the evaluation of clay matrix syntactic foams using cenosphere-type hollow spheres as filler to introduce porosity. The work has succeeded in demonstrating the general viability of this approach, but it also indicated that the formation of the final foam is a complex process involving up to four different types of porosity, the development and expression of which is greatly influenced by the processing conditions applied. As a consequence, the compressive strengths of the materials produced do not show clear tendencies, such as, for example, a monotonous dependence of compressive strength on cenosphere content level and/or firing temperature. To provide an example, in terms of compressive strength, the optimum firing temperature turns out to be 1200 °C for samples containing 50 and more vol % of microspheres, while it is 1100 °C for samples with cenosphere volume percentages of and below 10%.
It appears that, for the higher porosity materials, there is no specific, direct strengthening effect of the cenospheres, which differs, for example, from our experience with metal matrices and specifically with polymer matrix syntactic foams. The interpretation of these results is made more complex by the fact that specifically in the syntactic foams we have to take into account the aforementioned, different types of porosity over the firing temperature range (open-cell porosity in matrix at lower firing temperatures, closed-cell porosity in matrix at higher firing temperatures, filler-based porosity independent of the firing temperature). The effect as such is visible through trends in density, water uptake and pycnometric measurements.
However, the lack of a pronounced increase of strength associated with the structural characteristics of a syntactic foam (as exemplified by Equation (1) above through the addition to strength of the hollow particle shell material) may partially be explained by the similarity in composition and structure between cenosphere shell and matrix material: basically, this similarity shifts the material towards a two-phase foam, whereas common syntactic foams profit from their three phase nature. In polymer matrix foams, the shell materials typically outperform the matrix in terms of mechanical characteristics, an effect which overcompensates the slightly higher density of the shell material. In contrast, in steel matrix syntactic foams, the absolute strength and stiffness of the matrix material exceed the corresponding characteristics of the shell material, however, the lower density of the latter allows it to surpass the weight-specific characteristics of the matrix. Thus in both cases, the syntactic foams directly profit in some way or another from their three-phase nature. This advantage is lost in the case of the present foams, where the hollow filler mainly allows porosity to be introduced in a more controlled manner than that achievable through stochastic effects like bubble formation based on internal gas release. Still, the increase in strength of medium-to-high porosity syntactic foams with firing temperature is an interesting phenomenon which deserves additional attention in the course of future work in the field. At present, it can qualitatively be explained by assuming three parallel effects:

Support for this work was provided by the Riga Technical University through the Scientific Research Project Competition for Young Researchers No. ZP-2016/35. 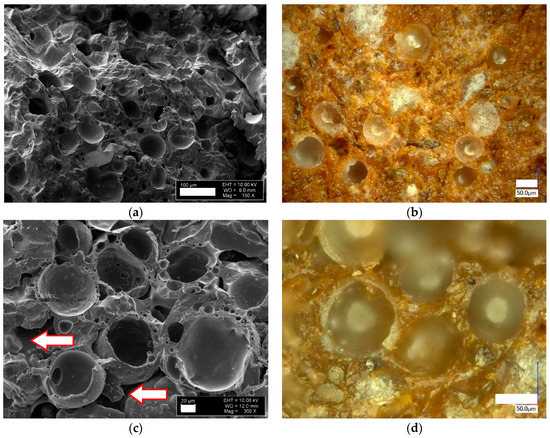 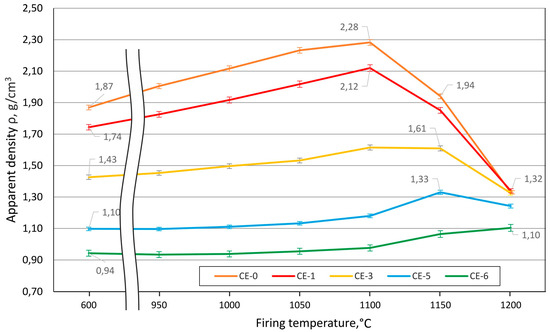 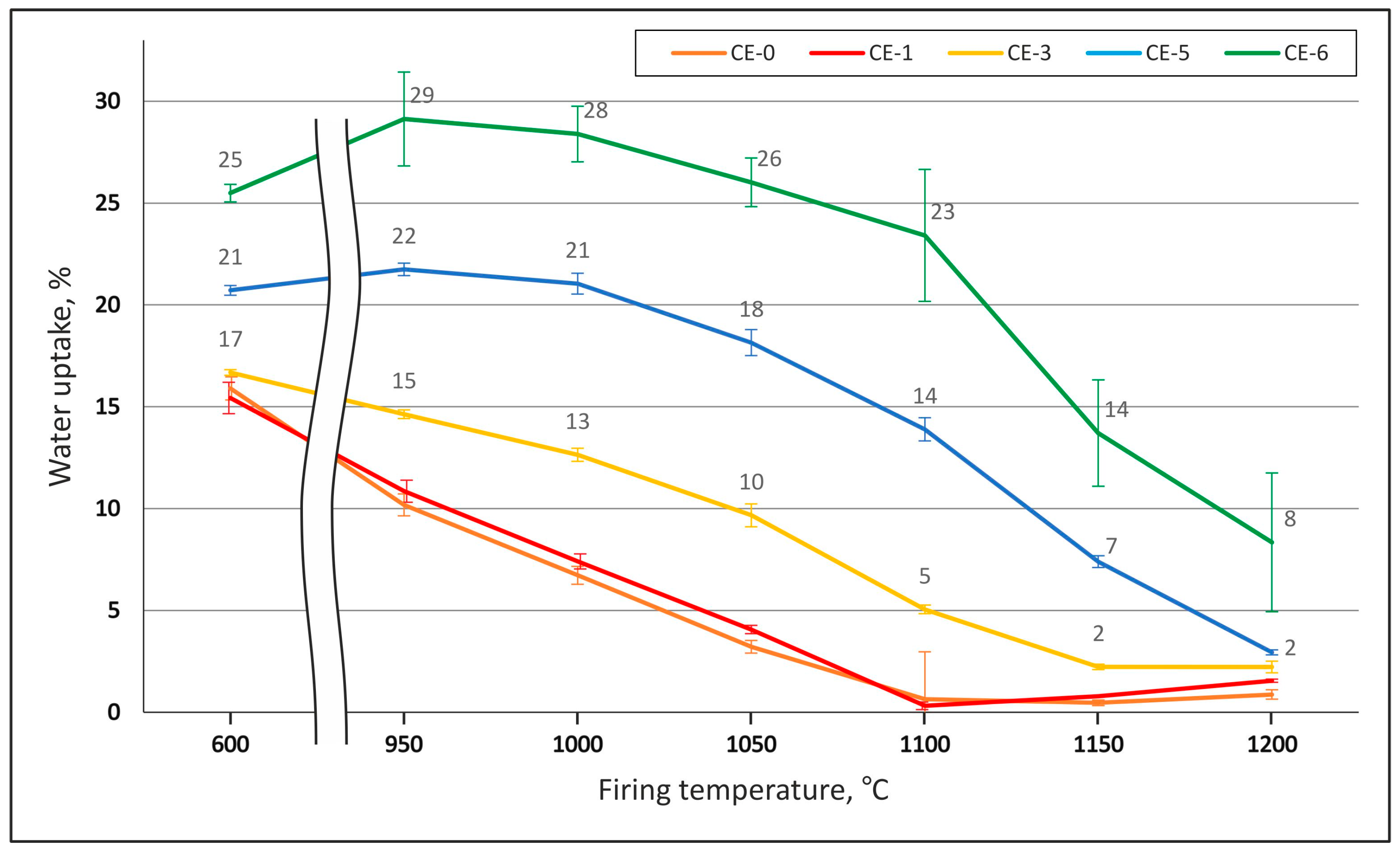 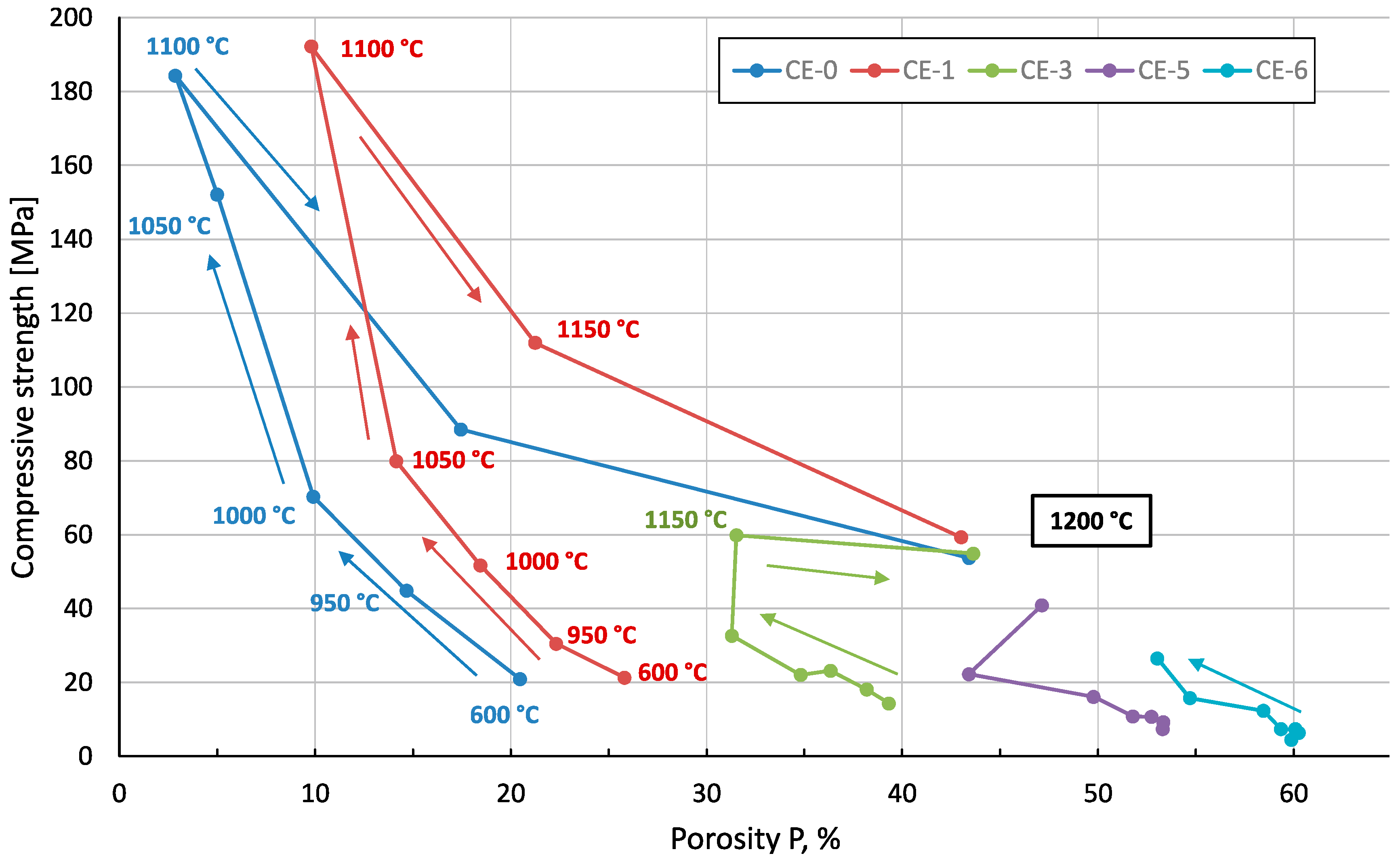 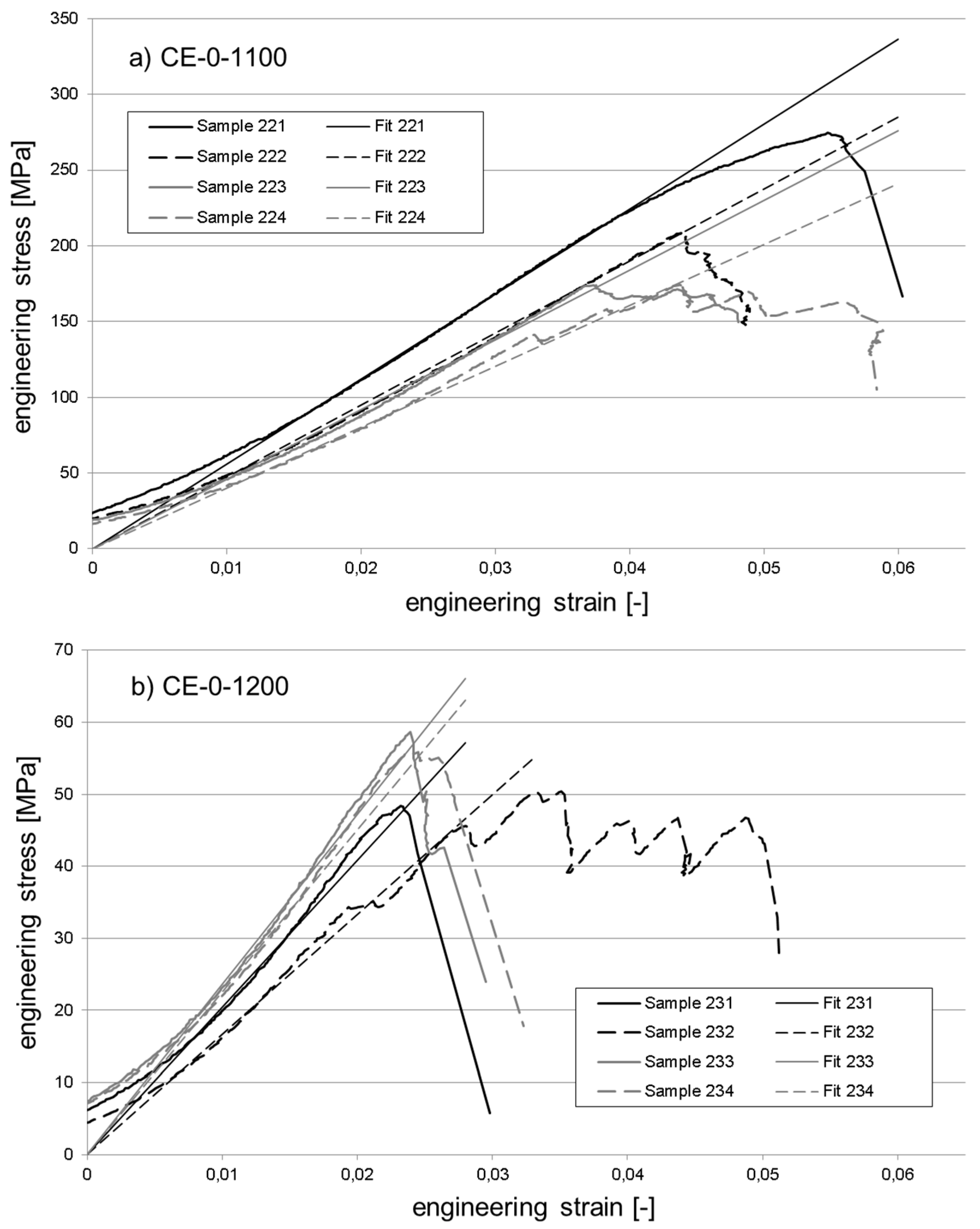