Assembly Modulated by Particle Position and Shape: A New Concept in Self-Assembly

Single, or isolated small arrays of, spherical silica colloidal particles (with refractive index ncolloid = 1.47 and radius R = 350 nm or 1.5 μm) were placed on a silicon substrate and immersed in carbon tetrachloride (nliquid = 1.48) or toluene (nliquid = 1.52). Areas of the sample were then exposed to a single laser pulse (8 ps duration, wavelength λ = 355 nm), and the spatial intensity modulation of the near field in the vicinity of the particles revealed via the resulting patterning of the substrate surface. In this regime, ncolloid < nliquid and the near-field optical intensification is concentrated at and beyond the edge of the particle. Detailed experimental characterization of the irradiated Si surface using atomic force microscopy reveals contrasting topographies. The same optical behavior is observed with both liquids, i.e., the incident laser light diverges on interaction with the colloidal particle, but the resulting interaction with the substrate is liquid dependent. Topographic analysis indicates localized ablation and patterning of the Si substrate when using toluene, whereas the patterning induced under carbon tetrachloride is on a larger scale and extends well below the original substrate surface—hinting at a laser induced photochemical contribution to the surface patterning. View Full-Text
Keywords: colloids; laser processing; patterning; liquid induced photochemistry colloids; laser processing; patterning; liquid induced photochemistry
►▼ Show Figures 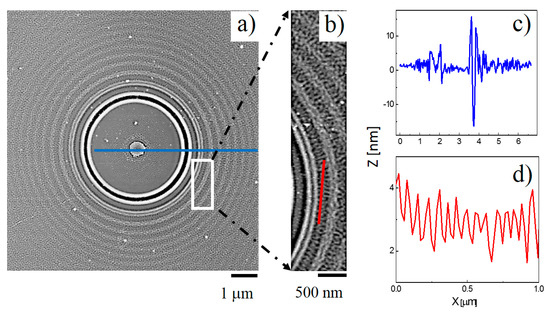