Titanium metal (Ti) and its alloys are widely used in orthopedic and dental fields. We have previously shown that acid and heat treatment was effective to introduce bone bonding, osteoconduction and osteoinduction on pure Ti. In the present study, acid and heat treatment with or without initial NaOH treatment was performed on typical Ti-based alloys used in orthopedic and dental fields. Dynamic movements of alloying elements were developed, which depended on the kind of treatment and type of alloy. It was found that the simple acid and heat treatment enriched/remained the alloying elements on Ti–6Al–4V, Ti–15Mo–5Zr–3Al and Ti–15Zr–4Nb–4Ta, resulting in neutral surface charges. Thus, the treated alloys did not form apatite in a simulated body fluid (SBF) within 3 days. In contrast, when the alloys were subjected to a NaOH treatment prior to an acid and heat treatment, alloying elements were selectively removed from the alloy surfaces. As a result, the treated alloys became positively charged, and formed apatite in SBF within 3 days. Thus, the treated alloys would be useful in orthopedic and dental fields since they form apatite even in a living body and bond to bone. View Full-Text
Keywords: Ti alloy; apatite; simulated body fluid; positive charge; acid treatment Ti alloy; apatite; simulated body fluid; positive charge; acid treatment
►▼ Show Figures 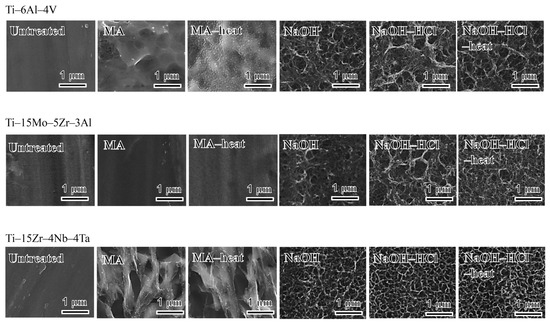