We only consider a pair of rotors and assume that they have completely the same characteristics, except when otherwise stated. The following parameters are chosen. These are the same as those used in the CFD simulations in [13], Hara et al. [14]. The number of blades per rotor is . The radius of the rotor is . The chord length is , and the area projected along the rotation direction is for . The moment of inertia is . Note that the previous CFD simulation [13,14] was two-dimensional, where the rotor height was instead of , as used for the three-dimensional model, and the moment of inertia was set at .
From the CFD simulation for a single rotor with the above parameters, under a fixed angular velocity condition, it was found that the maximum power is obtained when for . The time-averaged rotor torque in this case is . By using these values, we determined and for the rotor torque, Equation (3), and for the load torque, Equation (9). We further determined that and from and via Equations (4) and (5).
In the case of our rotor torque (3), the power becomes maximal at for a given . The rotor torque at this angular velocity is . We chose this to match the CFD value . Therefore, it is assumed that and . From Equation (4), we determine that Additionally, from Equation (5), we obtain Furthermore, in the CFD simulation, the angular velocity becomes stationary when the load torque is chosen to be 95% of the optimum rotor torque. We assume the same and thus obtain We will set the value of in Section 3.3.
By using these parameters, we obtain the torque curves shown in Figure 4. The rotor torque is plotted for and without considering the modulation by and the induced velocities. Note that the rotor torque characteristics at angular velocities lower than the maximum torque for each V are assumed to be different from those of the CFD and the experimental wind turbines to simplify the analysis. The intersection of the rotor torque curve for a given flow velocity and the load torque curve is the a stable steady state. For example, is the angular velocity at the steady state when . Note that the angular velocity at the steady state for a given flow velocity does not change when the rotor torque Q or is multiplied by a constant factor, since the load torque L was chosen to also be multiplied by the same factor in the present study.
Note that the adopted angular velocity values (3500 rpm) and the torque at the maximum power are slightly different from the values at the steady state (3496 rpm) and obtained in the CFD simulation based on the DFBI for a single rotor [14]. “SI” stands for single. We can use these values of and instead of those used above to determine , and and then and via Equations (4) and (5) by assuming the following three conditions: (i) the rotor torque balances the load torque at , (ii) the balanced torque is , and (iii) is 95% of the torque at the maximum power. We can immediately obtain or from the second condition and from the third condition, respectively. We can also obtain from the first one, which becomes a cubic equation for for a given . The resulting values are , , and , of which relative differences from the values obtained in Equations (24)–(26) and used in the simulations presented in Section 3.2,Section 3.3,Section 3.4 are within 5%. Note that was calculated from the cubic equation by a perturbation technique based on a trivial approximate solution that gives the maximum power in our model.

3.3. Dependence of the Synchronized Angular Velocity on the Gap

3.4. Oscillation Period of the Difference in Angular Velocities

We developed an analytical model of the interaction torque between two vertical-axis wind turbines through pressure fluctuation. In this model, the pressure fluctuation is obtained according to Bernoulli’s law, taking into account the temporal change in distance between the blades. Although rather crude assumptions were made in the development of the model, our simulations successfully demonstrated the phase synchronization as well as the oscillation of angular velocities around the mean value observed in the experiments and CFD simulations.
Our simulation results show that the angular velocities of the rotors oscillate in time during phase synchronization. When an artificial parameter is changed to strengthen the interaction, the oscillation period becomes shorter and the amplitude becomes larger. This is reasonable physically.
It was also found that phase synchronization occurs even for a pair of rotors with slightly different torque characteristics. This is important because the characteristics of the rotors cannot be identical in experiments.
Our model includes the induced velocities, which change the effective wind speed at each rotor. The simulation results also show that the mutually induced velocity can explain the qualitative dependence of the phase-synchronized angular velocities on the rotational direction of the rotors and the gap distance between them.
The oscillation period of the difference in angular velocities was found to be longer in the CU layout than in the CD layout. Additionally, the oscillation period was found to be longer for larger gap distances. This dependence seems to be related to the mean angular velocity of the rotors during phase synchronization. The mutually induced velocity changed the mean angular velocity in our simulations. The weaker interaction for larger gap distance made the oscillation period longer.

This work was supported by JSPS KAKENHI Grant Number JP18K05013. The second author was supported in part by the International Platform for Dryland Research and Education (IPDRE), Tottori University.

The data presented in this study are available from the corresponding author upon reasonable request.

Appendix A. Verification of Parameter Dependence 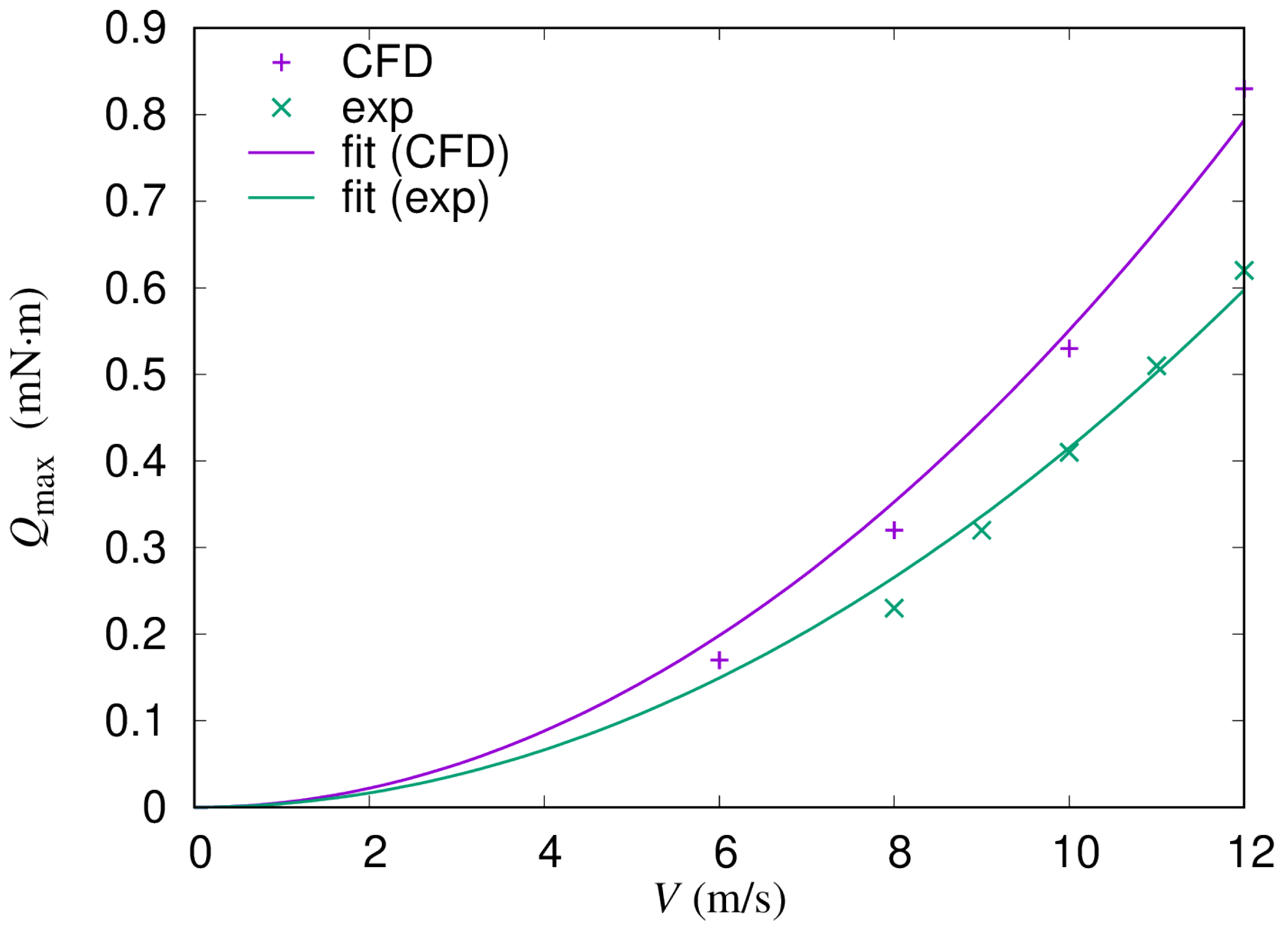 Second, let us show the dependence of on flow velocity V, also read from Figure 2 of Ref. [14] and Figure 3 of Ref. [8]. Figure A2 shows the CFD and experimental data, as well as their fitting curves taken to be linear in V. Although the number of data points is not enough, the fitting curves appear to agree well with the CFD and experimental data.

Third, the torque dependence on the azimuthal angle obtained by the CFD is shown. A rotor with three blades, of which dimensions are the same as described in Section 3.1, was placed in the flow field of which upstream flow velocity was 10 m/s. The modulation of the torque, expressed by Equation (6), tries to simulate this dependence. Figure A3 shows the averaged torques over the 16th–20th rotations of the CFD data, which was not published previously. For , the torque is the summation of torques on all blades of the rotor. The torque for a single blade has its maximum at . In the downstream half, the torque on a single blade becomes negative in the CFD, although it is set to be zero in Equation (6) for simplicity. 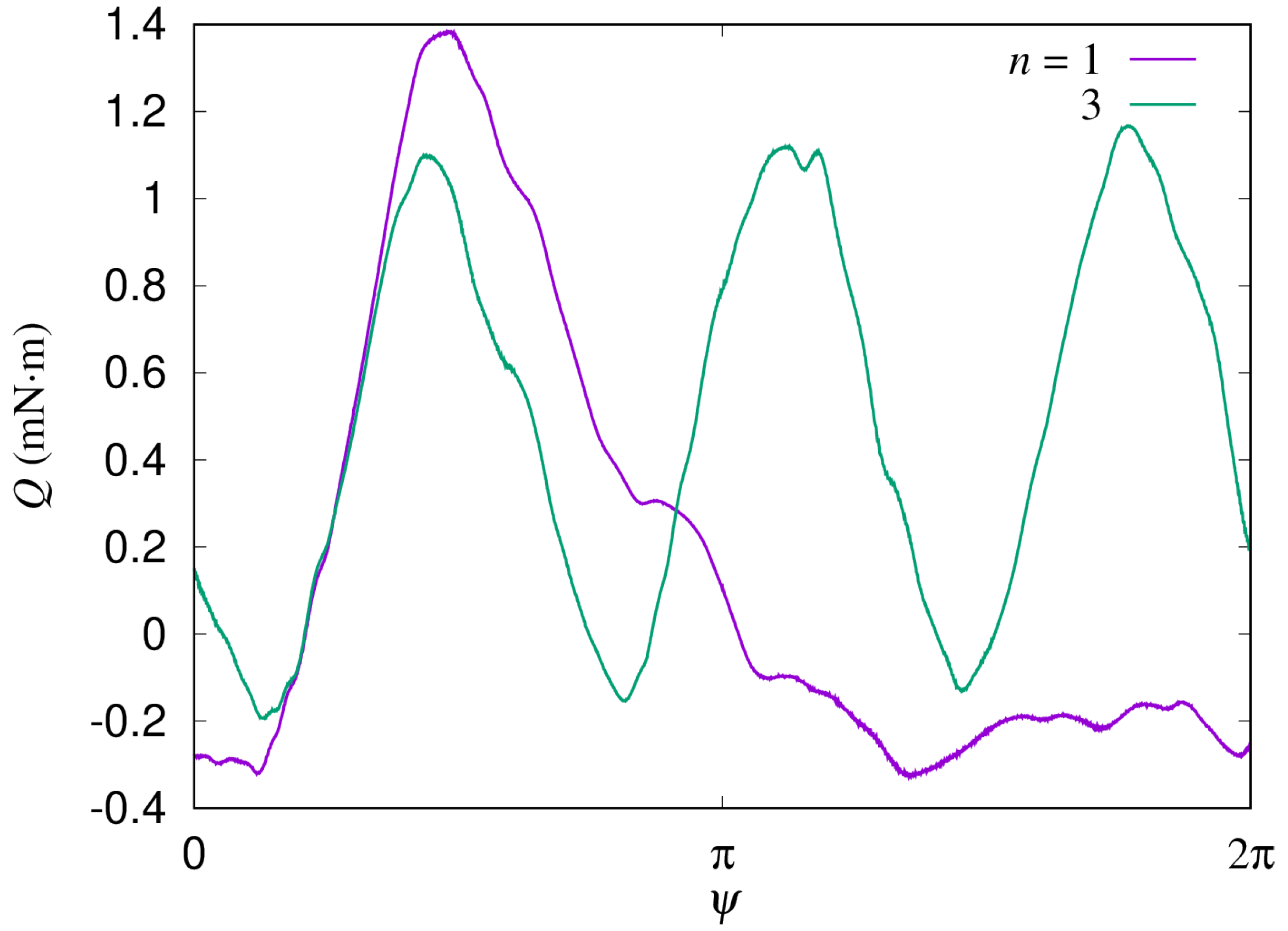 Finally, let us show the dependence of on flow velocity. Figure A4 shows obtained by CFD simulations, and their fitting curves taken to be linear in flow velocity. The CFD data were obtained by the time average of the simulation results. In the figure, “inf” means a plot of asymptotic values of at infinity against upstream flow speeds, and the “ep”, or evaluation point, means a plot of evaluated on a circle with a 36.1 mm radius centered at the rotor against flow speeds on the upstream side at 36.1 mm from the rotor center. Precisely, the flow speeds of the “ep” case are obtained by averaging over a 50 mm range in the spanwise direction. Note that the horizontal axis is not the upstream velocity for the “ep” case, although it is labeled by V. The fitting curves agree well with the CFD data.

In this Appendix B, normalized expressions of our model are summarized. First, let us normalize and given in Equations (4) and (5), respectively, as follows: where is the mass density of air, and is the swept area of rotor i. Note that and are independent of . By using Equations (A1) and (A2), the torque coefficient , or normalized rotor torque given in Equation (3) with , can be expressed as where is the tip–speed ratio of rotor i. The torque coefficient is expressed only by , and the dimensionless parameters and only. The rotor torque becomes zero when becomes equal to the no-load tip–speed ratio .
Next, the circulation in Equation (8) is normalized as Note that is independent of .
Lastly, let us normalize the load torque given in Equation (9) as where
Again, the parameter is independent of .
By using these expressions, numerical values of , , , and corresponding to the parameters used in Section 3 are obtained as follows:Note that the mass density of air is assumed to be . The rotor radius is and the swept area is .
Let us point out that the simulation results shown in Section 3 can be interpreted, if is expressed by the tip–speed ratio , as results with a different set of a flow velocity , a rotor radius , and a swept are that give the same dimensionless parameters , , , and . 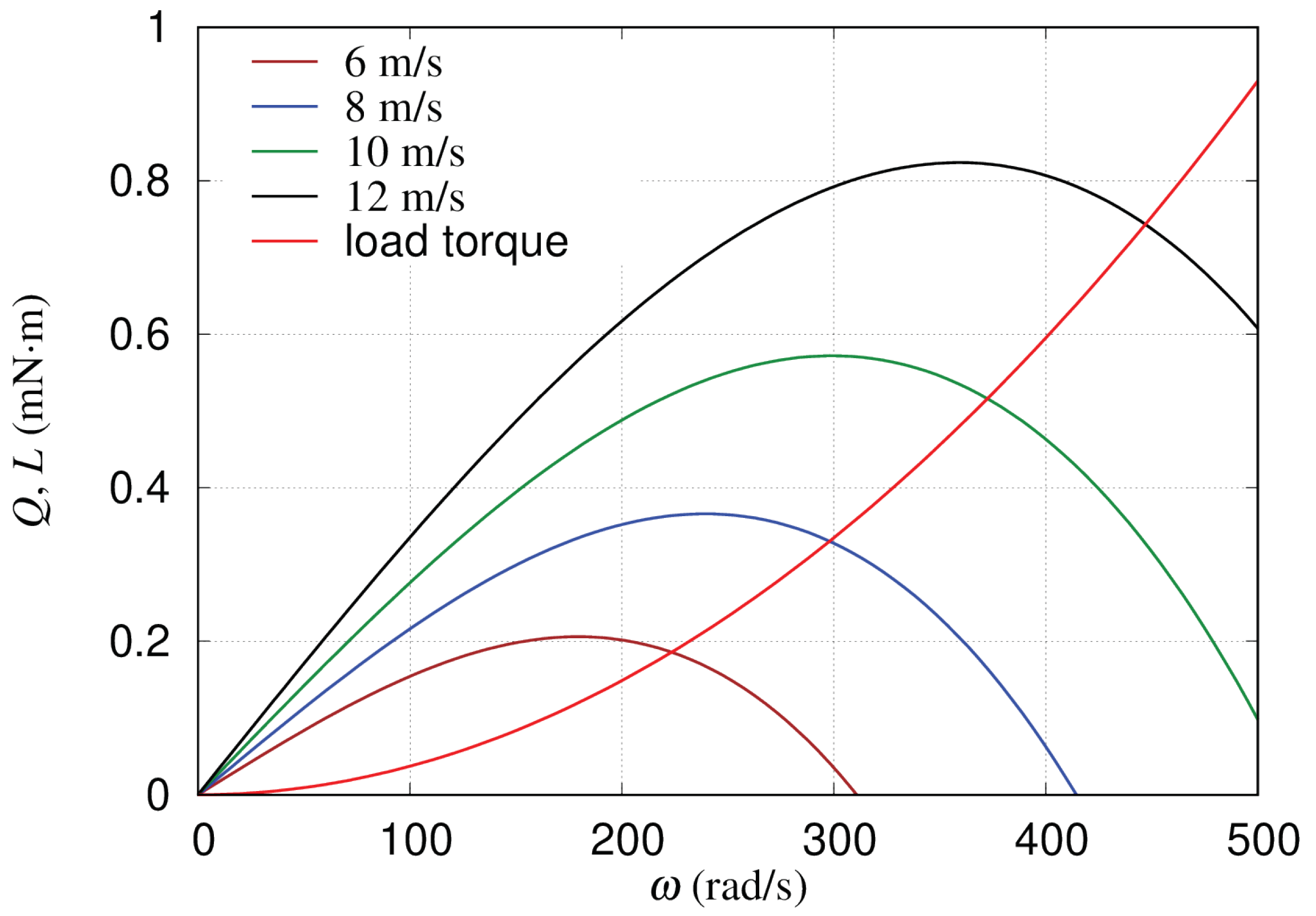 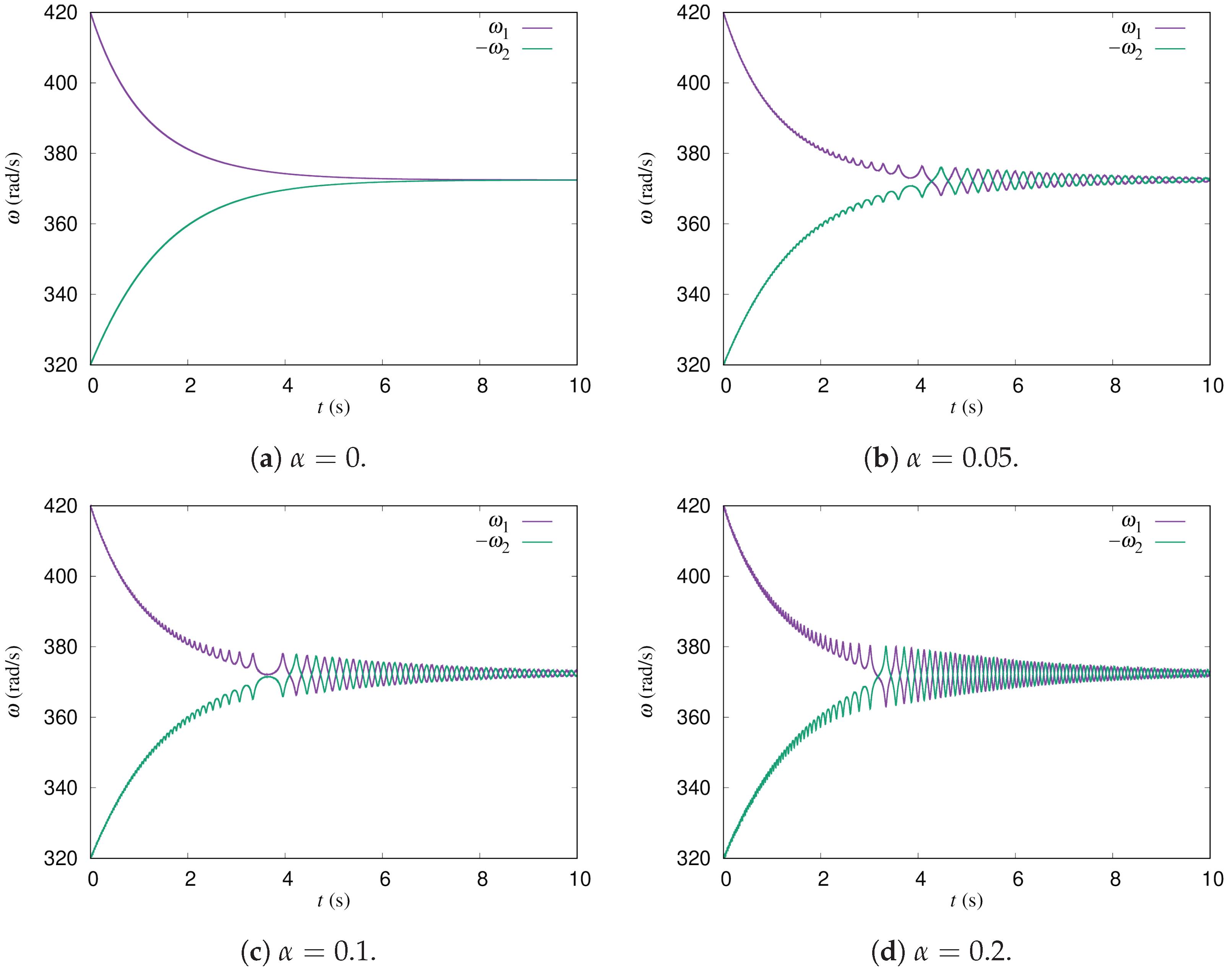