Regional Diversity of Technical Efficiency in Agriculture as a Results of an Overinvestment: A Case Study from Poland

:
This paper assesses the extent, scope and importance of financial support for Polish organic farming from 2004 to 2019. The analysis focuses particularly on how the changes in the amount and structure of organic farming payments affected farmers’ interest in specific organic crops during three financing periods: the 2004–2006 Rural Development Plan, the 2007–2013 Rural Development Programme (RDP) and the 2014–2020 Rural Development Programme. This paper aims to answer the question of whether and to what extent the organic farming support policy impacted the development trends followed by, and transformation processes affecting, this sector. It follows from this analysis that in the first decade after joining the European Union, Poland implemented a policy of making payments easily available. It was primarily focused on the quantitative growth of organic farming rather than on stimulating supply. As the payments were easily accessible and decoupled from production, subsidy-oriented farmers were additionally encouraged to seek political rent. This resulted in the instability of a large group of farms who discontinued their organic farming activity in 2014. That year, the policy was amended because of the need to improve the allocation efficiency of subsidies and to couple them with the provision not only of environmental public goods but also of private goods in the form of organic farming products. The current support policy opens up greater opportunities for leveraging the potential of organic farming while reaping environmental and socioeconomic benefits and contributing more than ever to sustainable development.
Keywords:
agricultural policy; financial support; organic farming; sustainable development; Poland 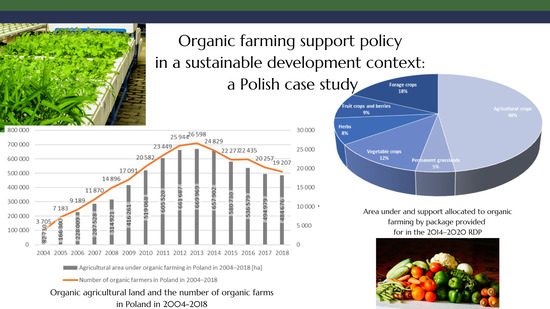 This study will take a look at the changes in the Polish support policy for organic farming under the Agri-environmental Schemes (2004–2006 and 2007–2013) and the measure “Organic farming” (2014–2020). Specifically, the authors ask about the relationship between the support policy, on the one side, and the changes in the structure of organic crops, in the amounts of support, and in the beneficiaries, on the other. Did the beneficiaries’ production decisions depend on the changing financing conditions for particular groups of organic crops? If so, to what extent? The study investigated the relationships with institutional solutions, especially with the changes to requirements imposed on organic payment beneficiaries. This paper relies on a descriptive and comparative analysis based on statistical data, strategic documents, legal acts and the literature on the subject. A line of regression was calculated to illustrate the relationship between the levels of support and the area of organic farmland covered.
Materials underpinning this research consisted of data on area payments, as delivered by the Agency for Restructuring and Modernization of Agriculture, which allocates payments to organic farmers under the Rural Development Programmes. The time span for this data is from Poland’s accession to the European Union until 2019. This paper also relied on data retrieved from the Agricultural and Food Quality Inspection (AFQI), which publishes biannual reports on organic farming. The most recent one includes the 2017–2018 data. In this paper, the analysis of financial support for organic farming was limited to area payments in three programming periods: the Rural Development Plan (2004–2006 RDP), the Rural Development Programme (2007–2013 RDP) and the 2014–2020 RDP. Delimiting these periods was a way to answer the question of whether and to what degree the changes in the conditions and amounts of payments affected organic farmers’ decisions reflected in the transformation of the volume and structure of crops eligible for support.

As shown by research findings, financial support is an important development driver for the Polish organic sector. In the study period, changes in the level and allocation principles of support were reflected in a changing development pace of the organic sector and in the varying structure of crops.
First, in the context of support, the development pace of the organic sector depends on a number of other factors, including regional socioeconomic conditions, but also on institutional and regulatory aspects. Therefore, the quality of the institutional and regulatory environment and a clearly defined goal, namely to generate growing environmental benefits, are important development drivers for the organic sector. It seems that the future Polish support policy should clearly define these goals in order for the future beneficiaries to make more informed decisions on whether to go organic and to better realize the value that organic farming provides for sustainable development.
Second, the fact that organic payments (the main development accelerator of the Polish organic sector) remained at a relatively high level for some time was a weakness of the support policy. Indeed, organic farming development cannot be primarily driven by an increase in the amount of support and by a high share of payments in farmers’ incomes. Otherwise, there would be growing risk of farmers becoming dependent upon government policy and upon how stable it is. Sometimes, an excessive level of institutional regulation involved in that policy can slow down organic farming growth and make it more vulnerable to external disruptions. Hence, while organic farming support should be an additional income that compensates for higher costs of organic production, it cannot be the sole factor behind the decision to go organic.
Third, the study period also witnessed some positive changes in the support policy. This resulted in improvements to the structure of organic crops and promoted sustainable farming practices, as reflected by a number of developments, including the growing level of payments for forage and vegetable crops, and the resulting increase in their share in the structure of agricultural land.
This study provides new aspects of knowledge on organic farming support policy and on the effect it has on the sustainability of development processes experienced in this type of farming. This paper presents some aspects of the support policy, which do not exhaust the complex problem of how it affects the development of organic farming. It is recommended to continue research on various policy instruments in the area of production, processing, promotion and consumer education, and to analyze how efficient they are in attaining the defined goals. Further qualitative research on organic farming support is needed. It should focus on how it is viewed by farms who discontinued their organic practices. Such a study could help answer the question of how much the decision to quit organic farming depended on the dedicated support policy and to what extent it was driven by other factors. 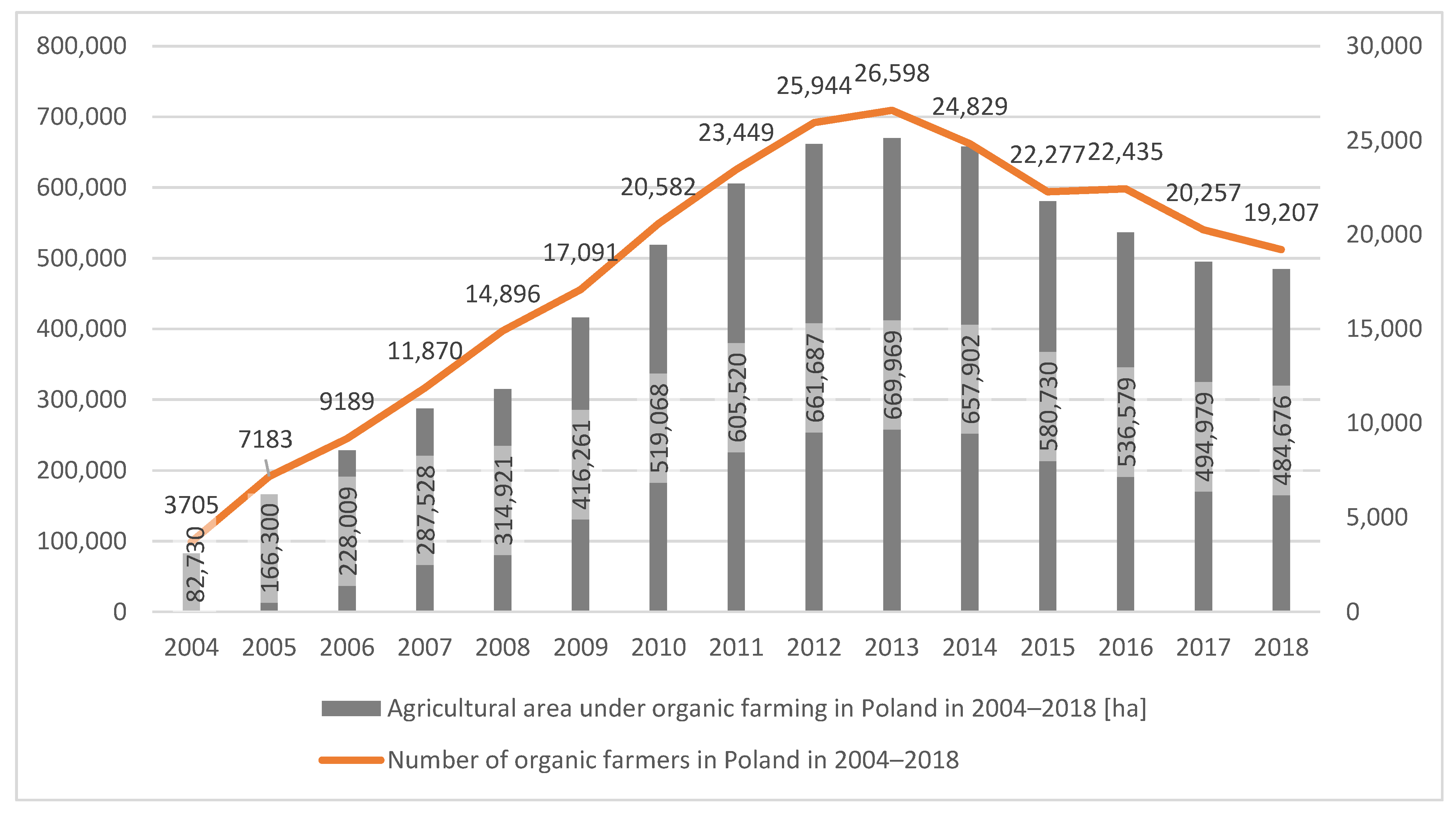 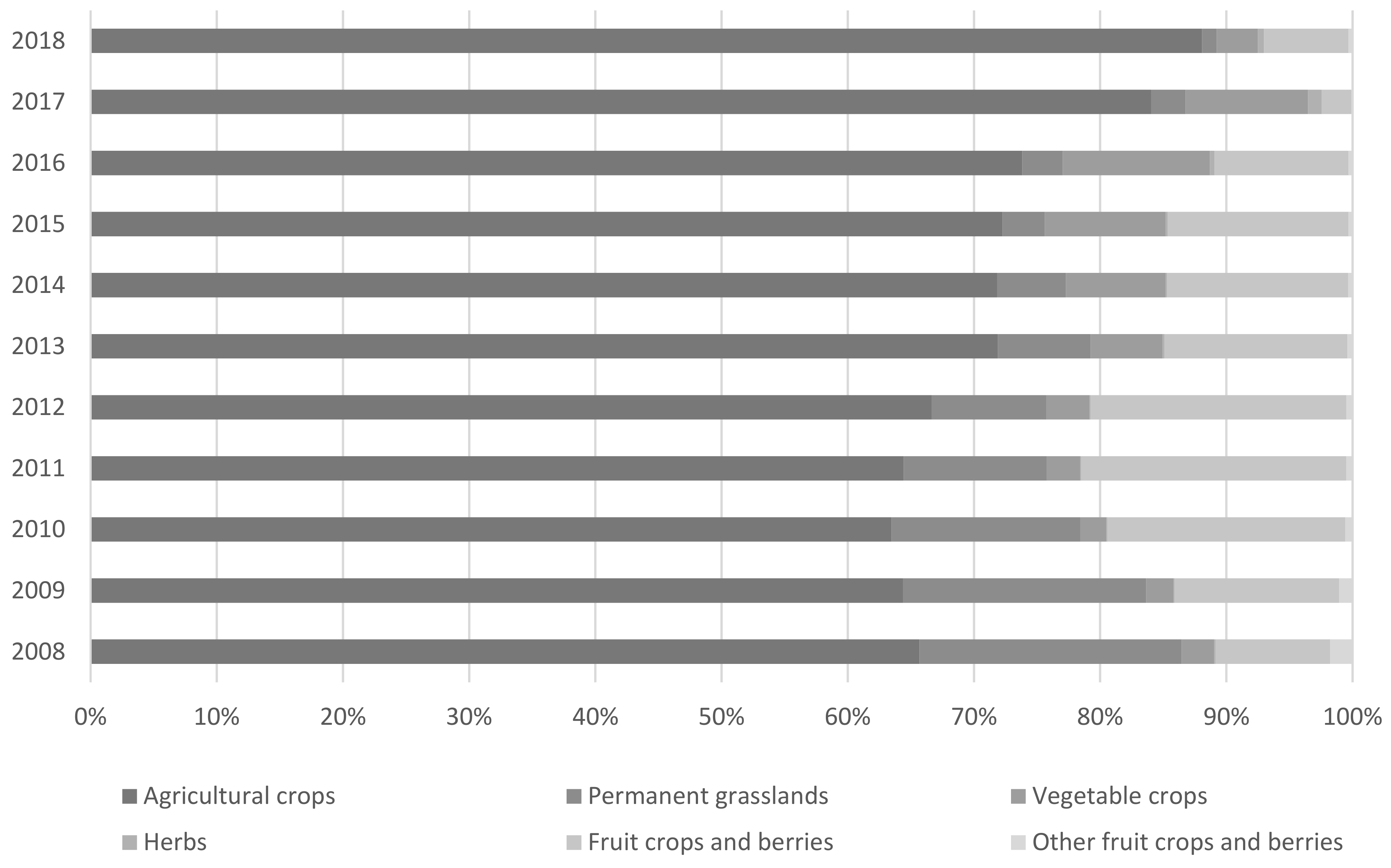